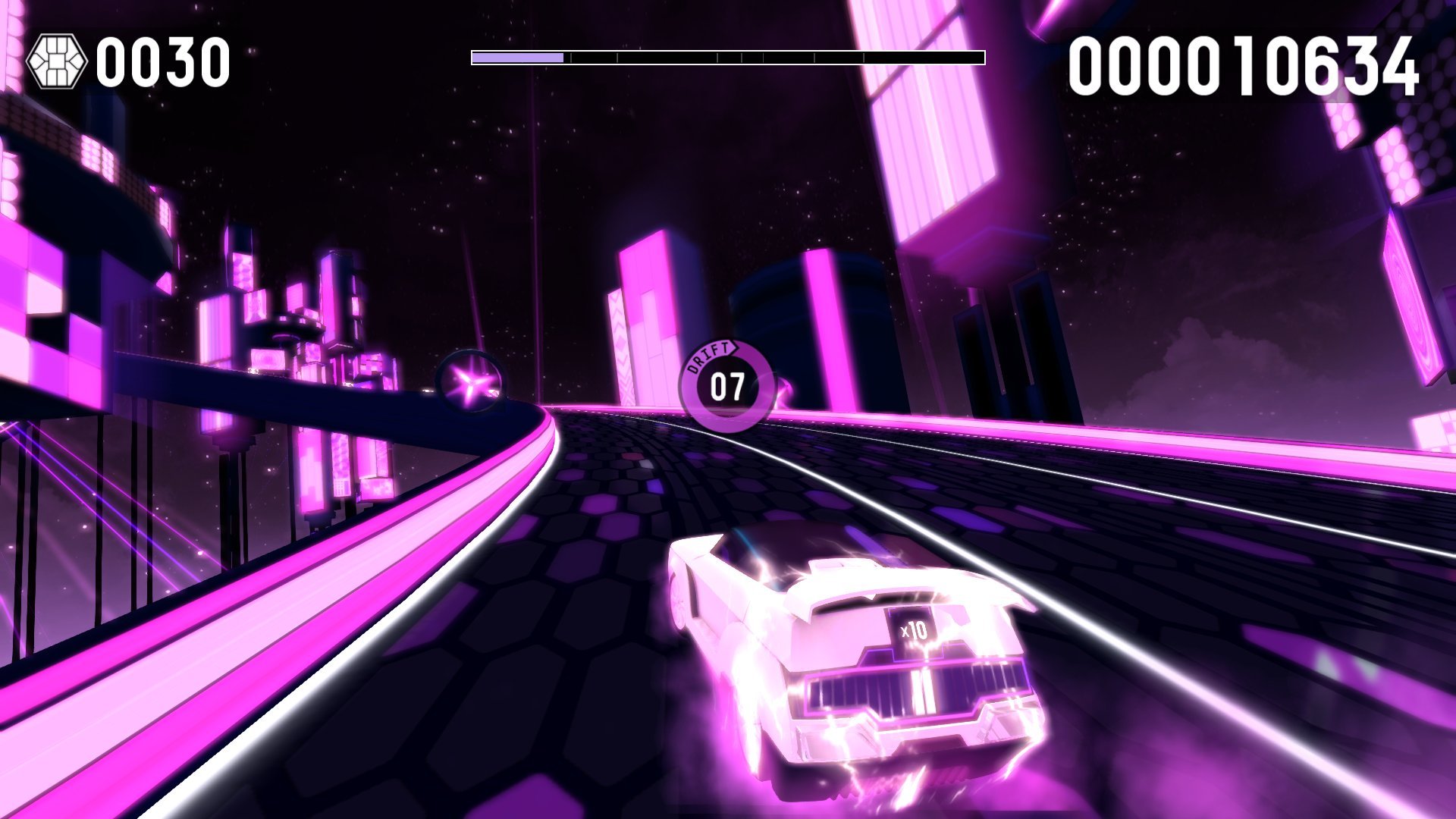 Let’s talk about Riff Racer. Games that revolve around music are not a new concept at all. We’ve all played one, whether it be Guitar Hero, Rock Band, Wii Music, Donkey Konga or something completely different. I enjoy rhythm games such as the ones mentioned above, but I do tend to tire of these games after a while. I’ve pontificated upon this matter at length, and I’ve eventually started to see a pattern.

I’ve found that a recurring flaw within most rhythm games is in fact how repetitive they tend to be – you play through a couple of songs, and the concept remains pretty much the same. The games aren’t bringing much new to the table, and playing them can easily start to get tiresome.

That’s where Riff Racer scores: through innovative gameplay, Riff Racer manages to stay replayable, even after playing for a long time. This game is a rhythm/racing game where the player can race on tracks generated through music. The player may choose a song freely from his computer, and the game will generate a track that fits the song, complete with obstacles, ramps, and pickups to improve the gameplay. Another factor that benefits the l 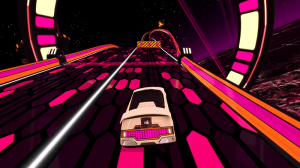 ongevity of the game is the fact that you earn XP points through completing laps, allowing the player to level up and gain benefits from doing so. You can pick up currency on the tracks themselves, which can be spent in the in-game store to purchase vehicles. Your scores can be compared to other players, and you may race against the ghosts of others in order to improve the sensation of truly competing.

The game plays wonderfully, as if it was a mixture of Trackmania and Audiosurf. It is true that the latter has based itself upon the same foundation as Riff Racer, but this one sets itself apart from Audiosurf through the wonderfully playful driving mechanics. The vehicle is capable of boosting, drifting through corners and performing tricks such as barrel rolls in order to improve your score. The game looks beautiful, with a very varied color palette. The procedurally generated tracks make it hard to get tired from repetitiveness, as you’ll always see something new unfold.

Now, Riff Racer has indeed proven itself a positive addition to my library, and to be honest, you have to get quite nitpicky in order to find anything wrong with the game. The game has no major issues, no game-breaking components, and there are just a few things that could have been improved in order to make the game better overall.

The ramps are a cool addition to the tracks, as they help to spice up the game a little. However, I find it difficult to properly coordinate my landing. I often find myself flying off the track because I can’t seem to get a grip on the in-air mechanics. As I said, I’m being quite nitpicky at this point. 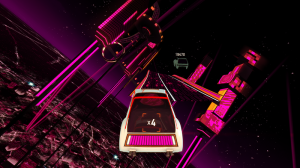 The biggest issue I have with the game is the XP ranking system. While I do commend the game for including such a system, it could use some improvements. The system works as one would expect, you start in rank 0, and you gain XP to level up. However, the rate in which you level up should be a lot more fluid. We’re used to systems where the transition from rank 0 to rank 1 is a fast and easy one, and as you progress through the ranks, it requires more XP to level up. In Riff Racer, however, the transition from rank 0 to rank 1 is tremendously slow, making it rather tiresome to attempt to level up.

Apart from this, Riff Racer has proven itself not only one of the best rhythm games I’ve had the distinctive honor of playing, but also a fantastic game if you’re up late at night looking for a casual gaming experience. The game is highly accessible, and can be played on a wide variety of computers. In fact, I played it on a rather cheap HP PC usually reserved for work, but it ran extremely fluidly. I urge every fan of rhythm games and/or racing games to pick up Riff Racer on Steam, or at least check out some trailers, as it brought me nothing but joy. If the nitpicking issues I picked up on get improvements, this game can count on me coming back to it for a long time.