Pro Evolution Soccer is one of the most difficult franchises to review in all of video games. Its position in the market is pretty much locked in now and forever, and despite the fact that I want to convince new players that this is the best football game available, it just doesn’t have the clout to take a slice out of its competitor’s audience. It’s like if I was trying to convince someone that Pepsi is better than Coke, or Burger King is better than McDonald’s – Pepsi and BK may very well have the better product, but Coke and McDonald’s have the market, and that will never change.

PES has been my go-to football franchise since the PS2, although I will admit to having dipped back into FIFA at the beginning of the current generation of consoles. Since PES 2016, however, I’ve been utterly convinced that Konami’s franchise plays a game of football on a completely different level to FIFA, and it irks me more than a little bit that EA’s grip on the football market is such that FIFA will be around long after PES has gone the way of everything else Konami owns – into exile.

The chief reason for this is one that PES will likely never have a handle of – the licences. Unlike the vast majority of American sports games, the powers that control licensed football teams are not as readily open to sharing. If you’ve ever watched a game of Premier League football on Sky Sports, you’ll probably have seen an EA Sports logo pop up next to the official match clock every now and then. This is because EA Sports sponsors the Premier League. If you can’t see where I’m going with this, and why Konami will never be able to snag licences for the most lucrative league in the world, then you’re probably too distracted looking at all the new official kits on FIFA right now. 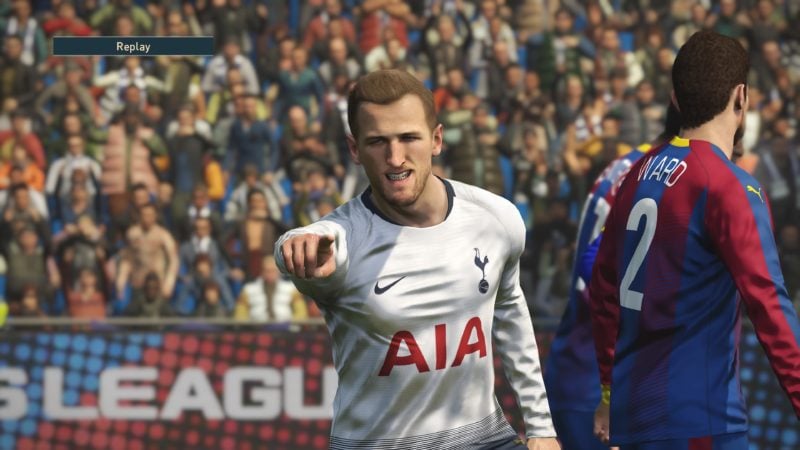 The mandatory first act of any PES player is to download and import proper kits into the game. Stick that up ya, EA!

PES has had to get by on personality over looks for decades, and this year it was dealt an even bigger blow when it lost the licence for the UEFA Champions League competition. Konami, in its defence, went out and bought up a whole bunch of smaller leagues from around Europe in an attempt to shift its target audience. It’s a move that might actually be for the best, too. Snapping up official licences for teams and leagues from places like Portugal, Scotland and Turkey is much more likely to grow the game’s audience in those territories than having a licence for the biggest club competition in European football. That sounds ludicrous, but I’d imagine the average FIFA player probably didn’t know it lacked the Champions League licence before now, especially as all the teams competing in it were officially licensed on FIFA, and not on PES.

I’m About to Kick Off

Any new fans the game reels in this year will be greeted by a fast-paced, fluid and deep game of football that functions on a much more personal level than ever before. Picking out gameplay enhancements on annual sports titles is usually about as difficult as picking out a weak link in the Manchester City team, but this year’s introduction of special player skills changes the game in both a visual and tangible way. It’s a system that implies that Konami are taking a further step toward creating a football game for the more knowledgeable fan, rather than one to please the masses.

There are 39 of these player skills in the game that are doled out to players based on their real-life abilities. Goalscorers like Harry Kane have special abilities including Dipping Shots, Acrobatic Finishing, First-time Shot, and Penalty Specialist, that show a range of ways in which he can find the net and how to best utilise him on the pitch. Other interesting abilities include Neymar’s Malicia, which mirrors his real-life ability to draw fouls and win free kicks (legally or otherwise – I’ve seen the CPU dive to try and win penalties already), Sergio Ramos’ Captaincy and Fighting Spirit, and Javier Hernandez’s Super-sub skill, where he’s actually more effective if you bring him on late in the game.

As you can see, Messi has an abundance of player skills. Danny Welbeck… not so much

These and the rest of the player skills mean that PES retains its arcade-esque tendencies of fast-paced action (with terrible goalkeepers) and high-scoring fun, but carries a real level of almost hidden depth under all the chaos. Lineups can’t just be set to include the quickest players for guaranteed success, and even the best teams can come a cropper if you don’t know how to play to their strengths. There’s a wonderful nerd-level of tactics to the game, and when you factor in the fluid formations (where you can set how your team lines up when both in and out of possession of the ball) and the advanced instructions like False Number 9 and Attacking Full-backs, it really becomes the thinking man’s beautiful game.

Being a PES fan feels almost like an elite underground club at this point, and I’m fine with that.

Of course, imbuing every player in the game with special skills based on real-life abilities isn’t entirely a bed of roses. It will definitely feel restricting when playing as lower-level teams (sorry, Scotland) as only the best and most well-known players will have a large variety of skills, and some teams won’t have a single skill amongst their entire squad. What this means in terms of gameplay is that if you’re to pick a team without a pinpoint crosser, a strong captain or a potent goalscorer, then the game is going to feel almost broken. Scoring goals from crosses in PES 2019 is hard enough with Gareth Bale whipping in corners (expect a buff to attacking headers in the near future; they’re almost impossible), so attempting to create goals from the wide areas as a 1-star team is a fool’s errand.

The performance of the game on the pitch is undoubtedly its strong point, but it’s not perfect. Balancing around the player skills still needs a little work, and it seems like football game fans might as well give up on ever having competent goalkeeper AI at this rate. PES 2019 still runs off the Fox Engine, and this continues to guarantee incredible player-likenesses and smart animations. There’s definitely been a large number added this year to complement the new skills, with shooting and goalkeeping seemingly receptive of the most. It just looks great, even if it can go a little scatty at times, which is to be expected when 22 individual AIs are trying to recreate professional-level tactics and positioning.

It may be a thinking-man’s game, but the ol’ ‘give it to Messi’ tactic also works

You Ain’t Got No Alibi

Where the game doesn’t look, or even sound, that great is basically everywhere off the pitch. Music is probably the most subjective medium in the world, but even the most open-minded person will surely agree that the soundtrack is auditory garbage. Menus haven’t been changed in about five years, and are depressingly vanilla and tired. That doesn’t mean the on-pitch action can’t be let off scot free either. Commentary apparently has myriad new lines added, but has retained all the old, shitty ones. How Jim Beglin keeps getting work is absolutely beyond me. PES 2019 also has a long way to go in catching up to FIFA’s range of celebrations and skills too. The skills are definitely in the game, but my word are they fiddly. Konami clearly put their work into making the game feel like football, but EA has it absolutely nailed-down on how to make their game look like football.

It would be harsh to call PES 2019 barebones, but it has been without the introduction of a new mode for years. Master League used to be the best single-player mode in football games, but it’s become horribly stale. I genuinely can’t pick out a single addition to it from last year’s version. Negotiations for new players – the most fun part of any single player mode – are still utterly baffling and restrictive, too. I had several moves for players, who were rated 3/5 for potentially joining my club, suffer from negotiations breaking down without being given a reason why, and with no option to go back in for a second chance.

MyClub remains Konami’s attempt to steal some of the Ultimate Team thunder, and it will remain thunder-less. It’s still too confusing, with player acquisitions performed via agents and scouts leaving things too much up to chance. There are ways to search for players you want, but the convoluted route to getting your desired star is more than a little off-putting, especially when you factor in the need for managers and the limits they impose on setting up your dream team. You can’t change formations or attacking/defending tactics, so if you’re stuck with a manager whose strategy doesn’t work with your players or preferred play style, you’re basically Unai Emery trying to manage 11 Mesut Özils.

MyClub is unashamedly Ultimate Team-lite, but it’s not terrible. Legend players like David Beckham have been added to the game to spice things up, and once you get your head around the agents, scouts and managers it can be fun to build up a squad and take on the world. In fairness, too, PES 2019 is relatively generous to those starting their first team, dishing out enough chances to sign world-class players to give rookies a chance at being competitive.

It’s without question that PES 2019 is the no-frills alternative to the grandiose spectacle that is FIFA. The game is enjoyed best on a couch alongside a fellow footy-mad mate, against whom you can pit your tactical wits as well as your thumb ability. PES seems content to meander along, living off a superb game engine and an unparalleled level of fun on the pitch. It will never leapfrog FIFA, and this year’s edition feels like an acceptance of that fact. Konami have even made the process of creating kits easier, provided you have a PS4 and can actually download and import them. They can’t give you the real thing, but they sure as hell won’t stop you obtaining it yourself.

PES 2019 is the football game for the tactics book-reading thirty-something, leaving the YouTube generation to go and enjoy their pitch-side selfies with Alex Hunter. Being a PES fan feels almost like an elite underground club at this point, and I’m fine with that. I wish it looked and sounded better in places, and for the love of Glen Hoddle I wish it would let us Westerners play the J-League, but there are very few games I can sit down with a mate and play as repeatedly as this – I just won’t be playing very much by myself.