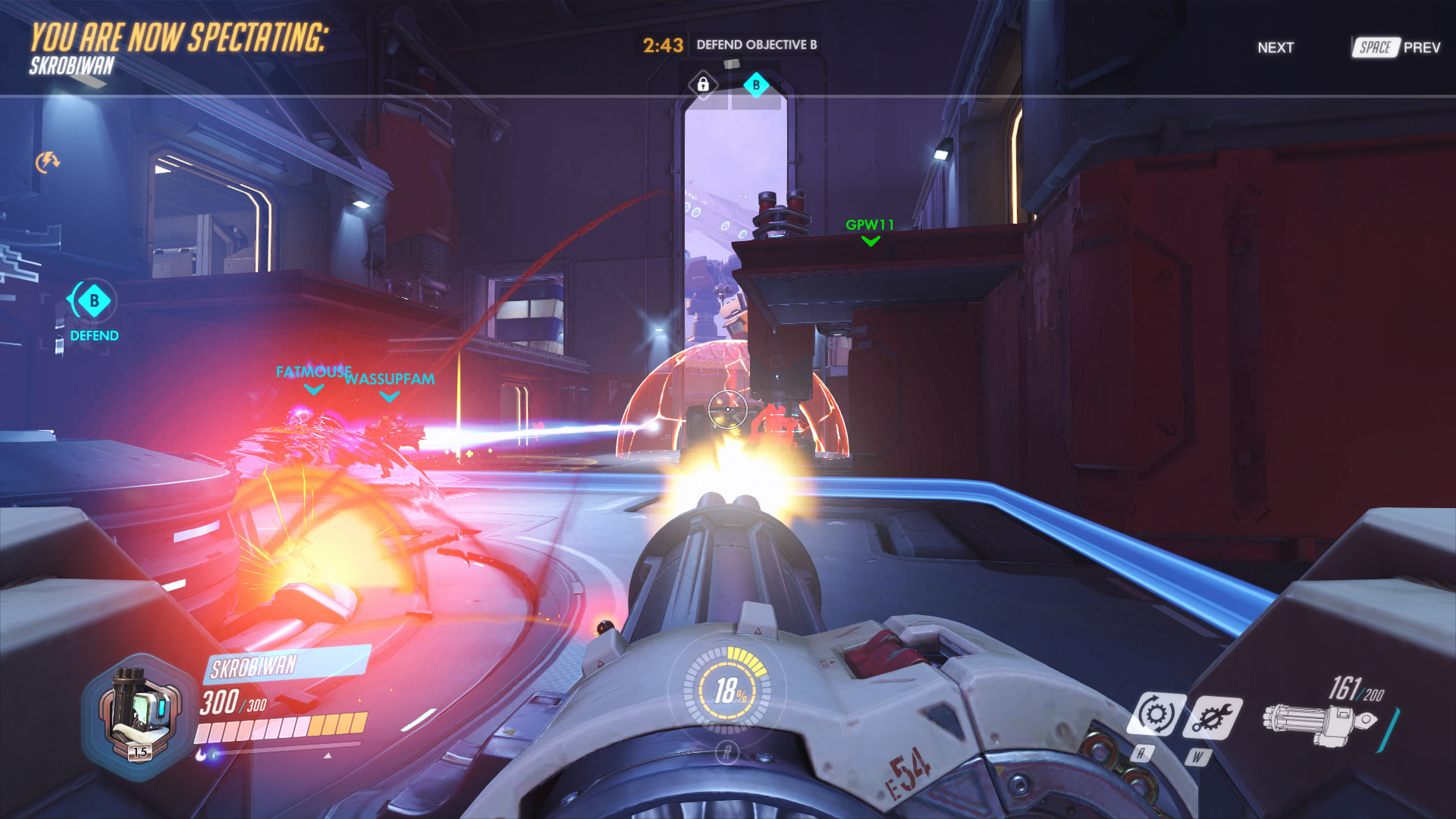 I hated Overwatch. I really did. Right from the start. From the release of the CG trailer that showed off the characters with the visual style and even comedic timing typical of western animation (read: overused to the point of cliche), all the way until release.

I didn’t like the character designs, from the too-obviously brooding Japanese stereotype of Hanzo (not to mention his brother, the robot ninja), to the DJ who shoots soundwaves from his gun and spouts terrible “aren’t I cool?” one-liners while zipping around on his space-age rollerblades, to the cut-rate adolescent power fantasy of Reaper. I hated the music and the cheesy “hero” vibe. I hated the huge character roster that made it seem like yet another game aspiring to appeal to MOBA players. I hated that it appeared to be chasing after Team Fortress 2 in more ways than one (including the frustrating nature of the loot boxes), a game I disliked so much that I stopped playing team-based shooters entirely. (Full disclosure, I was a fan of Team Fortress circa 1998, when it was a mod for Quake, and drew steadily away after Valve got their hands on it.) Overwatch was a game I was ready to ignore for the rest of my life, and not only did I fail to play the open beta, I actively avoided doing so. It was a game I neither wanted nor needed; not from Blizzard, and not from anybody else.

As of this writing, my career profile tells me I’m level 40 and I’ve put 32 hours into the game since launch. I’ve also watched some basic guides on the different characters, watched every animated short Blizzard has released, and read all the promotional comics they’ve produced. I think it’s fair to say that I love Overwatch. 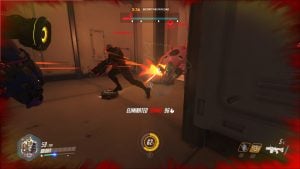 Effective use of skills is not only the key to victory, it’s extremely satisfying.

What the hell happened? A fair question, and one I find myself asking on a regular basis as I continue playing, encouraging my friends to play, and attempting to get better with each of the game’s characters. Digging for the real answers has taken some time, but it may make a better story than a simple survey of the problem.

There were two major things that roused my curiosity regarding Overwatch. Firstly, the new Doom release (one I loved, as did our reviewer at GoombaStomp), which was an incredible amount of fun, but offered a disappointing team-based multiplayer component. Spending so much time with such a fast and furious shooter of the old school made me yearn for my PlanetQuake days, when we deathmatched every Friday for years. I haven’t had a regular shooter or group to play it with for well over a decade, not since Quake 3, and the experience of playing Doom made me long for it again. Most modern shooters have repelled me on a variety of levels, either thematic, mechanical, or both.

The second reason for my curiosity about Overwatch was simply how much positivity surrounded it. Within the gaming public at large, sure; that seemed reasonable given its incredibly accessible exterior, with cute, Pixar-like characters, colorful visuals, and Blizzard pedigree. But everyone I knew that was playing Doom and having a great time was also talking about Overwatch in terms that can only be described as gushing. Not knowing why was killing me. 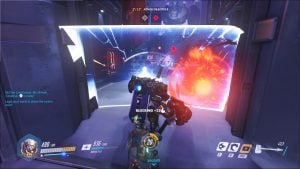 Learning how to use all the characters properly is a rewarding, if lengthy, endeavor.

As a games writer and an editor who has worked for several different games outlets over the years, curiosity is something that frequently compels me to play games I have no personal interest in playing for entertainment. I’ve played Call of Duty games even though I hate them, struggled through real-time strategy games that weren’t exactly my cup of tea, and put up with all manner of mechanics in Japanese RPGs that drove me nuts. Usually I was there for the spectacle, or because there was something a particular game did with such joie de vivre that I had to witness it for myself. While I rarely play such games to completion, I have many times felt that if the opportunity arose to touch them, even if only for a short while, it was an opportunity worth taking.

And so with Overwatch. My curiosity overtook me, and I started watching some streams of the game. I still wasn’t sold. It looked slow, methodical. There was all that time spent running back to objectives after death, waiting around the character select screen, waiting for the match to start. Watching people play it on consoles was even worse, as there’s nothing a competitive FPS veteran hates more than the imprecise movements of a controller.

When the opportunity to actually play Overwatch presented itself again, I took it. Not knowing wasn’t going to cut it. I had to see for myself why people were loving the game so much when it seemed to be doing everything in its power to repel me, someone who ostensibly resided in its target demographic. Other unanswered questions seemed to be riding on this as well: had my inability to truly engage with modern multiplayer shooters been because of fundamental changes in the genre that would forever keep me away, or had I just not found the right one? 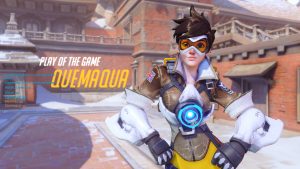 “Play of the Game” still needs tweaks to weight kills a bit less, but it’s fun to see your name in lights.

While the game downloaded, I went back to watch the original trailer, and also to watch the other character trailers that I’d missed. They still didn’t appeal to me stylistically, though I could appreciate the artistry, but in looking at them from a more mechanical perspective I started to see the potential for interesting differences in the characters. Once I got into the game, the distinctness of each became readily apparent.

So did the fact that I liked the game. It wasn’t more than a few matches in that I decided people were on to something, and not more than a few hours later that I felt I had a pretty good idea what. While the game doesn’t move like Quake, and characters individually tend to feel slow, all the emphasis is on positioning and playing to the strengths of a chosen character by using their skills effectively.

And yes, I know, that sounds like most class-based shooters—but the characters here make a huge part of the difference. Despite a couple of less-than-thrilling designs, there isn’t a single one that doesn’t feel viable and unique.

While McCree, Hanzo, and Widowmaker all require players to aim well, Hanzo’s arrow-sniping feels very different from using Widowmaker’s scope, and though McCree can do a sort of sniping of his own, and isn’t a front-line character, his ability to stun, rapidly unload his six-shooter, and get a quick reload makes him a more formidable enemy up close than either of the other two. Winston and Roadhog are both big tank characters, but Winston can leap around the map at will, and his lightning gun hits everything in a short radius for low damage, while Roadhog is a big oaf with a shotgun that drags people into his best range using a hook. Space doesn’t permit me to go on at length about these interesting comparisons for all the characters (there are 21 of them, after all), but suffice it to say that each feels different even from other characters that fill a general role like “tank” or “support”. 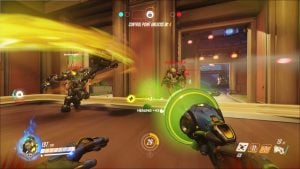 Even the support characters are tons of fun to play, with 3 healers that all feel decidedly different.

Despite this, the game doesn’t feel like it’s chasing the MOBA ideal as hard as I thought it was. This is still a shooter, and one that both requires and rewards skill with more than a handful of individual characters. This isn’t about quantity over quality, choosing based purely on cosmetics, or about focusing in on a favorite. You’re less likely to have a “main” if you want to stay competitive, as you need to learn enough characters to be versatile, and there isn’t much overlap between them. While I still suck with a few, at this point I feel like I can readily fill any needed role on a team, even if I have to switch characters several times in the middle of a match.

Yet what’s amazed me most is how satisfying the game is. Losing to a well-organized team that completely stomps your own is just as un-fun here as in any other game of the same type, but a fight that’s even moderately well-matched always feels fantastic, win or lose. Battles are special because one doesn’t just go up against a few other classes, but against a huge cast of characters with personalities and styles all their own. The characters never leave center stage even with such an abundance of tactical options. When you’re flying around with your jetpack and hassling enemy positions, you feel like Pharah, not just a collection of skills representing a more mobile unit choice. The constant commentary and banter from the characters helps this as well. 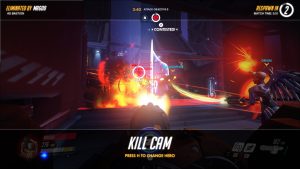 Get used to watching how you died while you wait to respawn. It’s entertaining at times, but mostly instructive.

Ultimately, learning how to enjoy Overwatch was, at least for me, a lesson in pushing past my own prejudices. I had many of them at the outset, and all of them told me that this was a game I should avoid; yet here I am, having an incredible time jumping into random pickup groups and playing with several of my friends. I’ve even come to enjoy a fair bit of what once initially put me off. I still don’t love the music, and I’m less fond of a couple of the characters, but I learned how to play those characters and can now both appreciate what makes them fun and play them in matches where their skills are most useful.

Games don’t always have an easy time overcoming prejudice. In a world of vitriolic fandom that often demands every franchise be tailored to their exact specifications, it can be hard for them to overcome barriers of perception. But we know they do. Demon’s Souls, and of course Dark Souls after it, often met with incredulity from players and critics who felt the difficulty was an unwelcome gimmick, and yet many people changed their tune after spending enough time with the games. I managed to change mine with Overwatch, and it’s not the first time I’ve had to do it with a Blizzard game, though perhaps it was the biggest uphill climb (I wasn’t fond of Hearthstone at first, either, but getting me to play cards is generally an easier proposition).

But while Overwatch isn’t likely to have those sorts of barriers for most people at the marketing level, given its wide appeal, it might run into problems with frustration, depending on how well the matchmaking ends up working for new players. Overwatch is, for all its color and cuteness, a tough game with a community of tough opponents, and there’s a lot to learn before new players will feel properly up to speed. For those people, the prejudicial difficulties may arise after losing for the 25th time and being tempted to say, “Man, this game just sucks!”