When you have a series as successful as the Pokemon franchise, the temptation to keep things stagnant might well become overwhelming, especially as none of Pokemon games have ever lacked for sales or a positive critical reception.

However, even long successful franchises like Call of Duty and Assassin’s Creed are seeing reasons to make changes that count in order to benefit their core games and their fans alike, and it seems Pokemon is no different.

The long-awaited Pokemon Sun (half of the latest Pokemon release, with Pokemon Moon being its fraternal twin) bucks this trend dramatically by shaking up the series in many bold and inspiring ways. 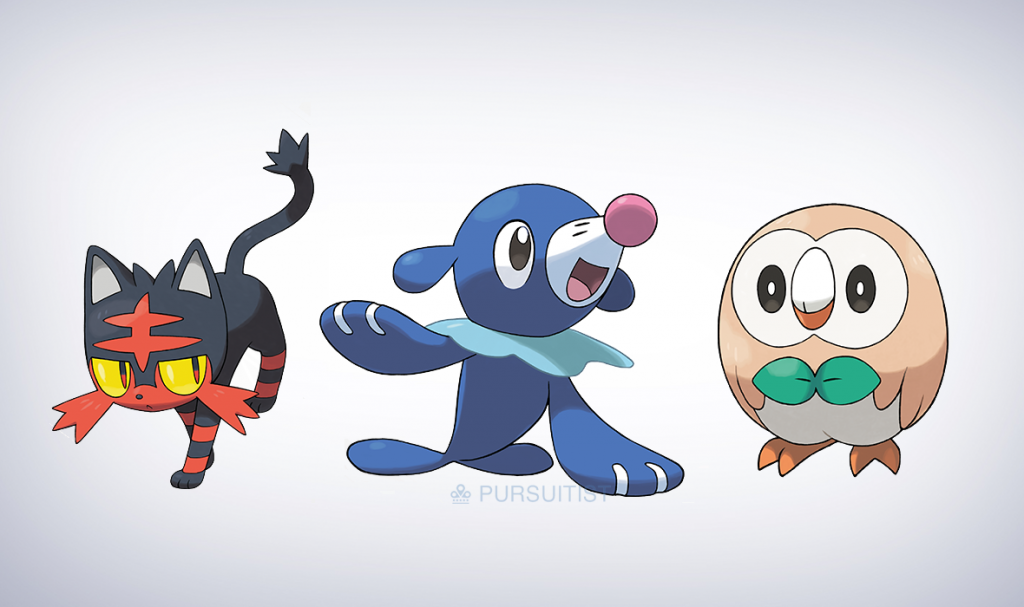 These are Pokemon Sun’s starters, and you better believe I picked that sweet ass cat. Just look at him, he is taking guff from no one.

One of the first that players will encounter is the RotomDex, a new feature which allows a Rotom to inhabit a bio-mechanical suit and take the place of the bottom screen of the 3DS. This not only allows the Rotom to display useful information like maps and nearby goals but also allows it to become a kind of Meowth-like character in relation to the Pokemon animated series, providing comic relief and exposition at regular intervals.

Since you don’t ever have to stop your gameplay to take in these exchanges, they’re a welcome addition and a great change of pace for a series with a silent protagonist.

Another worthwhile new addition is the effectiveness indicator. If you’re something of a lapsed Pokemon player (like this reviewer, for example) then you might not recall how each of the rock/paper/scissors based classes effect one another offhand. Luckily the new effectiveness indicator shows you how your moves will effect enemies before you use them, making for a lot less wasted turns and knocked-out Pokemon. 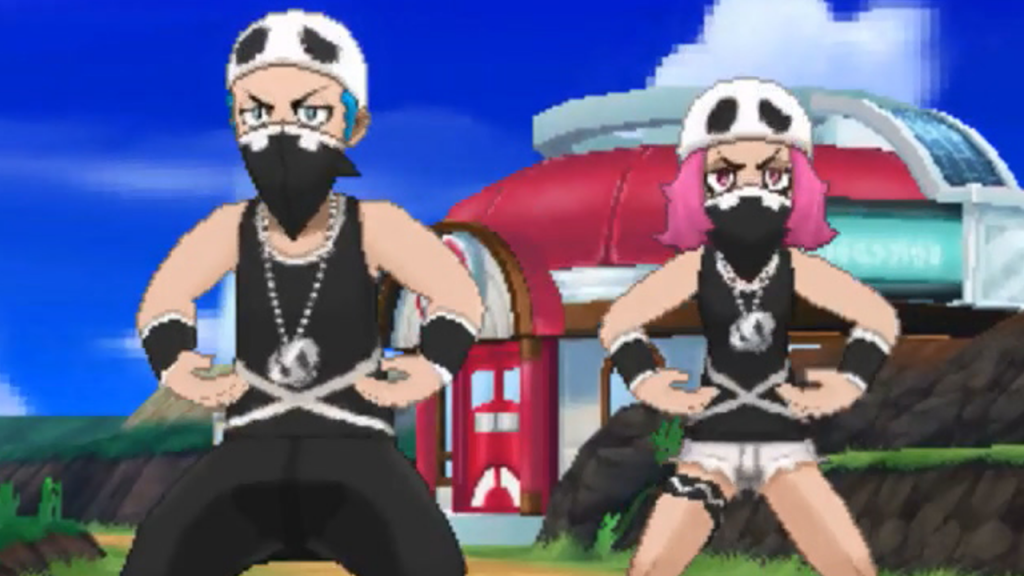 Team Skull are thoroughly light and always entertaining, and their theme music will make you perk up every time they pop in.

Game Freak obviously realized that a lot of players would likely be picking up Pokemon for the first time in a good, long while with Pokemon Sun (due to the highly publicized, nostalgia-laden success of Pokemon GO!) and, as such, have made it easier than ever for folks who may have missed an entry or two to get back in the swing of things without feeling out of sorts.

Finally, the Festival Plaza is absolutely worth a mention, as it’s going to be your go-to place for online functionality. That includes meeting up with other trainers who can benefit your experience (NPCs and real-world players alike), boosting up your team, and sometimes just unwinding from your main quest with a mission or two.

Of course the real feature that everyone is excited about is the advent of Z Moves. Much like limit breaks from the Final Fantasy series, Z Moves allow trainers to focus their emotions with their Pokemon of choice in order to create a super move that will decimate their opponent. Since this move can only be used a single time in each battle, it creates a strategic element in which players must decide when and how to make use of this new advantage. 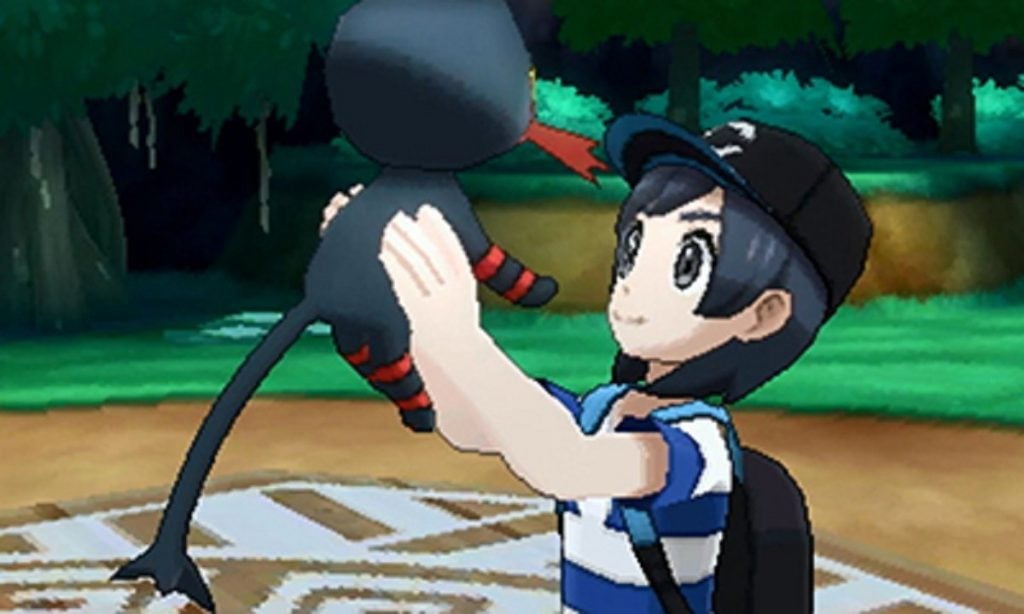 Pokemon Sun is by far the closest the series has come to emulating the look and feel of its anime counterpart.

But enough about new features and new additions. Anyone who follows this series likely knows the lion’s share of this kind of information anyway, and what they want to know isn’t how to turn Exeggutor into a walking Siamese palm tree but how the main quest stacks up against its progenitors.

Well that’s a bit to unpack in and of itself, as this is a much different adventure than you’re probably used to, whether you’re a lapsed player or a series fanatic. For one thing, there are no more gyms or gym badges. In their place are trials, unique challenges that test your skill as a trainer. These are followed by a battle with a Kahuna, an elite Pokemon master who represents a certain region of one of the four islands. In principle it probably doesn’t sound much different from what you’re used to with previous titles but in practice it’s quite a change of pace.

Another switcheroo on the old formula comes in the form of your rival, another longstanding Pokemon tradition. Here Pokemon Sun subverts expectations once again by having your rival be incredibly friendly, almost absurdly so. Indeed he is a regular fixture throughout your adventure and is ever present as are a couple of other NPCs who regularly turn up to give the story a bit more characterization and meaningful dialogue.

Z Moves: If you’re going to steal from Final Fantasy, you might as well steal the good parts.

In the token villain department, the tone is lightened in turn with Team Skull. Imagine your grandparents’ idea of an evil crew of rappers, and you pretty much get the picture. There is absolutely no reason to take these guys seriously, and they offer up some of Sun‘s funniest moments, even if they’re use of certain cultural appropriations might make you raise the occasional eyebrow.

In the A/V department, the game both looks and sounds great. The music is catchy and fits the light and easy tone of this entry astutely, while the eye-popping visuals will make you reconsider everything you thought you could expect from a Pokemon game. Seriously, when a 3DS game can wow you with this kind of gorgeous animation in the age of the PS4 and Xbox One, it’s truly something to be proud of.

The long and short of it is this: if you’re a longstanding Pokemon fan then you absolutely won’t be disappointed with this entry as it mixes things up enough to really refresh the series staples and boasts a huge cast of both old and new Pokemon alike to catch and tame. 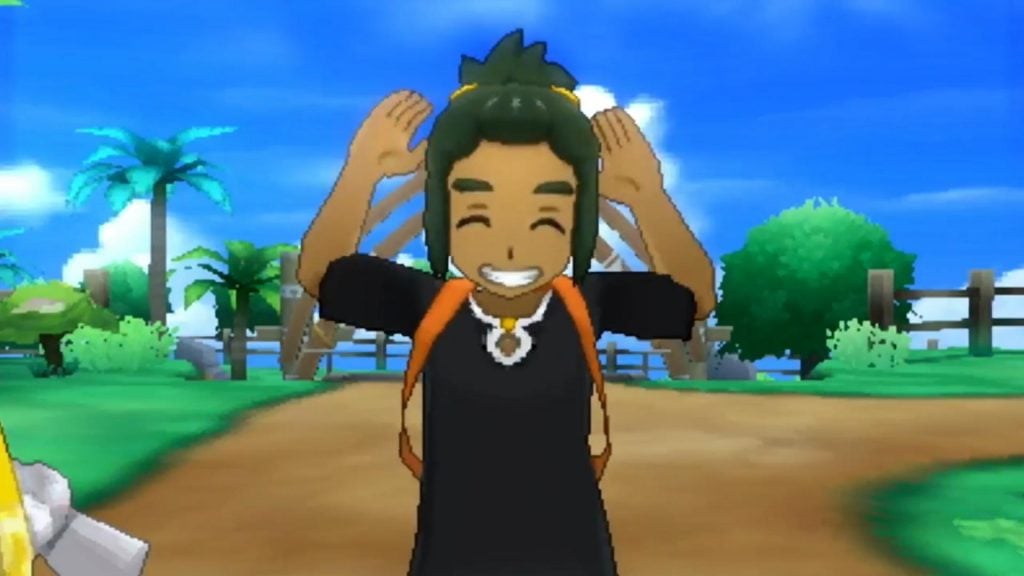 This is my rival? How am I supposed to hate this guy!?

If you’re an out of touch, or even all new, player then this is the perfect time to jump back in. The user interface and design of Pokemon has never been more friendly to a rookie or a newcomer than it is in Pokemon Sun.

Game Freak have truly outdone themselves with Pokemon Sun and for anyone who might’ve been on the fence about squeezing a new Pokemon adventure into their likely already packed gaming schedules, let me assure you it’s absolutely worth your time.