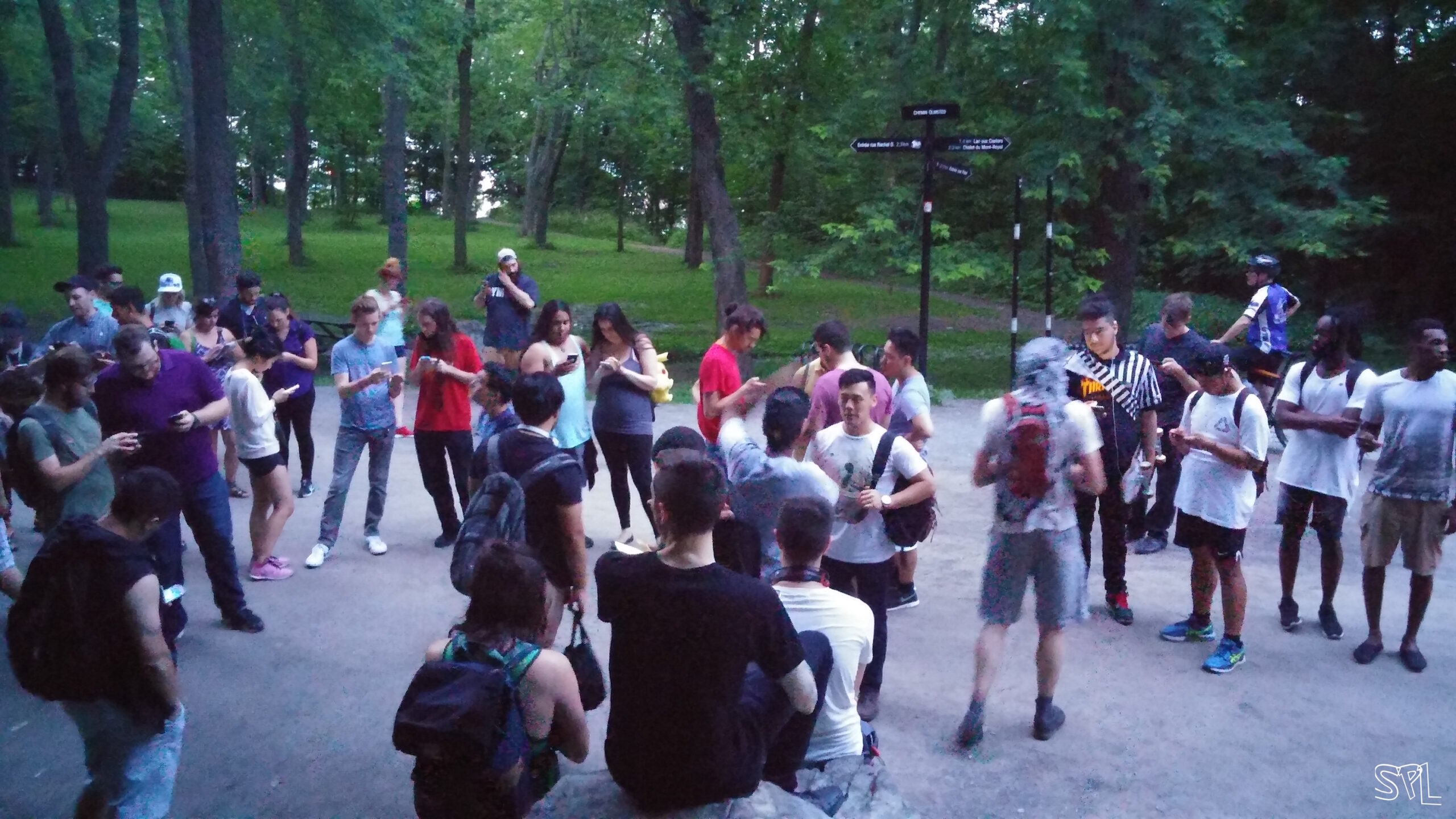 Pokémon Go has taken the world by storm. The GPS-based mobile game is slowly becoming one of the most popular apps of the moment, surpassing many others in both numbers of downloads and daily usage. While it has only been released in select countries, many have found a way around that little inconvenience, including us Canadians. As a result, the chart-topping new app has seen wide popularity even here in Montreal. I have had the app for only a week, and I have already encountered tons of fellow Montrealers pursuing Pokémon and challenging Gyms. An old man even stopped me on a busy street to ask if I was playing Pokémon!

Produced by Niantic, the creators of the mobile game Ingress, Pokémon Go is simple enough; players traverse the virtual world by moving about in the real one, encountering wild Pokémon they can catch and interacting with PokéStops to gain items. Upon reaching level 5, players choose to join Team Instinct (yellow), Team Mystic (blue), or Team Valor (red), and can battle to gain control over Gyms. As with Ingress, Go is not unlike a giant game of Capture the Flag – just with more Pocket Monsters. Naturally, a few Montreal Pokémon Go Facebook groups had already sprung up just a few days after its release. As a lifelong Pokémon fan, I immediately started following a number of them to connect with fellow players and share tips and jokes. On July 11, I discovered one group was organizing a real-life meet-up for all Go players the very next day. I had to get in on the action.

As an Ingress player, I had already attended a handful of local meet-ups for the game, and thus had a rough idea of what to expect. The monthly Montreal Ingress events (called First Saturdays, taking place the first Saturday of every month) often drew a crowd of about 40 people or so, but this meet-up was already promising to be larger.

The plan was to meet at a downtown subway station on July 12 at 7:30pm and depart for Mont Royal at 8:00. Once underground, I met another person playing Pokémon Go by complete coincidence, who had been completely unaware of the meet-up. I encouraged him to join me; the group was not hard to find, as we immediately spotted ten or so people on their phones in the sweltering metro station. Cédric, one of the Facebook group admins whom I had spoken with in advance, welcomed me and informed me that most people had gone up to wait on street level. I joined a few people heading up the escalator, happy to escape the heat of the metro. It was beautiful outside when we emerged, the heat of the day having died down somewhat. Before us was a crowd of people swathed in Pokémon memorabilia, all glued to their phones. Despite being fairly active in the local Pokémon community, I didn’t recognize anyone there, so I began approaching random groups and making small talk. We were about 50-60 people in total, and the crowd was comprised mostly of young adults in their 20’s and was predominantly white and male. Most people were easy to converse with and wanted to meet new people, and unlikely groups of friends quickly formed. One of the event organizers walked around distributing small, circular stickers in different colours, so we could each wear a sticker corresponding with our team colour.

Around 8:00pm we headed out and began our trek through downtown Montreal. It was amazing witnessing this dense pack of young people slowly shuffling onwards, phones out, as passers-by stared and snapped photos. The meet-up was so huge we frequently got divided at traffic lights, but we always waiting for the rest of the group to catch up. Every so often, people cried out with excitement as they spotted new or rare Pokémon, which everyone then stopped to catch. We soon arrived at the base of Mont Royal, a huge grassy expanse lined with paths crossing every which way. At this point, we had to stop for a group photo to document the huge gathering before us. The organizers and photographers climbed atop a pyramid of picnic benches and began directing the group to split up based on the three teams. We got in a few great, if cheesy, photos before getting back on the path leading up the forested mountain. The ascend started off easily enough, sloping gently upwards at a smooth incline. We could continue playing as we walked, and one person starting to blast Pokémon music from his phone. We soon reached a plateau at a wide gravel road and continued forward. It was only once we reached the staircase leading to the summit that we stopped because we had reached a Pokémon Gym! At this point, all three teams began vying for the Gym, and the spot’s alignment constantly changed from red to blue to yellow over and over again. We paused there for a good 5-10 minutes, fighting constantly until a few people started making their way up the stairs – presumably because their team had gained control of the Gym, and they wanted to keep it that way. The group begrudgingly joined the ascent, continuously battling for the Gym until we were out of range. The climb was tough, and the staircase felt never-ending, but we kept going, and some people even managed to keep playing in spite of their exhaustion. Finally, we made it to the lookout at the top of Mont Royal. A few people headed into the chalet to charge their dying phones, while others discovered another Gym to battle for, and the rest went to hunt for Pokémon and admire the view of the city. We remained here for the next couple of hours, playing the game and chatting as the sky darkened and Montreal lit up before us. It was amazing playing with and getting to know fellow Montreal Pokémon fans, and everyone was friendly and happy to share tips and tricks.

The crowd began to thin as it got later and phones began running out of juice, and eventually, those of us remaining finally called it a night at 11:00pm – it was a weekday, after all. Getting back down the mountain was an adventure on its own, but as we reached the bottom and parted ways, I couldn’t help but wish the day could go on and on. The Montreal meet-up was a truly wonderful experience. Pokémon Go not only encourages players to explore their city, but also to meet new people and make friends as they discover the game together. Montreal has a truly vibrant Pokémon Go community full of friendly people, and it will surely continue to grow once the game officially launches in Canada. If you ever have the opportunity to join a Pokémon Go meet-up, be sure to bring good shoes, water, and a portable battery pack for your phone, and get ready to have a good time.

The next Montreal Pokémon Go meet-up will be on August 7 at 12:00pm outside of the Palais des Congres. It takes place during Pokéthon, a Pokémon sub-event at Otakuthon, in conjunction with The Silph Road, a grassroots Reddit community.