Of the roughly fifteen games Nintendo developed for the Wii U, perhaps none are as mistakenly overlooked as Pikmin 3. Of course, it’s not surprising that an underperforming entry of a niche franchise on a flailing console failed to set the world on fire. Yet while other AA Wii U games such as Captain Toad: Treasure Tracker and Donkey Kong: Tropical Freeze have been given a second life on the Switch, it remains unclear if Pikmin 3 will ever see the light of day again. Meanwhile, the fate of the franchise is equally unknown, despite series creator Shigeru Miyamoto famously stating development was near completion years ago. In honor of this underappreciated gem and the series devotees who were strung high and dry at yet another E3, I will be harnessing 100/100 of my analytical prowess to burrow into Pikmin 3’s design level-by-level. In this entry, I will take a look at the game’s fifth and final course, the Formidable Oak. 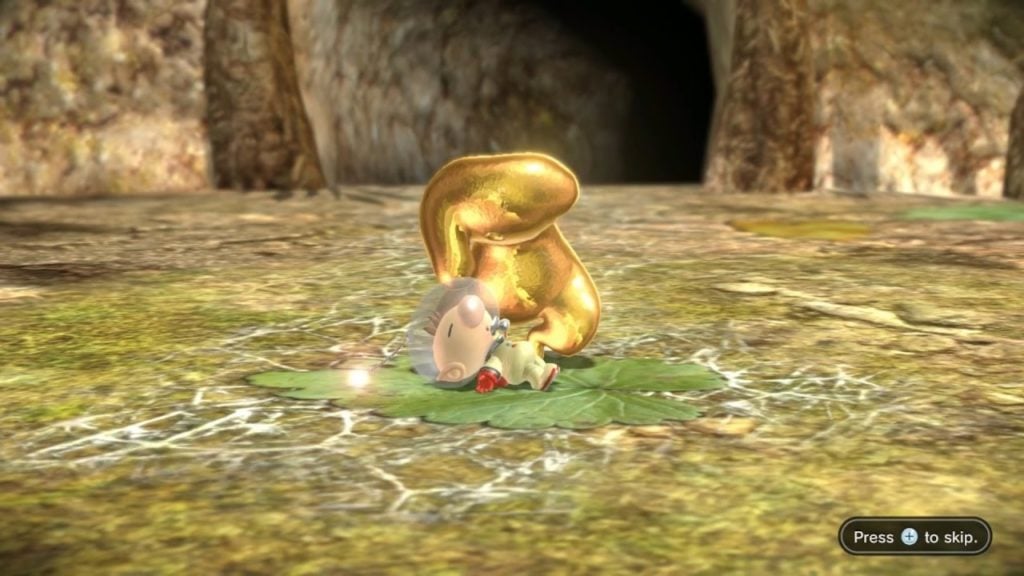 After rescuing Louie from the Quaggled Mireclops in the Garden of Hope, the crew traces a final signal to the Formidable Oak, where they hope to find Olimar and the Cosmic-Drive Key. There, a golden blob chases the trio through a maze and then battles them for Olimar. Upon defeating the blob, the crew save Louie and Olimar and finally find their ticket back home. It’s a straightforward ending to a straightforward story that doesn’t add or detract much from the level as a whole. 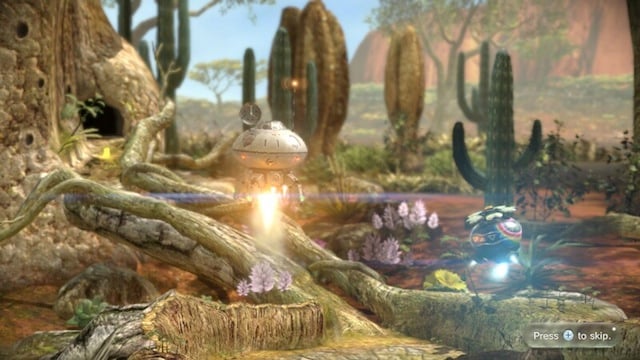 The Formidable Oak exists in a land covered by cacti and succulents, evocative of the American Southwest and Saguaro National Park in particular. Unfortunately, the level takes place almost entirely in a cave, never feeling remotely connected to the surrounding desert or the termite’s nest it takes place within. The layout is the most labyrinthine and condensed in the game, often feeling like a typical Pikmin 3 level trimmed down to its bare essentials: a start, a finish, and a path connecting the two with opportunities to create shortcuts. Despite its comparative simplicity it works well in the context of being chased by the area’s boss, as it drives the player forward at a quick pace and forces them to deal with obstacles and enemies in a particularly efficient manner. Though it is also possible to just loop the golden blob in circles at the very beginning by leaving one crew member behind to watch over Olimar, a viable strategy that sometimes fails because the character about to be swallowed whole doesn’t express their concern until too late. This can result in having to replay the level again from the start, which is never ideal, especially in a level as linear as this.

The main themes at play here are caves and culmination. Numerous aspects of cave design make their final appearance, from mazy layout, to dim lighting, to tight corridors. And while this cave design enables taut climactic gameplay befitting a final stage, it is at bizarre odds with its desert setting, which it never remotely indulges. That said, this final gauntlet is a clever way to test all the core skills the player has refined along their journey, from switching between crew members, to battling a wide array of enemies, to utilizing each type of Pikmin to tackle Pikmin-specific obstacles. Its layout and design succeed in providing the sense of climax and culmination they strive for, even if foreknowledge of the cave layout dramatically changes the way the player confronts the final level, allowing them to effectively find the quickest path forward and pass the level with ease. 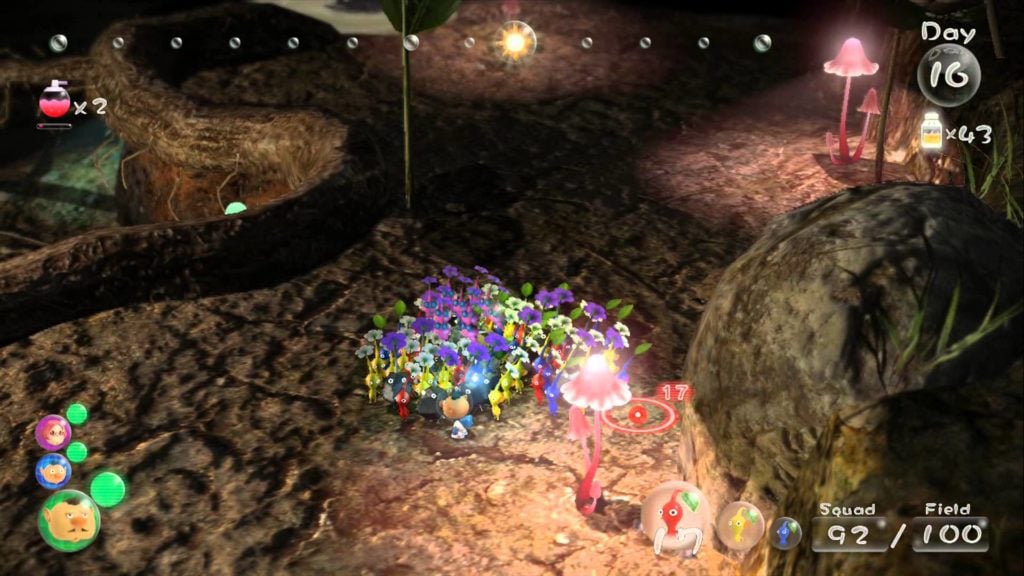 The enemies in the Formidable Oak are largely reused from past levels, which makes sense given the hasty speed at which many players will feel compelled to progress. By reusing enemies and obstacles the player is already familiar with, it allows for on-the-fly strategizing that new enemies and obstacles could not, which is essential in a time-sensitive run like this. The only two new enemies are the Watery Blowhog and the Shearwig, and though both are cinches, they can still throw the player for a loop precisely because the player has never run across them before. Throwing a bunch of Red Pikmin at a Watery Blowhog is a tough way to learn a lesson about careful observation the game seems to sometimes value and other times not. It is also worth noting that all of these enemies, outside of one Nectarous Dandelfly, are illusions created by the area’s boss. This is a smart move since allowing players to gather bodies would seem entirely out of place given the dire circumstances, and it would have likely led to frustration controlling Pikmin in some of the tighter corridors. 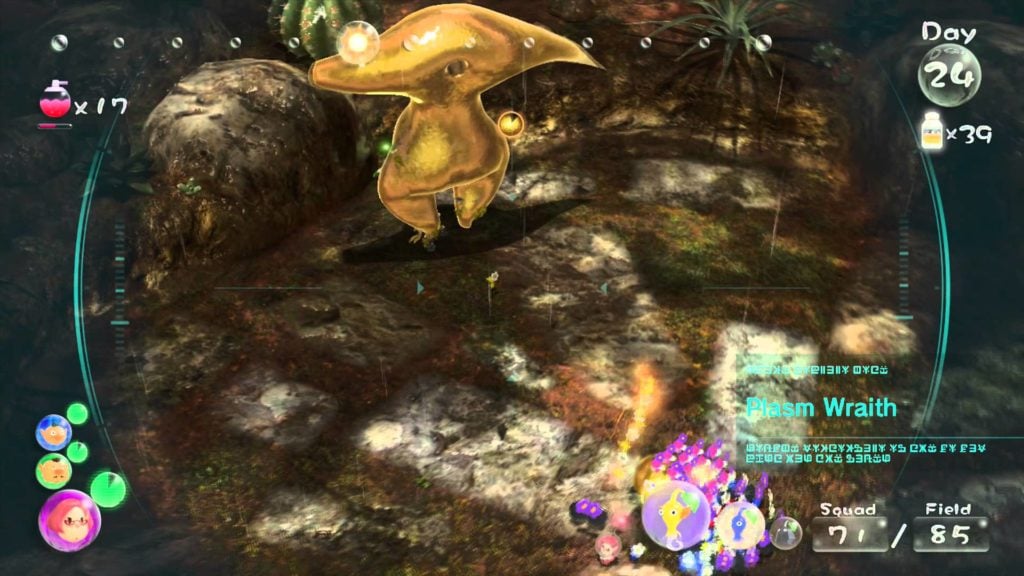 The golden blob that chases Olimar throughout the cave turns out to be the area’s boss, the Plasm Wraith. Fitting in to the theme of culmination, this boss splits into smaller randomized pieces that can be attacked with a specific Pikmin type, meaning that each Pikmin type plays a role in the final battle. Like the best bosses in the game, there are a couple of possible strategies: the player can carefully target these smaller pieces or they can relentlessly barrage the boss. Either strategy is viable, though reckless players can expect to lose Pikmin in droves. It’s a clever concept, but Pikmin 2 arguably executes on it better, ending the game with a more intricate boss that similarly emphasizes using a wide range of Pikmin types. Indeed, this battle can get a little sloppy at times, perhaps because it is a little bit too fast and aggressive for the contemplative strategic nature of the series. The boss’ gelatinous alien look is also out of place and uninspired. Something in keeping with the game’s naturalistic setting, like a chameleon, could have been a better aesthetic fit and probably enable a more enjoyable battle. Or, taking a page from Pikmin 2, the boss could have been mechanical, emphasizing the environmental messaging the game uses for narrative scaffolding. Instead, this shape-shifting yellow Jell-O detracts from world-building and raises more questions than it answers. 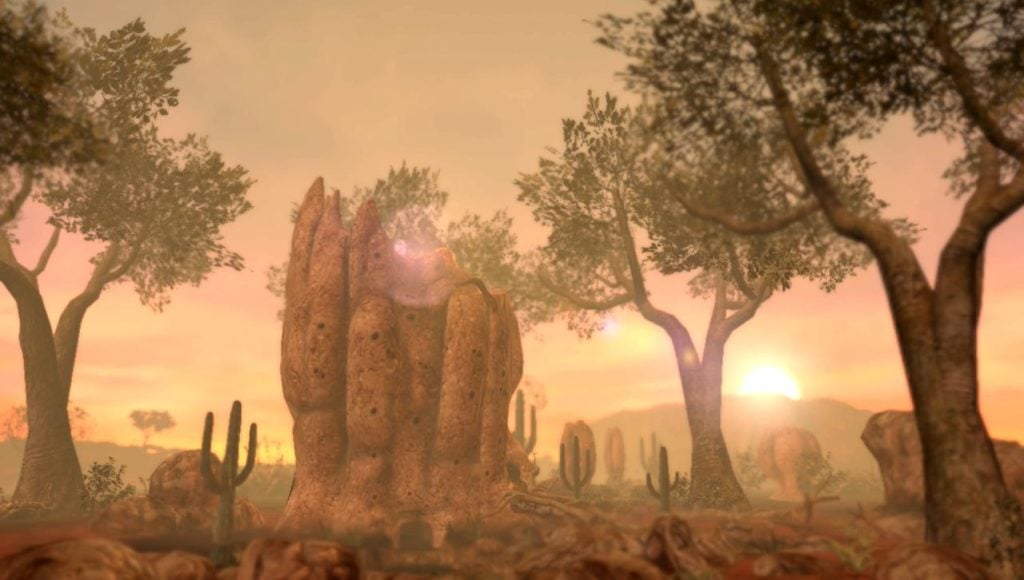 As a whole, the Formidable Oak largely accomplishes what it sets out to do. It is oppressive, tightly wound, and a hefty final push. And while it largely delivers as an experience, it often feels less cohesive than it could have been with some relatively minor changes. The surrounding world, the cave the player plays in, the general tone, and the boss all often seem at odds with each other, and at odds with the game’s ethos as a whole. It’s a somewhat conventional final level experience for a game that largely bucks convention, so even though it succeeds in its aspirations, those aspirations are conspicuous. In some regards, the ways in which the level stumbles are indicative of some of the game’s larger issues: A lack of narrative oomph, stylistic mismatching, combat that gets messy once the going gets tough. But at the same time, the Formidable Oak succeeds at being a one-of-a-kind level in a one-of-a-kind series. At its best it offers some of the most evocative and experimental gameplay in the game, and it provides a hint at what future games in the franchise might look like should they choose to ditch some of the design standards that hold the series back.