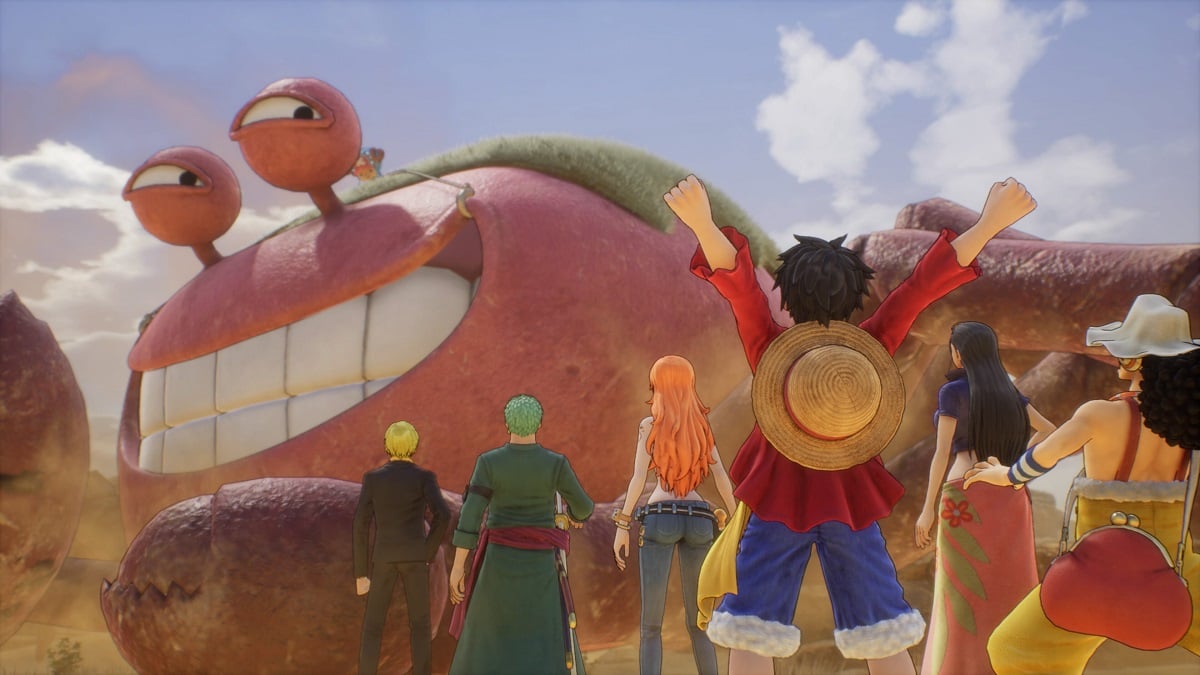 Games based on anime are notorious for two things: being arena fighter Musou games and retreading the source material. So when Bandai Namco announced that the new One Piece game would be a full-fledged JRPG with an original story written by Eiichiro Oda himself, it sparked interest throughout the entire fandom. Thankfully, developer ILCA has largely managed to deliver an engaging adventure for fans and JRPG enthusiasts alike. Despite some rough edges, One Piece Odyssey stands out as one of the best games based on an anime in recent memory.

The story takes place right after the Dressrosa arc, which ended eight years ago in the manga and seven years ago in the anime. The Straw Hat Pirates are sailing along when they suddenly get hit by the Knock Up Stream and flung into the air. To avoid a ship-shattering crash, Franky lets off a Coup De Burst and sends the Thousand Sunny flying away to an unknown island. Shipwrecked, confused, and missing crewmates, the group eventually runs into a shy girl named Lim who steals away their powers and scatters them around the island as cubes under the assumption that they’re evil pirates. Now weak and at the mercy of Lim and a mysterious explorer named Adio, the Straw Hats must work together to defeat the island guardians guarding their powers, recover their strength, and set sail once again.

Though some fans may be upset that Odyssey’s version of the crew isn’t up-to-date, the new original story from Oda here is an undeniable draw. Everything from the new characters to the island of Waford and its place in the wider One Piece universe fits perfectly into the lore. Though she’s standoffish at first, Lim quickly becomes one of the most endearing characters the franchise has seen in quite some time, and Adio is just the kind of complex self-motivated companion that the Straw Hats would team up with for an arc before saying their goodbyes. They’re both great, and through a mix of cutscenes and journal entries they’re each given the development they deserve.

However, while there is a compelling story to get stuck into while exploring Waford and its secrets, One Piece Odyssey does succumb to the anime game pitfall of retelling story arcs via Memoria, a world of memories that the Straw Hats need to enter to regain their full strength. The gameplay loop essentially boils down to experiencing story segments in Waford, enter a memory of a past arc, play through to its climax, regain powers, travel back to Waford to defeat one of the guardians and regain more of their powers, and repeat.

In-between story beats, players are free to explore fully realized versions of some of the most iconic One Piece islands, including restaurants, shops, and loads of NPCs going about their days that can be conversed with. These islands are large and detailed, and nearly everyone offers unique side quests to complete and hidden treasure chests to discover. The Straw Hats can be swapped between with a press of the d-pad and each has unique skills that aid exploration, such as Luffy being able to slingshot himself to high places and Zoro being able to cut down steel walls and bars.

With so much to do, things rarely get stale in Odyssey outside of the combat, and ILCA is able to use the memory angle as a way to change minor aspects of the story to keep fans engaged. Unfortunately, Odyssey’s first Memoria arc, Alabasta, is an absolute slog and almost immediately ruins the game’s pacing. Not only is Alabasta at least twice as long as any other playable arc, but much of the runtime is spent running back and forth across previously-explored, sameish areas in what can only be described as unnecessary padding. This frustration is eased a bit once fast travel gets unlocked several hours in, but needless backtracking is still built into the quest design. It makes a terrible first impression and requires some serious patience from players to get over the hump.

Though ILCA was previously best known for their work on the Pokemon Brilliant Diamond and Shining Pearl remakes, it’s clear that they took inspiration from Dragon Quest XI for One Piece Odyssey’s combat and encounter systems. Instead of random encounters, monsters and human enemies litter the open world and can either be run into or avoided entirely. Once a battle begins, four of the crew enter into turn-based combat and the rest are allocated to reserve units that can be switched to at any time. There’s even a handy auto-battle option that removes some of the tedium when grinding (a feature frankly every turn-based RPG should offer).

What’s unique about Odyssey is that everyone isn’t fighting as a group in a straight line; there are four “zones” on the battlefield, and the Straw Hats and their foes can move between them to attack each other. This adds an extra wrinkle of strategy on top of the weapons triangle-like system from Fire Emblem (Power > Guns, Guns > Technical, Technical > Power). Moving units around and switching in reserves to take advantage of weapon differences can get tedious, but seeing the crew pull off some of their signature moves never gets old. This is partially because special moves can’t just be spammed endlessly; players have to build up meter by using generic attacks first. It’s a novel system in lieu of a mana bar, and the sheer quality of animation in some of these special attacks genuinely elicited shouts of joy as a longtime fan of the franchise.

Characters become more powerful by leveling up and regain their skills by completing story arcs, but there’s also a surprisingly involved equipment system at play. Clothing items from notable characters (think Smoker’s coat or Aokiji’s eye cover) are scattered around in chests found in each world in Memoria and can be arranged on a Tetris-like grid to improve various stats. The best of these are sold at little pop-up shops in each world for one million berries apiece, conveniently solving the age-old JRPG problem of accumulating a ton of money while having nothing useful to spend it on. Later on, the ability to fuse pieces of equipment unlocks and can result in some truly game-breaking builds. Since there aren’t any difficulty settings, having such freedom over buffing (or de-buffing) character stats is a nice way to adjust the challenge.

What ties everything together is One Piece Odyssey’s incredibly strong production values. Though the art style isn’t quite as sleek, Odyssey sits right next to Scarlet Nexus and Tales of Arise as being one of the best-looking anime games on the market. It runs silky smooth on Xbox Series X’s performance mode without sacrificing much visual quality, and everything from the character models to the vast island vistas (especially in Waford) look stunning. Story is conveyed through a mix of well-animated cutscenes and in-engine dialogue scenes, but the team at ILCA went above and beyond to implement cinematic effects like dynamic camera work and focus shifts between characters so even the in-engine scenes feel premium.

Aside from visual quality, there’s just so much personality packed into the Straw Hat crew. Nearly everything is fully voiced, from proper cutscenes to dialogue scenes to banter between story moments. There are a wealth of references that pop up even during combat, like Chopper proclaiming his mastery of Monster Point or Usopp being eager to show off the new skills he learned on Green Bit. The performances by the anime voice cast are so on point that I regularly found myself grinning at their interactions (especially whenever Chopper bashfully called people jerks for giving him compliments).

One Piece Odyssey has dethroned 2020’s Pirate Warriors 4 as the best One Piece game ever made. From its authentic story and truly lovable original characters to its beautiful visual style that sings on current-gen hardware, Odyssey feels like a true next step for anime games. The heavy Dragon Quest XI influence pays off in spades, and ILCA’s appreciation of the source material shines through in just how lovingly depicted Luffy and the gang are here. The biggest sin Odyssey commits is terrible pacing in its first arc, and that alone may be enough to turn off prospective players. If you can stick it out, however, One Piece Odyssey is well worth the time.