Not so Final Fantasy is a tri-weekly column dedicated to all things Final Fantasy; from specific aspects of specific titles, to the universal features that set Square Enix’s inimitable JRPG series apart from the rest.

This unusually prolonged development cycle wasn’t a mark of the Square’s desperation to recapture the series’ golden age, however, nor was it the calling card of a fastidious director who steadfastly refused to release his work to the general public until it met his own lofty standards. Rather, it’s emblematic of the much loved JRPG franchise’s loss of direction and identity in the recent past.

What that meant for the finished article was that, after a tremendously impressive beginning that suggested maybe, just maybe, Square had finally perfected the formula for blending the series’ traditional JRPG elements with the faster-paced combat demanded (apparently) by modern gamers, XV begins a swift decline into mediocrity. Undoing all that earlier good work and resulting in yet another ‘what if’ moment for the once greats series.

Before we begin, please be aware that what follows is heavily laden with spoilers. Continue at your own peril. 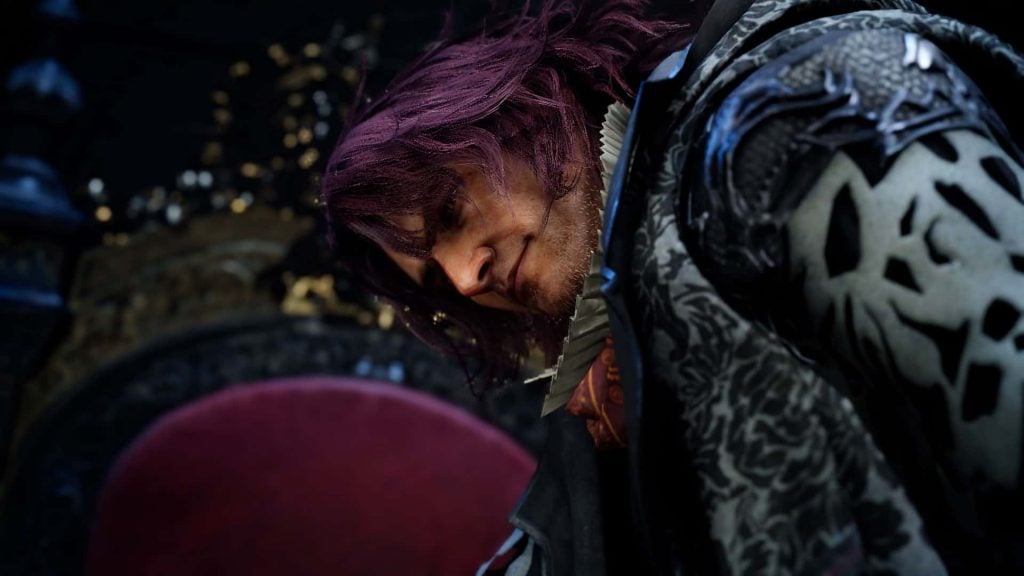 Having watched the tie-in CG movie Kingsglaive (starring Aaron Paul, Lena Headey, and Sean Bean), the accompanying anime, and played both Episode Duscae and the Platinum Demo prior to launch, I was chomping at the bit to begin my journey through the world of Eos when a shiny new copy of the game dropped through my letter box on a chilly November morning in 2016.

I still wasn’t sure about the characters, mind you; terrible names and Gladiolus’ horrendous tattoos aside, I was slightly put off by the whole itinerant boy band dynamic the quartet seemed to represent. Nevertheless, I was impressed by the apparent richness of the world itself, while the main narrative seemed complex and, for the first time in a long while for a Final Fantasy game, genuinely interesting.

In particular, the ongoing conflict between Lucis and Niflheim, reminiscent of the political tensions between Balamb and Galbadia Garden in FFVIII or the Returners and the Gestahlian Empire in FFVI, provided a solid foundation on which to build the rest of the story, with plenty of potential for intertwining sub-plots and numerous opportunities for expanding on the lore of Eos along the way only adding to the sense of depth. There were even signs XV might do something new and exciting with that most traditional of Final Fantasy tropes: magical crystals.

And, after a while, the legitimately touching, almost fraternal bond that held together the game’s quartet of heroes more than made up for their individual failings; putting to bed many of my earlier concerns.

There was plenty of promise visible in other areas, too. Whether fighting a mob of low-level grunts or a powerful new mark, combat was fast-paced and fun, placing a heavy emphasis on teamwork that fit snuggly within the wider themes of camaraderie Final Fantasy XV works so hard to cultivate. True, it wasn’t the deliberate, tactical, turn-based system I’ve been craving for the last fifteen or so years, but it wasn’t as jarring as I’d anticipated: it kind of felt like a light version Bayonetta or Devil May Cry, but with a Final Fantasy veneer.

Together with the unfailingly beautiful setting that offered a similar mixture of high fantasy and futuristic technology as FFVII, VIII, or XIII, but in a way that was unlike anything else Square Enix had created before, it was hard to envisage a time when exploring the picturesque landscapes of Eos, with your loyal friends by your side, would ever lose its allure. And I simply couldn’t wait to discover how these various narrative threads and mechanics would come together in this visually captivating world.

…But Ultimately Fails to Deliver 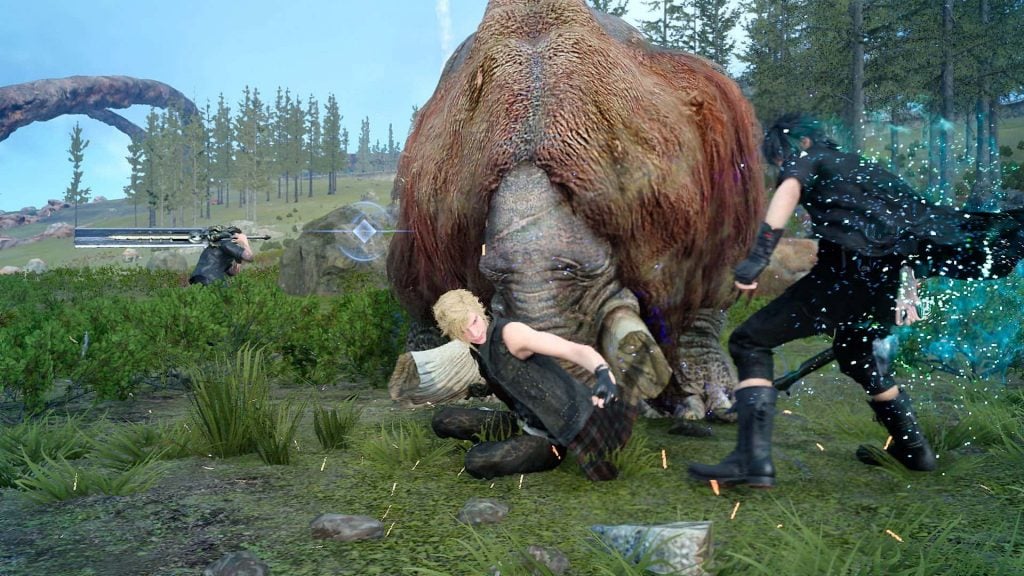 Yet, Final Fantasy XV simply fails to live up to its true potential.

The story all but falls apart as it picks up momentum, the writing staff and director unable to stitch together the disparate narrative threads that must have emerged over the ten-year development cycle into any kind of coherent, meaningful whole. In the end, amidst incongruous moments of gameplay (the entirety of the original chapter 13, for instance) we’re left with another formulaic tale of the unassuming hero fated to save the world from a nefarious force – in this case Ardyn Izunia: a villain whose motivations are only poorly defined over the course of the adventure.

Worse, the touching brotherly bond that united Noctis, Prompto, Ignis, and Gladiolus in the first few chapters is disrupted by a handful of eleventh-hour attempts on the part of Square Enix to give each individual character a darker edge. Illustrated in completely unnecessary moments of conflict between Noctis and Gladiolus following the events of Chapter 9, for example; or the ludicrously ill-explained, almost comical, backstory forced on Prompto as the game draws towards its disappointing climax.

Flashes of inconsistency that heavily imply the writing staff, as well as having to try and reconcile a decade’s-worth of competing ideas and plot points, were working to an unfeasible deadline that gave them only enough time to polish the first half/two-thirds of the game. Any resulting discrepancies were an unfortunate consequence that would be dealt with post-launch.

As disappointing as this narrative drop-off is, however, the mechanical issues that emerge as the player delves deeper into the game are more systemic. For all its visual splendour, it doesn’t take long for the player to realise that, at its heart, Final Fantasy XV’s combat and progression systems are actually pretty basic.

Victory, in the majority of cases, is as simple as mashing the attack button until the enemy’s no longer breathing, warping out of battle for a few seconds every now and again to replenish Noctis’ HP gauge or switch to a slightly more effective weapon. Magic and summons being largely superfluous, reduced to little more than spectacular set-pieces the purpose of which is to mask this inherent lack of depth.

Progressions is similarly rudimentary, restricted to a handful of passive and active abilities that don’t really alter the way fights play out beyond the obvious: i.e. larger HP pools for each character or additional accessory slots. While there’s also a decided lack of quest variety beyond an interminably long list of hunting contracts and hackneyed fetch quests in which the biggest decision the player has to make is ‘which classic Final Fantasy soundtrack should I listen to between objectives?’

Even exploration loses its appeal after a while, as this fundamental lack of variety rears its ugly head once again in the topography of Eos itself.

Though it’s many times the size of VI, VII, VIII, and IX in terms of square mileage, these worlds felt diverse and lived-in. Complete. As if there were centuries of history and secrets lying just below the surface, waiting to be discovered by eagle-eyed adventurers. Eos, on the other hand, is empty in every sense of the word: its settlements separated by an endless expanse of sand-coloured wilderness and tedious random encounters; it’s attempts at world building a collection of vaguely established events that almost seem separate from the people the player interacts with as the story progresses.

To be honest, the only thing that doesn’t suffer a noticeable downturn in quality over the course of the adventure is Yoko Shimomura’s superb soundtrack. 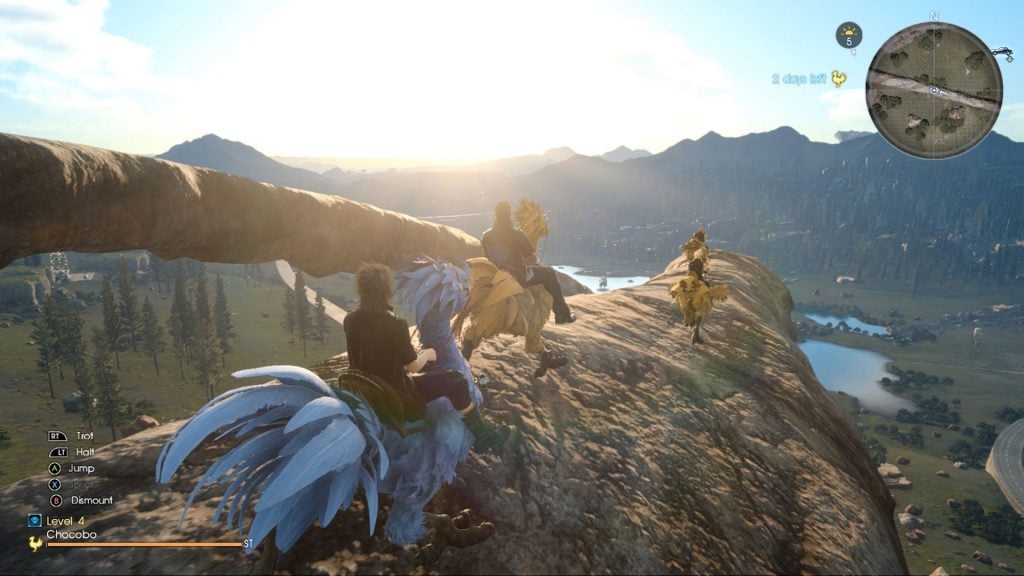 Apologies to any fans if this article comes across as a mite harsh – I assure you, it’s not borne out of prejudice or hatred. For all its drawbacks, Final Fantasy XV certainly isn’t an awful game and I certainly wouldn’t be averse to playing it again at some point in the not-too-distant future. I’m simply disappointed and more than a little frustrated at witnessing so much wasted promise first-hand.

If it had been utterly forgettable from start to finish, I probably wouldn’t have been quite so critical; writing it off as another misstep before looking ahead to the next installment in the hopes that FFXVI will be the modern Final Fantasy we deserve.

As it is, XV promises so much in the beginning, only to let us down once again. Establishing it as the latest in an increasingly long line of missed opportunies that no amount of post-launch patches and DLC expansions will ever truly rectify.