Of all the Nintendo sports games that have been spawned throughout the ages, it remains peculiar how the world’s most popular sport hasn’t fared quite so gloriously. Super Mario Strikers was a particularly average game on the Nintendo 64, and its sequel, Mario Strikers Charged, didn’t score any goals on the Nintendo Wii. There’s so much football potential at Nintendo, and to help celebrate the World Cup in Russia, here’s Nintendo’s team for your Panini sticker collection.

This position fits like a glove. Glover has been catching and carrying balls since 1998, and if it wasn’t only me that liked his eponymous game, it could have had its very own sequel. The ease at which Glover can gather the ball and then distribute it makes him the perfect choice for the now fashionable sweeper keeper. Gone are the days when you could stick a big Thwomp from Bowser’s Castle into the net — now they need to have some genuine talent.

The ideal wing back can both defend and attack. In recent years, many teams have neglected the defending aspect of a wing back and gone full attack. Luckily, with Palutena we get a player that’s fantastic at supporting the defense and more than comfortable at beginning a counter-attack. Her ability to fire three balls of light into the box at any given time creates havoc for the opposition’s goal.

I’ve always been a fan of the big guy/little guy pairing of the back two. Wario fills the big guy role for me perfectly, capable of producing some sly challenges that will keep the referee none the wiser. A battle-hardened warrior seeing experience in important matches against Captain Syrup and Rudy the Clown, Wario will captain the side.

Having seen defeat with his brother against Mario and Luigi in tennis, Waluigi won’t want to lose this tournament. The ideal partner at the back with Wario, he is able to use his height to defend a corner. Being a little quicker than Wario allows for a high line should the team need to press in the final third.

Like with many national teams in the World Cup, you don’t need to be born Nintendo to become Nintendo; check out how French the Tunisian squad is. His ability to take possession of the ball against the Robot Masters has earned him his selection at left back. His natural left foot allows him to bomb forward and hit some balls into the box should the team find itself pressing against the opposition’s back line. With a backlog of important games, Mega Man has the experience to push the match forward.

Bulbmin is that rare kind of player that only appears once in a generation — namely, in Pikmin 2. Its resistance to any kind of attack allows it to gobble up play and lay off a neat pass to one of the attacking players. While it anchors the foundation of the formation, its presence allows some flair and flexibility for the offensive players, creating more chances against the opposition.

Should Birdo find plenty of room in front of the opposition’s back four, her deadly shot should fizzle straight past the goalkeeper. She can strike the ball from outside the box, or even nestle her way inside and sneak the ball into the back of the net. Quick and nimble, she will unravel any defense.

Spoink is the ideal box-to-box midfielder, as it has no choice but to keep moving. Great confidence on the ball, able to carry it from one end to the other, Spoink is an ideal playmaker that will find the right ball to cut open the opposition’s defense. Being a psychic-type pokémon, Spoink can predict the opposition’s next move, allowing it to make all the correct decisions and remain super effective against rough challenges.

Inkling Girl is quick and deadly, with short bursts of enthusiasm to get into the opposition’s final third. Speed will be her main strength, especially on the counter-attack, taking advantage of the opposing team’s high line. Known for having a little attitude, she will probably release a hip-hop album in between making those crazy runs on the pitch.

Shy from the limelight but a star on the pitch, Link’s ability to slice and dice his way into the back of the net earns him his place on the left wing. Link is much stronger than he looks, with even a team of moblins having trouble pushing him off the ball. Some say this little guy scored against Ganondorf in three different timelines, but all we know is that he’s good enough to keep ‘‘Lynel’ Messi on the bench this World Cup.

With not so much ability behind him, Doshin makes the team because his astonishing height can win those important aerial balls. If plans A and B fail, routing one to Doshin’s gigantic body will surely create a space in front of goal that either Birdo or Spoink can exploit. Every team needs a target man, and with Doshin already known to have flattened a few villages, I’m sure he can flatten a few defenders too. 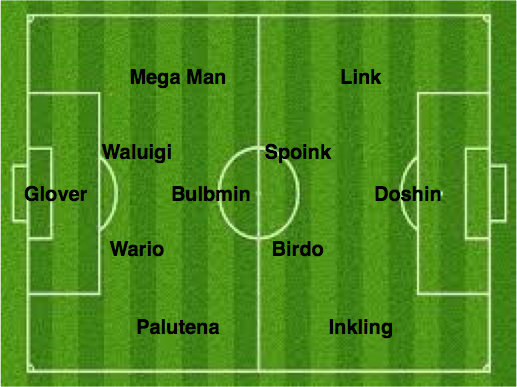 The Nintendo World Cup XI will play a 4-3-3 formation. With Doshin as a target man and great speed on the wings, quick counter-attacking play will help them create some fantastic chances. A strong, energetic midfield will allow them to control possession and play at their own tempo. Should the opposition threaten the final third, there are enough defensive qualities in there to prevent conceding a goal.

Now that the World Cup in Russia is full swing, and as an Englishman awaiting the ball to roll between Jordan Pickford’s legs, I’m quietly confident this Nintendo World Cup XI could win the tournament. If you have a better team, let me know in the comments!