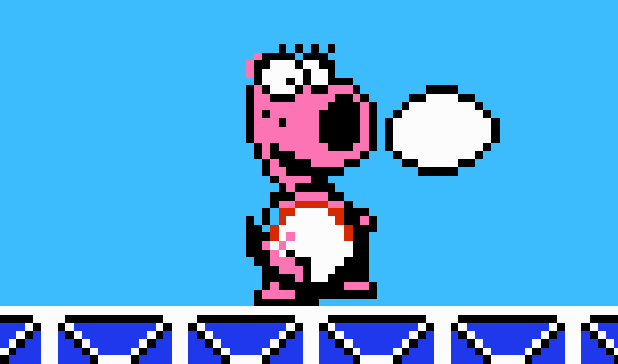 It’s Women’s History Month, and to celebrate we’ve been writing about female game characters and women in the industry that have made and continue to make an impact on Nintendo’s storied past, present, and future. There is one Mario game regular cameo-maker, however, that is often overlooked when it comes to this subject (and any subject in general), and that is Birdo. The reason for this snub may have something to do with the ongoing debate as to what gender Birdo is (or was) exactly, and that’s precisely why this pink dinosaur-like thing has everyone confused. But in a medium full of thousands of powerups, the transformation that Birdo has undergone over the course of her history is not only exceedingly rare but full of more twists and turns than the Mushroom Kingdom’s plumbing.

First introduced in the NES classic Super Mario Bros. 2 (itself part of an identity issue), Birdo was just one of many bizarre enemies Mario and his posse faced off against in the nightmarish dream world of Subcon. However, where things get strange is in the original manual’s description of the mini-boss (mistakenly called Ostro, even in the end credits, as nothing whatsoever can be simple about this character). The brief text refers to a male, but explains that Birdo “thinks he is a girl and spits eggs from his mouth. He’d rather be called ‘birdetta.'” Later editions removed the second sentence, but the orange bow on the top of his head remained. Was it a sign? If so, what did it all mean? 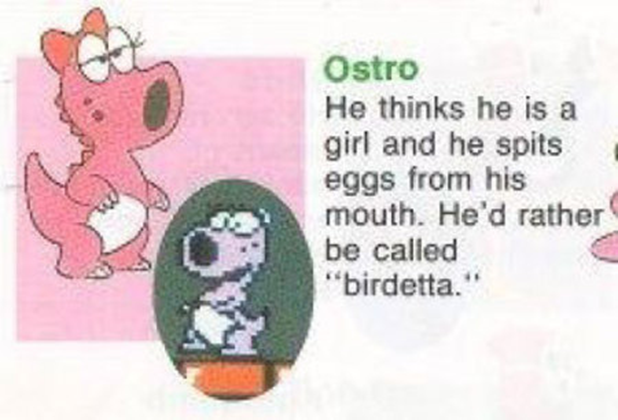 Still, at that point the issue wasn’t in question. Sure, Birdo spit eggs from his mouth, but two sequels later Yoshi also laid them, and he was a dude, so it totally made sense that something like that was possible in the Mario universe. Besides, after SMB2, the lonely dino disappeared from Mario games, fading from gamers’ memories like a previous night’s dream. End of story. That is, until twelve years later when players would see the next appearance of the massive-mouthed monster. But this time something had definitely changed…

In Mario Tennis for the N64, Birdo finally came back, playable this time and (even more proof of his inability to pick a side) now an ally of Team Mario with a racquet in hand. The former “he” was now officially labeled as female, voiced by Jessica Chisum, and even given a partner both on the court and off, with Nintendo now promoting the ever-feminine dinosaur-ish entity as a romantic interest for the series’ other anthropomorphic reptile, Yoshi. While the idea of which one might produce the pair’s children might make for a decent discussion, what was more interesting about this was the definitive gender switch. Birdo was no longer just a guy who wanted to be a gal, but had actually achieved such. Of course some will say that Nintendo merely retconned the character in order to provide Yoshi a suitable mixed-doubles partner (except that the very male Waluigi was also created here for a similar purpose, specifically to give Wario a tennis mate of his own), which would make sense if the confusion over Birdo ended here, but alas, from here out things only get murkier. 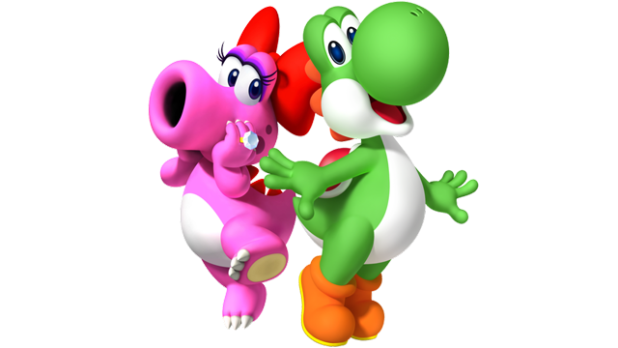 Well, they both like spitting things. Maybe it’ll work!

In Super Smash Bros. Brawl Birdo appears as a trophy, which could be interpreted as sexist if the description didn’t read “A pink creature of indeterminate gender that some say would rather be called Birdetta. A big ribbon on its head is its most distinguishing feature.” What?! Ignoring the fact that the creature’s enormous ovum-spewing mouth-hose might draw the eye just a tad more than a piece of colored fabric, this last little tidbit contains some fascinating subtext. A ribbon in the hair is a common video game trope used to identify a character as female, especially when pixels were limited, but this statement, while clearly trying to come off as non-committal, may have instead made tacit implications. Sure, Birdo wore a ribbon tied to some non-existent hair, but so what? With one fell swoop, Birdo was sent back to square one, Nintendo only inviting more speculation as to what the hell was going on here exactly. The news of this must surely have come as a shock to poor Yoshi as well, now unclear as to the dynamics of his relationship.

After that lines kept being blurred. The Japanese referred to her as Catherine, while the European website for Mario Strikers Charged Football refers to him as male, noting that “he can score at will.” Birdo was stuck in no (wo)man’s land. Finally though, the closest thing to definitive proof came along, though only for eastern audiences. In the Japanese-only Wii game Captain Rainbow, Birdo is first encountered behind bars. In jail for using the ladies room while looking like a man to the arresting officer, the presumed male implores the player to check out his home for proof of his womanhood. Upon discovery of something buzzing under a bedroom pillow, some text pops up stating that the blurred device is “Proof that the owner is a woman.” That’s enough for me. Whatever the mysterious object is (ahem), regardless of the veracity of this statement, the result is Birdo’s eventual freedom.

Freedom, people. That’s what this is all about. Though the saga of Birdo has been been a roller coaster ride of utter confusion akin to a Saturday Night Live sketch, ultimately none of that matters. Regardless of whatever we think, Birdo simply keeps on being who Birdo is: an egg-hocking C-list character with a dream of stardom. She/he is free to be whatever he/she wants, indeterminate of gender and unbound by classic stereotypes. This in itself is a powerful message to players and developers alike not to define a character by whether they are male or female or otherwise, and though in the end it seems that in all likelihood Birdo is a “he” who became a “she” after all, as stated before, that is neither her most defining characteristic, nor should it be. This is the power and impact Birdo has made upon the video game landscape, and in one to be celebrated during Women’s Month in gaming.