Capcom’s been around for a while now, and they’ve made plenty of video games. They’ve dabbled in just about everything from arcade games to survival horror. One of their biggest contributions to gaming is the popularization of the fighting game genre with Street Fighter II. Since II’s success there’s been a near endless amount of updates, sequels, and spin-offs in the Street Fighter franchise. Capcom has also made many fighting games that aren’t Street Fighter, and plenty of them are exceptionally good or entertaining in their own right. Today I’m going to count down a few of their other fighting games that I think are worth checking out, but let’s break the rules for this list down before that:

Without further ado, let’s get into it. 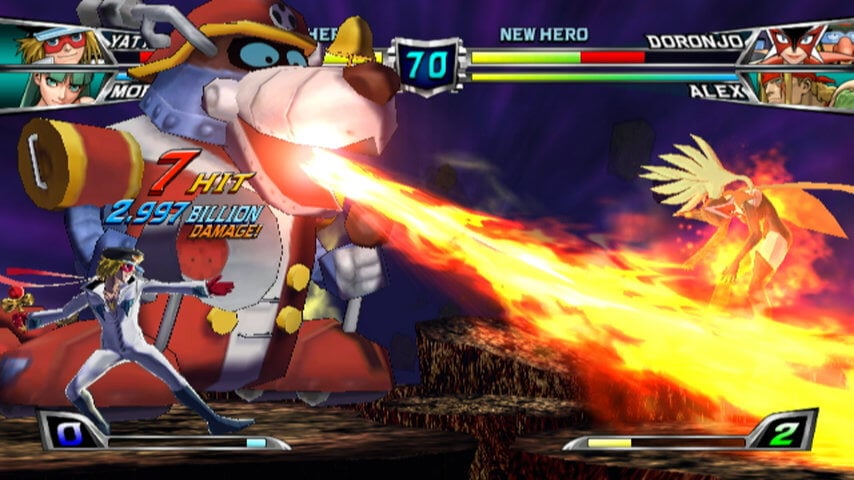 In Tatsunoko VS Capcom the anime world of the Tatsunoko universe crosses over with the real world, and has heroes from both realities teaming up to stop the forces of evil. This is a fighting game a lot people didn’t think would actually leave Japan. Tatsunoko isn’t exactly a brand name anywhere else, even amongst some of my friends this game is still “Seahorse VS Capcom,” because they don’t know anything about the Tatsunoko animation company.

TvC is easily one of Capcom’s most vibrant and colorful games. Its roster of characters of course comes with the crossover staples like Ryu, Chun Li, and Morrigan, but it also pulls characters from Onimusha, Rival Schools, and even the Legends version of Mega Man. And this is all without even going into the crazy cavalcade that is the Tatsunoko side of the roster. This is also the only fighting game out there where you do not tens, hundreds, or even thousands of damage; you do billions.

Fast, fun, and easy to pick up, Tatsunoko VS Capcom is great fighting game. It’s just a shame it’s forever stuck as a Wii exclusive. 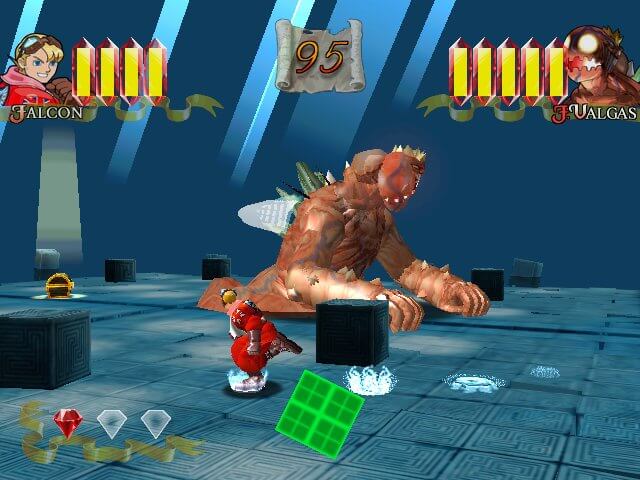 The original Power Stone was a quirky arena-fighter for arcades, and later the Dreamcast, but Power Stone 2 is where the franchise really shines. A free-for-all 4-man party fighter, Power Stone 2 was one of the main reasons I was sad I didn’t have a Dreamcast growing up. Its massive multiplayer battles are some of the most hectic in any fighter, mostly because Power Stone 2 had a “use anything and everything as a weapon” policy long before Dead Rising became a thing. Barrels, boxes, swords, large chunks of ice, and even rolled up magazines make up some of the parts in the game’s item arsenal. Top everything off with a colorful array of playable characters and an in-game level up system that lets you transform into a super hero, and you have the Dreamcast classic that is Power Stone 2. 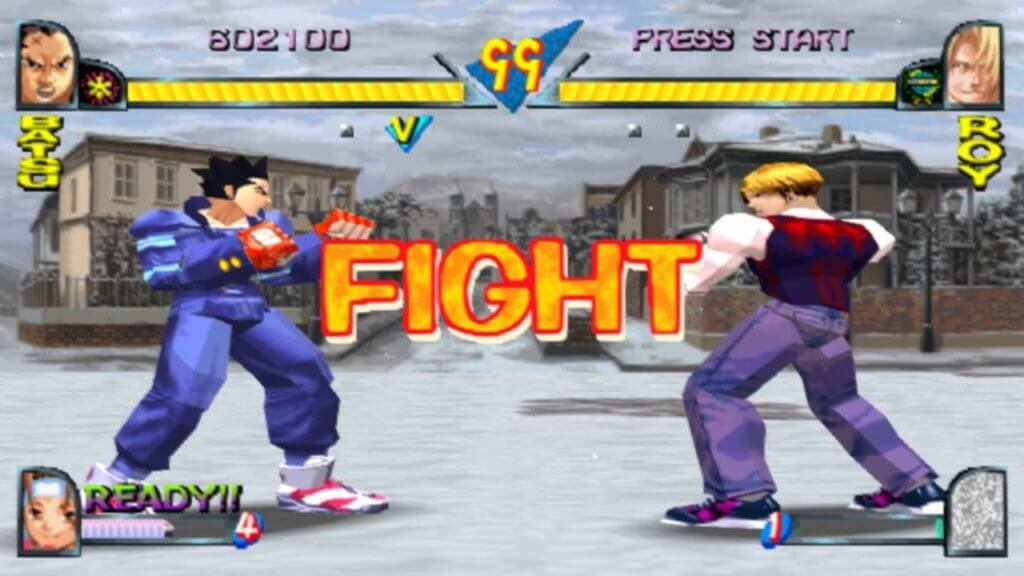 Rival Schools certainly isn’t Capcom’s first foray into 3D fighters, but it is probably their most well-remembered. The first Rival Schools game came out in 1997, when a lot of companies were still trying to figure out how to make polygons look good. Its graphics might not have aged very well, but its gameplay is what makes it a cult classic. This 2-on-2 fighter is best described as a 3D version of the first Marvel VS Capcom. Your second character really isn’t a character, but rather an assist you can call mid-fight to extend your combos.

Rival Schools, cast is pretty big. If you’re looking variety, you’ll definitely find it. The game’s story follows representatives from a bunch of different schools investigating a series of kidnappings that have happened across various campuses. It’s a little bit deeper than your generic fighting tournament story, but Rival Schools has since become a kind-of dead franchise. It lasted for 3 games from 1997 to 2001 before falling off like many of Capcom’s other non-Street Fighter fighting game franchises. This is a series I hope sees a revival of some kind, since Capcom hasn’t dabbled in a traditional 3D fighter in a long time. 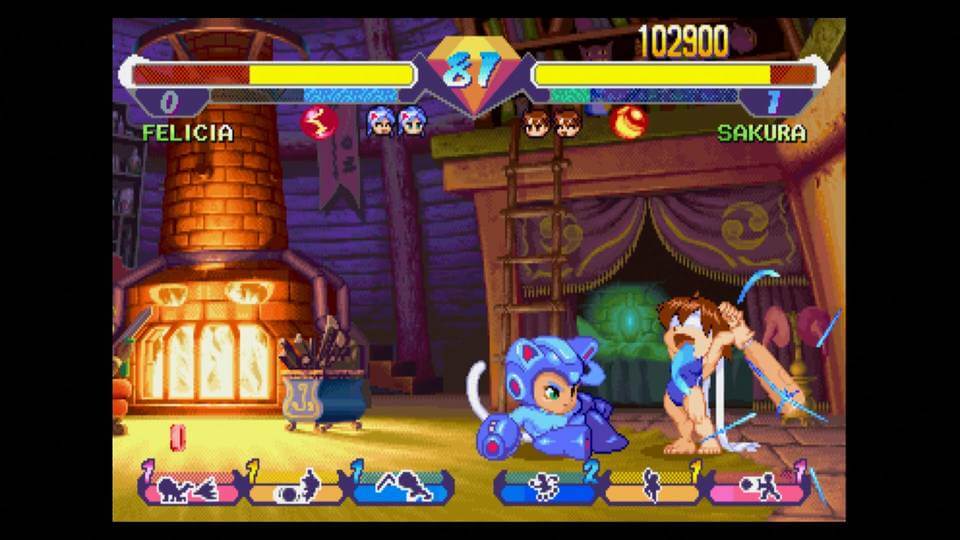 If you like Street Fighter, but want something a little more simplistic then Super Gem Fighter is the game for you.  This cutesy crossover title features characters from Street Fighter, Darkstalkers, and the arcade only Red Earth. This is a pretty simplistic 4-button fighter, 3 if you don’t count the taunt button. The gimmick for this game is that hitting your opponent causes them to drop gems which you can pick up to make your moves stronger.

This game is all kinds of goofy. The small chibi-styled characters parody not only themselves, but other Capcom characters. Almost every member of the playable cast has costume changes for certain specials moves. Super Gem Fighter is a great game for beginners and experienced fighting game players alike thanks to its easy controls and cute charm. 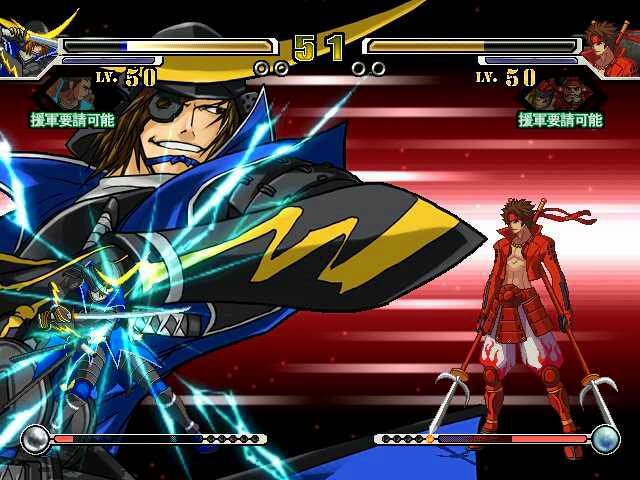 Sengoku Basara X is the main reason this list is “cool” and not “best.” This collaboration between Capcom and Arc System Works is a broken game. It’s a game where almost everyone on the roster has a jab-related infinite, and that makes the highest level of play kind of boring since it’s rushing to see who can timeout who first.

It’s a really fun game casually though. A lot of the game design choices reflect how things work in the regular Basara games. Characters level up to get stronger which is an interesting concept that many traditional fighting games don’t really use. The music and artwork is great. You can tell Arc System Works helped out with the sprites because the level of detail is really close to that of Guilty Gear. Overall, Basara X is a fun fighter, with a really bad meta-game. 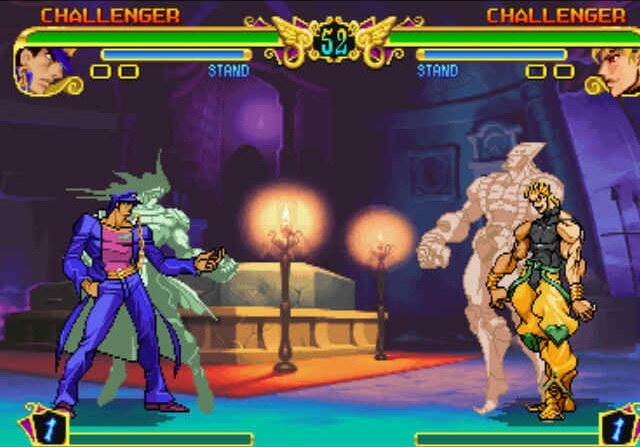 When you think of licensed Capcom games you probably gravitate towards their old deal with Disney on the SNES or their various Marvel games, but there is one PlayStation era fighter that stands above them all. JoJo’s Bizarre Adventure is a staple for Western anime fans now, but when this game came out nothing related to the franchise had been released overseas. The game features a very stylish, and sometimes weird, cast of characters that make use of powers called “Stands” to fight with them. How your character plays can depend entirely on whether their stand is active or not.

The game was a cult hit when it came out, and gained popularity as the manga and anime became more mainstream. Capcom briefly revived the game with an HD port when a remake anime was announced, but it was short lived and removed from online market places, probably for contract reasons. 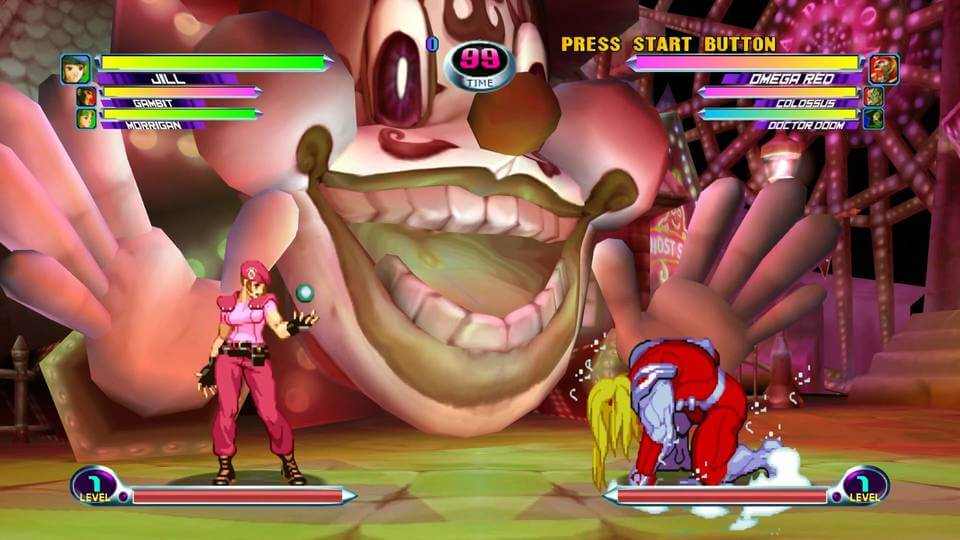 There’s no way I could make a list like this without mentioning a Marvel vs Capcom title. MVC2 is the quintessential Marvel VS game. The roster, the music, the stages, the cheesy beginning match one-liner, this game was somewhere between “great” and “so bad it’s good.” Any arcade worth its weight had an MVC2 cabinet, and it probably cost about a dollar to play.

This is another game that has a horribly busted high-level of play, but is incredibly fun when played casually. There’s a very odd selection of characters from both Capcom and Marvel’s respective universes. There’s a lot of Street Fighter and X-Men characters in there since that’s where the series spawned from, but Capcom went in some weird directions when choosing characters for the game. SonSon, Hyato Kanzaki, and Jin Saotome aren’t exactly household names but I think I appreciate their inclusion all the more because of it. The roster is what really sells a crossover game, and MVC2’s is easily one of Capcom’s most unique.

2. Capcom vs SNK 2: Mark of the Millennium 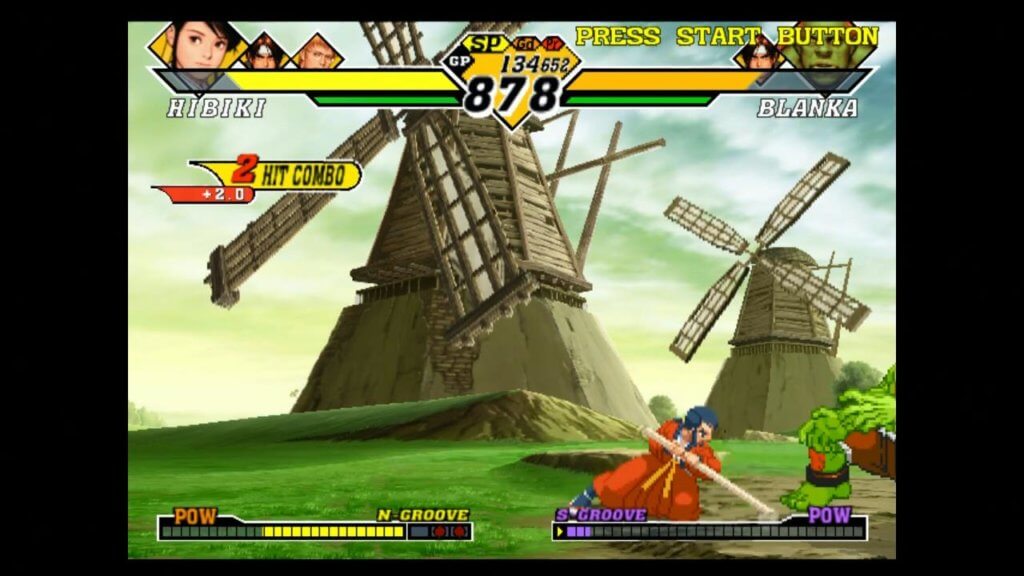 Capcom and SNK had something of a rivalry going on for most of the 90s during the peak of arcade game success. It seemed like there would be some sort of inevitable clash, but not in the way people were expecting. There have been plenty of crossover games between the two, but none quite as special or polished as Capcom VS SNK 2.

The game’s best feature, other than its huge roster, is its Groove System. Capcom pulled character from all kinds of games between the two companies and as such decided to make a system that lets you play them in a similar way to their original game. Things like dashing, air blocks, and even how super moves work are determined by your selected Groove, which makes the roster a bit more diverse than it originally seems. Top it all off with a system that lets you play as either a team of 2 or 3 characters, or fly it solo on one very powerful character, and suddenly Capcom vs SNK 2 becomes one of the most customizable fighting game titles out there. 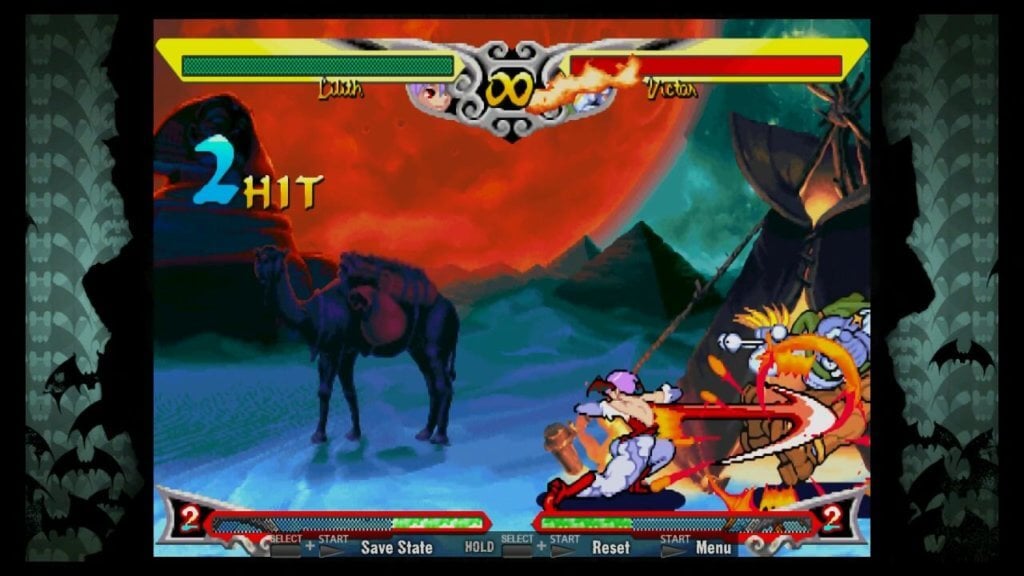 “Darkstalkers are not dead.” That was the sentence Yoshinori Ono of Street Fighter development fame said to Capcom fans at Comic-Con almost 6 years ago. Capcom really hasn’t done much since then to prove that statement true. Chances are that if you’ve played a fighting game made in the past 20 years, you’ve played something influenced by the Darkstalkers franchise. Concepts and ideas that Darkstalkers introduced and/or popularized include: gatling combos (the ability to cancel normal attacks into other normal attacks), EX versions of special moves, and air dashing.

Darkstalkers is more than just its contributions though. This B-grade horror inspired fighter has a cult following for a reason. It’s gameplay is fast and reactive. Characters’ life totals carry over between rounds without resets to time or resources. Just about every character on the roster feels unique and different, each inspired by a different occult theme. Its stages are delightfully creepy, and it had some beautiful sprite work for it’s time.  The last game in the franchise, Darkstalkers 3, was released almost two decades ago in 1997. Since then, the only Darkstalkers representation we’ve seen from Capcom has been splashing Morrigan into every crossover game the company makes and a couple of compilation games. Darkstalkers is easily the one franchise out of all of Capcom’s ignored IPs that deserves a second chance.