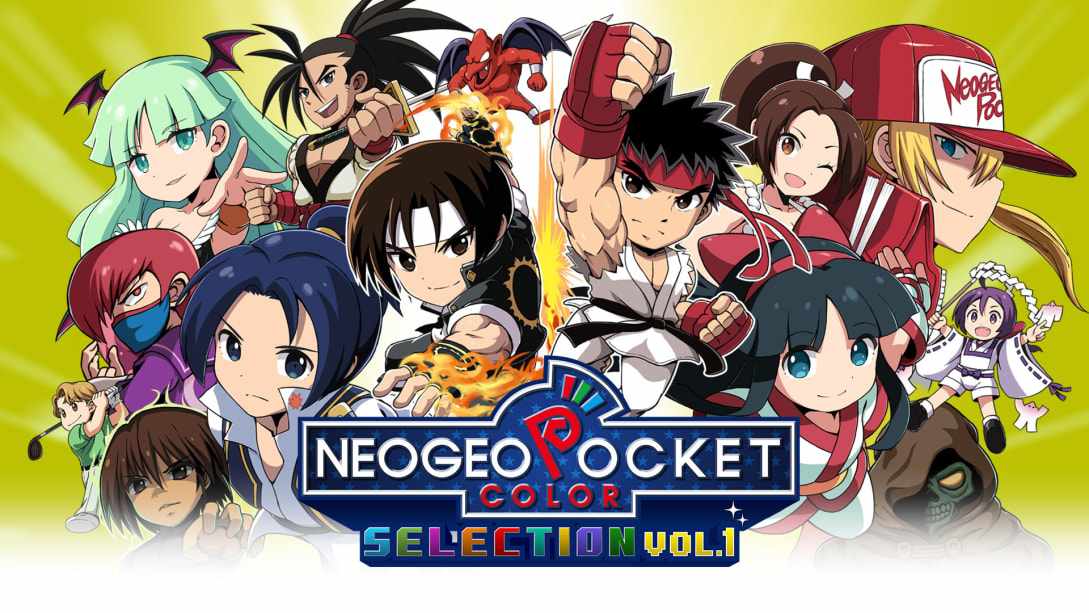 Whenever people discuss the myriad of handheld systems released over the years, the NeoGeo Pocket Color is rarely brought up. Looking back at its history, it’s hard not to see why—the 16-bit system suffered from poor sales, and its lifespan lasted for less than a year in the U.S. That being said, the cult following the system has accrued over time is palpable, and this can largely be attributed to the high quality of its limited library that pushed the boundaries of what was possible in handheld gaming (particularly when it came to portable fighting games). Nowadays, it’s easy to look at the selection of games featured in NeoGeo Pocket Color Selection Vol. 1 and dismiss them as inherently inferior versions of developer SNK’s most popular titles. Those who choose to check out the collection, however, may be surprised at just how well these titles have held up, and they are all included in a package that, while humble, does more than enough to preserve these overlooked gems.

A Handheld for Fighting Games

In total, NeoGeo Pocket Color Selection Vol. 1 features ten titles, six of which were already individually available for purchase on the Nintendo Switch eShop. These six titles are all some of the system’s most noteworthy fighting games—Fatal Fury: First Contact, King of Fighters R-2, SNK Gals’ Fighters, Samurai Showdown 2, The Last Blade: Beyond the Destiny, and SNK vs. Capcom: The Match of the Millenium. All six games were technical marvels for their time, especially considering how difficult it was to make a good handheld fighting game back in the 1990s and early 2000s, and they are worth experiencing even now despite their limited presentation and controls. Visually, these titles benefit from a “chibi” art style that retains the combatants’ personality and flair seen in their arcade and console counterparts without taxing the hardware the games were initially released on. But it’s the gameplay where these titles really impress, as they faithfully translate SNK’s technical, cancel-centric fighting systems using just two buttons. Even if the maneuvers and combos themselves are less intricate than in the titles’ arcade counterparts, the ways that attacks flow into each other feel nearly identical, and even the unique pacing and mechanics of games like Samurai Showdown 2 and The Last Blade are recreated beautifully here.

Of this selection of fighting games, King of Fighters R-2 and especially SNK vs. Capcom are likely going to be the highlights for most players, as both are relatively content-rich fighters with a hefty amount of characters to choose from. Their fighting mechanics are incredibly polished, and they both feature fun side content that adds further to their longevity. But the biggest surprise of the selection is easily SNK Gals’ Fighters. The framerate seen in the other fighting games is compromised to varying degrees, but SNK Gals’ Fighters features a consistently brisk framerate that backs up a shockingly fast-paced, intricate fighting system. It’s noticeably lighter on content than either of the two aforementioned titles, but it arguably highlights SNK’s mastery of fighting game mechanics more than anything else in the collection.

Rounding Out the Collection

The remaining four games in NeoGeo Pocket Color Selection Vol. 1 have not been rereleased on the Nintendo Switch up until this point. All of them are non-fighting games, including Metal Slug: 1st Mission, Metal Slug: 2nd Mission, Dark Arms: Beast Buster 1999, and Big Tournament Golf. Dark Arms is an interesting hybrid between a top-down shooter and an RPG, and it features a rechargeable meter tied to the character’s ranged weapons that makes the player more carefully consider when to fire at an enemy. Big Tournament Golf is definitely the odd one out, as it is a pure sports game without any kind of action focus. The mechanics are simple and enjoyable enough to serve as a fun distraction from the more substantial titles in the collection, and it boasts a surprisingly solid presentation for a handheld golf game.

The highlights among these four titles are easily the two Metal Slug games. The arcade Metal Slug titles are well-regarded for their ludicrously-detailed and fluid sprite animation, and that trademark style is recreated admirably here in spite of the limited hardware of the NeoGeo Pocket Color. These bite-sized Metal Slug titles feature some more explorative stages than their arcade counterparts, and since the amount of enemies and hazards to watch out for are smaller in number, the games have a more tactical feel that contrasts with the arcade titles’ hectic pace. They also feature a larger number of bite-sized levels, which is surprising considering the arcade Metal Slug titles typically only featured six stages each. 1st Mission is a relatively consistent run ‘n gun experience that is worth playing, but it does suffer from some unclear direction and dragged-out boss encounters. 2nd Mission features a few more gimmicky segments, but that greater variety ultimately makes it the stronger title.

A Healthy Dose of Bells and Whistles

NeoGeo Pocket Color Selection Vol. 1 as a package may be simple, but its quality-of-life features are well-considered. Players have a great deal of control over the game display, as the level of zoom and the border surrounding the actual game screen can be tweaked to the player’s liking. In addition, the player can toggle between the standard color option or a black-and-white image if they wish to replicate the look of the original NeoGeo Pocket, and they can even display scanlines for an even more authentic look. Every game comes with the expected rewind feature, but what’s even more useful is the fact that the player’s progress is automatically saved when they exit out of a title so they can easily jump right back into where they left off. 3D models of each game’s box as well as their respective manuals can be viewed at any time, the latter being especially useful for learning how to play each title. The only issue with this setup is that the collection does not include a uniform control menu for each title, which wouldn’t be a problem except not every game’s instruction manual includes the same information in regard to the controls. For instance, the manuals for games like SNK vs. Capcom feature character-specific move lists, but King of Fighters R-2’s manual lacks this information, which makes learning that title needlessly difficult compared to the others.

In the end, NeoGeo Pocket Color Selection Vol. 1 is a remarkably solid collection that faithfully preserves an obscure piece of gaming history. It’s fascinating to look into how SNK overcame the challenges of developing for a portable system back in 1999 and 2000, and the collection’s fighting games in particular are nothing short of impressive. The primitive appearance of these titles may be off-putting to some, especially when comparing them to SNK’s arcade classics, but when sitting down to play them, it’s easy to forget about these limitations. It’s a testament to how well-constructed these titles are, and it’s fantastic that they are now easily available for Switch owners to experience.