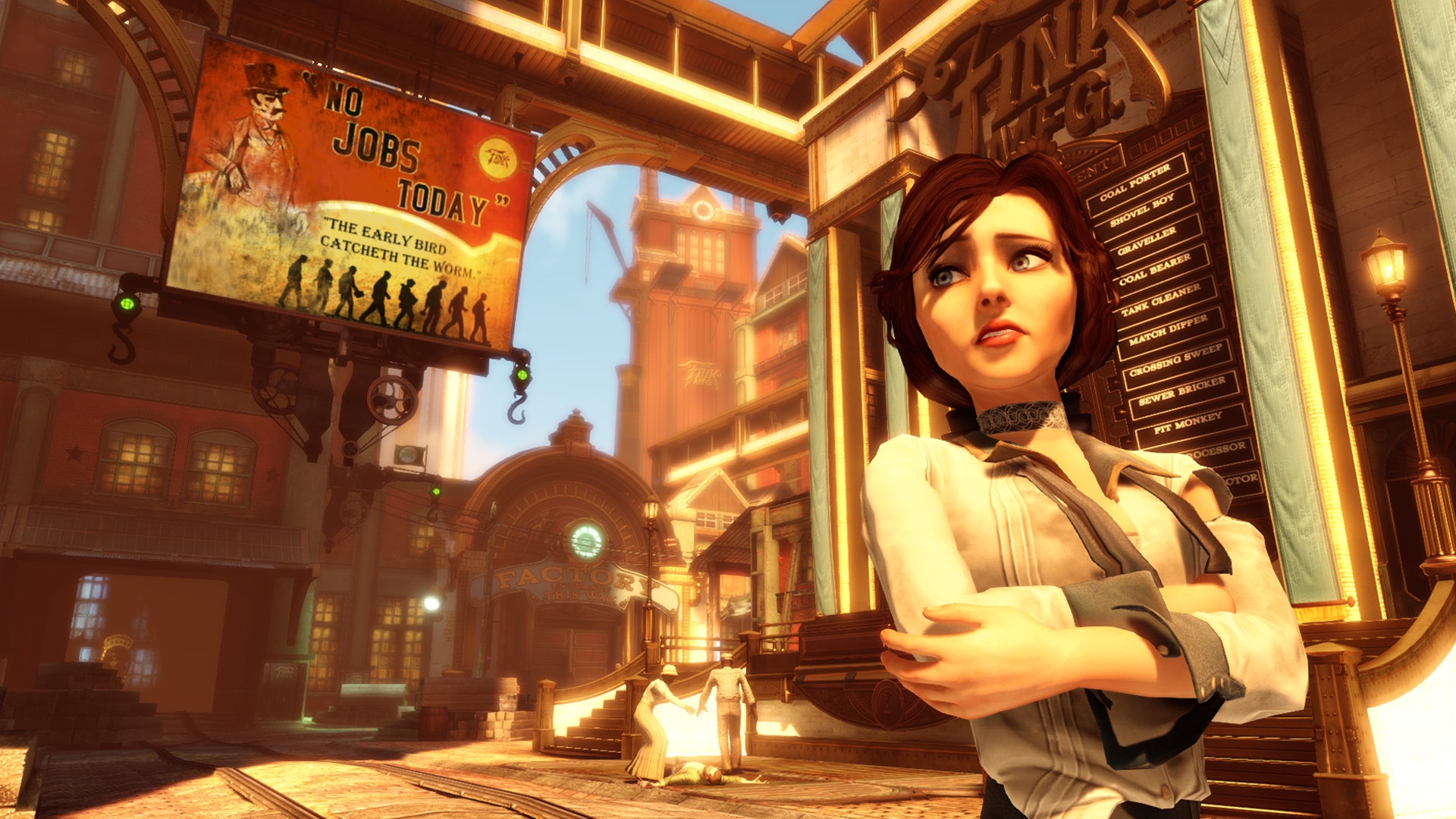 These are the ominous words that open Bioshock Infinite, a promise of terrors and wonders to come, and a sly hint at what the game is really about.

With the recent announcement that the Bioshock trilogy was being remastered, we thought, why not go back and play the original versions before the big three return.

This project begins with the latest in the series, and that is, of course, the somewhat divisive Bioshock Infinite. Divisive you say? Well, amazingly, yes — there is indeed a very vocal subsection of the gaming community that feels Bioshock Infinite betrays itself in its very design.

Their argument is that the immersion of the world and the depth used to design Columbia would’ve been better utilized in an exploration style or perhaps a walking simulator type experience. On the contrary, though, the constant onslaught of ever increasing violence is tantamount to the messages and themes of the game, even if Ken Levine, who directed the game, admits to struggling with their implementation. 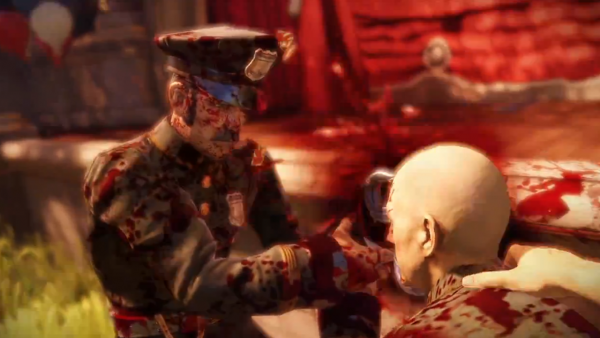 Columbia is a world on the edge of a revolution, and while many a man has dreamed of a revolution to topple his personal version of corruption or tyranny, the reality of these revolutions generally only has one certainty: a lake of blood and an endless trail of the dead and maimed. The Russian and French Revolutions are both prime examples of this fact.

In that way, it seems that the inherent violence of Infinite, particularly in relation to its two warring factions is not a creative hamstring but an absolute necessity. And this isn’t even the only valid point in that camp either. It’s also worth noting that the main character, Booker DeWitt, is a former soldier and strikebreaker for the Pinkertons, a veteran of at least two massacres, and a man with a lot of blood on his hands. This is seen as the initial reason for his being chosen for this mission, and as such, it informs much of his journey through Columbia.

But what is this mission? Well, that’s where things start to get complicated, and if one thing can be seen as a detriment to the enjoyment of this unraveling plot, it’s perhaps just how complex and confusing it can be, especially upon an initial playthrough. The player has already been rocketed to a floating city in the sky by rogue quantum physicists by the time the game has even properly begun, and then there’s the jarring introduction to the floating city itself.

The world of Columbia comes off at first like a beautiful utopia, with well-dressed, free citizens living a life of leisure in a gorgeous cityscape burgeoning with remarkable artisanship and carefully crafted architecture. The off kilter nature of this place is made apparent almost immediately as a barbershop quartet is seen performing The Beach Boys’ “God Only Knows” (this is 1912 after all). Despite the angelic legions singing “Will the Circle Be Unbroken” (more on that later), it isn’t long before the seedy underbelly of the city is laid bare, after Booker wins a “raffle”, and is given his prize: the chance to lob a baseball at an interracial couple. 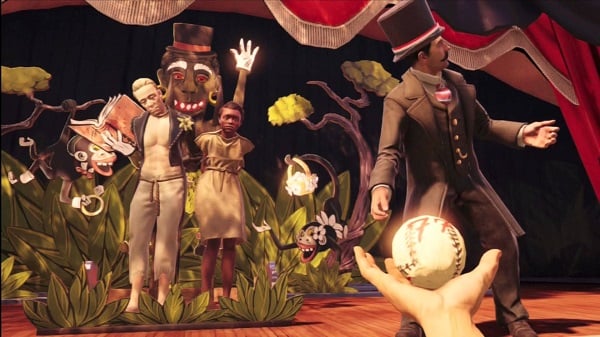 The first person perspective of Bioshock Infinite makes this section especially uncomfortable, and is possibly the best use of the morality system the series has ever imagined. Though the revelation of Booker’s identity as “the false shepherd” comes regardless of your choice, like the choices of Telltale’s games, it’s more about how it effects you, the player, and how you see yourself in the mirror of this world. Are you willing to become a violent bigot in order to maintain your cover? Does the greater good, or your perception of it, have an inherent value that supersedes the rights of these two humans to pursue their love, free of persecution?

These are the kinds of hearty and heavy questions that Bioshock Infinite preoccupies itself with asking, right from the outset. Later, the game asks you again to decide how you perceive right and wrong, when a heady general from Booker’s past implores Booker to kill him in cold blood. General Slate seeks a glorious death on the battlefield, but is unarmed and already wounded when Booker finally confronts him. Is it right to murder a man who asks for death? Is it vengeance or justice that motivates you? Mercy or retribution? The gray color of moral quandaries like this adds a level of uncertainty to the experience, leaving the player always wondering about the righteousness of their mission and what its eventual end result will be.

Slate is an echo of the past, like Booker himself in some ways. Glory on the battlefield is a product of America’s past, one that has fallen away for most, as the two World Wars of the 20th century, along with their tens of millions dead, ceaselessly burned the scales from the eyes of mankind. Other echoes of this violent past, and its archaic beliefs, are apparent all over the city in propaganda posters, the discrimination and subjugation of anyone who is not a WASP (White Anglo-Saxon Protestant). These are not parts of America’s history that most school children are privy too, and the ugliness of these images, the likes of which include a white man with a sword standing tall among scrambling caricatures of other races with the caption “Battling back the hordes!”, are a scarring reminder that America wasn’t always the shining light of freedom and liberty that it proclaimed itself to be.

Much like the original Bioshock, and to a lesser extent, it’s sequel, Bioshock Infinite is constantly using its time period to remind players of the history that preceded them, and how it effects the way their country, and their world, is seen today. The racial tensions that are increasingly bubbling up between minorities and authorities of late didn’t simply occur overnight, or even due to increasingly troubling events involving law enforcement over the last couple of years — these are struggles with a long and ugly history, one that Infinite lays bare in its layered and nuanced telling. 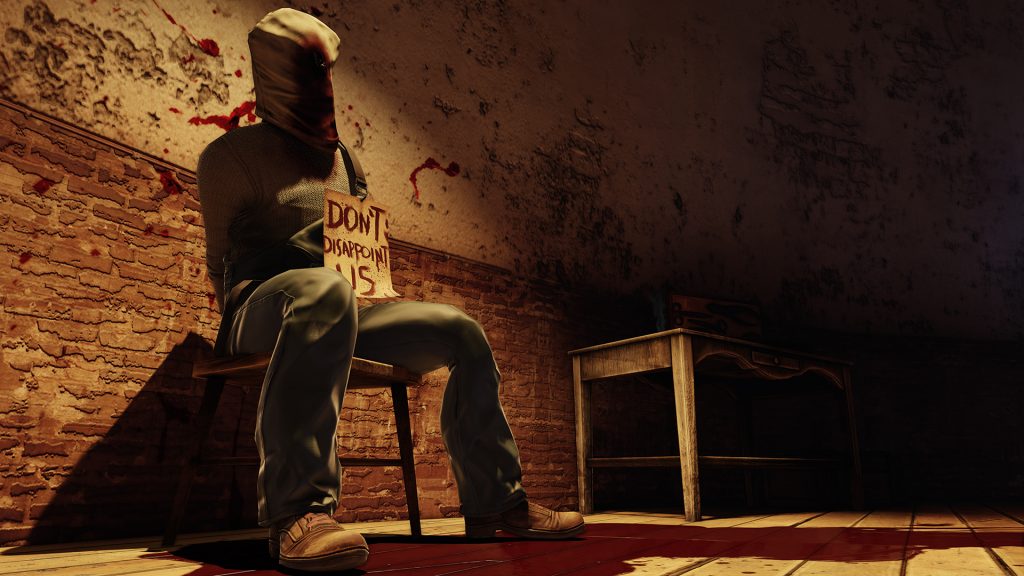 All of this is before even delving into the nature of Booker, the protagonist, Elizabeth, his bounty, and Comstock, the prophet who rules over the totalitarian theocracy of Columbia. We’re going to be delving into spoiler territory from here, so this is your warning to tune out if you haven’t yet played this game (and if that’s the case, I implore you to please stop reading here).

Still here? Okay, lets dig deeper shall we? When the player first experiences Bioshock Infinite, there are a lot of questions at play, and they begin to compound to a certain extent as the game goes on. Is Comstock really a prophet? If not, how does he know so much? What does the mark on Booker’s hand mean? What is the nature of Elizabeth, and who is truly behind Booker’s mission to rescue her? Questions like these urge the player to sometimes hustle through the game, in hopes of learning just a little more about what is actually going on in this world.

Much like The Last of Us, though players may be eager to rush to the end to see what’s going to happen, the incredible depth and detail of this world is worth exploring in its every facet, and while battles may sometimes feel like a needless detriment standing in your path to the revelations of the finale, the violent struggle of Infinite is an element as important as any other in the journey of Booker and Elizabeth. After all, this is a story that can only end in violence.

And end in violence it does, not just as Booker smashes Comstock’s head in on a bird bath, before strangling and drowning him, but also as Elizabeth martyrs the Vox Populi leader, Daisy Fitzroy, when she threatens the life of a child. Both deaths only further embolden the followers of their respective causes, continuing the cycle of violence, and even igniting it to become more bitter and bloody. 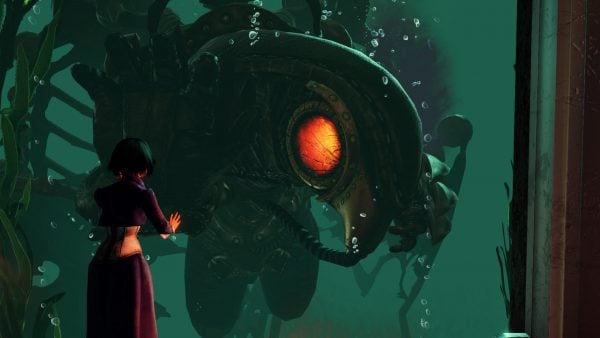 The final violence comes only when the final truth is revealed though. After doing his part at the Massacre of Wounded Knee, Booker threw off his mantle as a soldier, and sought redemption at a nearby river. There, he was nearly baptized before backing out of the deal. An alternate Booker, though, went through with it and was delivered unto God. He became the prophet, Comstock, and led Columbia into the skies.

When Elizabeth gains the full extent of her powers, and casts off the chains of slavery by drowning her protector and jailer, Song Bird, she sees time as a flat circle, and a thousand truths come flooding to her immediately. A thousand, thousand doors are opened up to other worlds. Other Bookers and other Elizabeths battle other Comstocks and Fitzroys, or join them, depending on the shape of things. One small change is all it takes to remake the world, for better of worse.

Booker goes through the final doorway only as the journey comes to an end, and sees the truth for himself. Confronted there by the daughters he had sold and abandoned and battled and controlled in a dozen worlds, he receives his final baptism, as his daughters hold him underwater, preventing Comstock from ever coming to be, in this world or any other. 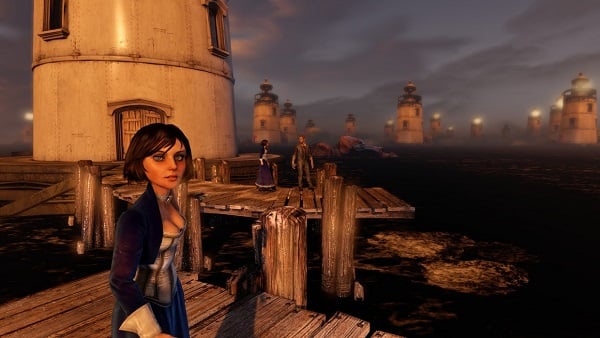 May the circle be unbroken? It’s not a song, it’s plea from a doomed prophet, and a lament from a fallen soldier, more akin to “may things continue as they are” or ‘may MY circle be unbroken”. Is it any wonder that it’s Elizabeth who sings the song when Booker picks up his guitar? Only she can break the circle after all, whether she wants the responsibility or not.

In the end, Bioshock Infinite holds up remarkably well, even years later and with full advent of a newer console generation. Even more enjoyable the second time through, Bioshock Infinite is a testament to the power of this medium to build amazing worlds and tell incredible, spellbinding stories within them.