It’s been on the minds of Zelda fans since the first footage of The Legend of Zelda: Breath of the Wild was shown at E3 2016. The original video shows a vast landscape with beautiful ridges and open grasslands; the ruins of what appears to be Hyrule tousled in the midst of such comeliness. Breathtaking as it is, the exact moment Breath of the Wild features in the timeline has pondered many questions, dividing avid fans into the three different timelines.

Surprisingly, there are even a few who believe it features before the divergence of the timeline. The unified timeline begins with Skyward Sword, released on the Wii in 2011, telling the tale of the defeat of the Demon King Demise. There are some that place Breath of the Wild after Skyward Sword. The similarities between the Hero of the Sky and the Hero of the Wild are certainly encouraging, plus the worship of Hylia seems to remain significant with many of the maps areas named after her. 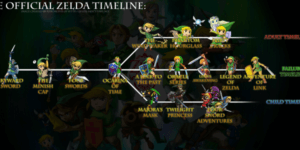 Where does Breath of the Wild fit in the timeline?

However, the prospect of Breath of the Wild being part of the unified timeline seems unlikely. The Temple of Time has already been seen in some of the footage, and that was built by Rauru sometime after Skyward Sword. More importantly, the main villain Calamity Ganon provides strong evidence that the game is featured sometime after Ocarina of Time. Also, the ruins shown in the Great Plateau seem to match up perfectly with that of Castle Town, suggesting the Great Plateau is Hyrule.

At the end of Ocarina of Time, the timeline is split into three different passages. After Ganon was sealed in in the Sacred Realm, Zelda used the Ocarina of Time to return Link to his own age before he drew the Master Sword. Link then returned to Zelda, and they convinced the King of Ganondorf’s treachery due to the pieces of Triforce they held. Since Zelda sent Link back in time, she altered the course of Hyrule’s history, forming the Adult Timeline and the Child Timeline. In the third timeline, Ganondorf defeats Link in an alternate reality, creating the Fallen Hero Timeline.

In a final stand against an impending doom, the Seven Sages sealed Ganon along with the complete Triforce in the Sacred Realm, transformed into the Dark World as a reflection of Ganondorf’s evil heart. The Dark World grew stronger, driven by the lust of the Hylians drawn to it by the lure of power and greed. Eventually, Ganon waged war on Hyrule once more, in an event called the Imprisoning War. Miraculously, the Seven Sages and the Knights of Hyrule were able to reseal Ganon in the Dark World. However, the power of the Seven Sages waned, and the Kingdom became a mere shadow of itself. 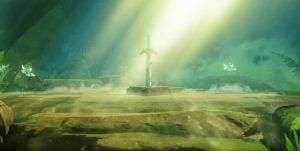 The Master Sword location is similar to that in A Link to the Past.

And a great decline of the Kingdom is certainly a major theme in Breath of the Wild. The old man who you encounter certainly talks about a decline in the kingdom and an abandonment of the city. An apocalyptic world would certainly match the setting of the period just after the Imprisoning War. Not to mention, the hairstyle of Link in Breath of the Wild matches that of every Link in the Fallen Hero Timeline!

The Adult Timeline can also be said to have its fair share of disasters. After Link returned to his own age, the Seven Sages weakened and Ganondorf managed to escape from his imprisonment. The people of Hyrule had hoped the Hero of Time would return but he did not appear. They were left to plead to the gods, who answered their prayers by flooding Hyrule, trapping Ganon and his army beneath the waves.

Curiously, footage has shown Link picking up rock salt, with a description suggesting it formed in the ancient sea. A clear reference to the Great Sea formed by the gods. There also appears to be a lot of water features present on the Great Plateau, as well as many ruins that could have been worn away by years spent under a vast ocean. 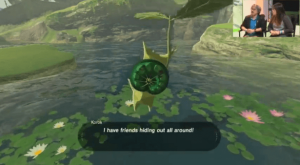 This sure seems to be Elma, first seen in The Wind Waker.

Away from the sea, and the similarities between the old man and King Daphnes seem way too convenient. Other than the appearance, if you slow down the old man jingle from Breath of the Wild, it sounds similar to the Hyrule castle theme often used to represent the King. The importance of the old man will certainly be momentous, and the possibility of royal lineage cannot be ruled out.

And certainly, the other side of Hyrule’s chronology has its fair share of royal drama. After the hero warned of Hyrule’s tragic future at the hands of Ganondorf, the King of Hyrule ordered his execution. The hero soon departed after, in search of his friend Navi, resulting in his disappearance into the parallel universe of Termina.

There are numerous justifications for Breath of the Wild’s apparent position in the Child Timeline.  Notably, a bridge that looks like the twin of the Great Bridge of Hylia is seen in some of the footage shown. The startling similarity is uncanny; the bridge even looms over a congruous lake. We’ve only seen the Great Bridge of Hylia in Twilight Princess, so it’s likely the bridge was made sometime between Ocarina of Time and Twilight Princess. The structure is therefore limited to the Child Timeline. 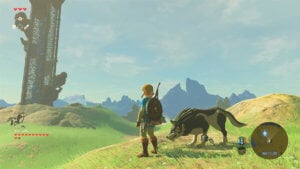 Even Eiji Aonuma, the producer of the Legend of Zelda series, hints at the Child Timeline placement. He said, “I’m working on the new Zelda game now…And one thing I’ve realized as I’ve been working on it is that a lot of the things I want to do with this new Zelda game are things I thought on while making Twilight Princess. I can’t talk specifics, but to me, Twilight Princess was a starting point, making it possible to do what I’m doing now in a way.”

Seems almost certified from the producer himself that Breath of the Wild is destined to happen after Twilight Princess. But a lot of things don’t add up, certainly the inclusion of the Koroks from the Adult Timeline. These Koroks are the same Koroks from The Wind Waker, that much has to be certain. So where exactly does Breath of the Wild fit in the timeline?

There are some that place Breath of the Wild in the Fallen Hero Timeline, just after Ocarina of Time, and just before A Link to the Past. Whilst the gloomy setting of Breath of the Wild fits perfectly, plus the location of the Master Sword brings a strong case, there’s just too many other reasons against it. The downfall could have happened in any timeline and the Master Sword’s appearance in the Lost Wood could have happened in the other timelines. Whilst maintaining a strong case, the other two timelines provide stronger evidence.

The problem lies with the Koroks and Wolf Link. Neither has been seen in any other timeline. Both timelines began with the defeat of Ganondorf and were created due to the manipulation of time. Controversially, Breath of the Wild could be set in both timelines. It might just be that time is realigning itself with reality, fixing itself and combining two universes into one.

In the likelihood that both timelines don’t become one, it’s more probable that Breath of the Wild features after Twilight Princess. Whilst the Koroks provide strong evidence for an Adult Timeline, it’s also possible that the Koroks could have evolved independently in both timelines. The idea of the Hero of Twilight appearing in the Adult Timeline is less likely, it certainly would be much more difficult to fathom.

Either way, Breath of the Wild has provided fans with a fascinating conundrum. The anticipation is heightening and March 3 can’t come quick enough.