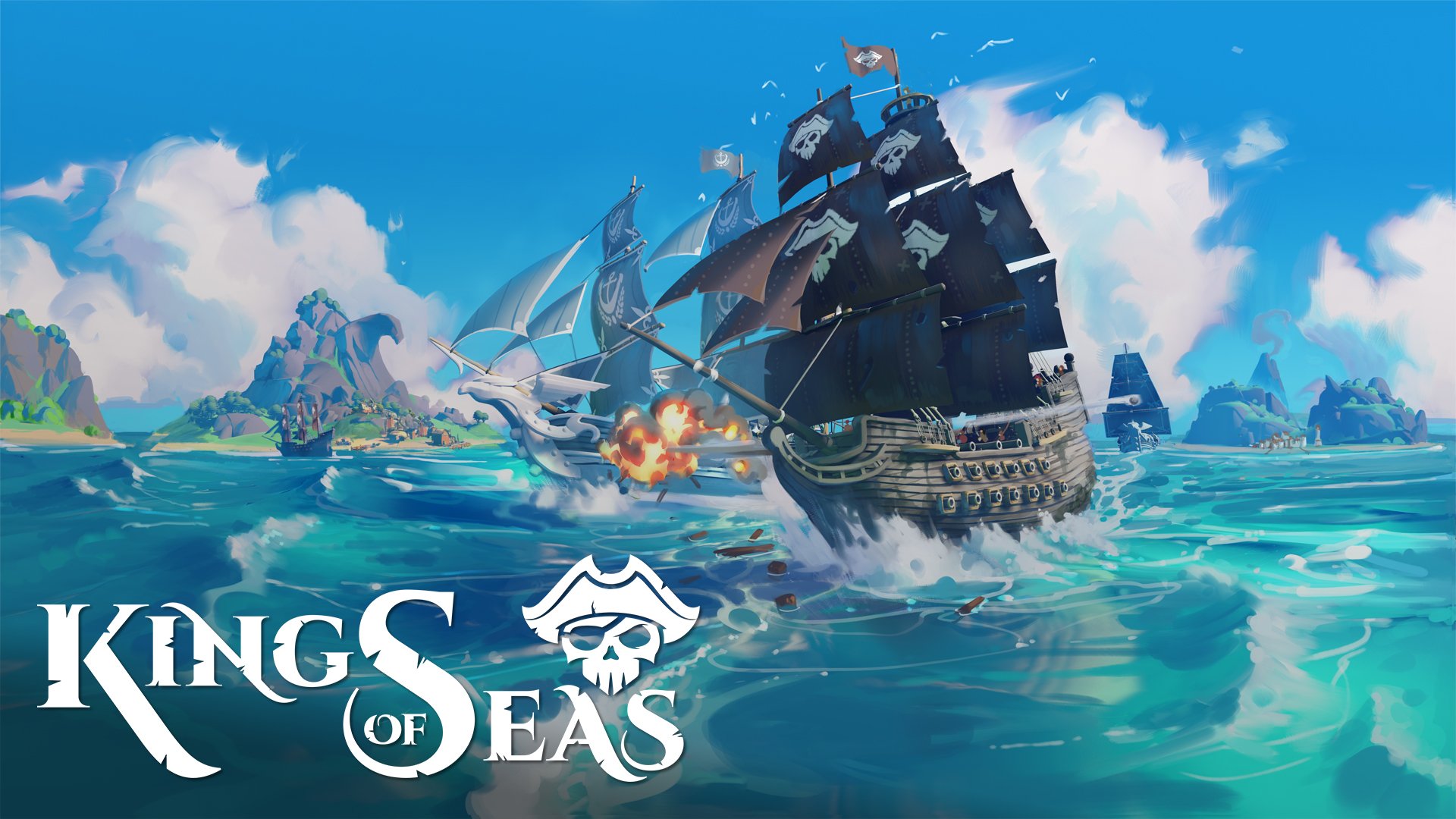 When thinking of pirates, there is probably an image or character that springs immediately to mind. Maybe it’s Johnny Depp’s unflappable Captain Jack Sparrow, wearing a dingy-yet-fabulous outfit and flashing a dangerously alluring grin. Maybe it’s the Jolly Roger, that iconic flag used as far back as the early eighteenth century by pirates to identify themselves. Or maybe it’s any number of moments from the 2013 entry of the mega-hit Assassin’s Creed franchise, Assassin’s Creed IV: Black Flag, where players control lovable scallywag Edward Kenway as he sneaks and stabs his way across the seven seas. King of Seas, not to be confused with Sea of Thieves or Skull & Bones, draws inspiration from pirate media of recent years and sets out to make its own mark on the gaming landscape. But charming as it is, this ship-to-ship looter-shooter is lacking in a few key ways.

Pirates and pirate-themed media enjoyed a brief resurgence in the early 2000s as the modern classic Pirates of the Caribbean swept cinemas. It seemed like pirates were the next big thing, but somehow all that sailing, stealing, and sashaying never quite translated to the medium of video games. Black Flag had its moment, but Assassin’s Creed as a whole has long since moved on to different genres and gameplay styles. King of Seas occupies an interesting space. Rather than letting players roleplay a pirate, with all the backstabbing and thievery that implies, the game instead is a top-down loot-driven shooter with pirate drapery. When it works, it really works, but players might be left wondering when the actual piracy begins.

The worldbuilding is strong at the beginning of the game. Thousands of years ago, long before the world was fully charted and magic stamped out, a loose consortium of pirates, sailors, and voodoo magicians roamed the seas. Vicious battles raged between pirates and navy sailors, and pirates were eventually forced to flee to the borders of the known world as the navy erected strict governments. Voodoo magic became a taboo thing of the past, as the titular King of Seas presided over a tentative peace. But that peace is shattered during a routine sailing errand by the King’s progeny. As the son or daughter of the King of Seas, the player is forced to defend their innocence after the King’s assassination. Forced to find sanctuary under the care of pirates, the player will do anything it takes to clear their name and take their rightful place as the next King of Seas.

It’s a dramatic plot, but the tone is surprisingly lighthearted. Character portraits are reminiscent of Brett Helquist‘s work on A Series of Unfortunate Events. The art is beautiful, but characters never feel particularly dangerous or dastardly. The result is a pirate game where the pirates feel like children’s cartoon characters, and the stakes never feel life-threatening. The player character may be desperately trying to uncover the facts behind a murder, but the cast of characters makes everything feel sweet. The main mechanics of King of Seas involves sending other ships to the depths of Davy Jones, but never in a way that feels particularly edgy or transgressive.

Sailing Against the Wind

Great ideas are nothing without a few key binding elements. King of Seas is full of interesting ideas and interactions, but it feels like something is missing. Pirates are known for acting with reckless abandon and devil-may-care attitude, but King of Seas is more concerned with minutiae. For a game that touts its commitment to role-playing and procedural generation, naval combat and loot collecting ultimately feel tedious and grindy. There are certainly some valuable doubloons buried in King of Seas, but most of the time it feels like players are following a worthless treasure map.

At its heart, King of Seas is a combat game. Players take control of a variety of ships, from the lowly sloop to the towering galleon. Each ship has its strengths and weaknesses in regards to power and maneuverability, and players are encouraged to customize their ships with different combat abilities and equipment. There is much more to keep in mind than simply equipping powerful cannons. Unique skills and talents must be utilized for captains to survive against other feisty combatants. Finding treasure and defeating other ships in combat earns players experience points; earn enough experience, and the player can level up. Earn enough levels and they can earn talent points, which can be spent in one of three skill trees. Talents range from faster navigation to more powerful cannon fire. The sea is a dangerous place, and players must keep their wits about them as they scour the ocean for ship parts and valuable gold.

While some of this scavenging is intriguing, it tends to fall flat during actual combat. The fundamentals are sound. Rather than simply assail enemy hulls with cannonballs, captains are encouraged to swap between different types of bullets to damage unique parts of enemy ships. Rip apart another vessel’s sails, and they’ll be dead in the water, unable to retreat. Pick apart their crew, and enemy ships will be unable to muster a counterattack when needed. These ideas feel fun in theory, but in practice, battles seem to be determined by which ship has more cannons and hull life.

Similar to how battles worked in Black Flag, it is difficult for ships to engage in direct dogfights. Rather, players are told to use the strengths of each ship to their advantage, lining up shots and deploying special skills. The speedy sloop can strafe through waves and weave around rocky outcroppings with much more agility than the ponderous frigate. But speed is meaningless without firepower to back it up. Battles often start off tense, but can quickly devolve into two ships circling each other as their cannon cooldowns recharge. What begins as a pulse-pounding encounter often becomes somewhat boring.

This is a genuine shame because there are some novel ideas at play. Savvy captains will always use the wind to their advantage, trimming their sails to speed up or slow down accordingly. It is even possible to lure other ships to a watery demise at the hands (or tentacles) of sea monsters. But after a few hours of playtime, King of Seas is laid bare. Sidequests are a little more involved than sailing from one side of the map to the other, and the colorful cast of beautifully drawn characters never really provides any kind of meaningful player interaction. It simply does not feel very pirate-y. There is little to no immediate satisfaction to be had anywhere, and the slow tutorial section is a big indicator of the rest of the game. Rather than raucous fun with cheeky pirates and sea shanties galore, players can find themselves roaming an empty ocean with no music whatsoever, searching in vain for another ship to engage in combat with or port to dock in.

King of Seas wants players to engage in trade, but it is often more lucrative to sell old ship parts than to barter goods. Buying low and selling high feels great, but good business decisions pale in comparison to simply selling obsolete loot at a premium. This the greatest flaw of King of Seas: the world is full of potentially engaging ideas that are undercut by other elements of the game. Rather than feel adventuresome and risky, the game is bogged down by mechanics that aren’t very satisfying overall.

That being said, the dialogue is often hilarious and the game looks beautiful. The ocean sparkles and shines, and there is always something satisfying about filling out an empty map. Certain ship abilities feel excellent to execute successfully, including a sail-destroying flamethrower that can only be fired straight ahead. But as often as King of Seas touches the excitement of an open-ocean adventure, it bumps up against the reality of incremental upgrades that don’t feel very significant and sidequests that rarely feel satisfying.