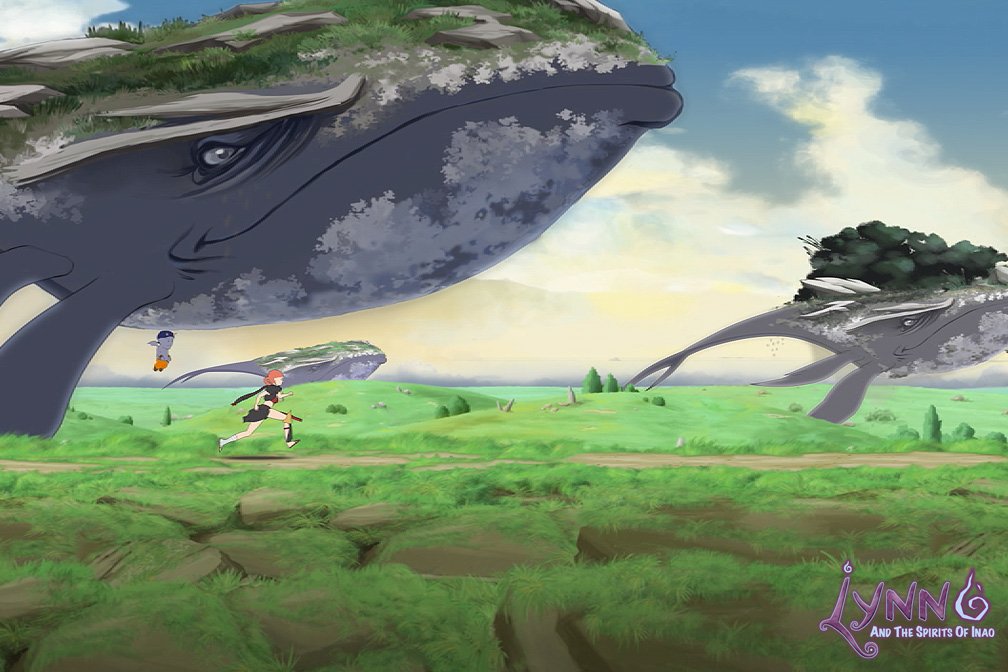 I don’t expect a lot from Kickstarter, but when I see a game that’s actually good, it’s a nice and rare surprise. Lynn and the Spirits of Inao from Bloomylight Studio is just such an exception. A beautiful and inventive fusion of magic world 2D platforming with Miyazaki-inspired spirits and monsters. A more lighthearted and comedic game, the player must help lost spirits find their way back to the afterlife while saving the world. There are many colorful characters and environments that look like they fell straight out of Spirited Away or Totoro. It even comes with its own discount Navi—maybe that’s not a good thing …

The game’s primary feature, which allows players to control the day night cycle, is very intriguing since the spirits come out at night. With the well matched music, Lynn and the Spirits of Inao is more than just visually stunning. Not much is known about the gameplay besides the description, which mentions an awful lot of fetch quests. With such a visually stunning sandbox it might not be so bad at first. Lynn and the Spirits of Inao has a lot of potential and I can’t wait to see it. For now you can read my interview with the developers at Bloomylight Studio below. -Where did the name Lynn and the Spirits of Inao come from?

From the beginning, we wanted to have the name of the main character followed by the adventure’s theme. We decided to call the game Lynn and the Spirits of Inao because it really suggests the journey Lynn is starting!

-You mention a few different inspirations for the game but what would you say inspired you the most?

Our main inspirations are Zelda : Ocarina of Time and Muramasa : The Demon Blade.

-What is the estimated run time of the game?

We cannot tell you precisely how many hours long the game will be, as it depends on both the budget and the development process!

-Is Aku the new Navi? A Navi players can abuse when annoying?

Yes, Aku is a navi-like sidekick!

-Getting 100% completion is mentioned a few times in the description. Is there some kind of alternative ending or bene?t to reaching 100%?

We would like to implement a new game+ for re-playability, and we have numerous ideas for the 100% rewards but again it depends on the budget ^^ -You mention there will be treasure, clues, and other collectables, but what are they for? Does the game have power ups or some kind of reward that players can buy to help with gameplay?

We cannot spoil about the rewards, but there is a shop where the player can buy items to help him during the game!

-Are any areas only night or day? While you mention the two worlds, real and spirit, overlay each other, will there be any parts that are one or the other?

Yes there are areas that are only night, like the festival we mention in the Kickstarter page, and many more but again we won’t spoil too much!

-Will there be any cutscenes or animation sections in the game?

There are cutscenes sections in the game, but they are not fully animated. We are planning to add some if we reach the given threshold!

-Will the game be more combat oriented, puzzle oriented, or a Zelda style mix? Can you explain more about the in?ltration sections?

The game is a Zelda style mix between combat and puzzle, but less combat oriented. During the in?ltration sections, Lynn can crouch in stealth to avoid being detected by enemies. For example, try not to awake a dangerous animal who is sleeping, by sneaking around him, or stay undetected by hiding behind objects.

-While the art is beautiful is there any concern it might be hard to see what’s happening with the camera so far out?

We ensure that everything on screen is visible and easy to understand for the player. There are two different cameras, one for the levels and one for the village, which is closer and offers a better view of all the details we put in it!

-How did you come to combine a fantasy world with Japanese style ghosts and demons? While a great combo, it seems a little out of the ordinary.

Lynn and the Spirits of Inao is inspired by Hayao Miyazaki, but more generally by japanese folklore and myths in general, with traditional monsters/spirits (y?kai) and traditional art from the Edo period.

-How many different monsters are there? Are any of them not evil?

We cannot tell you the exact number of monsters in the game, as it is subject to change! There is also a difference between the enemies you ?ght and neutral spirits that are part of the world! -With the player changing time from day to night constantly does that affect time in the game as well? Or are NPCs just like, ‘Lynn must be messing with the laws of nature again.’

The night and day switch affects time in the game as well! If you switch to the night, villagers will go to sleep and spirits will start to appear…

-How long does the day/night cycle last naturally in in-game time?

We are still in the testing phase for the cycle duration, so we can’t be precise about this, but it should be around a few minutes.

-While the random climate system is a neat idea, how many different weather conditions will there be? How often does the weather change?

There are 4 different climates : fair weather, cloudy, rainy and foggy. As for how often does it change, we are also in testing phase!

– How many NPCs will there be? Is any part of the game dubbed or is it all in subtitles?

Taking into account both villagers and spirits, there are more than 30 NPC’s in the game. We would really like the game being dubbed, but it’s not on our budget right now! -What can players expect to ?nd in the exclusive zones?

-How much of development is left to complete?

The game is currently in pre-alpha status, and we are hoping for a release within the next year!

-How can Aku make a V symbol with his hand when he has no ?ngers?!

Ahah, our little Aku is full of surprises! ^^

-If Lynn and the Spirits of Inao is funded what do you hope to get out of it?

We would like the game to be a tribute to Hayao Miyazaki’s work, and also the best 2D gaming experience we are able to provide to the players!

-Any future games in the works?

If our dynamic duo Lynn & Aku is successful among the players, we might keep up the adventure with them. There are still so many possibilities and paths to explore… 😉

For more on Lynn and the Spirits of Inao, check out the Kickstarter page.

Update: the Kickstarter campaign has been canceled after a number of interns made surprising allegations against Bloomylight Studio and founder David Tollari. Keep your eyes open, and we’ll post anything more that we find out about the fate of the game or Bloomylight.