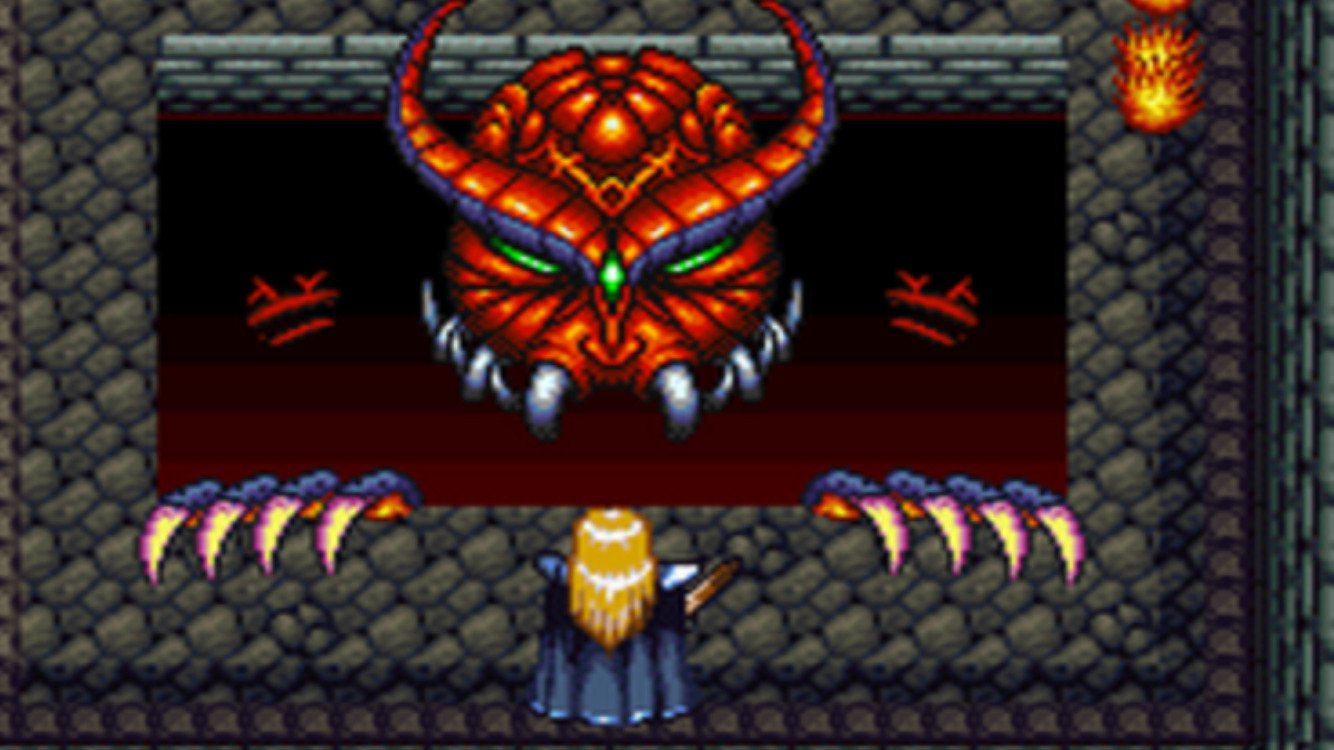 “No matter what kind of world people have, if they think they’re happy, they’ll be happy.”

The passage of time is as inherent as it is unrelenting. Man is born only to die, empires rise only to fall, and history is made only to be forgotten. Time, as a concept, is overwhelming, overbearing, and frankly difficult to comprehend in its totality. Time makes no promises. Life will not necessarily get better with time. One’s suffering is not guaranteed to end in time. The only certainty that time brings with it is the promise that life will change. Which is exactly the core premise of Illusion of Gaia.

Time affects everyone and everything, and the only influence someone has over time is deciding what they do with their time. Of course, being the hero of an RPG, protagonist Will’s adventure is a rather rebellious one that sees him actively fighting against the onset of time, but Quintet takes a rather candid approach to how the narrative reflects on the concept of time. Yes, time is often cruel, but time also allows a boy to grow into a man, a girl to find her place in the world, and a world to evolve towards a new era.

Like Soul Blazer before it, Illusion of Gaia takes a rather candid and mature approach to how it addresses its core theme. Although its localization isn’t nearly as good (barely just serviceable,) the central narrative is strong enough where it can make up for any nuances lost in translation. Illusion of Gaia is very visual when it comes to its story. There are quite a few moments when the text dominates the game’s pacing, but, for the most part, Quintet makes smart use of its set pieces to weave a tale that’s centered around time. Quite literally. Unlike most RPGs, time is a constant presence in Illusion of Gaia.

Will never shies away from letting audiences know just how long his adventure is taking. Early in the game, he and co-lead Kara are lost at sea for three weeks with players maintaining control during their voyage. Later on, Will and friends are lost in a cave for days on end. While the sequence isn’t as played out as the former, players do take control of Will during this time, allowing for some reflection on the passage of time. Far too often, RPGs— especially those of the era— simply allow the sun to rise and fall in order to telegraph the passage of time through shorthand, but Illusion of Gaia uses time as a means of character and plot development.

Will and Kara develop a romance not because they’re compatible, but because they spend three weeks alone together (and perhaps due to some light destiny.) Will doesn’t mature because of some crucial moment in his journey or arc, but because traveling the world for months while witnessing tragedy after tragedy will force anyone to grow up fast. It’s this emphasis on time that separates Illusion of Gaia from other coming of age narratives. Just about every member of the main cast grows up in some sense over the course of the game, but almost exclusively because it’s time for them to grow up.

Spending so much time with Lilly, Lance feels himself develop into a more in-tune and responsible young man. Growing up in the story proper thanks to an actual birthday the cast celebrates, Lilly lets go of her insecurities and stops using Will as a shield from the rest of the cast, personified through her relationship with Lance. Neglecting his family and home life for years, Neil laments how he distanced himself from his parents and accepts that it’s time for him to inherit the family business.

In the same way, most NPCs in Soul Blazer philosophically reflected on death, NPCs in Illusion of Gaia make mention of time rather often. Of course, due to the poor translation, said mentions aren’t nearly as insightful as they were in Quintet’s previous action RPG, but the script still manages to convey the importance of time as a theme. When NPCs do mention time, they’re prone to a bit of morbidity. In one of the last towns Will visits, an NPC tells Will that the women in his hut were born to weave carpenters for 40 years. While cruel enough in its own right to be born into decades-long servitude, the NPC twists the knife further by telling Will to remember that not everyone is born into a fortunate life.

Perhaps in another, lesser, RPG, this would result in Will saving the women from their fate outright, but who is he to fight against a culture behind the times? The very nature of Will’s journey likewise pits him against the clock. With a comet on its way to Earth, it’s only a matter of time before it forces mass evolution at a rapid rate, destroying Will’s world as he knows it and ushering in a new age without him or humanity. Humanity’s time has come to an end, but Will refuses to accept his fate.

Even then, fighting against the tide of time doesn’t result in a happy ending for Will or the world. In defeating Dark Gaia, the world nonetheless changes. Humanity remains intact, but time races forward to the late 20th century, leaving the fantastical setting behind. Trees are replaced by buildings, rivers by roads, but humanity remains. Will and his friends are together in this new world, but with none of their memories of the past. Will can fight fate, but he cannot fight the passage of time. One of the last sequences in the game sees Will and Kara witnessing the continents rifting rapidly from outer space, further cementing time’s presence in the overall story.

Just like how Soul Blazer integrated death into its core gameplay mechanics, so does Illusion of Gaia integrate time. Unlike Soul Blazer, however, Illusion of Gaia takes a more abstract approach to its theme. For most of the game, combat and dungeoneering are shared between two playable characters: Will and the Dark Knight, Freedan. A much taller and older character, Freedan, is heavily implied to be an older version of Will himself, willed into the world by Gaia in order to help Will on his quest. It isn’t exactly time travel, but— much like how The Legend of Zelda: Ocarina of Time would use the same concept on a thematic and gameplay level years later— Freedan’s presence does tie into the overarching theme of time while giving players some much-needed gameplay variety.

More importantly, time as a concept through gameplay comes not from the literal passage of time, but from reflections on eras of time. Every major dungeon in the game owes its influence to a different culture in history. Will traverses Incan Ruins, fights his way through the Angkor Wat, scales the Great Wall of China, and solves the riddles of an Egyptian Pyramid. Even the Sky Garden, the game’s most fantastical dungeon, is clearly based on the Hanging Gardens of Babylon. While most dungeons in the game tie into the theme of time by simply being an area out of time, the Incan Ruins go one step further by having Will interact with the Incas.

Upon completing the dungeon, Will meets the people of the Inca Empire, ready to sail off into the new world. On the ship, multiple NPCs interestingly allude to Will being the lost emperor of the Inca people. Considering Quintet’s heavy usage of reincarnation in their games, playing a key role in both Soul Blazer and Illusion of Gaia’s ending, it can be taken quite literally that Will is the reincarnated Inca emperor, reuniting with his people one last time before continuing on his quest. It’s a moment that gets little to no narrative focus, but it’s an important thematic moment.

Time as a concept isn’t just about the linear or literal passage of time, it’s about looking back on what’s been lost to time. The Inca are gone; the Angkor Wat is littered with zombies and decay; the Pyramid is a testament to what happens when one’s time is up, and the Nazca Desert serves as the only proof that the Sky Garden ever actually existed. Time leaves history, culture, and people behind. The very ending of Illusion of Gaia suggests that Will’s journey, his struggled, and his past have all been lost to time in order to make room for a modern, industrialized age.

So long as people think they’re happy, they will be happy regardless of what time has taken away. But this is the wrong message to take away from Illusion of Gaia. Time marches on, but that doesn’t mean history needs to be forgotten. Before their reincarnation, Will tells Kara that he will find her in their next life. They might not remember each other, but he vows to track her down. After the credits have rolled, after the world has turned over, Will is reunited with those he lost. Time might pass the world by, but there will always be friends finding each other, there will always be couples falling in love, and there will always be a reason to reflect on what’s come and gone. That is the illusion of time Illusion of Gaia wants its audiences to reflect on.