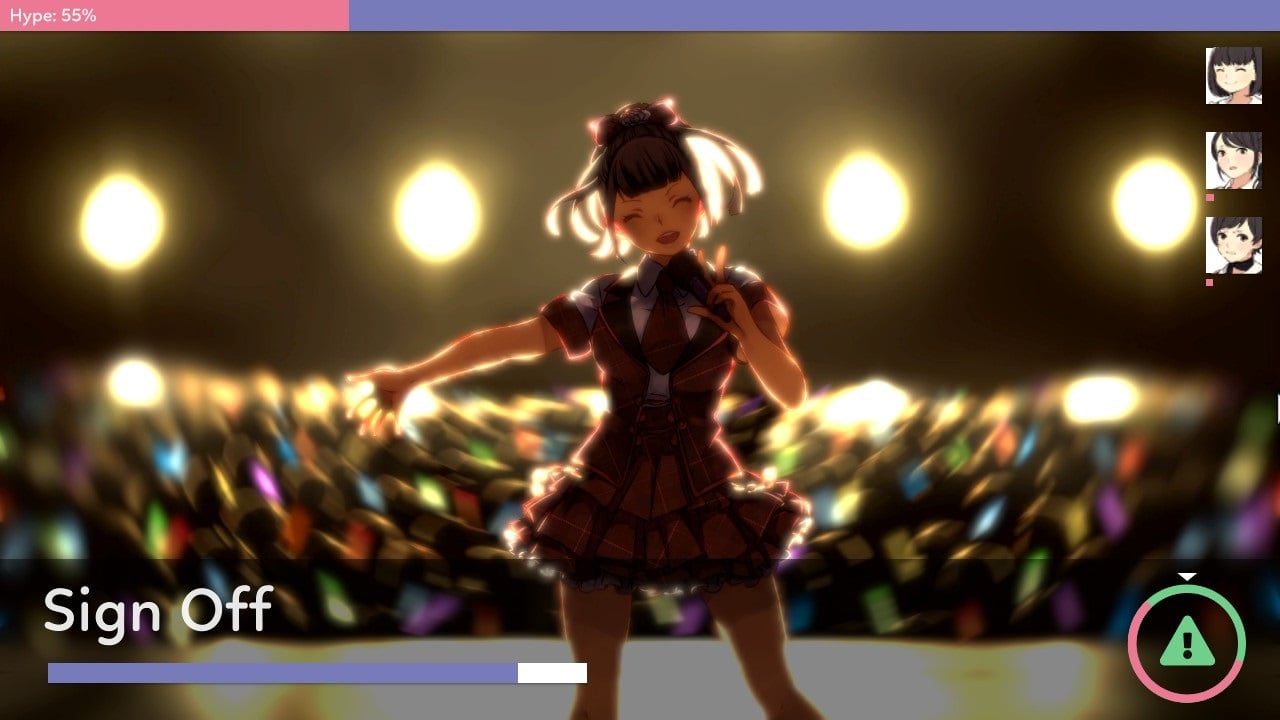 While K-pop groups like Blackpink and BTS are credited with popularizing idols in the West, the concept of idols and idol culture originated in Japan and continues to thrive there. Idol Manager is all about creating the next big group to top the charts and sell out arenas while navigating the cutthroat Japanese idol scene. It’s a harsh but unrelenting look at all the behind-the-scenes work that it takes to make it to the world stage, and it’s an absolutely addicting (if not soul-crushing) experience.

Idol Manager offers two modes: Story and Free Play. Story is a fleshed-out adventure that provides a premise, gradual goals to work towards, a rival to defeat, and visual novel-like story scenes that tie everything together. Free Play is all the simulation elements without the narrative framework. Since there are literally no other differences, the story mode is highly recommended for a first playthrough (especially since it contains a lengthy but thorough tutorial).

An Idol and a Dream

A businessman is down on his luck after having a series of shady massage parlors raided and shut down by the police. He’s left with a vacant building that’s steadily depreciating in value the longer it’s unoccupied. That’s where the player comes in: a plucky upstart raring to get into the idol industry with little to no experience or capital. Desperate to fill the space and willing to take a chance on a new venture, the businessman offers the use of one floor rent-free and several million yen for startup costs before leaving players to reach for the stars.

For as unrealistic as this premise is, Idol Manager is surprisingly realistic otherwise. From the very start, players are faced with the harsh realities of running a business from the ground up. The core of this struggle is in the management of two resources: money and idol stamina. Starting out, players can only earn a small amount of cash for every performance and a handful of fans when out promoting. The larger the fanbase the more the group gets paid, and the more publicity the group gets the more fans they earn. Fans can be generated in a multitude of ways that mirror real life: photo shoots, advertisements, internet shows, or just plain appealing to people on the street. Hiring a talented manager is crucial for landing many of these opportunities, but it’s more economically viable to start out with a cheap novice manager that improves over time and grows with the business.

Even if one of the girls do land a spot in a magazine or TV drama, every gig comes at the cost of precious stamina. Aside from the very start of the game, Idol Manager goes out of its way to drive home how incessantly exhausted idols are on a daily basis. The need to have a steady flow of income (28 days in the red and you go bankrupt) means players have to try and secure as many deals for the girls to work as possible. Once stamina starts to drift into the single digits, however, they’re much more likely to get injured and go on a forced hiatus.

Idol Manager follows a clear-cut format for building an idol agency, and there are certain basics that can’t be avoided. The first step is always holding auditions for new talent, which can be held at the local, regional, or national level depending on how much players are willing to spend. Every round of candidates is presented as trading cards with various attributes and different rarities; silver and gold cards contain the best of the best, whereas regular cards have more run-of-the-mill stats. Aside from attributes, each has a special personality trait that can either make them an asset or a hindrance. These different factors mean that even gold cards may not be desirable depending on their specialties and personality quirks.

These attributes bleed into every facet of establishing a dedicated fanbase. Be it genre of music, choreography type, or lyrical content, most of the decisions you make are tied to approval percentages for groups such as teens, young adults, adults, male, female, hardcore, and so on. Want to establish a mostly female audience? Make R&B music with rebellious lyrics and a “Cool” style. Want to appeal to a hardcore, mostly male audience? Make sure the lyrics are cute and the choreography is sexy. The more the idols in the group align with the image you’re trying to convey, the more successful they’ll be.

Decisions like these even go down to the outfits the group wears while performing (skirts without safety shorts may please male fans but will disgust female fans) and how much security is at meet and greets (light security is dangerous for the idols, but tight security turns off the hardcore audience). It’s a delicate balancing act that forces players to constantly reevaluate what image they want to pursue and at what costs.

Unfortunately, this demographic system is somewhat constrained by Idol Manager’s progression parameters. No matter whether it’s Story or Free Play, there are set milestones that need to be reached to achieve success. These start out with simple requirements (hire three idols, release a single, etc.) but quickly move into more restrictive territory. For instance, an early milestone is to start a radio show. However, radio shows primarily appeal to Adults and actively push away Teens. So if players have been appealing to a Teen audience up to that point, they either have to make the girls spend stamina on a show that turns off their target audience or miss out on unlocking the next tier of growth. Having goals that shift depending on the demographic players are pursuing is sorely missing here.

This forced framing is also present when it comes to managing facilities. No matter what, every idol group in Idol Manager needs a manager, music producer, and choreographer, and each of these need their own offices and studios. This makes runs a bit restrictive since the lion’s share of seed money is always siphoned into these at the start no matter what. Even though a real life group doesn’t necessarily need a choreographer until they start releasing music videos and performing live, Idol Manager requires there to be an in-house choreographer to research routines to go along with every song put out. Some flexibility here to invest in something like choreography later on would’ve been welcome for build diversity.

Beauty in the Progress

For all of its mechanical constraints, Idol Manager nails the ups and downs of success. Investing in research to carefully keep tabs on the latest trends and using that to produce the perfect rollout for a new single never stops feeling rewarding. On the other hand, fighting tooth and nail to generate enough money to put on the group’s first concert only for it to be plagued by technical issues and barely break even felt appropriately devastating. In other words, it’s easy to get invested in the success of the group the longer you manage them and the more adversity you face on your rise to the top. Be it the stress of events, media snafus, or random substories (Yakuza style) that hone in on the personalities of the girls, Idol Manager does just enough to get players invested without overtaking the core sim elements.

Idol Manager is dense and tough, but it’s also well-written and its systems should immediately hook any business sim fan. Its shrewd look at the Japanese idol industry is illuminating without getting too gritty or dark, and the bits of story that pop up bring a nice slice of life element that both adds levity and gives the girls some personality. Even if you’re not a fan of an idol group or pseudo-idol organization like Hololive, this is an easy recommendation.