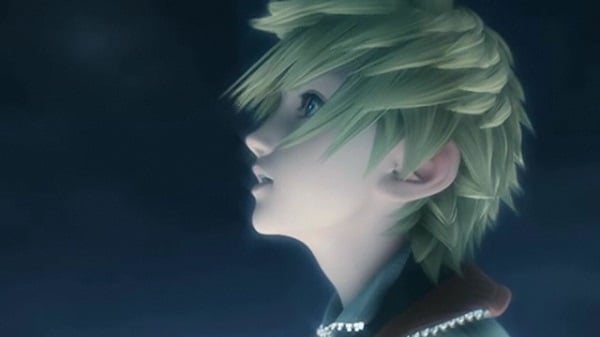 Kingdom Hearts is a series in which the plot is constantly in a state of conflict with itself. At the center of this conflict is a level of tonal inconsistency that is put into place by even choosing to merge the happy-go-lucky innocence of Disney with the moody and brooding, self-serious Final Fantasy franchise to begin with. The vast difference between these two worlds, and further, between the various Disney worlds themselves, feels at odds with the often dark beats of the story’s proper canonical elements, like the darkness in human hearts or the jealousy of a spurned lover. Never is this massive disparity made clearer than in the case of its two principal characters, Sora and Riku.

Though the plot of Kingdom Hearts in its many iterations is clearly a story predominantly about Sora, starting with the second game (Chain of Memories), Riku, the obvious fan favorite became playable to some extent. In fact, his adventure made up a full half of that title and was actually far more intriguing than the main tale told via Sora’s half of the adventure. So what was it that made Riku so enticing to fans, so much so that he went from being an antagonist to protagonist without missing a beat? Well, to answer that question, we first have to look at the problems with the character of Sora.

Sora, as a character, has many of the same issues that plague an icon like Superman, in that he’s always expected to be the very picture of innocence and virtue in any given situation. This allows for a more morally-conflicted and ambiguous character, such as Riku, to become a much more interesting and relatable mirror for the player, much like how comic fans flock to the more nuanced portrayal of a character like Batman. This is because a squeaky clean character is almost impossible to identify with, and this leads to a huge gap between any layer of a mature audience and the character in question, in this case, Sora. This leaves Riku, who spends the vast majority of the first game as the primary antagonist, still appearing as a more likable and interesting character than Sora, even though you go literally 5-10 hours at a time without even seeing him during the adventure. When the audience relates more to a villain that is only in a few sparse hours of the entire runtime than they do with the protagonist of the entire game, that’s a problem.

This issue and the disparity it causes are further compounded by Kingdom Hearts II, a game that only pushes these characters further in their respective directions. While Sora is saddled with a quest that is more or less an exact replica of the first games, the search for Riku and Kairi, Riku becomes a major background character, one we don’t even realize we’ve met at all until very late in the game. Appearing with the unwanted facade of Ansem throughout almost the entire game, Riku is a character who has literally given up everything in his quest for redemption, resigned now to take the appearance of both of the primary antagonists (Ansem, and the Organization, respectively) even as he’s constantly working to aid Sora and bring down the Nobodies once and for all, thanklessly, and unseen.

Even Roxas, a character who plays an even smaller role in the game than Riku, is more relatable than Sora, mainly because, like Riku, he actually makes a real choice, and further, one that has dire consequences for his existence. The tragic arcs of characters like these are what allows them to be intriguing fodder for the audience, characters we actually want to know more about, rather than being beaten over the head with their constant paragon and saint-like character traits. We, as humans, are filled with flaws, and behind us, in our lives, is an unending trail of mistakes we have had to live with and learn from in order to become people we can even be okay within our day-to-day lives. Sora has none of these qualities; he is never tempted, he never falters, and he doesn’t even have to try and do the right thing. Even more, telling is that he never has to suffer for any of his ignorance or simplicity, instead always coming out as heroic and well-liked by every hero, protagonist, and icon in the series despite the completely unrealistic arc he inhabits.

What the creative forces behind the Kingdom Hearts series fail to understand their key character is that without a struggle, without a real feeling of peril for this character, and without any real suspense or personal conflict in his epic journey through time and space, his final destination only becomes less and less relevant to the audience, while the secondary characters, like Roxas, Riku, Namine, and Kairi become only more interesting in their absence from the majority of the adventures. This is why a game like 358/2 Days can become infinitely more satisfying from a plot standpoint than vast swathes of the properly numbered titles, even in spite of a boring and well-worn campaign exploring worlds we’ve seen countless times before. Even as a mirror image of Sora, Roxas struggles in his choices, between his friend Axel and his love interest Xion, and between his own desires and what’s best for the universe at the end of his story.

Since the upcoming Kingdom Hearts III, most likely set for a 2017 release, is purported to be the end of this entire arc of the series, and essentially the entire central plot as we know it, it will be far in the best interests of series-helmer Tetsuya Nomura and co. to either focus more on characters like these, or to add a few more layers to the notoriously dull trio of Sora, Donald, and Goofy, though heaven knows it’s probably far too late for that.

In real life, each of us struggles every day to be a decent person, someone we ourselves would respect, hope to meet, or at the very least, like and relate to. If Nomura and co. want us to have a real investment in a tentpole character like Sora; they have to risk allowing him to be unlikable from time to time, as a complete lack of failures, mistakes, or conflicts leaves him completely absent of the notion with which we struggle every minute of every day, that of the human condition.