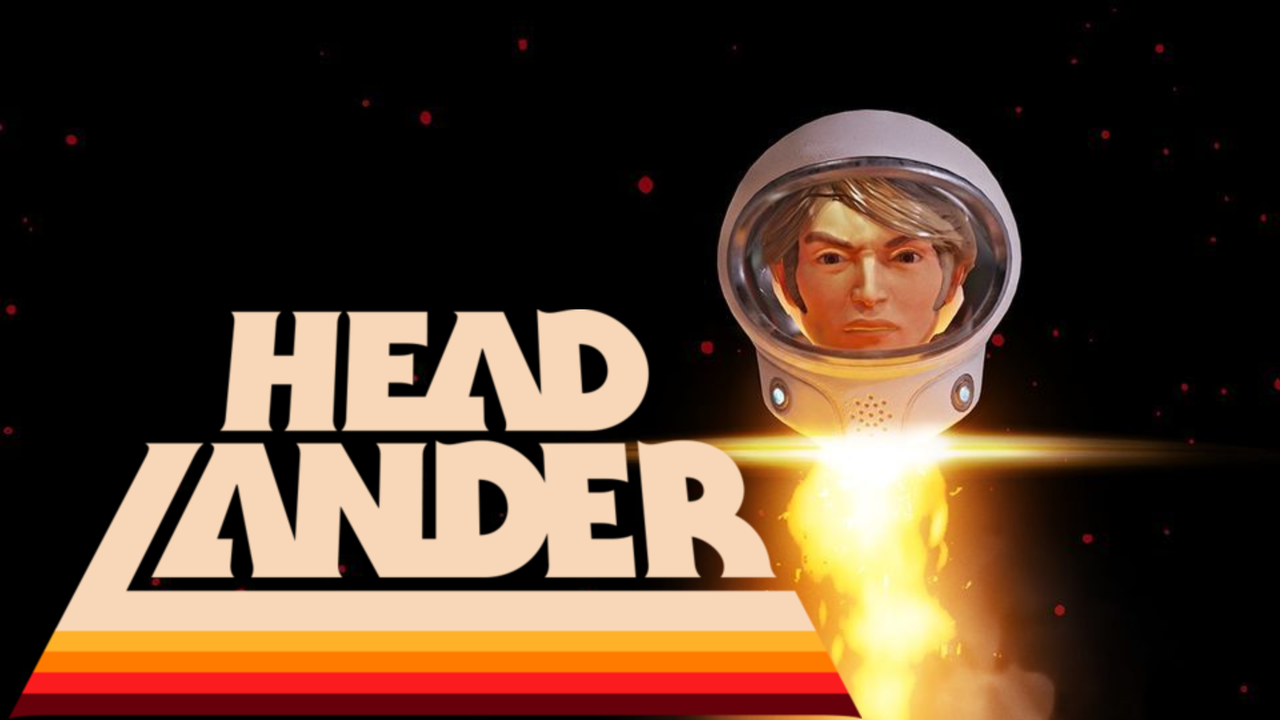 From the minds behind cult classics like Psychonauts and Brutal Legend comes the new retro-futuristic action-adventure game Headlander. As a huge fan of Double Fine Production’s previous projects, I couldn’t have been more excited to play their take on a 2D world based on 1970’s science fiction. Set aboard a robot-run space station after the cataclysmic “ever-war” destroyed the planet, you play as the disembodied head of the last living human on a comedic journey for answers. Hunted by the rogue artificial intelligence METHUSELAH, you’ll have to fight off hoards of mind-controlled androids, solve unique puzzles, and navigate a world of steel and fiberglass to save humanity. Although it has the classic Double Fine charm, the game spreads itself a bit too thin across several genres and ideas to ever reach the heights of the developer’s landmark titles, or even more recent puzzle/adventure masterpieces such as The Swapper and Inside. 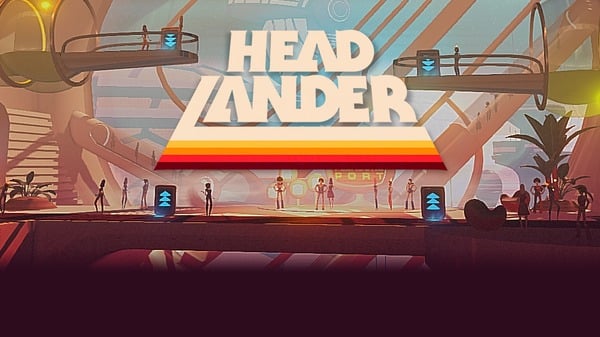 One of the areas that Headlander prides itself on is the incredible retro-futuristic presentation and setting, and with good reason. Not only do the game’s graphics significantly differentiate it from other titles in the same category, it tremendously helps the player during gameplay. Similar 2.5D platformers often have a problem communicating to the player which objects are in their path and which are in the background/foreground, but here, Double Fine distinguishes between the two using bright colors and lighting to clearly highlight what is intractable and what is a part of the window dressing. The use of color in particular is vital to many of the game’s puzzles, and each is explicitly made to pop off the screen to avoid any confusion. Additionally, the multitude of robotic bodies that the protagonist must switch between over the course of the game is diverse enough to avoid confusion, immediately letting players know what they can and can’t do simply from visual cues. The early sections of the game, such as the opening escape ship and Pleasure Port, are stunning levels that show off exactly what the game was advertised to be: a deeply satirical take on 70’s sci-fi, complete with a believable world run by robots. However, the level design and character appearances take a steep dip in quality as later areas begin to look like stereotypical industrial outlets or generic sci-fi fare. The final area in particular is somewhat disappointing, as it’s essentially a slightly more technologically advanced “mad-science lab,” and completely barren of NPCs to interact with, outside of the underwritten villain. By the time you’re halfway through the game you will have heard all the quips from NPCs worth mentioning, and lines are bound to repeat themselves quite often, without ever really adding to the experience. Although the game oozes style, it doesn’t fully commit to maintaining it for its duration.

While Double Fine Productions is known for its amazingly written stories, Headlander suffers from a bit of an identity crisis that keeps it from reaching the narrative heights of games like Psychonauts or even Brutal Legend. The basic plot revolves around the protagonist’s disembodied head being shepherded across the robotic dystopia by a futuristic trucker-type character named Earl, in search of saving the population from the oppressive METHUSELAH. After an immersive start featuring an escape from a spaceship under siege, the game loses its sense of urgency and begins to attempt to be more comedic, but it only becomes a very surface level parody of various sci-fi ideas. It’s a shame that such a fantastic premise is so underused for the majority of the game. The flavor text and gags are up to Double Fine’s standards, with a few standout moments occurring in the early levels, but the actual main plotline is uncharacteristically dull. Outlandish sections of the space station like synthetic drug dens and futuristic dance clubs could be entire stories in their own right, but only have one or two NPCs in them with anything of substance or wit to say. This is further undermined by the lackluster dialogue system, in that there isn’t much of a dialogue system to begin with. Double Fine decided to break up every major dialogue sequence with prompts asking the player if they want to continue the conversation, which is truly bewildering considering that there is literally no other way to advance other than to listen to these stretches of exposition. 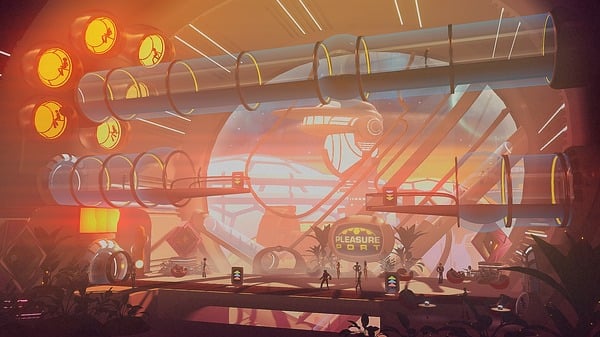 There are interesting concepts like an oppressed population of robots, a mysterious total disappearance of humanity, a rebel army of androids, and rogue AIs around every corner, but none of them are given the time or detail they need to really develop. Promising characters like Earl, the female rebels dubbed “The Daughters of Lucia-13,” and even the omnipresent villain all fail to make crucial moments feel meaningful thanks to a tone that can’t decide how serious it wants to be. Some crucial moments occur in the middle of long-running comedic sections, and other huge gags take place during serious missions. While this isn’t inherently bad, it feels like the writers just couldn’t strike the right balance between a lighthearted adventure and dystopian mystery. The final segments drop the charm of the early game entirely, trying to be more serious, filling the player in on the game’s lore or reminding them of how special the protagonist is. This all culminates in an incredibly uninteresting ending that falls flat on every level, failing to bring together hanging plot threads or make the existing ones seem relevant in a satisfying way. After the credits roll you are immediately thrust into a post-game world that is hardly changed by the primary conflict, even after it has been totally and unambiguously resolved (although there are a few hilarious easter eggs for classic sci-fi fans). Despite a great premise and an amazing track record, a schizophrenic tone and bland writing keeps the story of Double Fine’s latest from the success they are used to.

What the game lacks in a narrative perspective it attempts to make up for in the mechanical department, with mostly positive results. The concept of a rocket-propelled, disembodied head solving puzzles by rapidly switching between decapitated combat droids is used to great effect for the majority of the game, giving Headlander a unique sense of gameplay that is unlike anything I’ve played in recent memory. Puzzles and map progression are easily the strongest aspects of the game. Most puzzles revolve around navigating the increasingly complex space station by obtaining certain colored robot bodies to unlock their corresponding doors. These segments are at their best when you have to alternate between multiple bodies with different abilities to clear a path, access a computer, or destroy a part of the ship. The juxtaposition between playing a more maneuverable but indefensible head and a battle-ready but anchored robot keeps the player on their toes and is a constant change of pace. New mechanics are introduced at evenly spaced intervals that keep the gameplay from becoming tedious. Some of these re-contextualize your protagonist’s abilities and make sense of older, impassable puzzles, but other segments like the absolutely abysmal Chess Arena grind the game to a halt and needlessly complicate things. 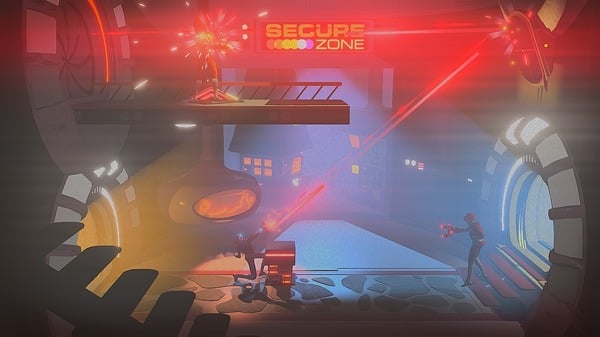 Level quality is somewhat uneven, with interesting interconnected puzzle zones being immediately followed by uninspired combat sections and boring labyrinths. Once the game begins to put an emphasis on combat, its flaws become much more apparent. Although Headlander is advertised as an “action-adventure” game, the “action” isn’t as up to par as the “adventure.” Aiming is incredibly slow and imprecise (more so on controllers than keyboards, but then you’ll have to deal with the insurmountable task of maneuvering through bullets hells with the arrow keys), making both target puzzles and gunfights frustrating. Cover is practically useless after the opening 20 minutes, as it only covers you from one side, and the screen quickly fills up with rebounding lasers that can’t really be avoided in many ways. Certain areas feel unfair, giving you few movement options and an absurd amount of enemies. Conversely, some levels such as the Landing Pad are so barren and uninspired that they can be flown over or avoided entirely. By far the weakest parts of the game are the arbitrary middle and final boss fights, both featuring insta-kill attacks and additional hazards that reset the entire fight. These bosses aren’t even particularly challenging or interesting once you figure out how to fight them. While you could argue that they’re just “aggressive puzzles,” they feel shoe-horned in, as though the developers couldn’t find a more interesting way to end their game.

The upgrade tree is yet another series of hit-or-miss instances. The choice to upgrade what you want is usually an illusion, as key upgrades are actually required to complete the game. Some abilities directly contradict other mechanics, such as the sentry upgrade (that can accidentally destroy crucial robot frames by mistake) and charge lasers (that make early game patrols almost as effective as endgame soldiers). Other upgrades like robotic invincibility, improved roll, and bullet time are so blatantly overpowered that they render half of the game’s mechanics useless, as you can become nearly unstoppable. Since the game has a plethora of XP caches and health/shield boosts hidden throughout the world, I feel like the essential upgrades could have just been given directly at these stations to streamline things, but some players will likely enjoy the integration of some RPG mechanics.

As perplexing as the half-baked upgrade system is the world design. While the game undoubtedly fits the “Metroidvania” moniker, it doesn’t feel like it makes use of it, or even really needs it. For starters, the actual game doesn’t require backtracking aside from the occasional side quest, as the story divides the game by section anyway. These side quests that do require returning to old areas are one of the weakest parts of the game, and mostly feel like padding. Teleport stations lessen the tedium, but they bring up one of my largest personal grievances with the game: unnecessary color-locked doors that inhibit the fast travel. I get that getting into the teleport rooms should be a challenge the first time you find them, but there is no excuse for making players repeat lengthy puzzles to re-enter a room they’ve already proven they can get into. 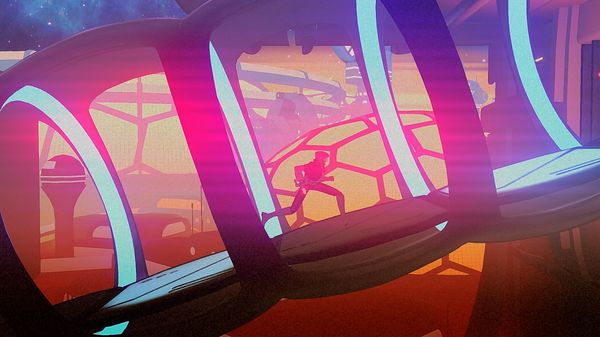 Even with all the flaws mentioned above, I couldn’t help but enjoy my time with Headlander. Despite having a disappointing story and world by Double Fine standards, the game still has more charm and wit than most other titles on the market. The often needless backtracking, strange use of RPG mechanics, and unimpressive combat hold the game back from being truly remarkable, but the amazing puzzles and duality of gameplay should be enough to satisfy both Double Fine fans and fans of the adventure genre alike.