In preparing this write-up I realised just how difficult it is to adequately analyse such a short burst of exposure to such a long video game. There are some titles like, say, sports games that will pretty much show you exactly what to expect every time you play a match. A game like Darksiders 3 – one in which you’ll spend dozens of hours across differing landscapes, fighting different enemies and upgrading your weapons and abilities – is one in which any small snippet almost works against it, leaving you assuming more is to come but still completely unaware of its quality. It’s not like Leo Messi unlocks a new skill if you play with him for a whole season in FIFA 19 is it?

As it is, then, I’ve experienced a very small city street area of Darksiders 3, replete with a handful of basic enemies to be taken down with basic combat moves, and a boss fight in which I skipped all the cutscenes because a context-free cutscene might as well be spoken in Dothraki and subtitled in Wingdings for all the good it’ll do. I basically know that Darksiders, in its third iteration, is…still good. I think. 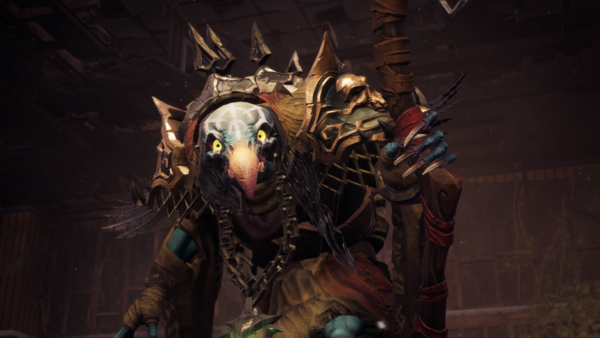 This is Envy. She is a crow. Crows steal things because they are envious. It’s symbolism.

Playing this time as Fury, the sister of previous protagonists War and Death, players will be able to make use of her mage powers to cast attack spells, traverse the environment and even change forms. I didn’t get to do any of that, of course, but that’s what the main game will allow. What I did get to do was walk through a wrecked city, spam the attack button to whip seven shades of satanic shit out some goblin blokes, swing around on a whip-like Simon Belmont, and beat up a crow…witch…thing.

The real beauty of the Darksiders series is its unabashed attempts to make a Zelda clone for bigger boys and girls. Darksiders 2 was one of the most underrated games of the last generation – one which had an exhaustive loot system, innovative power upgrades and gadgets, athletic and challenging world-traversal, and some truly spectacular boss battles. It is a franchise I’m delighted to see come back, but one I am still yet to accurately gauge in terms of its differentiation and overall quality after 15 minutes.

Fury as a character is definitely going to act differently to her brothers, and clearly has a lot more personality – even if it is basically just ‘Bayonetta with more angst and less innuendo.’ Assuming the demo was staged in the early stages of the game, her power levels were understandably low. Combat seemed limited to basic whip attacks, with no discernible option to use mage powers at this point. Ancillary powers were also pretty non-existent, with the Castlevania IV whip-swing pretty much the sum of them.

Aside from the jumping – most notably the double jump ability – everything in Darksiders 3 felt solid and responsive. Of course, jumping in a game like Darksiders 3 is a pretty important ability, but it just seemed a little off in the demo. Rather than providing an extra height boost, the second jump seemed to propel Fury forwards. I genuinely don’t remember a single jump I attempted that didn’t result in Fury having to grab the ledge and pull herself up, even if the ledge was shoulder height at best.

Thanks to the development of Darksiders 3 being handled by several members of the team that worked on the previous two entries, I expect so much more from the game when the full version is released. The snapshot I got was slightly disappointing, but largely because nobody plays an action-adventure RPG for the early stages. The future of the series was previously up in the air, and it’s now in the right hands to maintain its undoubted quality.