As a massive fan of From Software’s Soulsborne series, I have found myself adrift in catch-22s surrounding Hidetaka Miyazaki’s brain-children as of late. As much as I love the games – Bloodborne is in my top ten games of all time – I certainly wasn’t devastated to hear that Dark Souls 3 was likely the last Souls game that From will produce. I subsequently had mixed emotions when E3 revealed that Shadows Die Twice was, as most expected, NOT Bloodborne 2.

On the one hand, it was great that the developer was creating something fresh, and just a little disappointing that we really were leaving the world and style of Yharnam behind. Luckily, Sekiro is such a brilliant mishmash of old and familiar, that any disappointment has been well and truly crushed under the game’s immediately tangible vindication for not being another sequel. 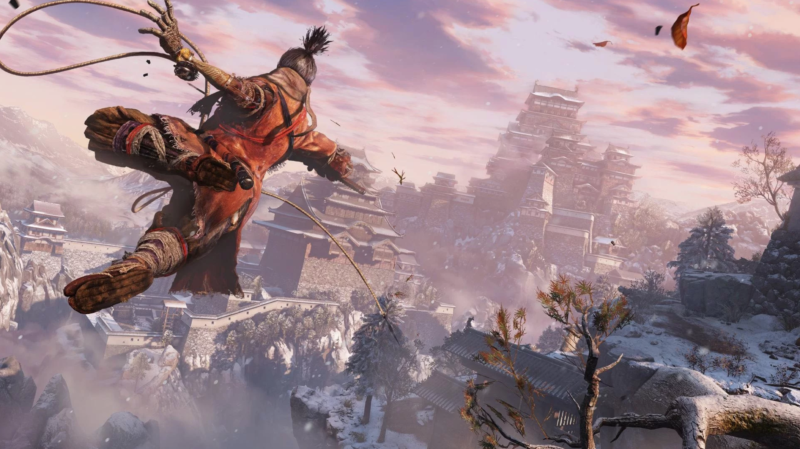 A flying start to the demo

The Gamescom demo starts off with your character stood high in a tree (I actually died trying to jump off it) tasked with jumping down before grappling onto a nearby rooftop, and at this stage, it’s natural to feel like From have strayed quite dramatically from their beaten path. As soon as you start taking on enemies in combat, however, you’ll feel right at home – difficulty and all.

The feel of Sekiro in action amounts to something of a Souls greatest hits. With the speed and maneuverability of Bloodborne (dialed up another notch) crossed with the methodical and tactical combat of Dark Souls, this promises to be a supremely refined action game. A decade of experience has culminated in brutal, fluid, exhilarating gameplay on a level that strikes enough of a balance between the familiar and the neoteric to satisfy fans of Dark Souls, Bloodborne, both, or neither.

Of course, from a brief demo, one can’t tell the full extent of new content we’ll be treated to with the full game, but it’s clear that Sekiro will have a much greater focus on stealth than its predecessors. For one, this game actually has a crouch/sneak button. No more walking slowly while fully erect (not in that way) for us. Any stealth kills are rewarded with a gloriously violent fountain of crimson, and it now appears to be more contextual than in previous games. Yeah, I’m giving points for accurate projection of blood spurts.

This bloodshed will come at the behest, or should that be behead, of Sekiro’s enemy types, of which the demo has a fair amount. There are shield-carrying maniacs, samurai of both the general and the General kind, bow-toting bastards, and the classic giant, erratic monstrosity – now capable of a variety of wrestling moves such as dropkicks, the People’s Elbow and even some Ric Flair cowering and flinching when you’re raining down sword swipes on his sorry, oversized ass. 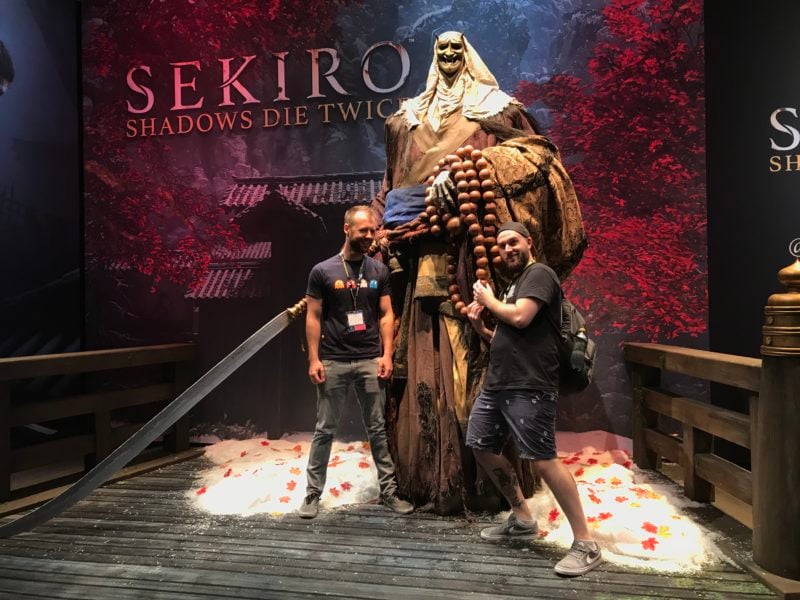 Luckily we didn’t face this dude in the demo, just in real life

It’s not just swords that will be in your arsenal in Sekiro either. The playable ninja’s wacky, waving transformable arm will offer up a whole host of secondary weapon and magic opportunities. The demo provided a look at a flame-spraying attack and giant axe that can be used to both break through shields and heap pressure on an enemy’s stun gauge, leaving them open to a stylistic and devastating finishing move.

I’ve only played ten minutes of Sekiro: Shadows Die Twice, but it’s a runaway contender for best game at Gamescom. If you can’t get enough Soulsborne, but you’ve had enough of Souls and Bloodborne – hell, even if you haven’t – Sekiro simply can’t disappoint. There’s nothing to fear about From Software’s new IP (other than its brutal difficulty); it will deliver that inimitable Souls feel in spades, and further shows how effortlessly this developer is able to transpose its signature staples to wherever it pleases without ever missing a beat.