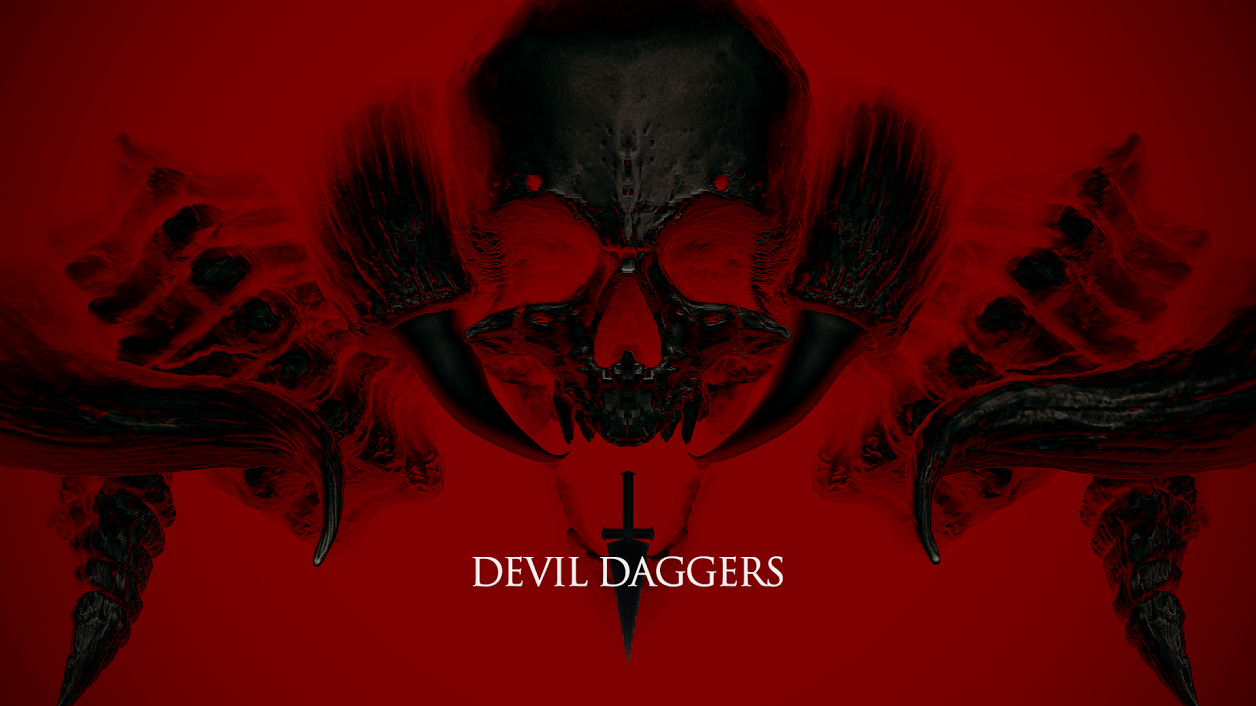 The indie game genre is notorious for housing a plethora of games that fly under the average consumer’s radar.  Whether it’s due to a lack of marketing or an untimely release, many exciting experiences are left undiscovered by a potential fan.  Such is the case for Devil Daggers, a highly addictive indie shooter released in February of 2016.  While the game did receive vast amounts of praise from both critics and consumers alike, it’s still relatively unknown to many, and deserves to be put in the spotlight.

What makes Sorath’s Devil Daggers so addictive is the simplistic nature of its gameplay.  The experience as a whole is based around simple movement mechanics and ranged-based combat, but the two components are designed so well that anyone playing the game will find it easy to learn, but tough to master.  What’s more, the bare bones, almost basic nature of the game leaves little to the imagination, but offers players a difficult yet rewarding experience to keep coming back to.

Devil Daggers is a first person arena shooter for PC and Mac.  The player controls an unnamed character only represented by a hand that juts out from the screen.  There is no story, no weapons to choose from or armor to pick up, and no explanation as to what exactly you’re trying to achieve.  The only goal in the game is to survive the never ending horde of disembodied skulls and nightmarish creatures that invade the small stone platform the player stands upon.  To combat these demons, the player has to shoot fiery daggers from his fingers in either a continuous stream or short, shotgun-esque blasts.  The beauty of Devil Daggers is how well it revels in its difficulty.  The game never explains to you what you’re supposed to do, and only through constant death and revival will the player learn new tricks and patterns to follow.

The art style and gameplay of Devil Daggers is very reminiscent of 90’s FPS classics like DOOM or Quake.  Pixelated graphics and minimalistic sound design mask the gory deaths of thousands of enemies ranging from skulls to floating tentacle demons and a skeletal centipede.  The movement speed almost feels as if it was amped up to 11 as the player frantically darts from one safe point to the next, trying to keep the numerous enemies from touching them.  As the game progresses the difficulty naturally increases.  Enemies begin to assault the player with more speed and desperation, while new spawn patterns force the player to constantly rethink their strategies.

Death comes quick and often as any form of contact with the enemy A.I. kills the player.  Enemies move in sporadic patterns and easily dodge the player’s maelstrom of daggers.  Larger enemies are easier to hit, but take more damage before falling and can sometimes attack the player by spewing out smaller demons.  The smaller demons will congeal into swarms of carnage as they make quick work of an unobservant player.  However, this allows for instant replayability as one can jump right into their next attempt at a higher score just after death.  The game wants the player to fail so that they can learn from their mistakes and gain a higher score on their next run.  What’s more, tougher enemies like those that spawn smaller demons or ones with ram-like horns will release ruby red crystals upon death that the player can pick up.  Once ten are acquired, the player’s attack power is increased, allowing for a prolonged life during that run.

The game’s online component is what brings players back at a constant rate.  While trying to beat one’s own score can be enjoyable, being able to compare a player’s longest time with others across the globe adds a fierce sense of competition to this simplistic game.  What’s more, players can watch the longest runs of other players to learn new strategies and compare gameplay styles.  Priced at only five dollars on Steam, Devil Daggers gives players their money’s worth of enjoyment and value, if not more.  The engine and sound system are completely original, and the void left by an absent soundtrack (during gameplay) is instead replaced with the beautifully morbid sounds made by the various demons.  Furthermore, Sorath recently updated the game with two new enemies, vsync options, new HRTF sound processing, and a refreshed leaderboard.

[Ed note—The new leaderboard reflects a new progression brought about by the new enemies, though the old progression and leaderboard can still be accessed via a beta branch on Steam.] 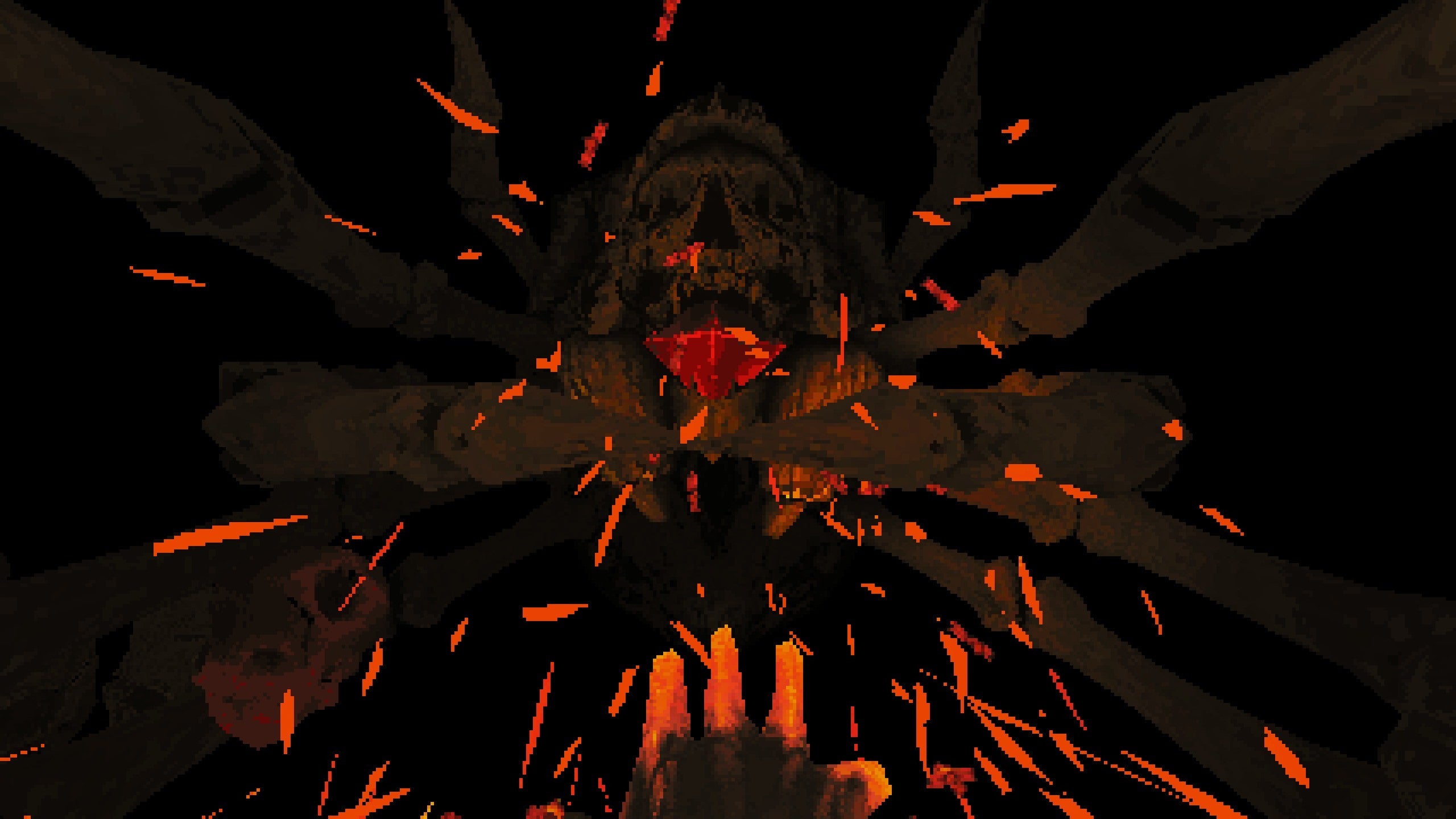 Devil Daggers is everything it’s expected to be and more, offering players an engaging, tough, and highly addictive experience.  This, coupled with unique graphics and a simple premise, creates a game that puts style over substance, but does so in the most wonderful way.  While at first glance the game may seem a little threadbare due to it only having one arena, it scratches a very specific itch that most FPS and indie fans will know well.  For a team as small and young as Sorath is, they have created something truly unique and memorable.  Hell has never been as engrossing and fun as it is in Devil Daggers.

Want us to cover another forgotten indie title?  Let us know in the comments, and check back here at GoombaStomp.com for even more video game news, reviews, and features.