There’s a particularly telling moment toward the end of Final Fantasy VIII that really lets you know what kind of finale you’re in for. After a climactic space battle with the sorceress, Adel, players are blasted through time, 1000 years into the future, to face their true foe. When they arrive they find the last members of a dead army, their dead army, still valiantly committed to fighting the war against evil. Unfortunately, they have failed. As the party traverses a desolate landscape, littered with their dead comrades, a mournfully operatic tune evokes a sense of menace to this already horrific future. Finally the player crosses a giant chain, one of many, that holds Ultimecia’s Gothic castle aloft in the sky.

Grim, dark and foreboding, this wordless introduction to the final dungeon, and it’s villainous denizens, reminds the player of the stakes involved in this final battle, and why they must prevail. The fact that the party must defeat no less than 8 monstrous bosses within Ultimecia’s fortress in order to even have their basic fighting and gameplay functions back (including the ability to save your game), only further cements the power of their nearly omniscient foe.

When Squall and co. finally do reach the summit of this unearthly place, they are asked one more time if they wish to proceed. As soon as the player answers yes, the door opens and a tune more haunting and discouraging than any heard throughout the rest of their journey begins blasting immediately. You see your six protagonists standing in a throne room, with a deadly but relaxed foe sitting high up on a throne. She hasn’t even condescended to stand up from her seat for you. Ultimecia’s obvious confidence and power, a power that has already reached across generations of time, are ready to dwarf you even before the battle begins. 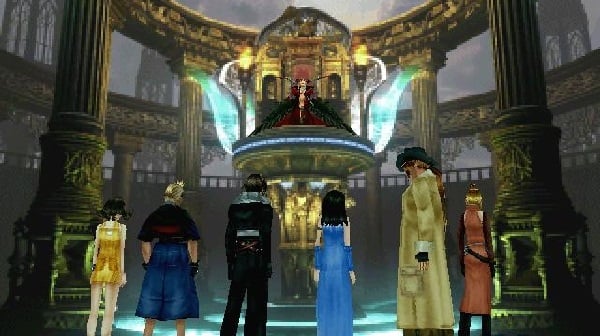 When it does begin, the music ramps up at last. In fact there are three different compositions that play out over the course of this battle, the first, epic and intimidating, the second, devastating and daunting, and the third, curious and sad, with a gradually rolling crescendo that seals it as the end, one way or another.

Your first foe is Ultimecia, in her simple human form. Beginning with a randomized selection of your party members, the battle throws you off balance right from the start, and if you are unlucky enough or unwary enough to lose a party member, their essence will be obliterated and scattered into the dusts of time forever (gulp!). When this form is overtaken, Ultimecia summons her own GF (Guardian Force) and sets it upon you. With GFs as a central plot point, and one of the key methods of victory throughout the game, the threat that one of your enemies can now use a GF, one you’ve never even seen no less, is incredibly intimidating.

Griever appears as a cross between a vicious lion and a demonic gargoyle and demonstrates his power with some shockingly devastating attacks. Should you persevere at this point, the dynamic of the battle shifts yet again, with Ultimecia combining forces with Griever, and morphing into a hideous creature that is half-woman and half-beast. Once you fell this unholy creation, though, after some cinematic effects, and a final boss seemingly at the absolute apex of her power, the battle briefly appears to be over. Ultimecia/Griever explodes into dust, and sparkling rain seeps from the dark clouds above as her essence fades away in slow motion. 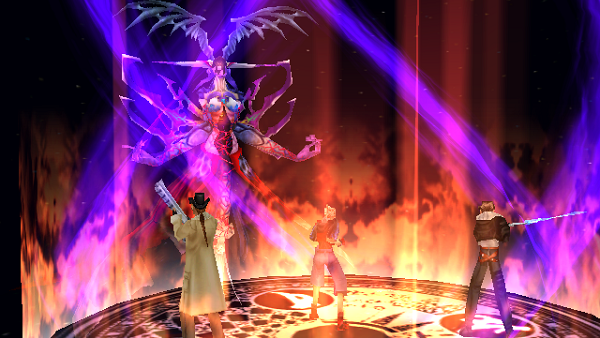 This is not the end. The final form of your foe rises into the treacherous expanse of space and time itself, and she takes you with her. Here you see the beginnings of Ultimecia’s new universe taking shape, culminating in the form of a faceless and inhuman goddess that is now the vessel for the sorceress herself. Her voice changes from shock, anger, and, sorrow, into a relaxed and careless tone, as if even her own disposition is beyond her now.

As the remainder of the party uses the last, best attacks and spells they have, Ultimecia literally blows away entire skills from your repertoire, when she’s not decimating you relentlessly. Her screen-filling, camera-shifting attacks are crushing for your party but should you emerge from your endless encounter with this most deadly enemy, you will be treated to an ending that is well worth the price of admission.

In the hall of fame of Final Fantasy end-bosses, Ultimecia shares company with some of the most memorable and long-lasting characters in the series history. From the deliriously psychotic Kefka, to the insidiously sinister Sephiroth, many Final Fantasy finales still live on to this day as some of the best in gaming’s 50 year history. Yet, chief among this rogue’s gallery of daunting and terrible specters, stands a woman, the only real female nemesis in the series history, and the crowned queen of Final Fantasy boss battles.