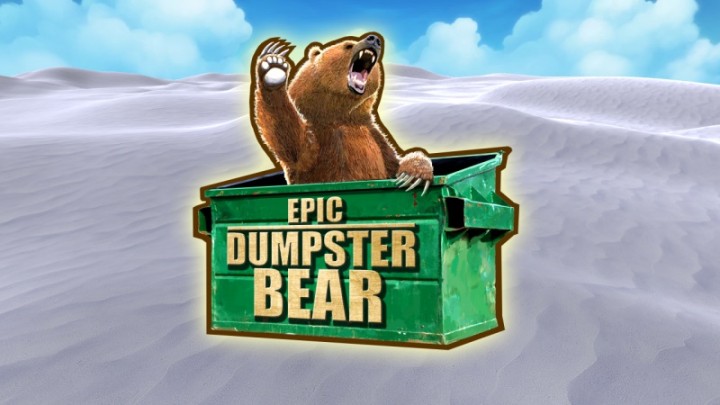 Epic: ‘Noting or pertaining to a long poetic composition, usually centred upon a hero, in which a series of great achievements or events is narrated in elevated style.’ In their quest for epic-ness Log Games’ 2D platformer falls drastically short of the mark, instead delivering a title devoid of any real imagination, creativity, and an overall incentive to see the game through to the end. Epic Dumpster Bear is a lazy and uninspired addition to a classic genre that has, otherwise, portrayed fantastical worlds with empathetic characters and memorable antagonists. Mega Man saw the player overcome a series of treacherous obstacles to defeat the nefarious Dr. Wiley, Mario must rescue the Princess from Bowser (or King Koopa if you’d prefer), Simon Belmont must put an end to the curse of Dracula – once these tasks are fulfilled the game is complete. Aside from the brief mentions of the cryptic evil corporation, Epic Dumpster Bear lacks purpose and direction as it continuously begs the question “Why am I playing this?”

This would usually be the section in which the premise and the story are explained, but due to the fact that there’s barely any context – the cutscenes are barely cutscenes at all, they’re just static character models accompanied by semi-expositional text – there just isn’t a lot to say. The overall presentation and graphical style lend themselves to a bare-bones flash game; It’s simple graphical assets and its short duration would be better suited towards the handheld market. The game follows a bear as he seeks revenge on the ambiguous corporation – not a human in sight – for destroying his forest… and that’s about it. It’s up to the player to collect the coins scattered around the level while also looking out for the three hidden red coins – once the level is complete the player is rewarded for their efforts with a salmon that has no lasting (contextual) effect on the rest of the game. The recurring theme of pointlessness hangs around Epic dumpster Bear like a bad smell, but this wouldn’t’ve been an issue had Log Games decided to implement a genuine premise as opposed to its misjudged ironic approach. Trekking through the flat levels only to see the same recycled backgrounds and enemies with different skins proves laborious as opposed to exhilarating – without any recorded dialogue and a limited range of animations, our eponymous hero possesses as much character as the owl whose sole purpose it is to occasionally fly up and down. While it might be considered unfair to call the core gameplay bad, it certainly doesn’t play its part in invigorating the celebrated genre; anybody who’s ever played a 2D platformer will know what to expect. It neither inspires nor innovates, and it’s these glaring omissions that prevent the dumpster bear from ever being a worthy contender alongside the Mario’s or the Mega Men of old.

As if Epic Dumpster Bear’s insistence on revelling in mediocrity wasn’t enough, the title is further bogged down by occasional obtuse controls and a complete void of any meaningful social features. Wall-jumping – which had been perfected in the NES era – is a mess and will play its part in many a broken controller. sometimes the bear will jump off the wall and sometimes he won’t as he plummets to the fiery pits of gaming hell – it’s infuriating, especially when one of the last levels has the bear ascend a vertical section with walls while trying to escape a rapidly rising fire. Imagine Rayman Legends classic vertical escape sections but without the precise controls, the sense of timing, and the overall rhythm: this is Epic Dumpster Bear. Social leaderboards form an integral role in the gaming zeitgeist, but they’re nowhere to be found here. For a game that actively encourages the player to zoom atop grind rails, and offers alternate routes in which to complete the level, it seems like a strange oversight not to include any form of time-limit – it could’ve proved advantageous as way in which to compliment the game’s ironically (and unintended) conservatist approach. The inclusion of bosses at the end of themed World’s usually consist of gargantuan versions of reskinned enemies from previous levels, or variations of dragons/goliaths. One such boss can be defeated by standing on a platform, unreachable to said boss, and throwing bombs until he keels over, there’s simplicity and then there’s laziness. For all its misgivings and failings Epic Dumpster Bear does truly deliver in the music department; Mike Pettry’s score is irrevocably epic with its undeniable nods toward classic 80’s action films, but unfortunately it doesn’t reflect the overall quality of the game it represents. As mentioned above the gameplay is by no means terrible, but the overbearing sense of repetition and the contrived nature in which the Bear finds himself in a (not so) new and mind-numbingly dull area only reinforce the games absence of identity and purpose. Every collectible in Mario had its principle, every level would bring Mario one step closer to the ultimate goal: the safe return of Princess Peach – so why is a bear – whose sole purpose is to wreak havoc on the corporation that destroyed his forest – jumping onto bull’s-eye targets at the end of levels and collecting salmon? To it’s credit the secret levels unlocked by spending coins do add variety by incorporating touch controls, but even these quickly become boring through lack of challenge. Players don’t need complex Oscar-worthy stories in their videogames, they need a reason to continue the quest at hand. In a genre already oozing quality, players want a game that distinguishes itself from the competition – Epic Dumpster Bear is neither facetious, nor is it obnoxious, it just is, and that’s the problem.

Epic you say? Best leave this bear to hibernate.