2015’s Destiny expansion, The Taken King, is a tough act to follow.  Adding a 7+ hour campaign, new cooperative strike missions, new player versus player game modes, a new raid with a new Challenge mode, a new patrol area with tons of hidden secrets, as well as new weapons, gear, subclasses, and in game systems to keep the overall experience feeling fresh, The Taken King is a perfect example of high-quality downloadable content. Where The Taken King brought a lot of new stuff to the table, Destiny’s newest expansion, titled Rise of Iron, spends most if its time ironing out a lot of the aforementioned content, making for a smooth gameplay experience with some additional experiences to keep it all engaging.  All said and done however, Rise of Iron isn’t as royal an addition as what came immediately before it. 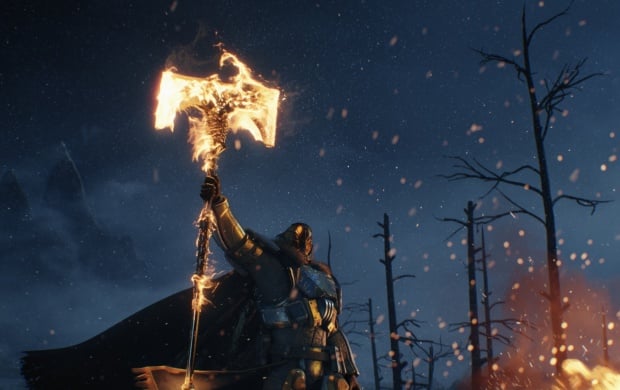 Rise of Iron opens with a cinematic that sets the stage and paints the familiar face of the non-playable character, Lord Saladin, as a sympathetic hero who lost everything to a bio-mechanical virus entity known as SIVA.  The previously enigmatic figures known as the Iron Lords are revealed to be the true predecessors to the Guardians, the group of light-endued heroes the player has been a part of for the last two years.  The Iron Lords were all  but wiped out fighting SIVA, halting the spread of SIVA with their sacrifice until an old foe finds the virus sealed deep within the Earth.  Now, it’s up to the Guardians to pick up the mantle of the Iron Lords, halt the spread of SIVA infecting Earth in Old Russia, and put an end to the Fallen forces fusing themselves with SIVA to make mechanized monsters of themselves. 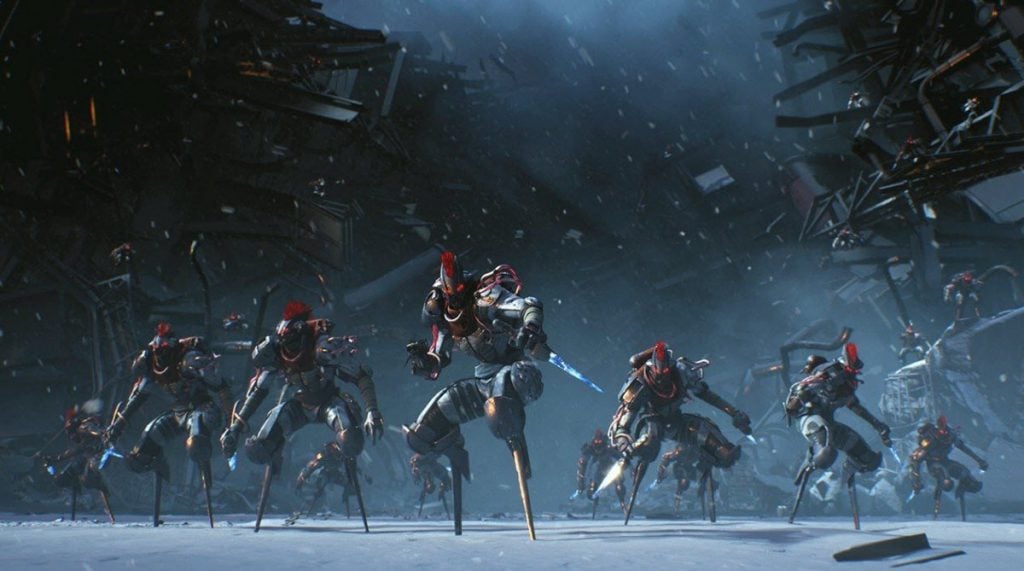 That may sound like the makings of an engaging tale, however beyond its initial handful of cinematics Rise of Iron, in many ways, reverts back to the form of storytelling Destiny utilized before TTK: basic exposition dumps when heading in and out of missions which attempt to explain why the mission at hand is so vital to the cause.  Gone is the thrilling, adventurous, quick-paced tone presented in The Taken King.  Instead, later cutscenes in Rise of Iron, certainly appearing in larger numbers than all of Destiny year one combined, might as well be describing a chess board, boiling down to movements across a board and recounting the necessity of capturing particular pieces.  The figure that would represent the enemy king, Aksis, is an ambiguous figure, not even name dropped in the short campaign, and players will remain apathetic toward him as a result.

On the player’s side of the board, the pieces aren’t much better.  Saladin, who begins as a sympathetic character, is underutilized, uninteresting, and a poor substitute for Cayde-6, voiced by Nathan Fillion, the character who’s role was to move the narrative forward in TTK.  Shiro-4, assistant to Saladin, who provides many of the voiceovers in game, is equally bland for the most part, but all too often his line delivery goes from disinterested to over-zealous making for some awkward, action-movie lines that will stick with players much like those of Dinklebot from Destiny year one.  The only true stand out is Nolan North as the player’s “Ghost,” a little robot companion, who gives a lot context, pokes fun at the plot, and provides a lot of comic relief with far more success than ever before.  The expansion’s campaign, or, continuing the metaphor, chess game, isn’t too long, and is over before players will truly feel invested in the conflict.  While the two-hour story is perhaps told better than Destiny year one’s narrative, and is far, far from all there is to do in RoI, it certainly left me with an unsatisfied hunger for more. 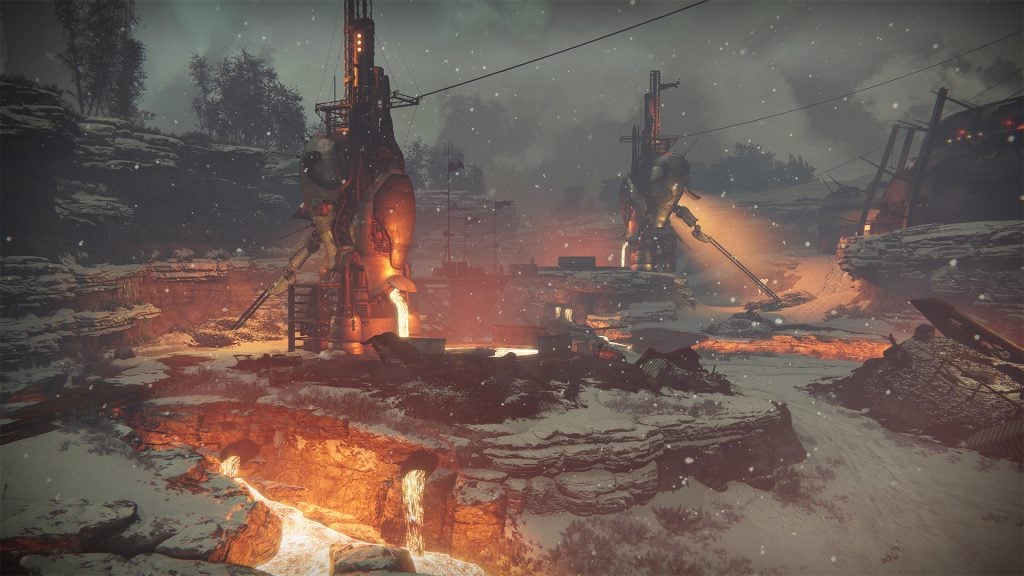 What RoI provides on par with previous expansions is setting and atmosphere.  The new patrol area, the Plaguelands, brilliantly blends the familiar aesthetic of the Cosmodrome with the all new snow laden and SIVA-filled settings only found in RoI. While the Plaguelands expands off of a previously visitable area, the recycled settings feel brand new with their snowy blanket, new enemies, and slight alterations, including the presence of SIVA that appears in the form of red tendrils invading the abandoned industrial atmosphere.  The all new sections of the map combine equally as well if not better the rusted and forlorn appearance of Old Russia with the revitalized forges of the Fallen and the virus-ridden landscape like veins across old limbs.  Through each new story mission, strike, and continuing into the raid, the environments truly shine and beg to be explored, a sensation that, for the most part, is well rewarded.

Unfortunately, the true antagonist of Rise of Iron isn’t SIVA, but the all too familiar grind of Destiny.  The campaign and new missions will help players reach previously unattainable heights in terms of their light-level, but from there players will be dependent on Strikes (Destiny‘s longer cooperative missions which conclude with memorable boss encounters) for regular rewards.  Luckily, RoI provides an all new and well designed Strike on top of two redesigned Strikes to keep players engaged.  The Weekly Heroic Strike Playlist has also been revamped, adding modifiers to the mix not unlike those applied to the Nightfall Weekly Strike, providing additional hurdles and benefits for players to enjoy or overcome as they take on Strike after Strike.  Additionally, Strike bosses often drop new items known as Skeleton Keys, which allow players to open “Strike Hoards” at the end of a Strike which bestow coveted Strike specific gear which previously dropped randomly and infrequently.  All of that, however, will only get players so far (around light-level 365 or so), and feels a bit like an arbitrary grind to lengthen the expansion.  While the new arena mode in the Plaguelands, Archon’s Forge, can also grant rewards at 365 light for eliminating enough enemies in a limited amount of time, the rewards drop infrequently, the Forge requires other players to be present, and each character, oddly enough, can only carry one activation key for the timed challenge.  All of that and the loot’s level cap keeps the Forge from being too relevant later in the expansion.  From 365 on only the new raid, Nightfall rewards, Strike Hoards, faction level-ups, undependable Crucible drops, and the irregular Crucible variants (Iron Banner and Trials of Osiris) will help players reach the new level cap (385 soon to be 400) and levels necessary for the expansion’s “end game.”

Wrath of the Machine, RoI‘s new raid, is worth the tedious grind, however.  Not the shortest raid, but far from the longest, Wrath of the Machine interests itself less in meticulous mechanics and more in communication, deftly eliminating enemies, and precisely executing actions.  The new mechanics provided are fun and easily grasped, making it perhaps the most approachable raid yet, which is good for a game variant with low participation rates from the overall population of the game.  Continuing the game’s legacy, Wrath, like the raids before it, is the best part of the expansion, with adeptly designed settings and stage pieces, generous rewards, thrilling mechanics, delicious secrets, and engaging encounters including at least one that has distinguished itself as truly unique and unlike anything seen prior in Destiny.  While, subjectively speaking, the reward designs aren’t the best they’ve ever been, the aesthetic fits the theme and some of the perks are remarkable.  Beyond the barrier to entry, including the grind to light-levels reaching or exceeding 365 as well as the necessity of a six-man team, at least for most us, my fear is that a late, fairly steep difficulty spike may scare Kinderguardians and raid rookies away.  On top of that, the raid’s exclusive exotic weapon, a staple of Destiny raids, while excitingly hidden in a really cool way, asks a bit much of players to actually get the weapon and goes against developer Bungie’s new “play how you want” attitude. 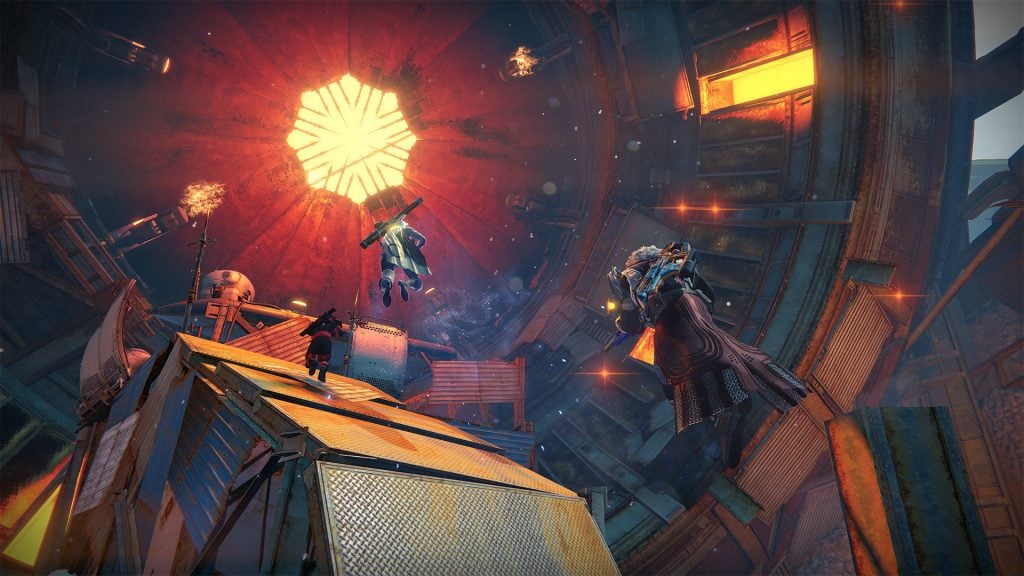 For those that are less interested in the PvE element of the game, Crucible, the PvP portion of the game, has seen several updates as well.  Most notably, RoI introduces a new game mode called Supremacy in which players only score points for collecting crests which drop off of vanquished guardians. The game then becomes a clever balance of collecting ally’s crests to deny points, enemy’s to gain points, and cooperation.  The mode also favors close-range classes and weapons in a game all too dominated by range right now, making Supremacy refreshing in more than one way.  There are also several new stages in which to play, adding always welcome variety to the mix.  Perhaps the most substantially reworked Crucible mode is the monthly Iron Banner event. Saladin, occupied by SIVA, has been replaced as the Iron Banner vendor by another surviving Iron Lord. Daily bounties for the mode have been replaced by four weekly bounties.  Completing one grants either a new piece of armor or a weapon that matches the player’s light level and isn’t limited to the pieces sold by the vendor.  On top of that, the mode drops loot far more frequently post game, turning it into perhaps the most rewarding event Rise of Iron has to offer.  Additionally, the buff increasing experience gradually throughout the event’s week long run has been removed and the overall effort necessary for a character to reach the mode’s highest rank has been diminished, while the buff granting additional characters extra experience after the first has reached rank five is still present.  Consequently, players can play when they want rather than being rewarded more experience for playing later in the week and completing the event with every character has never been easier. 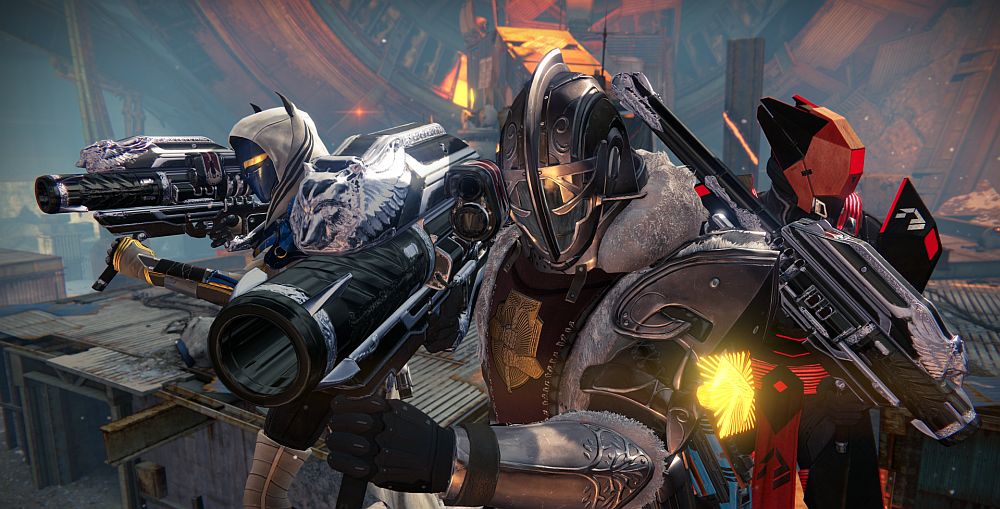 While providing some great new content, like a new patrol area, raid, record book, and social space, Rise of Iron in many ways, for better or for worse, simply feels like more Destiny.  The expansion does iron out some of the wrinkles left after year two, while also reverting to old habits including an over reliance on the grind and shoddy story telling. However, as the game enters its third year, a new unfamiliar element is also introduced in Rise of Iron with great success: nostalgia. In many ways strange for a game so young, with consideration to time spent in this world, the nostalgia is completely earned.  Great new exotic weapons are welcome additions to the player’s arsenal, but not nearly so welcome as missed old friends that here see their return.  The expansion having players return to the place where their Destiny journey first began is a welcome treat, one which many players won’t realize they wanted, certainly over unseen content.  The highest points in the expansion might not be the enticing new content, but when the player is given an old tool and told to wreak havoc with it or told to vanquish a familiar foe once more.  While perhaps not adding as much as returning players may want, Destiny: Rise of Iron provides a trip down memory lane that hopefully doesn’t end here, and certainly features Destiny at its best to date.