Destiny 2: Shadowkeep may be a return to a familiar destination, the Moon, but Bungie continues the trend of reworking Destiny with each new expansion, and Shadowkeep is no exception. Replete with a reworked season pass system, progression systems, customization options, sandbox re-tuning and quest interface, Shadowkeep is both a welcome iteration and extension of the existing Destiny 2 experience offering more RPG-esque player agency than Destiny has ever seen before. While the game is still haunted by some overly familiar issues, Shadowkeep is a welcome expansion and a promising start to the third year of Destiny 2.

The Moon isn’t the only familiar face in Shadowkeep. Keeping with tradition, Eris Morn has returned from a long absence for another dark, lunar expansion (the first being D1′s The Dark Below when the character was first introduced) as she investigates a disturbance deep within the Moon. Quite literally haunted by the past, Eris has called upon the Guardians to assist her in finding the source of the phantoms plaguing the Moon and vanquishing “Nightmare” versions of familiar visages from the past. 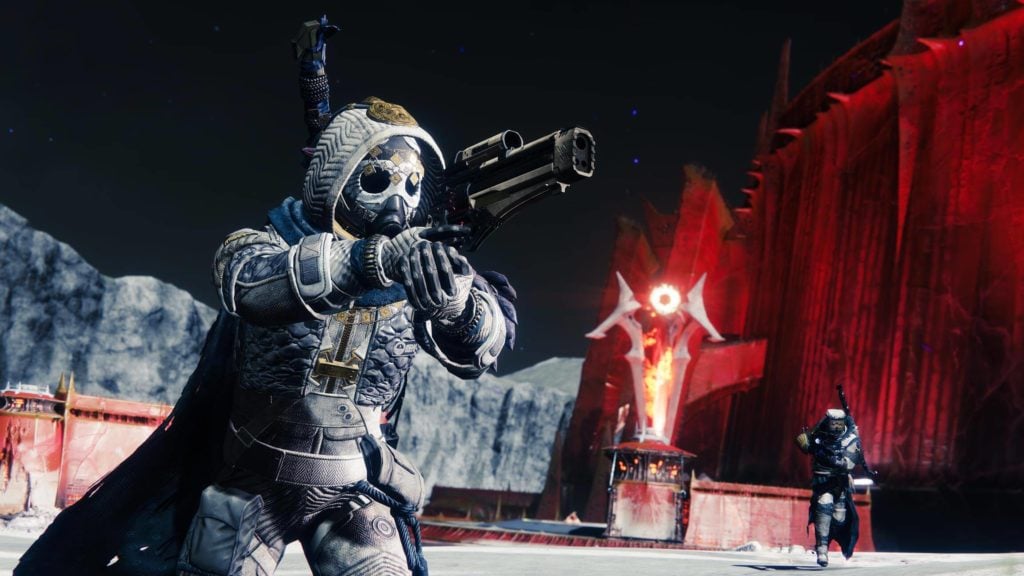 All is not entirely as old players might remember. An immense hive structure, the Scarlet Keep, now overshadows previously unexplored territory on the Lunar surface. New Lost Sectors hide in the depths of the Moon, and new secrets a la the Dreadnaught or the Dreaming City lie waiting to be discovered by inquisitive players. And at the very center of the expansion an ancient, unknown threat lies in wait, an ominous foreshadowing of the trials ahead.

While the expansion does a decent job ensuring the familiar haunts don’t feel overly recycled, it’s hard to say Shadowkeep makes the most of the Moon. The campaign opens on such a high note as players storm the moon in an unexpectedly matchmade sequence before individual Fireteams independently uncover an unanticipated twist that absolutely shatters expectation. Unfortunately, the narrative quickly devolves into uninteresting fetch quests that fail to live up to the intrigue of the initial mission nor live up to the narrative heights of some of the most memorable missions the Moon previously housed including fan favorites The Sword of Crota and Lost to Light to name a few. That’s tough company to keep, and Shadowkeep fails to measure up. 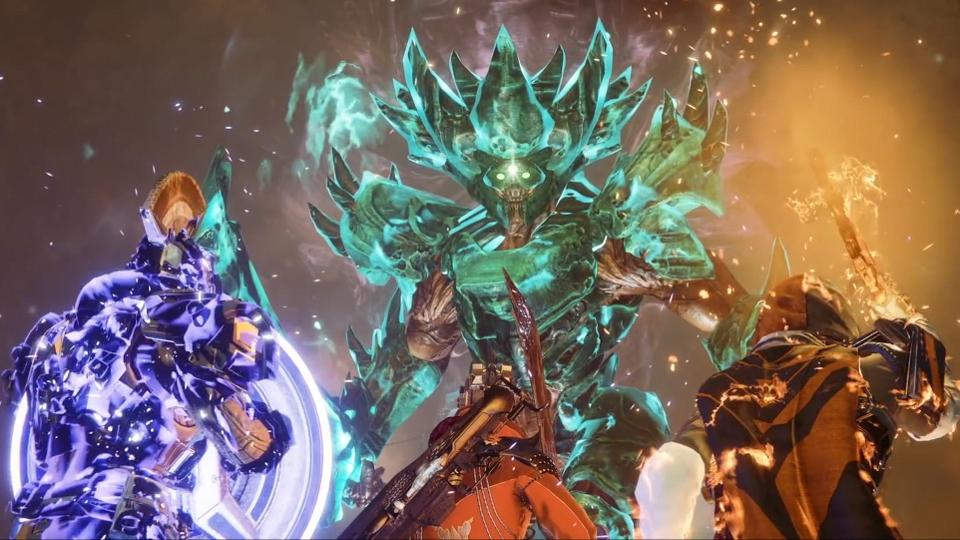 Similarly, a bit of that intrigue is reintroduced in Shadowkeep‘s final mission, but, like the campaign as a whole, it’s over before the player knows it and fails to live up to the precedent set by previous, lengthier campaign conclusions. More mileage is gotten out of the narrative and destination in the post-game in the way of a new weapon farming system, a new activity known as Nightmare hunts that play like mini Strikes, and a Strike proper, but that does little to alleviate the disappointment of an overly terse campaign that reads like a teaser for what’s to come over a distinct, fleshed-out story.

A New Era, a New Season

Part of that is presumably courtesy of a shift in Bungie’s approach to content releases. While the previous expansion, Forsaken, similarly opted for procedurally released content over the course of the season, Bungie has doubled down on that strategy with Shadowkeep ensuring there’s something new to be experienced each week that players sign in. While certain activities have alway arrived post-launch including raids, dungeons, and exotic weapon pursuits, Shadowkeep and its “Season of the Undying” has seen new PvE and PvP activities launched after the expansion’s initial drop, adding to an already lengthy list of Destiny to-dos.

Central to the season is the new PvE, matchmade activity, the Vex Offensive, which pits six players against waves of Vex combatants paired and features some minor puzzle elements, all for the sake of earning a series of weapons exclusive to the mode. While the Black Garden locale of the mode is certainly eye-catching, the Offensive, with its recycled mechanics and familiar enemies, doesn’t leave much of an impression beyond that. It might pale in comparison to activities introduced in past seasons (like Warmind‘s Escalation Protocol, or last season’s Menagerie), but is intentionally terse, intended to match this new seasonal philosophy, and will be removed from the game after Season of the Undying (though the exclusive arsenal will still be available in the loot pool obtainable through undisclosed means). Like the Vex themselves, the Vex Offensive might not seem like much independently, but collectively is a piece of a greater whole challenging and rewarding players for participating within the specific season.

Bungie is further defining each season with the inclusion of a seasonal artifact and a season pass system. The artifact, again only available for the season, offers players an avenue for additional, limitless Power gains while also offering unlockable gameplay mods encouraging players to utilize specific classes and builds. The Oppressive Darkness mod, for example, debuffs enemies hit by void grenades, encouraging players to construct discipline-oriented, void builds. Another mod, Thunder Coil, increases the power of arc melee attacks by fifty percent, giving all new life to the Hunter’s Arcstrider subclass. Meanwhile, the season pass operates similar to that of Fortnite or any number of games and replaces the previous cosmetic only level up system of Destiny 2‘s past. From the season’s outset, any and all experience goes toward unlocking rewards from the pass including new armor, armor ornaments, exclusive weapons and exotics, and engrams. The experience requirement for each level is static, meaning progress is fair and steady throughout and never feels throttled. Both seasonal systems are fantastic new additions that reward players for playing the game while making experience gains more purposeful than any other time in Destiny‘s endgame.

Shadowkeep also marks the debut of Armor 2.0, a new system that allows players more agency in character customization than ever before. Whereas armor previously rolled with random perks and a roll of only three stats (Mobility, Recovery, and Resilience), Armor 2.0 comes with no perks and six stats as Destiny 1‘s Intellect, Discipline, and Strength (determining the charge rates of player’s super, grenade, and melee abilities) make their triumphant return. Instead, Armor 2.0 has slots for modifiers so players can pick and choose whatever perks they want just as long as they’ve unlocked those mods. Mods are acquired from most activities, while enhanced mods (better versions of certain traditional mods) are exclusive to some of the game’s more challenging content. While the grind for mods seems excessive in the face of the rest of the game’s grind, it’s a one-time affair, some of the best mods are unlocked via the seasonal artifact, and the payoff is astounding, providing customization like never before.

Convoluting the process, unfortunately, is a messy elemental affinity system where certain mods can only be slotted into armor of a matching elemental type. Mods relating to pulse rifles, for example, are exclusive to Arc armor, so a piece perfectly rolled to a pulse-rifle-inclined player’s preference with a solar affinity won’t do them any good if they were hoping for pulse rifle perks. It was undoubtedly an intentional design decision to generate an arbitrary grind since players won’t need to chase armor with perfect perks any longer but is ultimately a mar on the face of an otherwise pretty great new system.

Convoluting the process, unfortunately, is a messy elemental affinity system where certain mods can only be slotted into armor of a matching elemental type. Mods relating to pulse rifles, for example, are exclusive to Arc armor, so a piece perfectly rolled to a pulse-rifle-inclined player’s preference with a solar affinity won’t do them any good if they were hoping for pulse rifle perks. It was undoubtedly an intentional design decision to generate an arbitrary grind since players won’t need to chase armor with perfect perks any longer but is ultimately a mar on the face of an otherwise pretty great new system.

Speaking to the grind, Destiny has often struggled and failed to find the perfect balance of meaningful power climb and tedious grinds recycling the same old activities. Luckily, at the outset of the climb towards max power, Shadowkeep strikes a much better balance centered on beloved ritual and new and or seasonal activities. Power drops now operate on a clearly labeled, tiered system, incentivizing players to prioritize new or challenging activities for maximum gains. Ritual activities (Strikes, Crucible, and Gambit), though tier one, retain their relevance by offering multiple weekly powerful drops for match completions, vendor bounties completed, and rank progression. Previous, otherwise irrelevant avenues towards power have been retired, but this is a welcome reduction and there is no shortage of powerful drops in the climb to max power. That isn’t to say that the grind couldn’t be shorter ensuring more players can participate in endgame activities when they first arrive, but progression generally feels smoother than any time in Destiny‘s past.

Conversely, content flow might overwhelm casual and even dedicated players as there’s simply too much to do and grind for players tight on time. Bungie now considers Destiny and MMO with proper RPG mechanics, and, in terms of time commitment, that really shows with Shadowkeep. On a certain week, a player might have an accomplished week in-game after sinking only three to five hours into the game. Other weeks the game seems to demand closer to the ten to twenty-hour range. One week, for example, saw the release of the new dungeon, a new Crucible game mode, an exotic quest, a new public event, and the start of the Festival of the Lost, a limited time, Halloween event. That’s simply too much, feels like poor pacing, and favors streamers, Destiny content creators, and hardcore players for whom Destiny is their exclusive hobby, a burgeoning theme with Season of the Undying. While it’s certainly exciting that there’s always something to do in D2, it doesn’t seem true to the game’s roots as a hybrid, a shooter with MMO elements, that could be taken at a more casual pace but still offered an engaging endgame for the dedicated audience. Now, there’s only an endgame with no end in sight.

That’s not necessarily a bad thing for players who want to pay a minimal price for seemingly unending content, and in that regard, Shadowkeep is a steal. A sensational new raid (minus some finicky new mechanics), a foreboding dungeon, an immense new arsenal to grind for, and a better tuned PvP and PvE sandbox in which to enjoy them mean Shadowkeep will keep Guardians’ attention the whole season long and is an excellent proof of concept for the seasonal structure going forward. If Bungie can keep this pace up, year three of Destiny 2 could easily be the best year in franchise history. As a general caution though, Destiny 2 now clearly caters to the hardcore, requires MMO levels of commitment, and is best enjoyed with a regular group; casual, time-restricted, and solo players beware. It might not be the best single expansion release in franchise history (that’s still a toss-up between The Taken King and Forsaken), but, beginning with Destiny 2: Shadowkeep, the third year of D2 is the closest the tumultuous title has ever come to Bungie’s ambitious vision for the shared-world shooter and the game fans have been waiting for these past five years.