Retro-style games certainly aren’t rare in the world of indie titles. Old-school pixel art has become commonplace in modern game development, with titles like Axiom Verge and Shovel Knight being a few of the standout games. But these titles aren’t considered exceptional because of their visuals; they’re magnificent because of their brilliant game design and strict attention to classic gaming conventions. Cursed Castilla continues this trend, with some of the best examples of level design and challenge that the retro-revival genre has to offer. 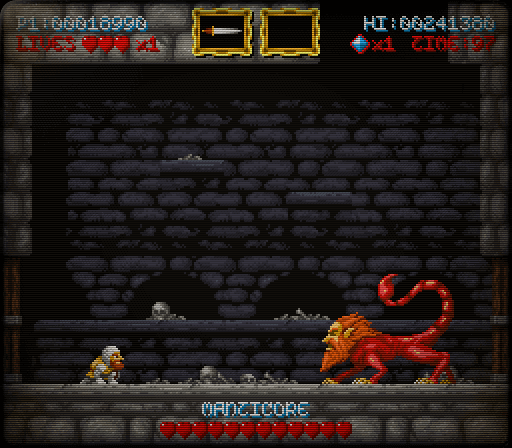 The Manticore may seem intimidating, but he’s actually fairly easy compared to some of Cursed Castilla’s later bosses.

Cursed Castilla is a 2D side-scroller that puts a heavy emphasis on platforming and timing. Think Ghosts and Goblins with a unique Spanish folklore theme. Locomalito and Gryzor87 absolutely nailed this aesthetic, as some of the boss fights are immediately recognizable to those who are familiar with popular figures in Spanish literature. All of the enemies blend well with their environments, and the over-synthesized music sounds like it would be at home in an arcade cabinet. It’s a presentation package that few retro-themed titles have been able to match, and it adds a lot of uniqueness to an over-saturated genre. The developers have also included a bestiary for all of the enemies and bosses in the game, which is a neat feature for those interested in the mythical creatures depicted in Cursed Castilla.

Many retro games are infamous for their difficulty, and Locomalito and Gryzor 87 have certainly taken this to heart with the game’s design. Cursed Castilla is not for everyone; the game becomes brutally difficult after stage two and steadily increases as the player progresses. Some of the later screens will require dozens of attempts from even the most seasoned platforming buffs, yet it’s never unfair. Every single section of the game can be cleared flawlessly—with enough skill, of course. There are no cheap deaths or unfair challenges. The game encourages mastering the controls and building skill rather than trial and error, which is a refreshing feeling. It feels amazing to constantly improve, and Cursed Castilla does an excellent job of rewarding players that are willing to put in the time to get better.

The difficulty level will undoubtedly make the first play-through much longer than it needs to be, but subsequent runs get shorter and shorter due to level memorization and practice with the controls. An in-game speedrun timer can be turned on for highly skilled players trying to beat their best times, which is a welcome addition that should really be included in more titles. Players willing to scour each of Cursed Castilla’s levels for five hidden collectibles will also be treated to an additional final boss that is even tougher than the normal one. This, along with completing the game using less than four continues, is required to see all of the game’s endings. Highly skilled players are rewarded with additional content, which is the best way to motivate gamers into getting better. 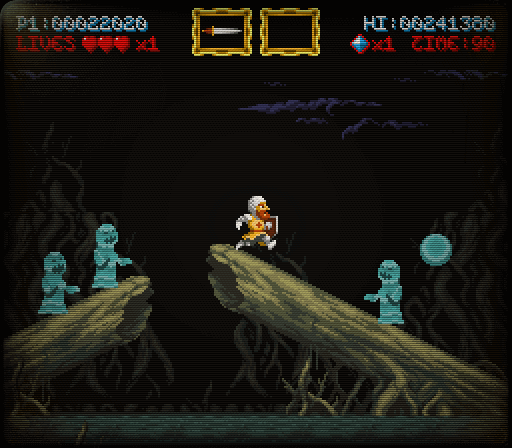 These goo monsters can spawn very quickly, but they only take one hit to kill

Many difficult games are only challenging because of the amount of time the player spends fighting the controls. Luckily, this is not the case with Cursed Castilla. The controls are fairly basic: one button jumps, another shoots the currently held weapon, and the control pad takes care of the single-speed movement. While this control scheme can easily be learned within a minute of play, it takes hours and hours to master. Taking the time to do so is made more enjoyable due to how fluid they are. There isn’t a single moment in which the gameplay feels clunky or frustrating. The momentum-building and jump physics all make sense, and before long, Cursed Castilla feels more like an extension of the player rather than an exercise in frustration. Comparing it to titles like Super Castlevania 4 or Ducktales in terms of control quality would not be inappropriate.

Cursed Castilla is a retro gamer’s dream come true. Every single aspect has been carefully crafted within the rules of classic game design. A brutal difficulty level combined with top-notch controls creates an experience that is challenging yet fair. While it’s certainly on the short side, it’s a game meant to be replayed in order to get the best final boss, times, and endings. Cursed Castilla is one of the greatest examples of a retro-revival done right and should be in the library of any classic gaming fan worth their salt.