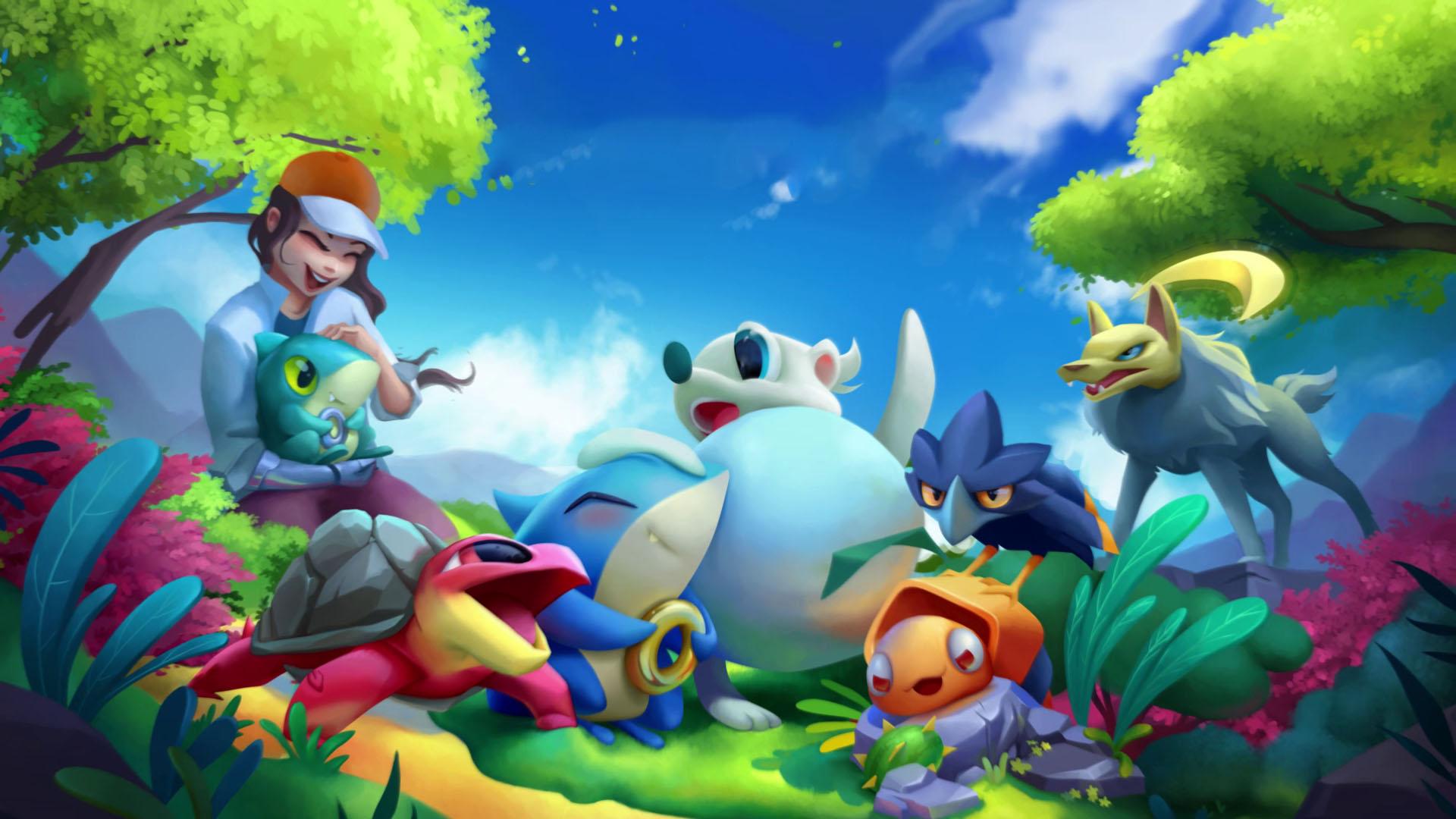 Since 1996, Pokémon has been a franchise whose success no other developer can replicate. The monster-catching phenomenon’s mainline games may stir up quite a bit of discourse nowadays due to some of Game Freak’s design decisions, but there is no denying that Pokémon’s earliest generations are timeless. In a year where more monster-tamers than ever before are trying to take a crack at the top spot, it is unsurprising that Coromon would shine amongst its competitors as it attempts to imitate the unbeatable champion by targeting its classic roots.

Rather than challenging Game Freak’s modern approach to the franchise, Coromon from indie developer TRAGsoft has been articulated like a love letter to the third and fourth generations of Pokémon. Coromon aims to further widen the depth of Pokémon’s more primitive gameplay style while taking its own distinct direction. Even in the face of some inherited mistakes Pokémon’s critically acclaimed Game Boy Advance and Nintendo DS entries made, Coromon is a great alternative for anyone searching for more worthwhile monster-taming role-playing games outside of Game Freak’s world.

It’s a Whole New World to See, With a Familiar Attitude

Exactly like Pokémon, Coromon takes place in a world where humans and creatures have learned to coexist alongside one another. As an up-and-coming Coromon Battle Researcher, the player character is sent out on a quest by their company Lux Soils to venture through the region of Velua and discover the essence of six powerful Titans scattered across the land. As to be expected by any game following similar beats to the classic Pokémon generations, the player will have to face off against an evil organization while collecting Coromon, conquering a string of select objectives, and training to become the very best.

Coromon’s formula is what you would expect after playing a Pokémon game that debuted prior to the franchise’s most recent experimental phase. The player will go from town to town following a linear story path, fill up a PC with Coromon, buy necessary battle materials like capture devices, and save cautiously to ensure you do not faint. Aside from battle mechanics that help keep Coromon distinct from its competitors, TRAGsoft made only safe and sweet altercations to its inspiration’s old formula–and that is not a bad thing. While a familiar coat of paint helps ease players into the world of Coromon, the battle system is able to unfold into something a tad more complicated than some of the first few Pokémon outings.

For the battle system, Coromon contains more traditional RPG elements than the Pokémon series. In Coromon, players not only have to watch over their health bar, but they also need to carefully analyze and calculate how many stamina points they use. Rather than having a limited number of usages per move, Coromon attack and defend under one shared stamina point meter. As small as the change may seem, it offers a completely different strategic playing field than what Pokémon has always helmed. Players have to account for when they need to recharge their stamina meter during battle and how moves using more points could potentially affect their survival.

Like the original Game Boy Pokémon titles, each Coromon is restricted to one of seven types. However, there are also six additional attack types that come with their own strengths and weaknesses. Coromon can learn moves from multiple types, but learning how the types and attack types affect one another is crucial to becoming a better trainer. Additionally, the game has made a reversion as Coromon does not have an EXP Share system in place. At first glance, it may seem like TRAGsoft sets itself up for a time-sink experience, but rest assured, the game requires just about the same amount of grinding as the original Pokémon games.

Aside from those changes, the larger differences between Coromon and Pokémon almost end there–and that might be for the better. The rest of the game’s replications and imitations are, once again, either welcoming changes from future entries, small tweaks to seemingly keep things different, or aspects that should have taken a few more notes from its inspiration.

When it comes to quality-of-life features, Coromon gets a lot right that Pokémon fans would instantly appreciate. For starters, there are multiple difficulty options that add various game-changing conditions for players of different skill levels. Right out the gate, the player has the option to play on a lower difficulty where party members can fully heal after each battle or a higher Nuzlock-esque intensity where Coromon will be permanently killed upon their defeat. The scaling is perfect and caters to Pokémon fans who are always looking for more malleable adventures that align with their preferences.

Likewise, Coromon’s developers clearly knew they were going to mess with players’ heads by changing up the known terminology of Pokémon’s type-chart while newcomers would struggle to quickly pick up on all the details. The player is given access to the type-chart at all times, whether they are in or out of battle. For such a small quality of life feature, it can instantly elevate the experience and stomp on the learning curve. Every RPG containing a type-chart should have this feature.

Where Coromon did not learn from its inspiration is in regards to monster storage organization and creating a story. Coromon should have just copied Pokémon’s menu design and the way in which the PC works. At first glance, Corromon’s user interface seems pretty in-depth. Upon closer inspection, though, these menus can be the game’s biggest weakness and are sometimes even in dire need of some more streamlining or options. Not only can regular menus be messy at times, but using the box system to arrange your squad and view monsters the player has captured can feel just as primitive as Pokémon Red and Blue.

While monster organization is a pain, ultimately, Coromon‘s major weakness comes from its flat story. While the imitations, replications, and changes to the Pokémon formula are all a delight for the most part, Coromon suffers from a slow-paced story that can feel more time-consuming than even Game Freak’s modern titles filled with slogs of dialogue. The opening moments of Coromon can feel simply glacial. Rather than how the Pokémon Game Boy and Game Boy Advance games quickly threw players into their first battle, Coromon takes its time to develop its world and protagonist.

While these elements seem like intriguing benefits for any RPG, Coromon’s plot does not have a huge payoff—in fact, the developers have shown interest in potentially tweaking the story in the future. For a game that relies on quite a bit of dialogue, it is disappointing to see how the story does not culminate into something greater. However, on the other hand, Coromon has a captivating world filled with great ideas. The idea of being a battle researcher who has access to advance technology in a world that blends fantasy and science fiction helps give Coromon a recognizable atmosphere.

The presentation is downright lovely. The visuals harken back to the Game Boy Advance’s chunky visuals while also taking quite a few notes from the late Pokémon games that were released on the Nintendo DS. In the overworld, there are plenty of moving characters and environmental effects going on, whether that be birds moving across the screen, thunderstorms causing harsh rain, or a light breeze of snow. Like Pokémon Black and White, Coromon’s battles have moving sprites that give each species just an ounce of more personality.

In terms of gameplay design, the only disappointing aspect of Coromon’s atmosphere can be the dungeons that stand in for the gyms. As mentioned before, rather than going around the region to earn eight gym badges, Coromon has players discovering the essence of six Titans within dungeons. While the concept is neat, the execution still is identical to that of the caves and gyms players breeze through. The only real difference from the gyms here is that the end boss is one souped-up Coromon. These unavoidable dungeons require players to go in prepared with a deep knowledge of their squad and a stash of items ready in the bag if they do not want to keep running in and out to the closest healing center, but they could have been fleshed out more and utilize other original opportunities to make them stand out.

You Don’t Have to Catch ‘Em All, But You Should Try

Coromon is a heartfelt tribute to one of gaming’s most impactful franchises. Even if it is not close to being a replacement or competitor for Pokémon, TRAGsoft’s monster-tamer does earn its place as a worthy RPG to play while waiting for Game Freak’s next entry in the series. Coromon is tailored for the old Pokémon audience that came before the days of Unova, and it succeeds in pleasing those players with its many promises. Even in the face of some technical shortcomings and unfulfilling plot progressions, there is a lovable RPG to be found here filled with plenty of memorable creatures you will look back on and fondly remember.

Sure, the opening hour of the game may drag on, and the story might fall flat, but catching creatures to fill an encyclopedia is still a blast and battles can get intense when the player takes their time to study up on the game’s type-chart and mechanics. For those looking to catch ’em all in a different world for a change, Coromon will fill your Pokémon-like game needs with more than enough monsters to collect and trainers to conquer. Even if you do not want to be the very best Coromon Battle Researcher, those interested still owe it to themselves to say they saved the Velua region before.