Japan is a land of many hobbies. Game stores, hobby shops, textile stores, and plenty of other specialty places for collectors and crafters are in most metropolitan shopping districts. Goomba Stomp is a site mostly dedicated to digital media, but it feels like a waste to not cover things like card games or hobbies in a Japan-focused column when they have such close ties to every other entertainment industry the country has. Anime franchises like Vanguard!! And Duel Masters were built on selling trading cards. Oversized arcade machines have their own collectible physical cards used to play online at various game centers across the country. Even Bandai got in on the anime advertising hype with a line of Gundam series specifically aimed at pushing their plastic model kits.­ This time we’ll be covering trading card games, my personal favorite of all the physical hobbies Japan has to offer. 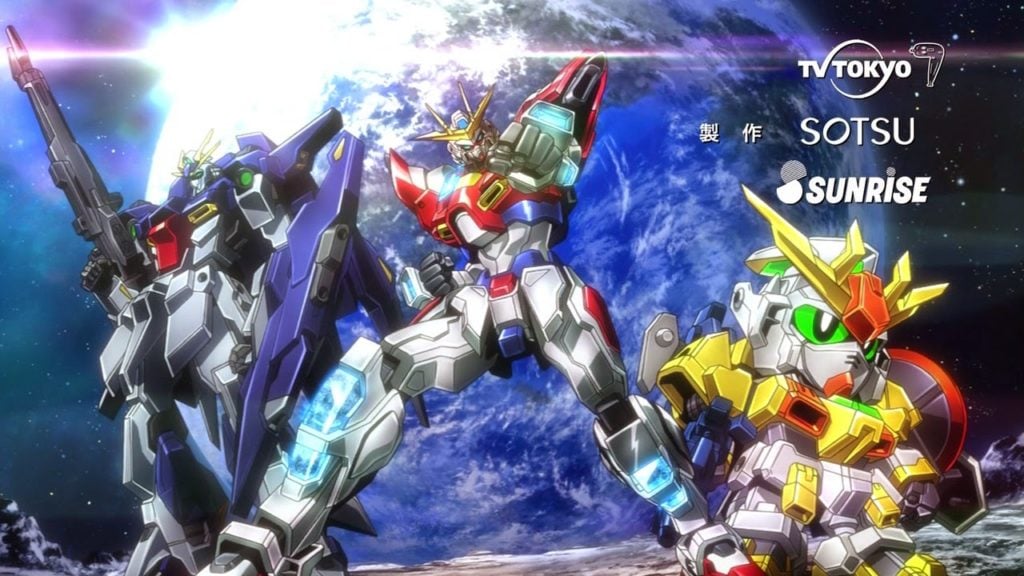 The first thing to understand is that Japan goes a bit crazy with cards. There are 3 really big games in the States and most of the Western world (Magic, Pokémon, and Yu-Gi-Oh), but I can’t count the amount of card games currently playable in Japan on just my fingers. There are stores here dedicated only to TCGs, with glass display cases up to the ceiling lined with rare and noteworthy cards from various different games. Many of the stores I frequented in the States tended to sell a variety of goods other than cards. For example, one of the most successful card stores in Atlanta also operates as a café and tabletop game store, but some stores in Japan are specialized in only 1 game and can still pull in enough profit to remain in business. Many of these tend to be branches of larger chains, but there’s 1 or 2 smaller local stores for just Yu-Gi-Oh within Nagoya. 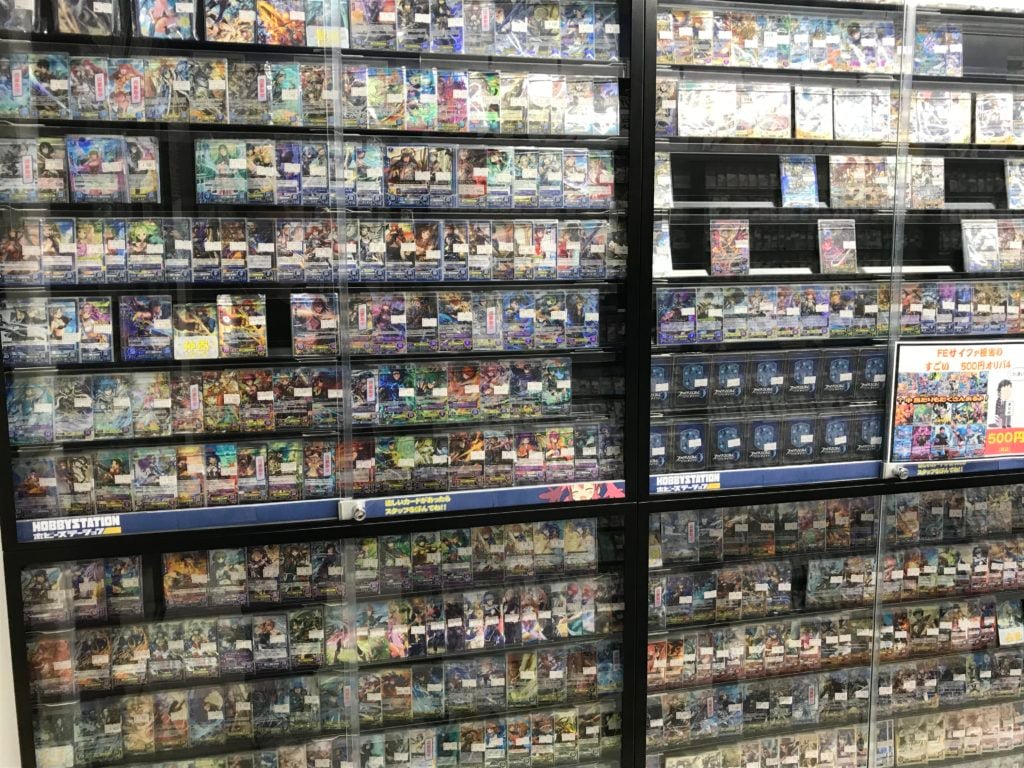 I currently play 3 games in Japan: Force of Will, Fire Emblem Cipher, and Yu-Gi-Oh. The communities for all these games have their own special quirks, but there are a few things that are consistent between them. The most noticeable traits are humility and patience. I know some conversational Japanese, and can process a few common phrases, but in general I get by off remembering what certain cards do or having an English database pulled up on my phone while playing. It might not be the fastest way to play, but many people I’ve encountered have been more surprised at a foreigner playing their favorite game than they are frustrated at the extra 2-3 seconds a turn might take from double-checking a card effect. You don’t need to be fluent in Japanese to play a card game in Japan, but you should be mindful of how much time your turns take. The best way to enjoy a game is to reciprocate the kindness you’re shown to others, and I’ve made plenty of friends at the stores I play at this way. This leads into my next point: Most Japanese players are friendly and just want to enjoy the game.

Maybe it’s the communities I was a part of, but I’ve always felt a tension when playing any kind of card game in the US. Plenty of people want to be the best, they want to win big, there’s the concept of investment into a game vs. the prize payout, and that’s something I’ve seen less of in Japan. Gambling laws restrict cash prizing in the country, so less people are motivated by profit and more so by feeling they’ve done their absolute best. There’s a sense of pride behind playing a specific deck or coming up with the next meta-defining thing, something you tend to see more in fighting games… another big Japanese hobby. 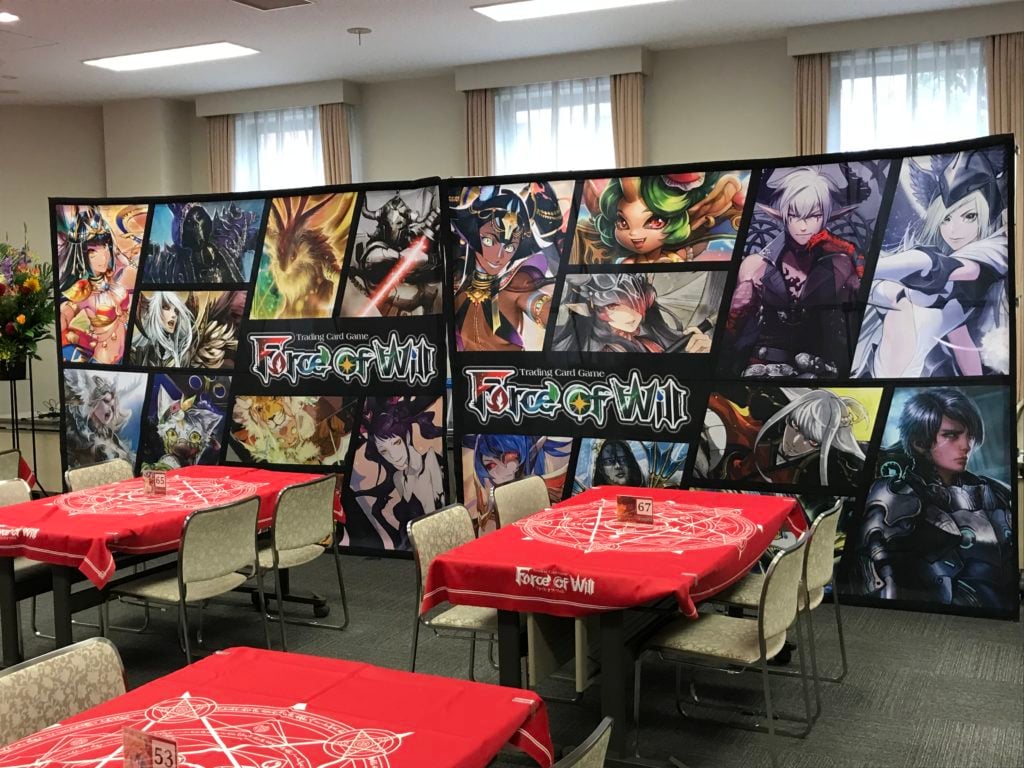 The venue for this year’s ‘Force of Will’ WGP.

It’s interesting how character identity is important to a lot of players across different games at mid-to-higher tiers of play, since that type of ideology tends to be associated with weaker players in the West. People will jump through hoops to get their deck for a specific card or archetype working, and often times you’ll have people at events identified as “The … Player” for their specific character or archetype. Fire Emblem is the game where you’ll see this the most since you build a deck around 1 main character. Players tend to pick their favorites. The game is less competitive by nature thanks to how its events are structured and more about embracing the things players love from the franchise.

That’s not to say there aren’t any competitive players, just that you’re less likely to encounter someone high-strung on making their monetary investment come to a net positive. I talked with a few English-speaking players on why they think it’s like this in Japan and the group consensus was “People are passionate about their hobbies, and want to support the things they love. You go to work to make money. You have your hobby to avoid the stress from work. It’s a bonus and not a requirement to make a profit from your hobby.” 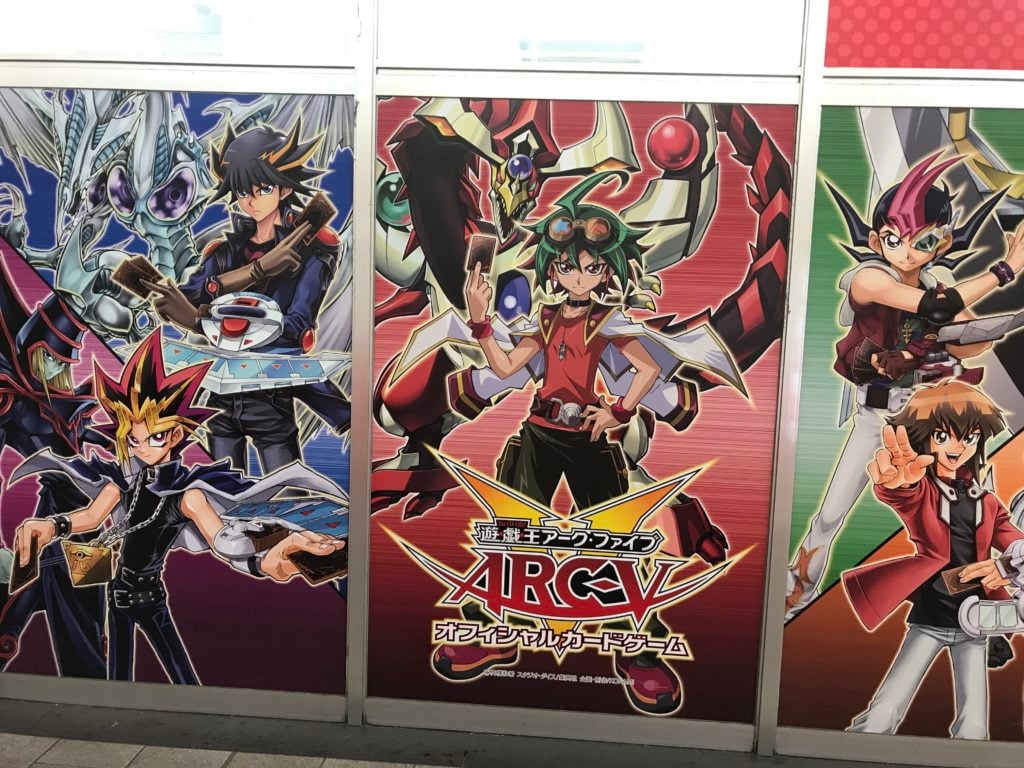 The ‘Yu-Gi-Oh’ section of a local Nagoya store has its outer wall lined with 7ft tall banners of the franchise’s main characters.

There are, of course, some negatives to being a non-native speaker in Japan when playing games. Mishaps and confusions with rulings are harder to resolve, and often times rulings can be completely different in certain regions than they are in others. Both Force of Will and Yu-Gi-Oh have had ruling issues in the past where the wording on a card is interpreted differently in separate regions, leading to different rulings. It’s also hard to talk and be casual with people outside of playing. That’s more on my end from having a harder time studying, but it’s an issue all the same.

TCGs are one of the best hobbies out there if you want to practice language skills. They build a friendly environment, are a lot of fun, and allow you to speak with people face-to-face. I’ve made plenty of friends in Japan through my hobbies, but I feel that many of the ones I met playing card games are the people I have the strongest bond with. If you intend to visit or move to Japan, I highly recommend looking into picking up a card game as a hobby. Many of them are affordable, there’s plenty of different games to try, and the language practice you get from them really helps to ground in the basics of Japanese.

“Check the Map” is a bi-weekly to monthly column that talks about various gaming-related places in Japan. While based in the Nagoya area, Taylor will be checking out different prefectures all across the country to find fun and interesting stores, arcades, and chains that celebrate video games and his other hobbies. The next part of the Game Center series is coming, there’s been some hang ups with getting footage of certain games.