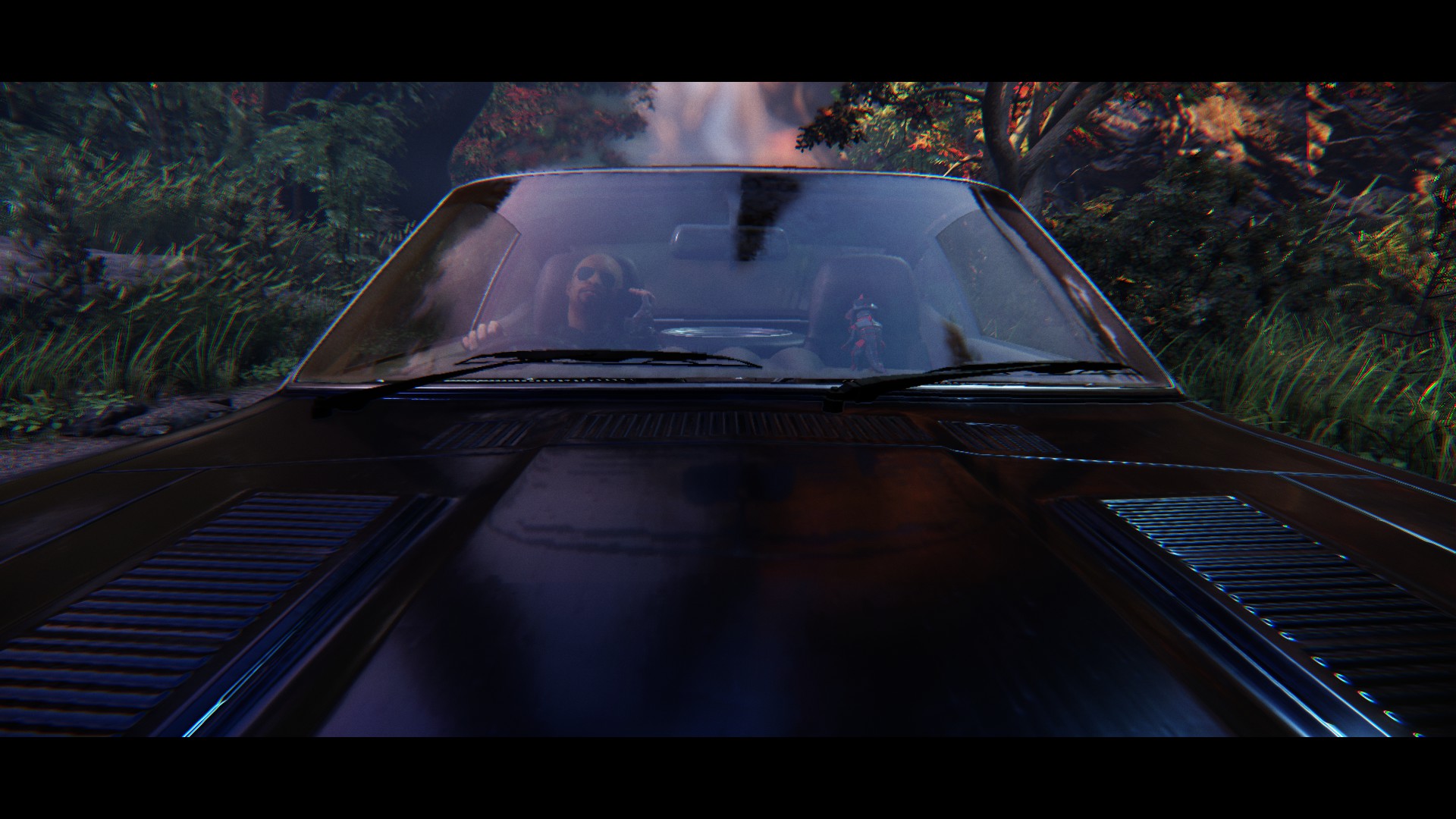 Earlier this year it seemed like shooters of old had come back to life thanks to the amazing experience of DOOM. It was fast paced, full of action, had a chainsaw, and a heavy metal soundtrack straight out of the mid-90’s. It was everything we wanted from a shooter and we loved it. But DOOM wasn’t the only classic shooter, and Machine Games aren’t the only company that can reboot an old series. In 2013 Shadow Warrior retold the story of Lo Wang in the style of an old-school shooter, and now Flying Wild Hog is back to try it again. Playing with Wang once was great, but is it good enough a second time?

Five years ago the human world and the Demon world collided, and now in the post-collapse Lo Wang makes a living acting as a hitman for anyone that pays. In particular, at the game’s outset he’s working for a powerful crime syndicate whose daughter, Kamiko, was kidnapped by the (still alive) villain/businessman, Zilla. Wang’s rescue goes south and Kamiko’s body turns demonic, so in order to save her, her spirit is pushed into Wang’s body while he and his friends figure out a cure. 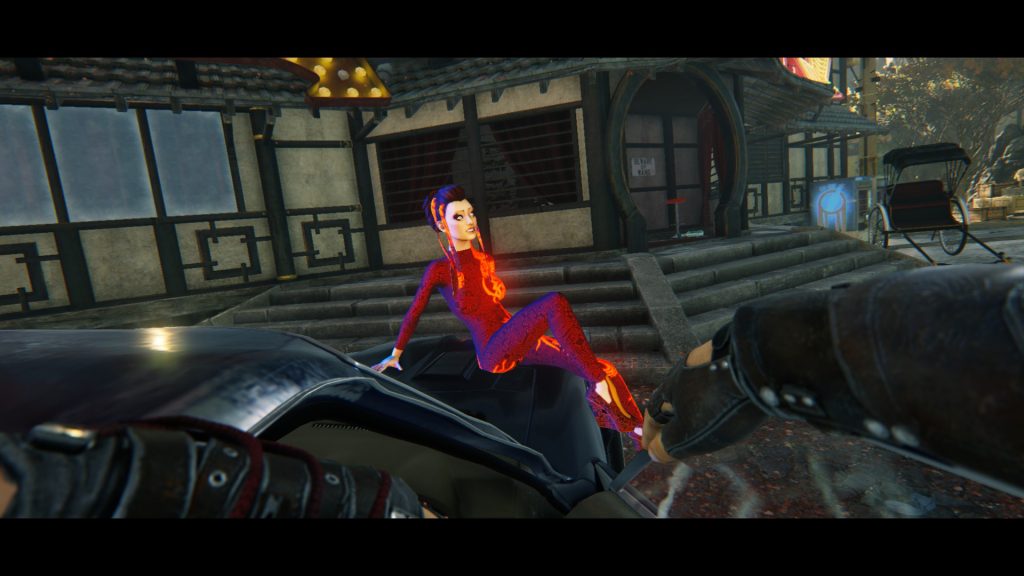 For what could be just another dumb 90’s style shooter, there’s an awful lot of writing and lore in Shadow Warrior 2, and the plot, cliche as it may be, is well told. There’s a great degree of world-building done through the scenery and layout, as well as the dozens upon dozens of collectibles you can find. The detail is fantastic and you can get lost just reading the scraps of info or item texts, all laced with humorous asides.

The actual dialogue is less thought provoking, and features a lot more dick jokes and swear words. It’s strange in a way, since it wanders from 13 year-old humour to quick-witted banter from an HBO comedy, usually within the same sentence. The jokes come fast, hard, and constantly, and nearly every line is worth at least a chuckle or too. Even the quiet moments of actual storytelling are handled in a funny way. The humour may not be for everyone—in fact some will find it downright tasteless and offensive—but if you can tune yourself to the game’s wavelength, its easily one of the funniest games in years.

Humour and writing are one thing, but a game, especially a game that sells itself on old-school action, needs to be fun to play. Thankfully Shadow Warrior 2 is easily one of the best shooters in a long time. Movement is fluid, probably more so than DOOM, and you’ll be dashing and flying around during fights like a true ninja warrior. Shooting controls feel great, nicely responsive, and customisable to your liking. If there is one complaint it’s that there are no more quick options for melee, which did break the flow of some fights, but its a minor complaint, and one forgotten in the flurry of battle.

Unlike its predecessor or its contemporaries, level design in Shadow Warrior 2 is incredibly open, giving you ample opportunity to explore and run across rare loot and special bosses. Campaign levels are pre-designed but side-quests are procedurally generated from templates, so while they may look and feel the same no two levels are exactly alike. The downside is there are often stretches of time where you’re not actually doing anything, just moving from one chunk to the next, and in a game that lives and dies on its shooting action, that’s a pretty big bummer.

When it does come to the shooting there are a lot to different ways to do it. Shadow Warrior 2 has over 70 different guns, and that’s not randomly generated like Borderlands, that’s 70 guns that actually look different. The illusion starts to break down once you realise that there are only maybe 20 guns repeated three times each, but the actual design of all the weapons, from the plain military hardware you start with to the demon infused weapons of late game, make each feel unique and interesting. There’s also a new loot system, where upgrades rain down after every enemy encounter, giving you ways to pimp out your boomsticks with special ammo types, environmental damage, and tweaks to their stats. 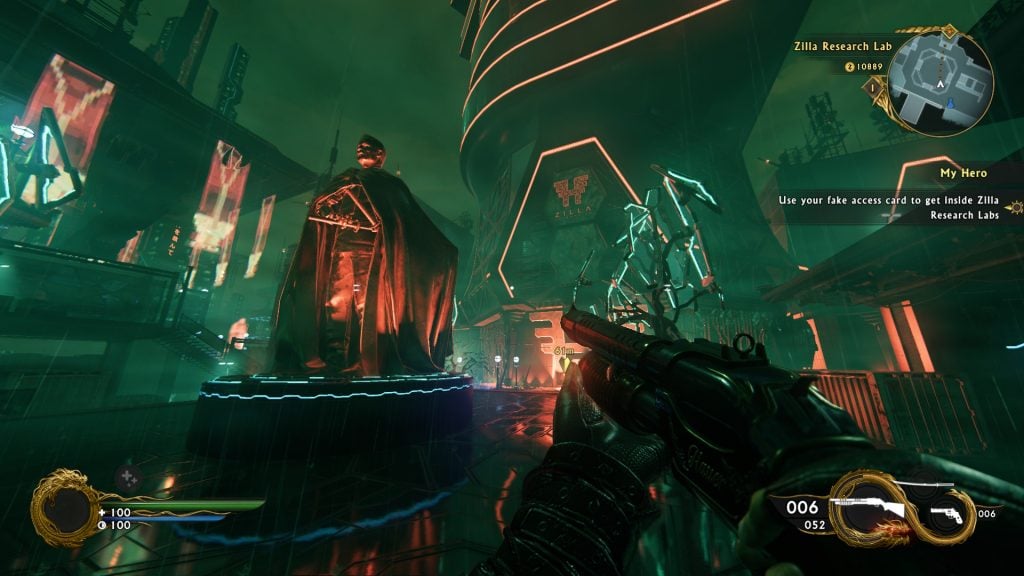 There are upgrades for nearly every facet of the game, and you really can play with your Wang however you want. If you want to spec yourself to just be a bullet-hose Wang, then apply upgrades for movement speed, fire rate, and extra ammo. Or you can create a girthy tank Wang and apply damage boosts, armor upgrades, and heavy weapons like rockets and machine guns. There are a lot of customization options and playing around with different builds between the upgrades and skill points feels great and offers plenty of different ways to experience the game.

Of course killing demons is always more fun with friends, and like Borderlands before it, Shadow Warrior 2 offers drop-in/drop-out co-op for up to four players. It’s a blast chopping and shooting through the hordes of enemies, although it does tend to turn the tougher foes into downright bullet sponges as a means of balancing, which can be annoying. Still, it’s a good time and makes for some fantastically memorable moments.

There are a few issues with the game, unfortunately. Side quest bosses are all essentially the same formula: get them to half health at which point they’ll become shielded, then defeat their minions and polish them off. There’s almost no exception to this rule and it makes these encounters a lot less exciting then they should be. The few campaign bosses you run into aren’t much better, and they make you yearn for shooter bosses from games like Serious Sam or Metroid, something with a bit more substance. Even the bosses in DOOM felt more challenging and engaging then these slugfests, and they’re a low-point in an otherwise great game. 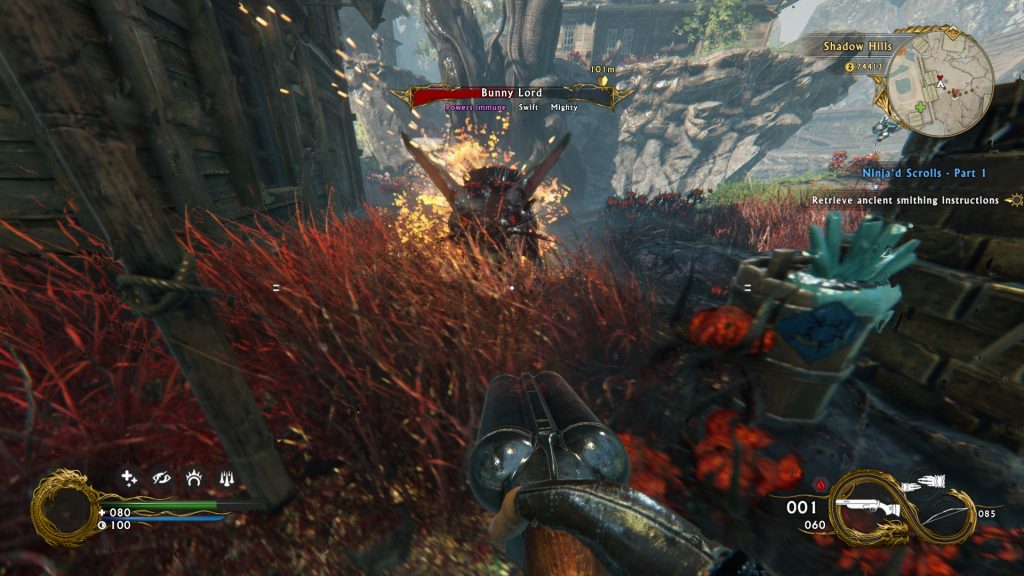 Random bosses don’t offer much of a challenge, but they are cool to look at

Graphically, Shadow Warrior 2 looks way better than its indie-game interior may let on, or at least it does at first. Level geometry is great throughout, no matter if you’re in the woods, a small town, or the cyberpunk dystopia of the big city. Enemy design looks cool and there’s a great deal of inspiration from comic books, ancient Asian writing, and traditional RPGs. Unfortunately there’s also a lot of repetition, and by the half-way mark you’ll likely have seen everything the game can throw at you. Even worse are the cutscenes. While character models on the cast look great, their animation does not, with animations cycling where they don’t need to and character movement coming across as stiff and unnatural.

The audio is a bit better, mostly thanks to the voice cast, although there seemed to have been some issues meshing re-takes of lines together. Halfway through a voice line you’ll hear it change a little and in a few scenes the audio quality noticeably changes from one character to the next. Sound effects are decent, although the weapon noises on the guns will leave you wanting more. There’s not nearly enough punch, and even heavy weapons like shotguns and rocket launchers don’t sound nearly as weighty as they should. The final saving grace is the soundtrack, which is a great mixture of traditional Japanese-sounding string arrangements and modern rock and metal to keep the blood flowing in the middle of a fight.

Overall, Shadow Warrior 2 is a great game, one that does its predecessor justice and remains true to what made its franchise, and the shooter genre of the 90’s, great. Its funny, irreverent, over the top, and completely insane, and that’s just the way I like it. Playing with your Wang has never been this much fun.