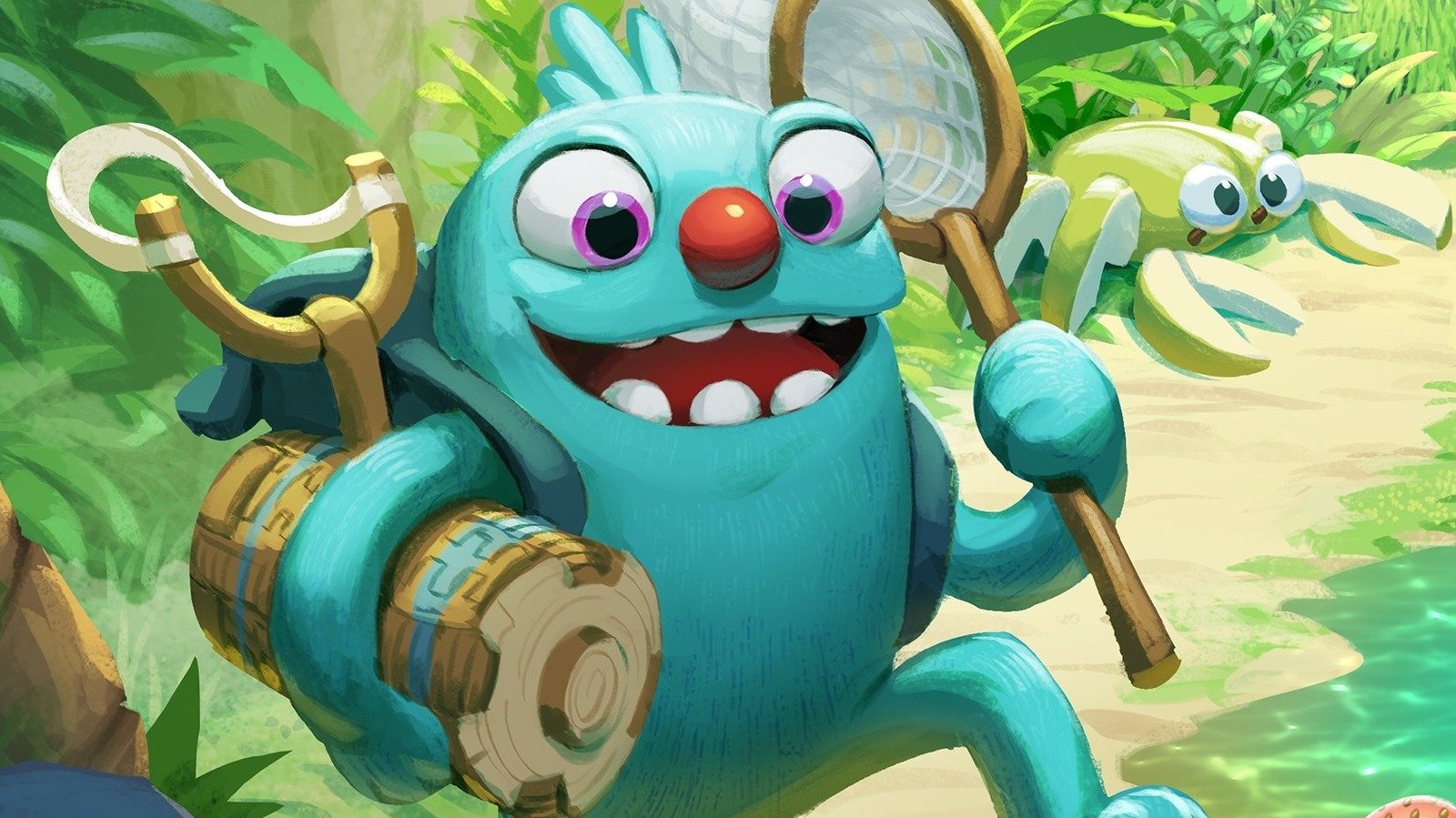 The start of a new console generation is always an exciting time. Big-name publishers do everything they can to convince consumers that their console is the one to beat. This is a chance for developers and publishers to take big swings, to prove that the future is here, now! For every Killzone: Shadow Fall, there’s a Resogun, and for this latest generation the indie hit at the start of the cycle is definitely Bugsnax.

Bugsnax excels at combining cartoony gameplay with surprisingly great character arcs. It is an unexpected delight, and a genuine blast to play. Though it might not be the perfectly-polished next-gen experience players are expecting, Bugsnax makes the case that memorable characters and solid gameplay are the most important factors in any game.

Bugsnax burst into the popular consciousness during a PlayStation 5 teaser event some months back. The reveal trailer was intriguing, with a Steve Irwin-esque documentarian laying out the details on creatures that are half bug, half snack. But somehow this trailer, even though it didn’t show any gameplay, was enough to pique the interests of the internet. And now that Bugsnax is finally playable, it still maintains an air of mystery that is sure to keep players intrigued.

Developers Young Horses have created a much more straightforward game than might be expected from the upbeat yet unsettling trailer. The player controls an unnamed journalist Grumpus (the fuzzy, Sesame Street-like creatures that populate Bugsnax‘s world), tasked with investigating the island of Snaktooth and reporting on the latest venture by explorer Elizabert Megafig. After crash landing on the island, the journalist is welcomed to the depopulated town of Snaxburg. It’s up to the player to bring the scattered population of Snaktooth Island back to Snaxburg and find out what really happened to their intrepid leader.

But solving this mystery will take more than investigative journalism. It will take research, intuitiveness, and Bugsnax. Lots and lots of Bugsnax.

Each of the characters has a chance to shine, from the nosy Beffica Winklesnoot to the dryly hilarious Snorpy Fizzlebean. But the stars of the show are undeniably the titular Bugsnax, extremely adorable walking meals that are a cross between Pokémon and combo meal from a fast food chain. Bugsnax even say their own names when they’re skittering about and hiding in the undergrowth. They’re spread throughout different sections of the island and capturing them using a variety of tools is the only way to progress the story. Tracking and capturing Bugsnax is fun, if a bit repetitive, but there are enough twists in the story and mechanics to keep players hunting Bugsnax for hours.

Bugsnax‘s gameplay is surprisingly conventional. In many ways Bugsnax feels like a more free-roaming version of Pokémon Snap, only instead of just taking pictures of creatures native to the island, you’re feeding them to hungry Grumpuses. To catch Bugsnax, players must first scan the creatures and observe their movement pattern. From there, it’s a matter of ensuring that they have the right tools for the job and can deploy them effectively. There’s a lot of satisfaction to be had from figuring out how to stun and catch the most stubborn ‘Snax.

Take the teeny-tiny Poptic, found in a desert locale. After a quick scan, players will realize that these ‘Snax are too small to be caught in the conventional trap. But these popcorn kernel critters burst into a bigger, fluffier, more catchable state after being exposed to fire. Fortunately, there’s a flame-flinging scorpian-jalapeño hybrid nearby, and with some clever tool usage and help from the environment, both Bugsnax can easily be caught.

The most difficult and mechanically toothsome Bugsnax to find and catch are the bosslike Legendary Bugsnax. Larger than most every other creature on Snaktooth, these ‘Snax only appear under certain conditions. Capturing them can be a complicated affair, but it’s fun to figure out to knock a flying pizza-moth out of the sky, or how to sink a sushi roll the size of a bus. These multi-step boss fights offer the most exciting gameplay in Bugsnax and also show off the wildly creative art direction.

There is little sense of urgency as players explore the island of Snaktooth. The player character has no life bar, and there isn’t really any sort of fail state outside of lost time. Even the boss fights don’t have any sort of time management factor; the only obstacle is the player’s patience. Bugsnax offers more puzzles than action, and gives players the freedom to appreciate their surroundings.

Bugsnax aims to for accessibility, but it can occasionally be difficult to figure out what to do next. The best advice? Keep exploring, and be sure to chat with every villager, especially after they’re safely back in Snaxburg. Each character has several quests to fulfill, and most of the time the way to any individual’s heart is through Bugsnax.

“You don’t know a thing about love! That’s why your wife left you!” Even Filbo Fiddlepie, the genial self-appointed mayor of Snaxburg, looks shocked when the generally-gentle Gramble hurls these words at Wampus Troubleham. Wampus doesn’t cry, or even deny the accusation; he knows he’s not perfect by any means. But he also knows that if Snaxburg is going to work and this found family is going to continue on, everyone needs to contribute. So he sighs, turns away, and goes back to trying to grow Bugsnax out of the ground instead of trying to steal the ones that Gramble keeps as pets. This tense scene is one of many that may end up surprising players who picked up Bugsnax based on its cutsey aesthetic.

Capturing critters and exploring the island’s various locales may be the initial draw but there is more going on beneath the surface of Bugsnax. Every character, no matter how funny-sounding their name, has an arc with a surprisingly satisfying resolution. This is Bugsnax‘s secret sauce: come for the critters, stay for the searing emotional reality. They might look like they’re out of a children’s show, but these Grumpuses have stakes, and it’s great seeing how they play out.

Every Grumpus is staying on Snaktooth Island for a different reason, and finding the “why” is a key part of Bugsnax. It may seem as though a few specific Grumpuses were simply dazzled by the charismatic Lizbert, but in reality everyone is running from something. The chance to start fresh on an island, free from the burdens of life back home, is tempting. At first each NPC simply asks the player to find them food to eat. After these initial fetch quests their true motivations are teased out.

It helps that the voice acting is, across the board, wonderful. The cast features some heavy hitters, including Yuri Lowenthal, Fred Tatasciore, and Cassandra Lee Morris, among many others. The writing is sharp and often poignant, and the voiceover helps give these Grumpuses gravitas. Bugsnax might not feature gameplay that takes full advantage of the Dualsense controller or buttery smooth visuals, but it still feels incredibly modern and forward-thinking with how fleshed out the cast feels.

Bugsnax are the keys to the hearts of Snaktooth Island’s citizens, but they might also be the one thing holding Bugsnax back. For every heartfelt character interaction, there’s one more fetch quest asking the player to track down a few specific Bugsnax. It’s always pleasant and satisfying to find and catch them, but after several hours of playtime players will certainly start to notice the palette swaps.

But the game never overstays its welcome. Bugsnax is the perfect palate cleanser for players eager to blast through Miles Morales or Demon’s Souls. It is wholly unlike anything else available right now, especially on next-gen consoles. Bugsnax represents more than the sum of its parts. It isn’t a game that can only be played on the latest and most powerful consoles; it’s actually available on Mac and PC via the Epic Games Store, and even on the PlayStation 4 for those reluctant to upgrade.

Instead, Bugsnax is content to offer an accessible experience. Players can drop in and capture a few Bugsnax at their leisure. The writing and characters subvert expectations at every turn, which is enough to mask almost any flaws in the gameplay. It might not be what players think of when they think of the next generation, but it’s a great bridge from the current one.