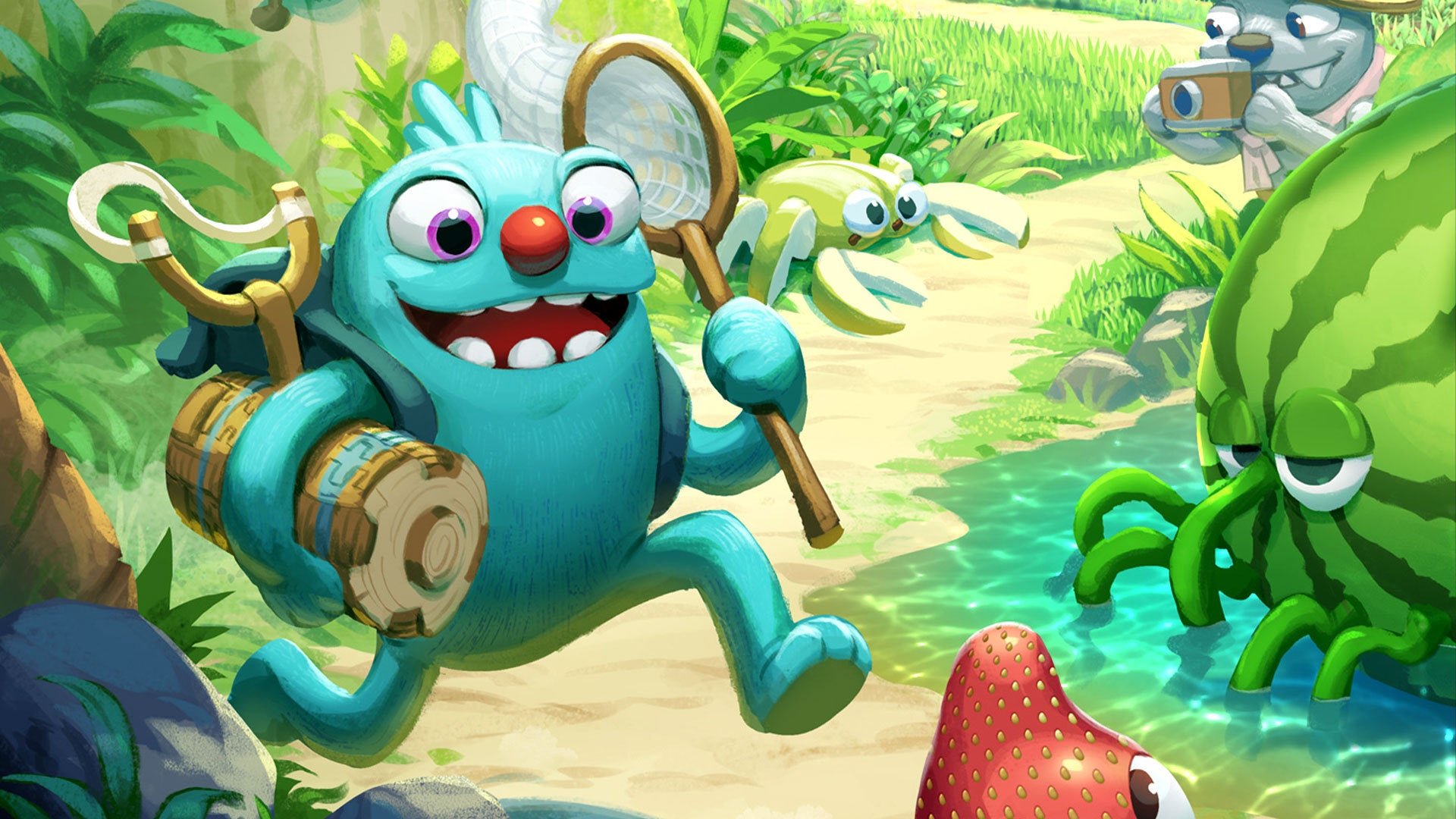 Everybody’s talkin’ ’bout Bugsnax (again)! Young Horse’s 2020 breakout hit is finally taking its acclaimed expedition to new platforms this week. As Bugsnax finds itself back in the public eye thanks to a hefty DLC expansion, the Isle of Bigsnax update, fans and newcomers interested in playing the game on Nintendo’s hardware are about to be hit with a double dose of satisfaction. Bugsnax on Nintendo Switch was always bound to lack the smooth framerate and cleaner visuals of its competing consoles, yet the grumpus adventure is still worth salivating over with its hybrid release. The Nintendo Switch iteration of Bugsnax is a competent port of a zany and heart-wrenching journey, albeit one with a few noticeable (and once again expected) technical shortcomings.

For those unaware of this hybrid creature phenomenon now out on Nintendo’s characteristically similar system, Bugsnax puts players in the shoes of a journalist as they venture to the mysterious Snaktooth Island for their next investigative scoop. Originally invited to interview head Bugsnax researcher Dr. Elizabert “Lizbert” Megafig, players quickly are met with the dangers of Snaktooth Island upon their crashlanding. With the puppet-esque grumpus community in shambles and their leader missing, Bugsnax has what every good story needs; a tight hook, lovable characters, cute creatures, and an intriguing stream of content that will keep players pushing through their escapades. The hysterical and dark island of literal food bugs is still a shocking surprise.

Throughout Bugsnax, players will catch and collect the titular creatures while reuniting Snaxburg and solving its inhabitant’s many problems. With several locations to explore and documents to collect, Bugnsax asks players to thoroughly venture around its interconnected island to accomplish all sorts of objectives. Without any spoilers whatsoever (and if you are new, you absolutely do not want to be spoiled), Bugsnax presents a wonderful story and collectathon to participate in over the course of its dozen-plus hour adventure. The emotional weight and sheer wonders of Bugsnax still remain after two years since its initial release. The core story and game-design aspects deserve all the praise it was formally given by critics and audiences alike.

Of course, Nintendo Switch players will want to know one question before they bite into purchasing this late port: is it any good?

Yes, it is! Content-wise Bugsnax on Nintendo Switch contains all of the collectibles and locations found in the original release alongside the latest Isle of Bigsnax update–nothing has been cut or trimmed for this version despite being sprung onto less powerful hardware. This is the complete Bugsnax experience; all the tasty bugs, grumpuses, and expedition elements are intact. In fact, because of the DLC new players will arguably be getting a better storytelling experience than those who have already played the game as the update delves further into some of the late-joining cast members. As alluded to before, the technical sacrifices this port of Bugsnax makes and some new pesky issues are the only downgrades Nintendo Switch players will be met with.

Before going over the technical jargon that is driving all the concern, readers should note that the latest release of Bugsnax comes included with the Isle of Bigsnax update right out the gate and accommodates for the console’s lack of trophies. In the Bigsnax update (which is now also available for free on PlayStation 4 and 5), a small home for the player has been added to Snaxburg that can be customized, new special hat snaks can be found in the wild, and of course, more adventures await on the extra Bigsnax island. Aside from the island filled with massive Bugsnax to track and capture, none of the miscellaneous additions to the base adventure bring anything particularly noteworthy to the game’s already lengthy list of collectibles. If anything, the needed fast travel mechanic is the best addition to the update outside of the Bigsnax-littered island.

The bonus objectives and charming custom house are welcome additions to Bugsnax, yet they are best described as miscellaneous bonuses. Developer Young Horse has definitely given players more incentives to revisit fully-documented areas of the map, but the Bigsnax update extras are optional side servings to the main course–good ones, but again, miscellaneous and even passable. There are over 180 items to collect through individual challenges, and the special Bugsnax wearing quirky hats can be rather difficult to find. The Bigsnax update’s highlights are its titular area that players will have a blast venturing into–which was to be expected as there are loads of surprises to uncover and challenges to conquer in this story-driven territory.

On the subject of challenges, in the original PlayStation release of Bugsnax, the game naturally came included with a trophy list players could complete. Considering the Nintendo Switch has no online achievement system, it is worth commending Young Horse for surprisingly going through the trouble of including all of those trophy-hunting tasks in this iteration through another sub-section in the journal. While the addition was perhaps completely unnecessary, keeping these challenges alive on Nintendo’s platform is appreciated and helps bring yet another collectible system to Bugsnax that completionists will lavish over.

Despite all of its extra highs, where the Nintendo Switch port of Bugsnax can fall short is in its technical shortcomings that waste potential hardware opportunities (gyro and HD rumble) and hinder impactful moments. Bugsnax does not run buttery-smooth on Nintendo Switch, but it’s performance never causes issues that will break the immersion. When Bugsnax is rendering a lot of objects and characters on screen, the game’s framerate can noticeably begin to spiral downwards while the resolution seemingly stays locked at 720p. Some areas do require longer load times than others; disappointingly, Snaxburg is one of these so be sure you are ready to venture out into the wild. What I did not expect to find were new bugs that weren’t the delightful ones found on the Bigsnax island.

The larger issue with Bugsnax on Nintendo Switch can be some of the bugs found throughout the game that were not in the original PlayStation release–don’t worry though, there are still way more actual Bugsnax than bugs to see. While many of these were patched by Young Horse leading up to the game’s launch day, there are still some pesky issues that remain at launch regarding select tools. Outside of the graphical and framerate fidelity issues that can come up, the Buggy Ball noticeably really lives up to its name. Occasionally the important piece of bug hunting equipment along with its laser pointer can haphazardly work. It’s frustrating at times, but again nothing that will bring down the grand picture.

Bugsnax has always been a treat, and Nintendo users are not getting cheated out of the full buffet Young Horse has to offer with their beloved creature-collecting picture-taking expedition. Despite some expected technical shortcomings, Bugsnax is a delightful experience in both the Nintendo Switch’s docked and handheld modes–perhaps more so the latter, but what else would you expect from a port of a PlayStation 4 and 5 game? For anyone who hasn’t already put their investigative caps on and ventured to Snaktooth Island–or perhaps just wants to double-dip on a portable experience, Bugsnax will only provide players with the taste of satisfaction on Nintendo Switch.