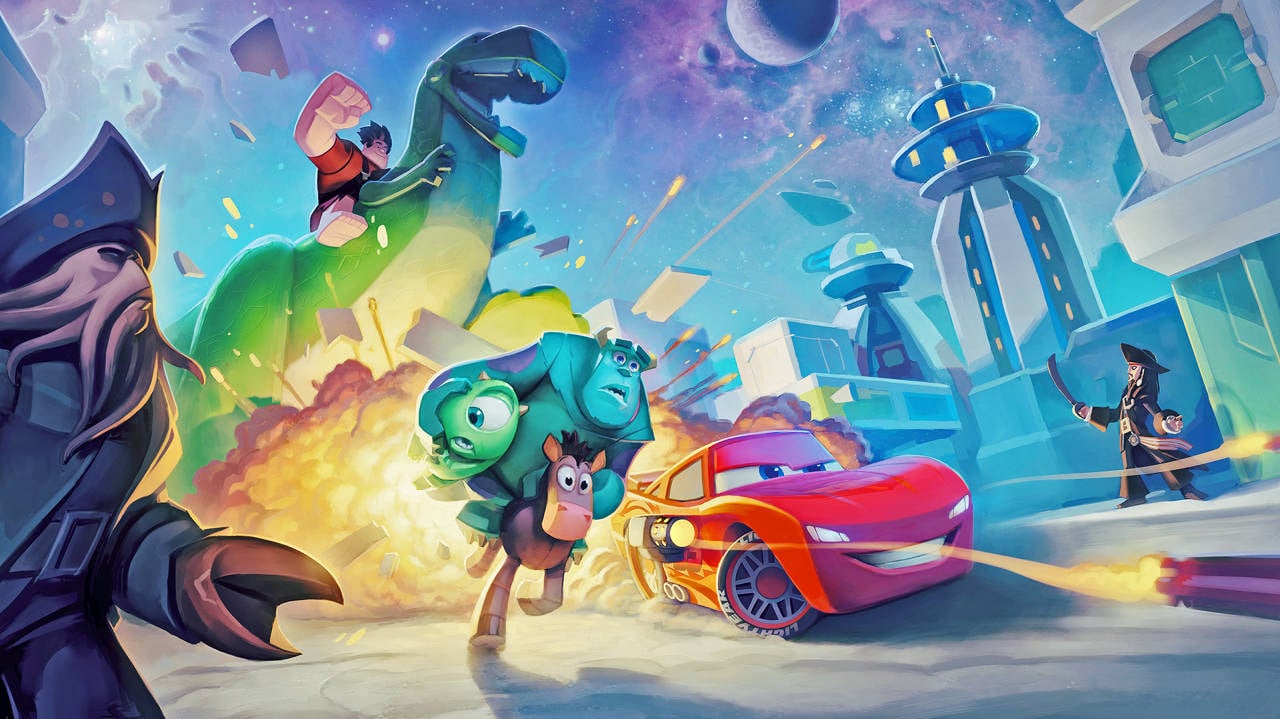 My name is Robin Smith, and I am an addict.

I was infatuated with the concepts behind Disney infinity from the start. It’s original trailer had promised a game which would allow for the customisation of Minecraft and the gameplay of more traditional game types. Structured yet free. It sounded like a lofty goal, but this was first party, it had some great starter I.P. available for use, and had a really sweet stylized look that tied all these characters and worlds together. The game that initially arrived was not quite what people expected. It was more and less at the same time. I know that’s super contradictory but allow me to elaborate. Toys to life as a concept had looked okay. Skylanders seemed to be an okay, if simple, opening gambit in the new generation of entertainment, and the concept of having a toy that worked in a video game was cool.

It’s always struck me as odd that people found the whole concept of toys to life as odd, or a waste of time. Even underhanded DLC peddling. I don’t know about you but I bought action figures and models growing up: X-Men, Star Wars, and Star Trek even. I’m sure that whatever your interest was, it was catered for by some sort of accompanying toy. So the concept of a collectable existing that ALSO works in one or many games is like magic to me.

The first problem with Skylanders though, for me anyway, was it’s limitations. The first Skylanders release was a single videogame, you put one of the Skylanders figures in the game and swap them out for others as you want, but at the end of the day you have a single story and game to play through.

Once you are done you have to wait for the next title to come out before you have a new game to play. No DLC or add-on’s to expand the actual game content, just what you start with. Some areas in that game we’re locked off from players though, which leads to the second problem Skylanders had on release.

Manipulative in game practices build to siphon money from players. As mentioned before, Skylanders games have areas that are locked off from players. In order to unlock the gates preventing access, you had to buy a new Skylander to access the locked content. Instead of providing additional content to players who choose to buy it, it prevents you from accessing content you already own.

Disney Infinity at least appeared to be doing something a little less manipulative than that.

The key thing to see Disney Infinity as was not as a game, but instead a games console or platform. Buying the first Disney Infinity release; the starter pack with base and three figures; gave you access to a set of three games. Each game was a stand alone title that had it’s own cast of characters and story. Already Disney Infinity was providing a more reasonable package when compared to its competitor. Each of it’s three launch games we’re about the same length as a Skylanders campaign, or budget kid friendly platformer, but they had the added benefit of being  based on likable, popular franchises and produced to a high quality.

Beyond Infinite’s three starter pack playset games, there was also the toybox mode. One the games original release this was actually the weakest part of the Infinity package. While it had amazing depth and a range of things to unlock and do the mode was just overly obtuse for your likely average Disney Infinity fan. Heck even I had trouble with the original releases’ interface.

Over the following years updates this part of the game become ever deeper and also more user-friendly and refined. The sheer amount of creative freedom contained within the Disney Infinity toybox is literally mind-boggling. Did I mention before that Infinity was more a platform then a game? After the initial release of the first Disney Infinity starter pack we saw the release of a further eighteen playsets for the platform. Each one would come with one or more figures you needed for the game included, unless it was one of the six toybox game titles which allowed for nearly any character to be used.

While nearly every one of these titles is a well made and fun title in their own right, and they cover a range of styles from cart racer to adventure game and Powerstone like brawler, my personal favorite Infinity game highlight was the Spider-Man playset, which provided some of the most interesting gameplay moments and actually was a super serviceable open world Spider-Man game. All this information leads us to me, here, today. Since the announcement of the closure of Avalanche Software and the cancellation of all future Disney Infinity products (Leading to the loss of 300+ peoples jobs) by Disney the hunt for Disney Infinity figures has become extra affordable. At the same time older and rarer characters and add-on power discs have become all the harder to find.

Those that have been possible to get are up to a third their original price and this has turned what had originally been a mild interest for me, into a full blown obsession. At current count my collection stands at fifty-nine of the one hundred and twenty-one available figures (if you count variables and alternatives such as FX Star Wars characters) and there’s not a moment that doesn’t pass when I’m not looking up deals and sales online or in local stores. Really I know I probably should stop, before my girlfriend kills/leaves me, but in all honestly I don’t want to.

Disney Infinity has provided the best example of a great concept and its potential. It was the best quality take on the toys to life genre and has provided both hours of entertainment for myself alongside a great and in depth game development tool for young players looking to get into development later. It’s a shame that the trajectory for the series was so short.

Now if you don’t mind, I’m going to head out to town, I heard that there’s a Yoda on offer with my name on it.