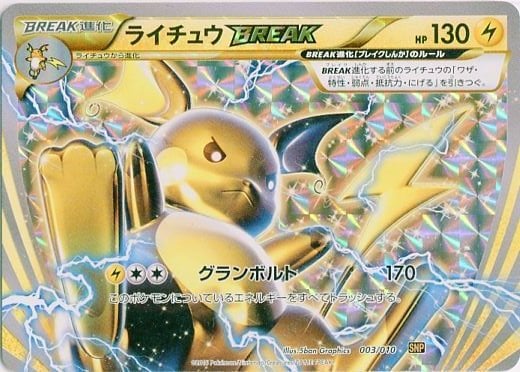 With the recent “leak” of Pokémon Sun and Pokémon Moon as well as the upcoming Pokémon Direct this Friday morning, the future of the Nintendo franchise seems to be both bright and imminent. As fans eagerly await an official reveal, it is exciting to think that new monsters, gyms, and gameplay elements may be on the horizon, but so far, no details have been announced. That being said, Nintendo quietly unveiled a previously unseen tactical component of the Pokémon battle system, the “Break” Evolution, in late 2015 with its new BREAKthough and BREAKpoint expansions to the Pokémon Trading Card Game. While this new form of evolution has yet to be seen within the Pokémon video game universe, it is a definite possibility that both Moon and Sun may feature this “Break” element in-game alongside Mega Evolutions.

Within the rules of the Pokémon TCG, “Break” Evolutions are simple to implement, as (like Mega Evolutions) a trainer’s monster only “break evolves” while in a trainer battle. After the Pokémon has evolved, its “break form” will generally have an additional ability and gain increased HP while still retaining its attacks, weakness, resistance, retreat cost, and previous ability. Additionally, the Pokémon’s appearance becomes solid gold and metallic, often featuring silvery crystal and pink lightening effects. So far, only a few Pokémon have been given “Break” Evolution cards, with fan favorites like Greninja, Zoroark, Chesnaught, and Riachu receiving the treatment.

The real question is, could this be a new gameplay element that will be highlighted within the rumored Pokémon Sun and Pokémon Moon? From a tactical standpoint, it seems like a definite possibility, as “Break Evolutions” incorporate starter Pokémon and could be used as an additional counter to the relatively overpowered Mega Evolutions, adding another level of strategy and depth to the game. Perhaps the metallic features and electric blasts seen in the art of the Pokémon Trading Card Game “Break” cards could relate to the new legendary Pokémon, Magearna, which was only officially announced by Nintendo less than a month ago. It could even be explored, as these things often are, in the upcoming Pokémon movie featuring legendaries Magearna and Volcanion. Ultimately, if “Breaks” are implemented, how will this type of evolution be explained within the storyline? How will it work in-game? Only time will tell, and for now, fans will have to wait for more details until the Pokémon Direct streams tomorrow morning.