Blue Sheep is a sentimental and stunningly well thought out game. Developed by the two-man team at Noetic Games, Blue Sheep throws you into a mysterious world enveloped and plagued by misery. Everything about this game sets it up to be an exceptional journey about battling depression and guilt. The player controls a young girl searching for the lost notes of her brother who committed suicide by searching a cryptic and surreal world where she must free musicians in order to fight the ever growing “beast”.

Blue Sheep is a game one desperately wants to love. It carries nearly everything to be an exciting, mysterious and alluring adventure platformer. It is clear that developers Gabriel Priske and Ryan Kratt poured their hearts and souls into this game. According to Noetic Games, mental illness has plagued both these developer’s lives in different ways and so they joined forces and set out and construct a game that explores forms of mental illness in a creative manner. Blue Sheep is that exploration. The developers were inspired to devise a game that explicitly deals with such issues since so few games dare to touch the subject. The fact that these guys created a game with such deep, meaningful cuts is daring and admirable. This concept is so strong, but yet ultimately fails due to poor execution of basic game mechanics. 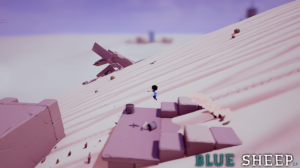 The fault that lies in Blue Sheep is how it controls. It has a reminiscent feeling of an early flash game- formless physics and a floaty main character. The hit detection is surprisingly ill-defined, leaving the player having to repeat an action, even something as simple as a normal jump across a small gap, multiple times. When one does jump, there’s no telling how high the player will jump, or where they will land. The controls for this are somehow both sticky and loose. Another problem within the game are the many glitches. At times, enemies will either appear or disappear from thin air, weapons that the player has been using will be lost, and loading a save point will cause the background to glitch out, detracting from the beautiful scenery. Mechanical mistakes such as these take a lot out of the story and render some parts of the game nearly unplayable. This game looks as though it should feel good to play, but does not deliver on that front

The main body of the gameplay revolves around solving puzzles in order to get from point A to point B. The puzzles themselves are inconsistent and can sometimes be quite obtuse. Some puzzles are simple, and others may take the player many rounds of trial and error, with the actual solution not seeming to have any connect to the established game mechanics, which leaves the player unsatisfied when a solution is eventually stumbled upon. Note that this is not true of all the puzzles within Blue Sheep, but that a good third are hindered by floaty controls or seemingly random solutions. Another component of gameplay within Blue Sheep is combat. You fight enemies either using simple one-button combo mechanics or by shooting them with a bow and arrow. The enemies the player encounters are few and seem displaced from the rest of the established world. Enemy encounters are largely repetitive and ignorable but occasionally bring with them a tremendous annoyance. This mainly happens during the final boss battle when the player faces “The Beast”. The difficulty spike here is ridiculous. The designers simply throw every enemy ever encountered at the player, overwhelming with numbers to the point that winning becomes more about luck than skill. If the player dies during this boss battle, they end up spawning with about a quarter health, making victory essentially impossible unless they manage to avoid being hit entirely – which is in itself basically impossible when the fight mechanics are taken into account. It is cheap, unfair, and out of place. 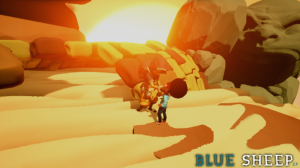 Visually, Blue Sheep is stunning. It creates warmth in a stylized environment that has an almost epic cinematic feel. Some moments within the game are literally awe-inspiring. Blue Sheep is definitely one of a kind. It features a main female protagonist who is a person of color. A protagonist like this is rarely  seen within games, and it’s nice to see one featured for once. Blue Sheep also deals with a subject that is difficult to talk about and creates a story that is essentially universal to humanity.  All of the good in this game hides the bad like a wolf in sheep’s clothing.