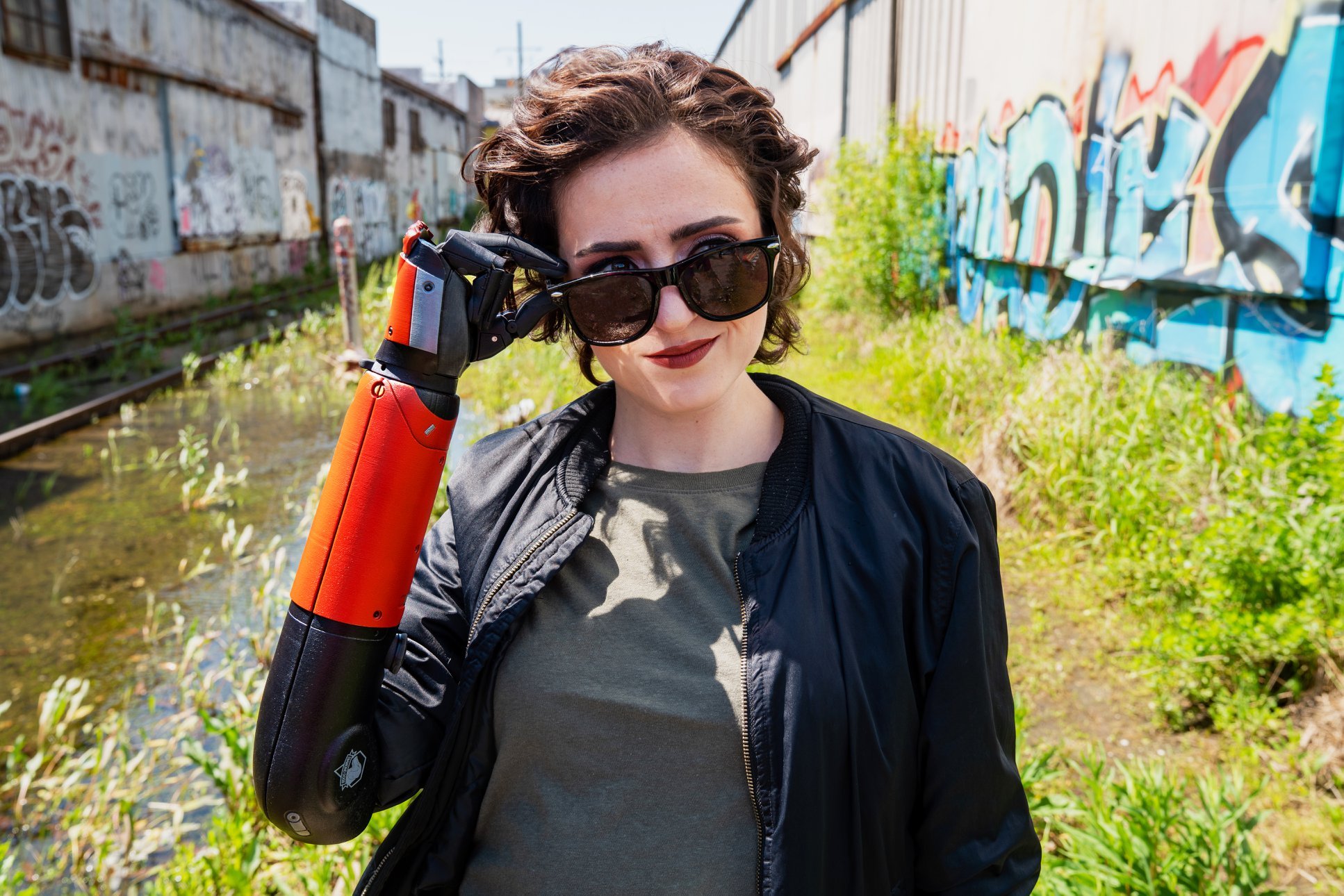 This is something that I did not even know was a thing but I am so very glad that it is. Laiken Olive is an artist, actress, model and screenwriter who was born without a right hand. An advocate for those with disabilities and limb differences, Laiken is also the first person in the United States to be fitted with the ‘Venom Snake’ bionic arm- a prosthetic designed by the Open Bionics company and based on the bionic arm used by Solid Snake in the Metal Gear Solid games.

The official Metal Gear Solid Facebook page shared the news- as well as some information on Laiken including  their experience with prosthetics in the past and their connection popular Metal Gear Solid game franchise in the following post:

Artist born without a right hand is first in the USA to receive Metal Gear Solid bionic arm from Open Bionics!

Laiken Olive, whose pronouns are they/them, is the 21-year-old Artist from South Louisiana who has become the first recipient of the ‘Venom Snake’ bionic arm. “I always get asked to do Metal Gear Solid cosplays on TikTok” says Laiken, who has amassed 26,000 followers with well over 1 million views.

When talking about the game, Laiken can see synergies with personal life experiences, “in Metal Gear Solid, the main character wakes up from being in a coma for nine years, and I’ve been waiting a decade to have a prosthetic that is functional and intuitive to my needs.”

“The first time my insurance claim was denied for a bionic arm, I was offered an arm with a heavy body harness most commonly known to be worn by military men. It was so heavy and put a strain on the whole body which seemed so counter-intuitive.”

“Growing up, the only reason I would wear my prosthetic was to hide my difference.” Laiken says a lot more needs to be done to break barriers the limb difference community face daily – starting with access to prosthetic limbs.

Going through the insurance appeal process was an “emotional roller-coaster,” says Laiken. After a strenuous year of appeals Laiken had their Hero Arm fitted.

This bionic arm is now available for amputees in clinics across the USA and more details can be found on Open Bionics website.

I think this is such a great advancement in technology but also a fantastic way to provide new and exciting prosthetics options to those with disabilities, especially those like Laiken who are fans of pop culture and gaming. I mentioned yesterday- in regards to the PlayStation 5 themed sneakers that are in NBA 2K21 but are also being sold in the real world- that being able to blur the line between video games and reality by creating in-game items in real life is probably going to be the next step for the future of gaming. However, being able to bring forth items like prosthetics from video games is a whole other level. Gamers and pop culture enthusiasts with disabilities could have the chance to become like their favourite characters who share their own physical impairments. Open Bionics is truly creating a bright and brilliant future for those who are differently abled but it is also creating opportunities that may once have seemed like an impossible dream for those with disabilities.