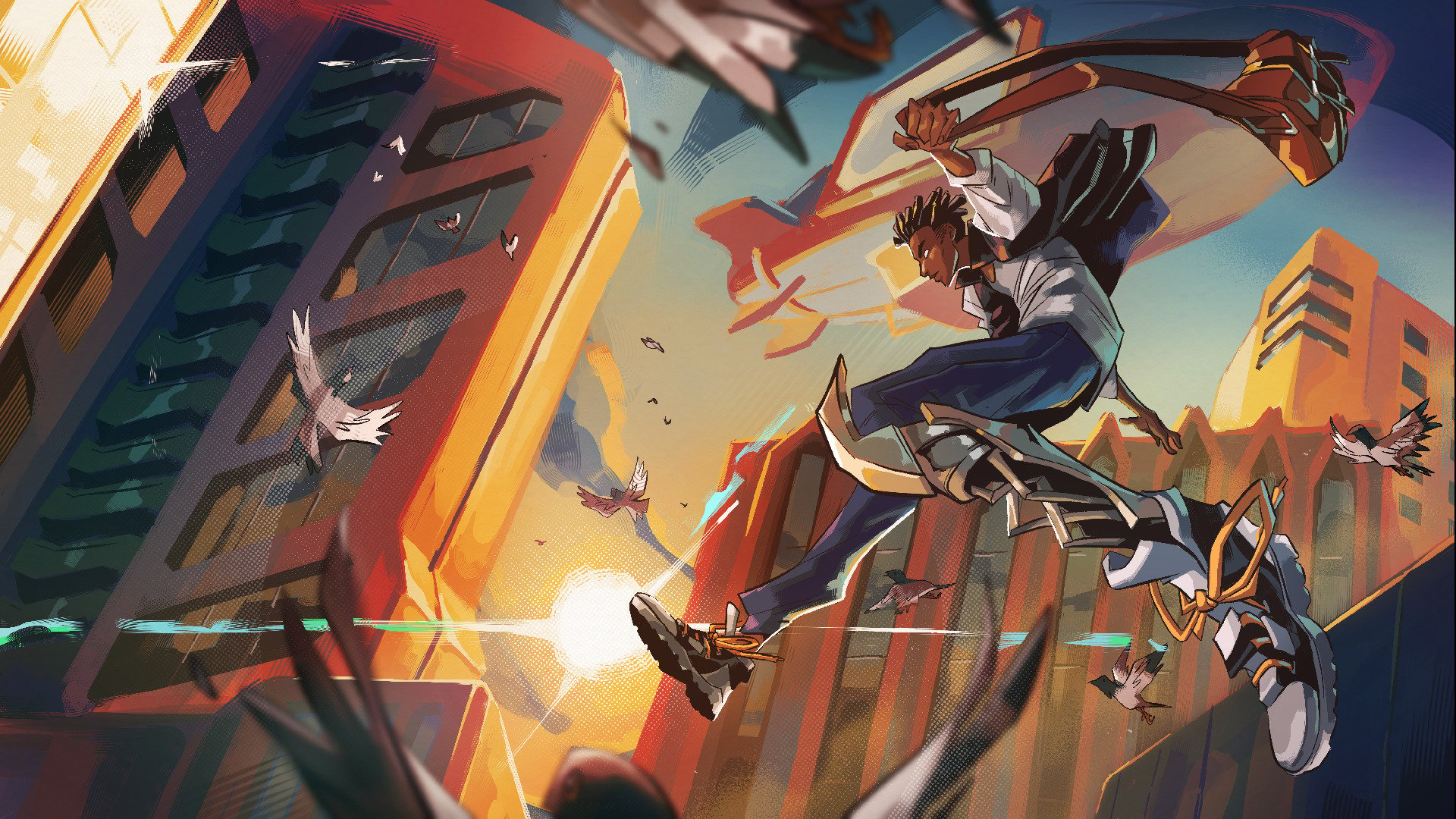 Autorunners might not have a reputation for being the most personal games around, but Aerial_Knight’s Never Yield challenges that assumption. With its creator’s Twitter handle enshrined in the very title, Never Yield is infectiously stylish and driven by a clear creative vision from start to finish. It blends simple yet satisfying rhythmic gameplay with an intoxicatingly funky soundtrack to create a package that might not last long, but that only gets better with every subsequent playthrough.

A Funky Flight for Freedom

Never Yield’s wordless cinematics do not offer many concrete details, but one thing is immediately clear: this is a game about freedom, about never giving up (or yielding, if you would). Players control a young man named Wally in a futuristic hybrid of Tokyo and Detroit who soon ends up on the run after uncovering a secret that can change the world around him. The narrative introduces a few wrinkles along the way, but even if it is occasionally marred by janky animations during cutscenes, the story helps add a stylish framework to the gameplay.

Dashing through the game’s neon-soaked streets will feel familiar to anyone who has played any other runners. You run through every stage automatically, using a handful of actions to overcome the many obstacles that end up in your path. Never Yield gives you only four main actions, each one tied to one of the face buttons on the D-Pad: you can run, jump, dash, or slide. While the challenges you face and the environments you explore will vary over the game’s thirteen stages, the gameplay largely boils down to those four actions: dashing through doors, jumping over fences, and so on.

At times, Never Yield can feel simple even by the standards of a genre known for its simplicity–obstacles and locations can sometimes blend together either due to similar designs or outright repetition. However, a few subtle tweaks to the core gameplay loop elevate the overall experience. Most significantly, the game makes clever use of color-coding its obstacles to guide the player about how to get through them. For example, obstacles that you have to jump over will always be colored in red, while anything that you need to dash through will be blue, and so on. These visual cues make it easier for the player to settle into a seamless groove through each level, making the perhaps repetitive challenges that arise along the way feel satisfying to overcome.

Never Yield’s flair for the dramatic is another way it sets itself apart. Shifting camera angles, dramatic camera work, and dynamic environments are all only a few ways that the game makes each level feel memorable. Its stark cityscapes might occasionally blur together thanks to their dark color schemes filled with grays, blacks, and purples, but a handful of memorable scenarios make the action stand out. In particular, the final few levels really dial up the challenge as well as the cinematics, giving the title a worthy final sprint toward the finish line.

Aerial_Knight’s Never Yield may not be a traditional rhythm game, but nonetheless, its soundtrack is perhaps the best thing about it. Based on punchy basslines, soft keyboard tracks, groovy rhythm guitars, and funky saxophones–not to mention the occasional vocal lines–Never Yield’s soundtrack is excellent in its own right but even better when paired with each of the game’s levels. Its environments might not always feel distinct, but the tunes accompanying them never fail to stand out with catchy melodies and rousing beats.

Never Yield may have plenty to offer in terms of personality, but the same cannot exactly be said when it comes to its content. It hearkens back to arcade titles of yore in its commitment to a simple and concise gameplay loop, where it takes only about an hour and a half to see the game through to its conclusion on normal mode. This brief runtime might sound anathema to modern players accustomed to games offering dozens of hours of original content, but again like those arcade classics, Never Yield leverages its brevity to offer an experience that only gets better with each playthrough.

New difficulty modes unlock after completing the main campaign, and although hard modes might be little more than nice extras for hardcore fans in most games, Never Yield’s heightened difficulty options actually represent some of the best content on offer. While the normal mode might feel a bit too easy at times, the “Hard” and “Insane” difficulties remedy this issue by bumping up the speed to create greater tests of skill throughout the game’s levels. It’s all about replaying again and again in search of higher scores, and in this way, Never Yield is a rousingly addictive success.

All these elements – its gameplay, its set pieces, and its aesthetics – combine to give Aerial_Knight’s Never Yield an admirable sense of creative consistency and coherency. Every aspect has a purpose, making the game a delightfully consistent package expressing not only a love for the genre itself but also an expression of the creator’s own background with its multicultural focus. Elevated by what has to be one of the best soundtracks of an indie game in recent memory, Never Yield leverages simple yet well-executed gameplay to provide a new, engaging, and personal take on the autorunner genre.