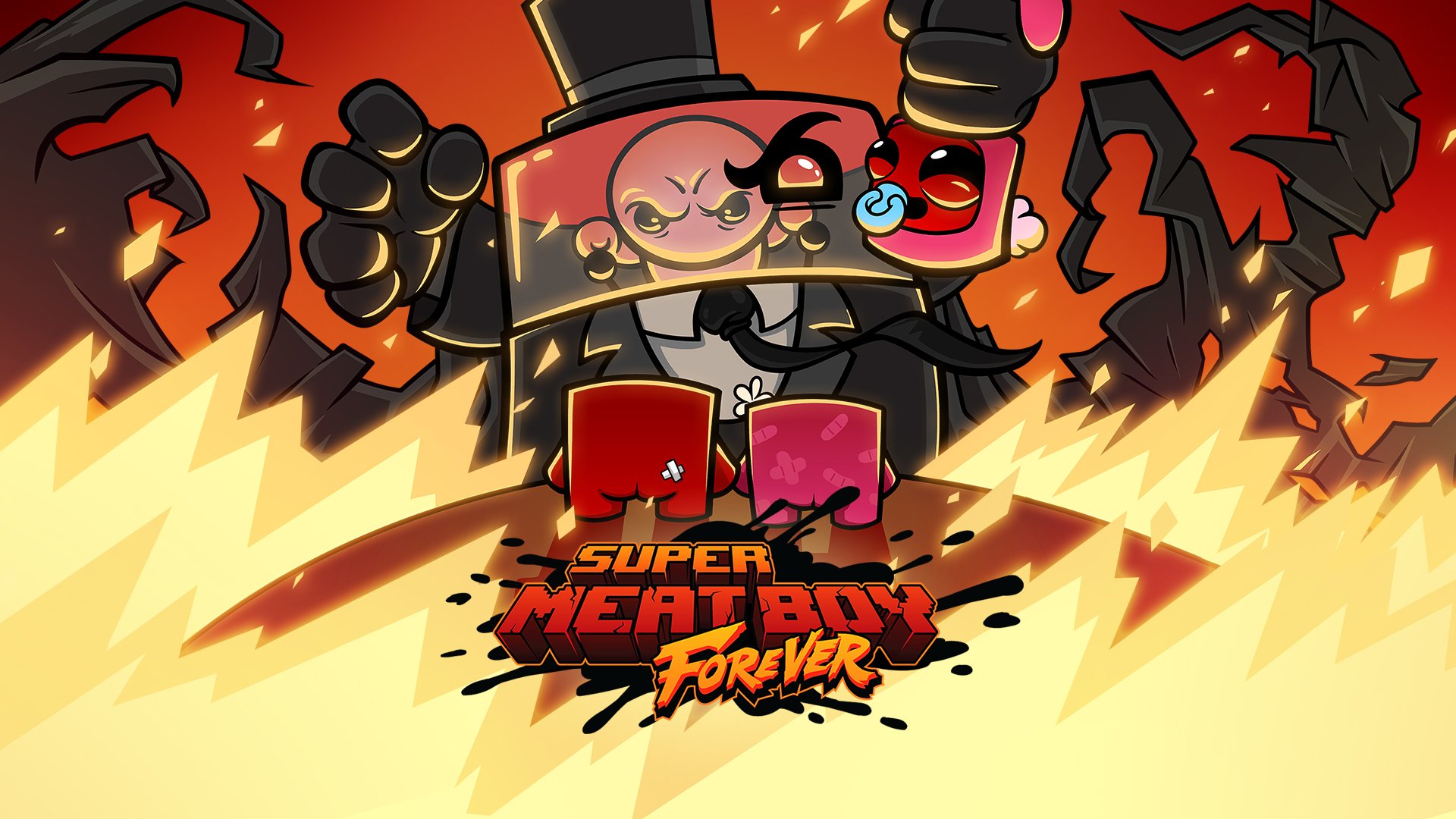 When Super Meat Boy was first released in 2010 on the Xbox Live Arcade, the indie boom began. Edmund McMillen and Tommy Refenes recreated their tough-as-nails platforming flash game into a masterpiece under the name of Team Meat. Its incredibly impressive strike at the industry after a troubled development with Microsoft was an inspiration to developers as thousands of individuals across the globe began to feel as if their ambitious projects could make a strong debut on big-name consoles and PC store platforms too. Four years later, however, the mastermind partners living far from each other focused their efforts on a sequel that would end up taking another 6 winters to complete after Refenes eventually went solo on the project when McMillen jumped ship. As to be expected after so much development time, fine-tuning, and fan feedback from conventions, Super Meat Boy Forever is a great indie title bursting with passion as it attempts to fit into its predecessor’s seams. Perhaps it is not the sequel fans of the original may be expecting, but nonetheless, it is still a notable entry that continues the muscular nourishment’s adventures.

Super Meat Boy Forever is the same slab of meat cooked to a different degree.

Saying Super Meat Boy Forever differentiates itself from its iconic predecessor would be an understatement. While the retro art style has been adapted to replicate the cartoon-inspired cutscenes, familiar locations return in reimagined spaces, and obstacles are overall the same, that is for the most part what the two only have in common. The largest difference between Super Meat Boy and its sequel is that Forever adopts the gameplay quirks of auto-runners. Forever still stays keen on that razor tight platforming and buttery smooth controls players would expect from the first entry, however, it is utilized in an entirely different way. Super Meat Boy Forever does not give players complete control. As Meat Boy and Bandage Girl, you will always be moving right unless you bounce off a wall- but even then, if you manage to make it to the left side of the screen, you will end up toast. The only direction here is forward, yet this can sometimes come off as a backward step for the series.

Being an auto-runner can negatively affect gameplay when it comes to player creativity. Not having that same amount of control as its predecessor means that Meat Boy’s moveset might be larger, but it can all feel limited. Some of the crazy parkour tricks players could find in the original title within each level are absent here due to the game’s structure. Players are practically stuck to a track. The original’s sense of freedom to overcome obstacles has not been completely eliminated per se, but due to limited creativity on procedurally generated levels, some of those magic moments you can find in the first title by enough experimentation are nowhere to be found. Speaking of, unlike its predecessor, levels are not concrete challenges. Team Meat has created 7200 unique chunks that are randomly stitched together while you are playing to create levels. Each level may embody similar challenges and roadblocks, but the outcome of every layout will alter with each player. This not only makes for a more personalized experience but adds significant replayability.

Despite the flaws due to a change in its base architecture, Super Meat Boy Forever is still a damn good two-dimensional platformer packed with challenge and charm. The negative aspects brought out by its changes never hamper the suspenseful action always at hand. Outside of the fact that random difficulty spikes can occur because of the procedural generation, each area you encounter is articulated well enough to always be thrilling yet never unfair. Just like the first game, players will have to go through immense trial and error to eventually overcome their path. The precise split-second decisions to victory are still as satisfying as ever. Every time a player completes a level they will want to wipe their forehead and take a breather before diving headfirst into more. On top of the many secrets to uncover within its world and the comical animated cutscenes to indulge in, Super Meat Boy Forever is constantly ensuring that players are well rewarded for their time.

As for the game’s hidden levels, there are the returning Dark Worlds to explore and plenty of characters to unlock, but one of Super Meat Boy Forever’s highlights are the new Cursed Warp Zones. Rather than having a bunch of spare platforming challenges through these new hidden dimensional portals, players get to experience a handful of references to classic 8-bit and 16-bit titles including Mortal Kombat, Punch-Out!!, and Mega Man. The secret levels are never too difficult- players likely won’t fail these on their first try- but they are an absolute blast to play through. Cursed Warp Zones add an odd spice of variety to the game’s total playtime, but due to their mysterious placements and sparse number, they are likely something that many players will unknowingly skip over unless they happen to encounter one inside the procedurally generated levels that can make them more difficult to uncover.

By far Super Meat Boy Forever’s most charming aspect has to be its animated cutscenes and characters. If there’s one area where the sequel undoubtedly has the upper hand over its predecessor, it has to be its approach to storytelling and the way it utilizes its cast. While the story may stick to a premise reminiscent of a Saturday morning cartoon- Meat Boy and Bandage Girl’s child Nugget gets captured by Dr. Fetus- its overarching narrative is filled with heart and laughter that you simply would not expect to find in the title upon booting it up. Between the main plot at hand and a substory featuring a nature rebellion with a leading Squirrel who clearly takes a stab at Metal Gear Solid’s Big Boss, the overarching narrative has no right being as hysterical as it is. The short bursts of cutscenes bookending each world and boss fight are an immensely satisfying reward well-worth your effort even if they last for only a minute or two at a time. Super Meat Boy Forever contains almost a half-hour of cutscenes that you seriously can not miss.

After six years in the making, Meat Boy and Bandage Girl make a notable return to the indie spotlight they once directed.

Super Meat Boy Forever is another great title from Team Meat, albeit one that will never make the same impact as its predecessor. It is not by any means as perfect or successful as its predecessor in fine-tuning its gameplay structure and subgenre, but it sets itself apart from the average sequel as it attempts to re-innovate Meat Boy, Bandage Girl, Dr. Fetus, and the rest of the cast by utilizing a new course of action. Purists who love the original entry may have a hard time grasping its reimagined auto-runner style and checkpoint system that can culminate into a rather handholding experience, but it still manages to attain many of its quirks that fans of Super Meat Boy adore while staying focused on creating something new. If you want more hair-tearing insane action from the same slab of meat you once loved to murderously chow down on, Super Meat Boy Forever may retain a slightly different taste, yet it will damn sure fill your appetite with its delicious slew of meticulous madness.