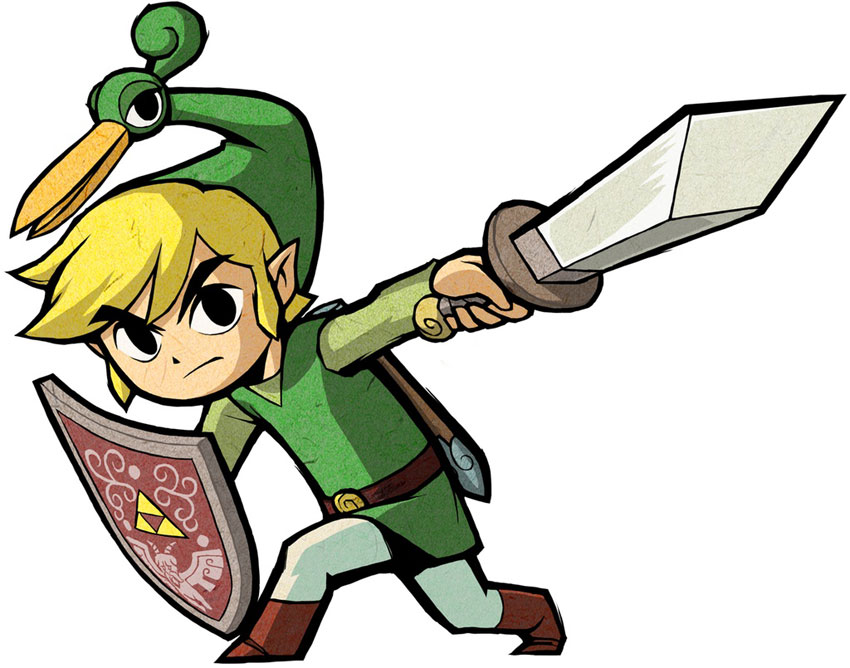 The Zelda titles are an interesting bunch. Most of them came out roughly around the time a new console launched, or when Nintendo was seeking to explore a new way to tackle a genre. The first two NES games set the series ground work by being so different from each other. A Link to the Past expanded upon the mechanics of the first game, while also taking advantage of the improved SNES hardware. Link’s Awakening not only brought the series to handhelds, but also explored how to integrate jumping into a series that lacked a viewpoint for it (at least outside of Zelda II). The Oracle games expanded on Link’s arsenal of items, which in turn had an effect on how puzzles were solved. Ocarina of Time brought the series into 3D, and Majora’s Mask was a polished version of the concepts Ocarina introduced. Wind Waker, much like A Link to the Past, took advantage of the hardware it was on to push boundaries the series had not seen before. The game that comes after it though, The Minish Cap, is one of the few instances of a Zelda game that borrowed more than it progressed.

Link’s arsenal for The Minish Cap is largely unchanged when compared to previous games, but there are a few new additions. The Gust Jar is probably the defining piece of equipment in The Minish Cap. It brings the most new ideas to the table and it shows up the most as a puzzle solving tool. By using the Gust Jar like a vacuum, Link could pull elastic-like mushrooms from opposite sides of a room to help him cross gaps in the floor. The Gust Jar could also be used like a pseudo-sail to give Link a burst of propulsion on a lily pad. It makes sense for the Gust Jar to be one of the most used items in the game, since it’s the first item Link discovers on his quest to repair the Four Sword. The two other items, the Cane of Pacci and the Mole Mitts, are also well explored, but not nearly as memorable. They are the next two respective dungeon items, and said dungeons take full effect in making them usable for almost every puzzle they have. The problem is that these items serve little use outside of utility, while the Gust Jar can be used as a both a combat and puzzle tool. The Cane of Pacci is a tool used for flipping things over, used primarily in it dungeon to flip spiked tiles over to a flatter side, as well turn certain pitfalls into super jump pad.

The Mole Mitts serve the least important function in the game by far, as they are just another form of the series’ shovel. Having little to no combat use, the only time the Mole Mitts become a requirement is in the last couple of dungeons for very similar and very tedious puzzles. This item lack of item use leads to the game’s biggest issue though: its pacing.

The dungeons in The Minish Cap, of which there are six, are rather short. Most dungeons rely solely on the item you found in them for the majority of their puzzles, making everything feel the same. With items like the Mole Mitts this becomes readily apparent due to their lack of function. While the first half of the third dungeon is pretty well laid out and interesting, the final half is nothing but a bunch of dirt mazes that rely on you to spam the button you have the Mitts equipped to.

If there is one overall weak point for the game, it would be its repetitive nature, and the place where this is the most obvious is in Link’s Minish form. Aptly named, Link is able to shrink down to the size of a Minish, a small race of creatures, thanks to the help of his talking hat, Ezlo. While being Minish-size opens up a whole world for Link to explore, what it brings with it is mostly barriers of things that a properly-sized Link is too big to get over. It’s a back-and-forth of seeing interesting implementation, such as in the third dungeon boss battle, and seeing annoying barriers where your size is the only thing preventing you from moving forward. Hyrule becomes a second dungeon of sorts, expanding as you add new items to your inventory and expanding the places you can explore as a Minish.

If there’s one thing the development team took full advantage of, it would be the Game Boy Advance’s graphical capabilities. There’s a myriad of individually detailed sprites that pull inspiration from games all across the hardware generational spectrum. Characters from Ocarina of Time, Wind Waker, the Oracle games, and even a few new faces interact with each other throughout the land of Hyrule, creating a game that is visually memorable.

The Minish Cap boasts one of the most interactive, vibrant, and memorable worlds out of any Zelda title. It easily has one of the largest amounts of unique NPCs in a Zelda title, and also encourages the player to interact with everyone. This familiarity is brought about through kinstones, The Minish Cap‘s version of the trading sequence, except that rather than swapping a series of items for something like a powerful sword or other weapon, you unlock hidden secrets. Kinstones work by combining Link’s half of a stone with an NPC’s matching one, unlocking things like Rupees, pieces of heart, special gear upgrades, or even more kinstone pieces to use elsewhere. The process is quick and feels rewarding, marking the location of your newly found kinstone reward on your map to go find. While the main game is shorter than other Zelda titles, its expansive amount of side material through kinstones makes up for a lot of the time difference. The Minish Cap probably has one of the shortest main stories out of any Zelda title since Majora’s Mask, but unlike Majora’s, it doesn’t have enough supplementary side quests to pad out the lacking dungeon length. Instead, the game falls back on its kinstone system, along with a few mini-games and a figure collecting quest, to try and make up for its shorter main quest. Eventually the tedium of kinstones catches up with you and you realize you’re just moving back and forth across the map to get minor rewards like Rupees or shells (currency for the figure collecting quest).

The Minish Cap is a great example of what a Zelda game that breaks away from the series long-running development formula, where each game highlights or tries to take advantage of hardware in a way that focuses on gameplay. Its strengths are in its aesthetics. Its graphics, unique NPCs, and soundtrack shape the game more than its puzzles or dungeons. While certainly not one of the best games in series, The Minish Cap is by no means a bad entry, and serves as a testament to the quality Zelda titles bring to Nintendo’s library of games be it through gameplay or game feel.