When stacked up against a ruthlessly efficient robot, what is a human employee or gamer really good for? 7 Billion Humans, Tomorrow Corporation’s follow-up to 2015’s Human Resource Machine, their fiendishly clever take on the office workplace, doesn’t see much of a future for those who are unable to issue the commands necessary for directing labor to perform menial tasks like sorting data or shredding waste. Either you’re devious management or clueless minion; there’s nothing in between here, so you better have some previous experience on that résumé. Unfortunately, that may leave more casual puzzle solvers without a job to do, useless to a game that unlike its predecessor, lacks true entry-level positions.

The concept in 7 Billion Humans is essentially the same as its predecessor’s, only instead of one worker allotted to complete the various assignments, the player this time will be overseeing a multitude of mindless employees in a basic simulation of coding. Instead of direct control over these drones, players will dictate actions via a series of commands that essentially programs them to accomplish whatever goal is set forth. Much like in Human Resource Machine, these goals often involve sorting, such as having personnel each arrange a column of data cubes from the highest number to the lowest, or fill a room with a checkerboard pattern. 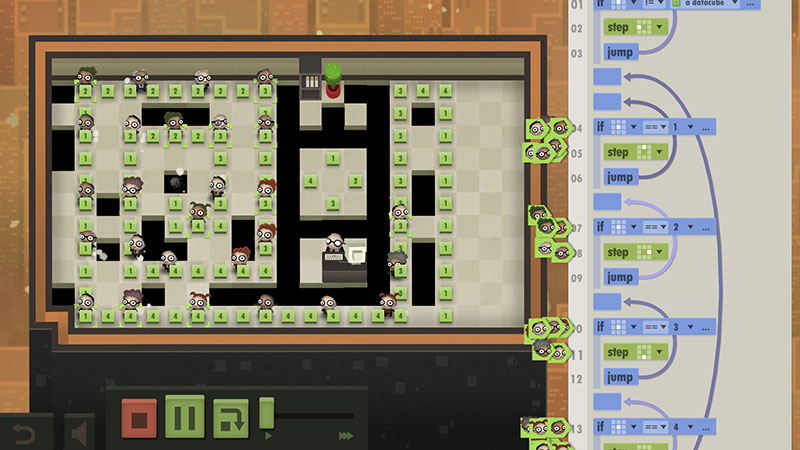 The language is what really separates the two games, as 7 Billion Humans asks players to think in big picture logic terms, how one weak link affects the whole chain, as opposed to focusing on the weaknesses of a solitary unit. There are multi-directional movement commands, if-thens, the ability to store memory, and a variety of other tools with which to steer the swarm to recognize objects, discern/calculate data, and ultimately perform the operation at hand. Players are given the opportunity to test their potential solutions, then rework them to deal with any bugs. Just because a solution works for a particular set of circumstances doesn’t mean it’s feasible on a larger scale, however, so the game runs each program through twenty-five simulations to make sure it holds up. If the goal isn’t met in all test cases, your boss will show you an example of a scenario where it went wrong, and it’s back to work.

Early puzzles don’t require more than a few of these directives, but for later stages the command list can turn into a tangled mess of jump loops and conditions. Touch controls allow for easy drag-and-drop or removal of commands with the swipe of a finger, (the game can also be played with the motion controls of the joy-cons), so it’s just a matter of working the problem until it’s solved. There are also optional challenges on each level for efficiency and expediency.

Those familiar with coding will likely catch on quick and graduate from the mail room with ease, moving up floors to tougher assignments, but even players who managed to complete Human Resource Machine may have trouble understanding the new language Tomorrow wants them to learn in order to multitask. While there are stages designed to introduce new commands, there are such a larger range of possibilities now that one just doesn’t feel like it’s enough. At times, 7 Billion Humans seems like it’s teaching a caveman about the wheel, then asking them to invent the steam engine. Halfway through, I still had problems understanding the range of uses certain commands offered. 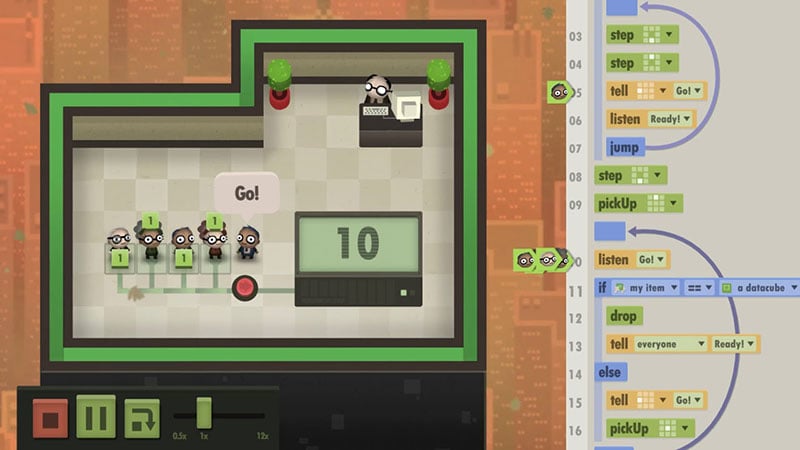 Hints are also hit-and-miss, sometimes just relaying concepts already understood, sometimes no use at all (asking for help on one stage even elicited a response that the objective was pretty straightforward — no hint necessary!). Players have the option to skip stages, but what’s the point when you know the next one will be even harder? Experimentation is a key element of puzzle games, but so is fully understanding one’s abilities, and employee orientation is one area where 7 Billion Humans comes up a bit short, which might be frustrating to rookies (and even HRM veterans).

The visuals seem to have also received a downgrade. Tomorrow Corporation has pulled the surveillance camera back quite a bit (probably under the guise of employee safety, but we know better), resulting in a larger workspace that now feels smaller. Yes, management looks down from on high, but this greater distance makes it harder to see details in a game that requires attention to detail, especially when playing in the Switch’s tablet mode (the best way to play, due to the touch controls). The charm of HRM‘s cold-but-cozy offices is lost in a wallpaper-like city backdrop. Still, workers have wonderfully drab designs, with baggy eyes and weary smiles that suggest maybe company morale could be better, and cut-scenes are still fun and stylish, especially if you adore the world the developers have created in past titles (I do).

Tomorrow Corporation’s signature droll humor is also on full display; management is gleefully condescending when introducing stages or issuing reprimands for failures, and each of the players’ many drones offer up various depressingly funny takes on office life when prompted. The intro pokes fun at “useless” college degrees, and coffee breaks take on corporate culture; the dialogue alone is enough to motivate TC fans to plow through the 60+ levels, even if the puzzle solving alone isn’t quite as satisfying as a non-robot might want.

There will likely be plenty of Human Resource Machine fans who fall in love with 7 Billion Humans, and work diligently to optimize their programs. Still, puzzle solvers who aren’t versed in these concepts may be faced with tougher roadblocks then their colleagues when trying to ascend the corporate ladder. Job hopping over to 7 Billion Humans isn’t a bad career move, but at best it feels like a sideways one.