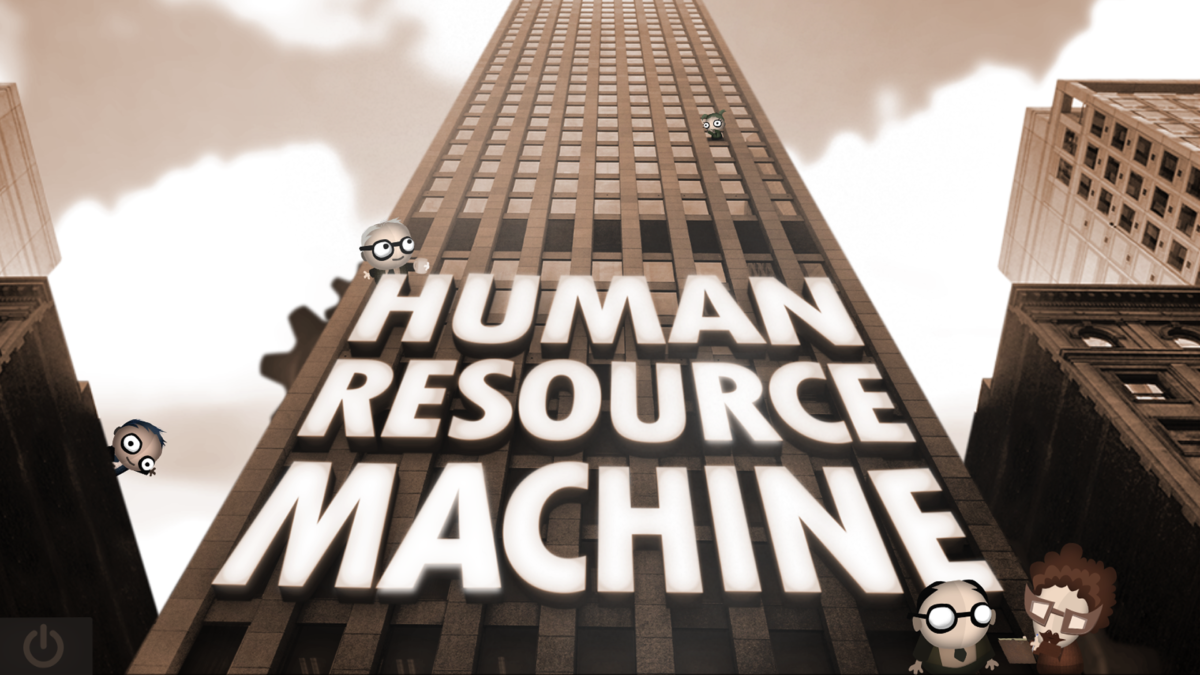 Receive assignment, obey command, perform task. Repeat on loop until job complete. Coffee break. Receive new assignment and begin process anew. Do this for eight hours and a paycheck, and they call it employment – at least until the robots take over. Or have they already? In Tomorrow Corporation’s downloadable Human Resource Machine, the player cares not about these things. All that is important is solving puzzles by issuing a series of instructions to an automated worker whose performance results will hopefully make the boss happy enough to keep him or her on for another year. This is what life is all about.

Luckily, solving puzzles is fun, even if they’re work-related! Treating the office like a computer and using a conveyor belt representing an “Inbox” to deliver a series of boxes designated with numbers and/or letters, Human Resource Machine tasks the player with simply escorting those boxes to another conveyor belt, the “Outbox,” in whatever order or combinations the higher-ups demand. This might be something relatively simple, like putting this data in reverse value order from highest to lowest, or it could involve weeding out duplicate characters or multiplications. By programming a sequence for your compliant avatar to follow, constructed of the meager amount of commands available, the job will get done and you’ll move up the corporate ladder, promoted to the next floor of the towering company’s headquarters.

The puzzles in Human Resource Machine are algorithm-based, something those with programming knowledge may have a better grasp on than others, but in a sense most puzzle games are predicated upon finding the right sequence of inputs, and to that end the calculative aspects shouldn’t intimidate anyone who enjoys a good brainteaser. The developers have also done a good job of easing the player into what may seem like unfamiliar concepts, starting them out in the mail room and supplying only two drag-and-drop commands to initiate them into this world. As proficiency grows, the difficulty levels steadily rise and more complex options become available. Experimentation is key to understanding what each command is capable of, and looking at a problem from all sides is a must if you want to reach the upper echelon of the company.

Games of this type usually have the ability to elicit slight satisfaction or slight frustration based on how well they’re constructed, but never before have I hit the extreme highs and lows that pursuing solutions in Human Resource Machine brought about. I love when I’m encouraged to think outside my own box, and for someone who has never written a line of code in his life, Machine definitely does that. After solving the later stages especially, which become tangled webs of loops and commands, I felt like a programming wizard whose genius could not be stopped, only seconds after being dejected by an inability that surely seemed to prove my idiocy. The eventual challenge may turn some off, but rarely have I felt this rewarded upon completion, and that made me resist the temptation to resort to help. However, with extra “optimization” objectives available for each task, involving the number of commands issued (program size) or steps taken (execution speed), seeing how others tackle these multi-solution puzzles becomes an interesting lesson in efficiency and logistical creativity, and seeking out different solutions when going back for replays is worth your while.

As far as the presentation, Tomorrow Corporation does a great job of creating atmosphere in everything they do, and here is no different. From the constant hum of machinery, to the muted tones of grey doom and gloom, to the pale, vampiric skin and baggy-eyed cheerfulness of the employees, this will not inspire kids (or anyone else) to spend their life at that office job. Taking place in a single room with a window that offers only a view of the incessant rain outside, your depressing career is overseen by cheerily cynical management. Offering the kind of encouragement that has as much value as a motivational poster, these supervisors dictate the tasks at hand from behind a desk filled with stacks of paperwork. As the game progresses over years of loyal service, little touches like characters’ greying, thinning hair are sprinkled throughout as well, giving the game that “you’ve wasted your life” feel. The “story,” which is furthered occasionally by short cut scenes, is typically sparse, but not quite as absorbing as the developer’s other efforts; there isn’t the haunting sadness of Little Inferno or the fairy tale melancholy whimsy of World of Goo. Instead, Human Resource Machine comes off as cold, emotionless, a bit detached from humanity. But hey, that’s business, kids.

Okay, break’s over; get back to work. Get those boxes sorted on time and under budget. Productivity is more important than anything else, so keep it up. After all, you are only a cog in the company and easily replaced, so you better watch your back, because as Human Resource Machine warns, “the machines are coming…for your job.” Enjoy the severance.