Technology has evolved dramatically in the last twenty-five years, allowing for advancements at faster rates than many could have ever dreamed of. On occasion, this progression has triggered questions about the boundaries of morality in the scientific world. While devices like smartphones are now essential in our daily lives, our society is still fully human. Though their influence on our society cannot be understated, these improvements in personal technology have not reached a point where they control major sectors of human life.

However, jump ahead 47 years and the world will tell you a much different story. Robots called ROMs (Relationship and Organizational Managers) serve humanity, performing tasks ranging from aiding the police force to serving frozen yogurt in the middle of Golden Gate Park. Despite society’s newfound reliance on these machines, software limitations prevent them from attaining a human consciousness.

2064: Read Only Memories tells the story of a freelance journalist struggling to make a living in Neo-San Francisco, whose quiet existence is turned on its head by one young ROM.

On a quiet night in the days before Christmas 2064 AD, you awaken to find Turing, the world’s first fully sentient robot, in your apartment. Distressed by the kidnapping of his creator Hayden, an old friend of yours, Turing used their processing power to deduce who would be the most able candidate to aid them in finding the man who brought them to life: you.

An update to the KickStarter game ROM: Read Only Memories, released on Mac, Linux and PC in 2015, 2064: Read Only Memories incorporates a myriad of new features into the original game, including but not limited to voice acting, enriched storylines, and enhanced puzzles.

Becoming Emotionally Attached to a Robot

At a glance, the mystery at the center of 2064 may seem simple. However, your search for the truth regarding Hayden’s fate seems to unearth more questions than answers. How did Hayden succeed in creating Turing, a technological marvel? Was his kidnapping connected to his position as an esteemed computer scientist at a powerful tech company? Could an anti-technology advocate have discovered Turing’s existence and targeted Hayden as a threat?

In following these rabbit trails, you and your eccentric robotic companion encounter a cast of extraordinary, multidimensional characters. Dialogue options allow you to decide whether these personalities will become your friend or foe, allowing for a variety of endings and story paths. 2064 ‘s cast is full of notable names, including Melissa Hutchison (known for playing “Clementine” in The Walking Dead) and Austin Creed, who add incredible depth and weight to every line of conversation. No matter how you choose to interact with them on this journey, each character leaves an impression that is difficult to forget.

Untangling and understanding their motivations became just as meaningful as solving the central mystery. There are few games where I have connected with each character with such emotional intensity. Even Turing, an innocent ROM, had me on the verge of tears at points along our journey.

MidBoss gave the breath of life to every individual that entered a scene, weaving their stories into one unforgettable tale.

A Master Class in Environment Building

Due to the game’s genre riding the line between a point-and-click adventure and a visual novel, the vast majority of the gameplay lies in exploring and utilizing your environment. Fortunately, the world crafted by MidBoss is nothing short of phenomenal.

While the objects needed to advance the main storyline would do enough to populate the world, the amount of additional detail placed into each section of Neo-San Francisco is unmatched. You are able to look at, touch and talk to almost everything. Items gathered during your journey are also available for use. Each plant, empty glass and box of donuts can be engaged, and I cannot stress enough how rewarding it is for those that take the time to do so.

For every object open to your inspection, MidBoss has written a myriad of delightful, often humorous responses. Whether Turing is encouraging you to speak to your plant Wilty more often (to encourage its growth!), or a macho Neo-San Franciscan is losing his temper over your attempt at a hug, MidBoss has accounted for it. The care taken to craft an immersive world through these interactions is astounding, and takes the overall experience to the next level.

The game has a sprinkling of puzzle elements throughout that give a break in the story, although all are tied to advancing your quest to find Hayden. No two are alike, and most are enjoyable, yet I found some to be unnecessarily tedious while others were entirely unrelated to any other part of the game. In these cases, the puzzles just felt like needless distractions and grew frustrating quickly. They were not disruptive enough to significantly hurt the overall experience, but were by far the weakest element of the game.

While there is plenty to praise, 2064: Read Only Memories still has some issues to be ironed out. These can somewhat be attributed to the game’s save system, which lacks an auto-save feature. On two occasions, the game crashed as I examined objects in the environment. I was safe the first time this occurred, but not so much during the second incident.

Although the responsibility does lie on the player to save frequently, crashes like this always present a potential issue to players, especially when they have to remember to save manually. It was only a minor annoyance in my case, as I only lost a small portion of my progress, but it could easily have been much worse for someone less careful. 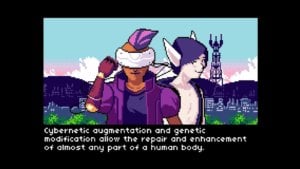 Although it exists nearly fifty years in the future, the complex social issues that own headlines today still exist in Neo-San Francisco, albeit in slightly different forms. Hybrids (humans who have undergone gene therapy) are fighting to maintain their basic rights, determined to prove their humanity to those who doubt it. Movements like the “Human Revolution” spearhead the efforts to strip these hybrids of any sort of human rights, holding protests outside of clinics and convincing businesses to deny service to anyone with a genetic modification.
The echoes of past and present that ring throughout this story are powerful, striking to the core. As our own society fights to give a voice to the oppressed and the disadvantaged, so do the Neo-San Franciscans. 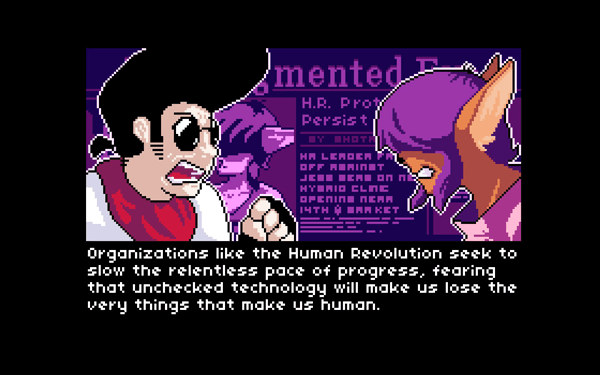 This social commentary was incredibly powerful, but also incredibly necessary. Because the game is rooted in a future with a populace that is much more comfortable with technological terminology, scientific jargon can dominate some conversations. While it’s not overwhelming, it might be difficult to understand for someone not familiar with the world of IP addresses and system patches. At times, this was slightly frustrating and left me struggling to hold on to what was going on. This could frustrate some players, taking away from the game’s otherwise brilliant script.

A Lesson in Inclusion

Despite the chaos within the society of Neo-San Francisco, the world has not been without progress. Questions about an individual’s gender come up in conversation on multiple occasions, though never in a pejorative way. My first encounter with this occurred when Turing asked which pronouns I preferred for use in conversation.
Initially, I thought this was just a clever way to tell the system whether my character was a male or female. I was pleasantly surprised to find that “they/them/theirs” was one of the available options on the next prompt. Additionally, players are able to input custom pronouns if none of the available options are appropriate. 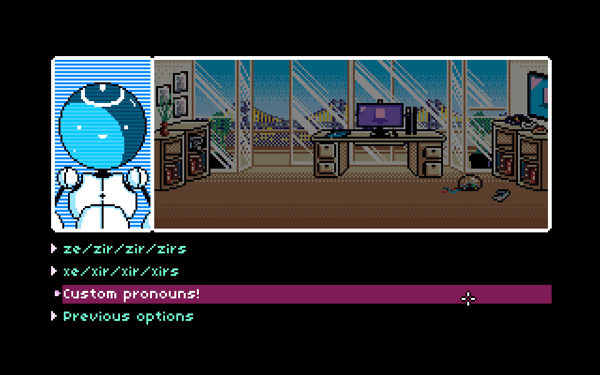 Later, Turing expresses confusion over their own gender, admitting that the concept seems abstract to them. Although it is difficult for Turing to say, they finally come to terms with the idea that they have no gender that they relate to.

While it was somewhat insignificant to the plot as a whole, the fact that a game tackled the struggles of gender fluidity or lack of gender—and illustrated them so beautifully—was incredibly moving. MidBoss did not force it into a plot point, but let Turing’s personality shine through instead. By taking this approach to Turing’s gender identity, the message comes through that how we choose to identify should not be a point of conflict. Rather, someone’s acceptance of themselves should be celebrated.

2064: Read Only Memories tells an amazing story set in a world that players can easily lose themselves in. Conflicts regarding societal norms and human rights are all too relatable, while the cyberpunk nature of the world (when not overwhelming) adds an intriguing spin. The bonds formed between me and the characters are stronger than any I’ve experienced in years. For these achievements alone, MidBoss should be incredibly proud.

There are areas that could be improved upon, but if you are willing to grit your way through a few underwhelming, somewhat annoying puzzles, the payoff is well worth it. The journey that Turing and I took together has stuck with me since I completed the game, and is likely to stay for the foreseeable future.