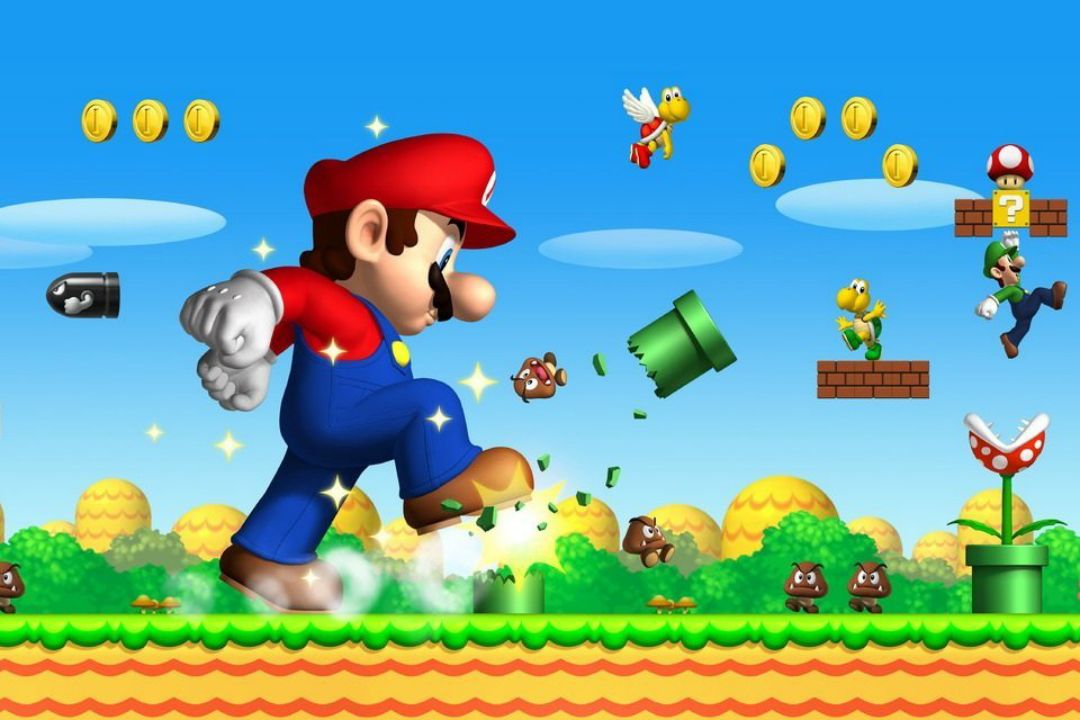 New Super Mario Bros. was quite the novelty back in 2006. It was the first 2D platforming title in the Mario series to be released since 1995’s Super Mario World 2: Yoshi’s Island, a sort of swan song for its genre before gaming as a whole transitioned into the third dimension. That is a gap of over a decade, but fans of the traditional 2D Mario formula had to wait even longer, as 1992’s Super Mario Land 2: 6 Golden Coins was the last installment to utilize that format at the time. For this reason, New Super Mario Bros. felt like a big deal; it took a gameplay blueprint that had shaped gaming for decades to come and tastefully adapted it for a modern audience.

The game would go on to become a massive hit, which encouraged Nintendo to make an entire subseries based on this title. Over the years, however, this series of games would be seen in an increasingly negative light by fans, which mostly stemmed from a lack of originality and heavy asset reuse, particularly from New Super Mario Bros. 2 onward. But if anything, these issues with the sequels only make the original New Super Mario Bros. look better in hindsight. Many of its assets were left untouched by the later installments, which means that the game has a number of clever ideas that are entirely unique to it. New Super Mario Bros. may not be the best Mario game, especially since later entries have massively refined and perfected what this title started, but it’s still worth playing and thinking about 15 years after its release.

Of all the updates that New Super Mario Bros. brings to the table, the changes made to Mario’s moveset are perhaps the most immediately impactful. In prior 2D installments, Mario was mostly limited to running and jumping, with extraneous actions largely being relegated to powerups. New Super Mario Bros., on the other hand, takes a page from the 3D entries to add some welcome moves to Mario’s arsenal. Although the ground pound is mostly associated with the 3D titles, it was actually introduced in Yoshi’s Island, so it’s only natural that a more traditional 2D game would adopt this technique. It’s a more than worthy inclusion, allowing for quick descents and an extra degree of heft to Mario’s jumping attacks. The game even decreases the leadup animation that occurs before the ground pound initiates, which makes it snappier and more enjoyable to use.

The wall jump is even better; it works so naturally in a 2D environment that it almost feels wrong to play a modern 2D Mario title without it. Not only does it massively expand the potential of the platforming mechanics, but it can also provide a last-ditch save for players falling toward a pit, which makes the game more forgiving for newcomers without being completely exploitable. Areas like an optional room in World 2’s tower, which sees Mario repeatedly jumping between two walls that transport him toward the exit, are novel applications of the technique that were simply not possible in the older games. Even the triple jump makes an appearance; it’s not as powerful as it was in the 3D installments, but it serves as a wonderful reward for timing jumps while maintaining speed. These moves do not necessarily bring Mario’s moveset to the level of versatility and complexity seen in the 3D titles, but they do not need to, as they succeed in improving the general flow of 2D Mario in all the right ways.

Equally as interesting as the new moves are the new powerups, which mark a shift in focus compared to past games. Powerups in previous 2D installments were straight upgrades through-and-through, but New Super Mario Bros.’s selection of powerups feature at least one downside that offsets their potent aspects. The Mega Mushroon, the game’s flagship powerup, grants players the ultimate power fantasy in the form of plowing through stages with wild abandon, but it can also accidentally destroy pipes that lead to vital secret areas, and certain segments become downright inaccessible while its active. Similarly, the Mini Mushroom allows players to enter small passageways, run on water, and practically glide through the air, but it also renders Mario vulnerable to dying in a single hit, and ground pounds become necessary to defeat most enemies. These limitations end up serving the gameplay well, as they really encourage players to weigh their options and decide which powerups may be best for certain situations.

The Blue Shell is easily the best of the new powerups; it grants Mario protection from enemy attacks and allows him to barrel through enemies and break blocks by dashing, but since he automatically bounces off walls during a dash, he becomes more difficult to control. The image of a Koopa Shell speeding across the ground and ricocheting off of walls is incredibly iconic, so including a powerup based on the concept feels like a no-brainer. It is somewhat baffling that the Blue Shell has never made a reappearance in any of the main Mario installments, but this can also be seen as a positive, as it helps give New Super Mario Bros. a unique appeal that future titles cannot quite match. All of the new powerups are worthy additions, though, and none of them overcentralize the game like the flying powerups of past Mario titles often did.

Standing On the Shoulders of Giants

If there is one area of New Super Mario Bros. that can come off as a bit pedestrian by today’s standards, it would be the level design. The game’s levels utilize the traditional Mario design template of safely introducing a new mechanic and building upon it over the stage’s duration. It’s a design formula that absolutely works, but New Super Mario Bros. does not strive for much more than this. The stages tend to lack the multitiered design seen in games like Super Mario World, and although some stages do feature alternate exits, they do not influence the game nearly as much as they did in World. The levels never explore their concepts as much as they could have, which contributes to an overall low level of challenge across the game. Even the world maps are a step back from prior entries. The map screens are all straightforward left-to-right affairs, and the branching paths that do exist never lead to impactful discoveries like the Star World in Super Mario World or the “III”-shaped oasis in Super Mario Bros. 3. Fans of those titles may be disappointed by this game’s offerings, and considering how far Nintendo has pushed 2D Mario since this title, it may be hard to go back to New Super Mario Bros.’s relatively humble campaign for some.

Despite how negative this sounds, the levels are certainly not lacking in inspiration. Since New Super Mario Bros.’s 3D modeling and dynamic sprite work surpasses the tile-based sprites of games past, the title is able to experiment with all kinds of new gameplay possibilities. Mushroom stalks can dance and sway or bend to Mario’s weight, granting a fun degree of dynamism to certain platforming sections. Pressing switches can cause what was once a flat, sandy path to stretch upward or downward, granting access to new areas or affecting the physics of rolling spiked balls. One stage sees Mario riding a giant Wiggler, its segments bouncing up and down as he tries to dodge oncoming hazards and enemies. A particularly memorable mechanic comes in the form of tightropes that naturally stretch as Mario precariously walks across them, leading to tense situations as players nimbly jump across tightropes suspended over lava. Moments like these really help the game feel like more than just a retread of Mario’s greatest hits, and they make the world feel that little bit more alive.

Some of New Super Mario Bros.’s ideas really stand out when compared to future games within its subseries. Those later games have used almost the exact same soundtrack since New Super Mario Bros. Wii, but the original’s tunes have thankfully never been overexposed in the same way, and they have a charming, bit-crushed quality to them that suits the game’s small scale. The castle theme in particular sounds genuinely foreboding, and it serves as the perfect build-up to each boss battle. Speaking of bosses, while nothing outstanding, the unique boss encounters found at the end of each world come off as a breath of fresh air compared to the constant Koopaling bouts of the later installments.

In fact, this approach leads to one of the title’s best ideas. At the end of the first world, the player comes face-to-face with Bowser for the first time, and the setup is almost exactly as it was in the original Super Mario Bros. Mario sends Bowser into the lava as usual, but in a surprising twist, Bowser resurfaces with his flesh melted off, revealing his hollow bones underneath. This is a genuinely shocking moment, and it pays off later in the game when Mario has to square off against Bowser’s reanimated bones. In New Super Mario Bros. 2, Bowser’s skeletal form reappears as an optional, palette-swapped final boss battle, but the original game’s use of the idea was far, far better. On top of being a surprisingly grisly image for a family-friendly game, the conclusion of the first Bowser battle adds a small layer of tension to the game as players wonder what will happen once they encounter him again, or even if they encounter him at all.

New Super Mario Bros. is a game that could have easily ended up as a forgettable footnote. Games made to capitalize on nostalgia can often lose sight of what made the original titles special or fail to have their own voice, and both can unfortunately be said about some of the later New Super Mario Bros. games. It is debatable how well New Super Mario Bros. captures the spirit of its predecessors, but it absolutely has a voice. And 15 years later, that voice is still well-worth hearing.