Sony’s jump on the bandwagon, the miniature-sized PlayStation Classic, will soon be upon us

While the plug-and-play version of the second-highest selling home console of all time is said to include 20 titles, Final Fantasy VII, Jumping Flash, Ridge Racer Type 4, Tekken 3, and Wild Arms are the only ones announced so far.

Given PS1’s gigantic 2500+ games library, there’s plenty to pick from, with a lot of obvious additions like Metal Gear Solid, Castlevania: Symphony of the Night and Resident Evil 2, as well as obvious exclusions like Ape Escape, considering that the PlayStation Classic’s controllers don’t have analog sticks.

But, the PS1 was also home to a lot of obscure oddities, hidden gems, and games fraught with licensing issues. Here are ten games (with no significance to their numeral placement) that you won’t be (pretty likely) seeing on the PlayStation Classic 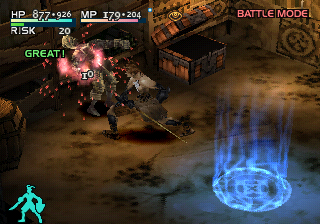 Possibly one of the best games ever released for the PS1, Vagrant Story’s inclusion on the PlayStation Classic is definitely possible, owing to its status as a popular cult classic.

However, this visually stunning, atmospheric, unique RPG (which is technically a part of the Final Fantasy franchise, tied into the same conceptual world of Ivalice that Final Fantasy XII and Final Fantasy Tactics take place in), never quite received the kind of mainstream recognition as a lot of its role-playing brethren. The PS1 had far too many popular titles, especially when it came to RPGs, for Vagrant Story to take up a slot as one of PlayStation Classic’s 20 titles.

If you like PS1-era RPGs but have never tried Vagrant Story, I’d implore you to give it a shot. It’s well worth it. 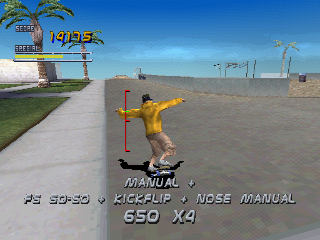 One of the highest selling franchises of all time, the Tony Hawk’s Pro Skater games ollied into our collective consciousness at just the right time. Tony Hawk’s Pro Skater 2 especially made the series a staple of its era, with over-the-top arcade high score action, intuitive combo controls and a killer, unforgettable alternative soundtrack featuring songs from Powerman 5000, Anthrax and Rage Against the Machine

But, it’s these licensed songs that put THPS2 in the “most likely not” category, though that didn’t stop a now-unavailable iOS port from replacing the track-list entirely. Changing its soundtrack for PlayStation Classic would be way too much work, and also kinda defeat the point of authenticity.

Unless, of course, all legal parties involved come to an agreement. If it happens, I’ll be happy to be wrong! 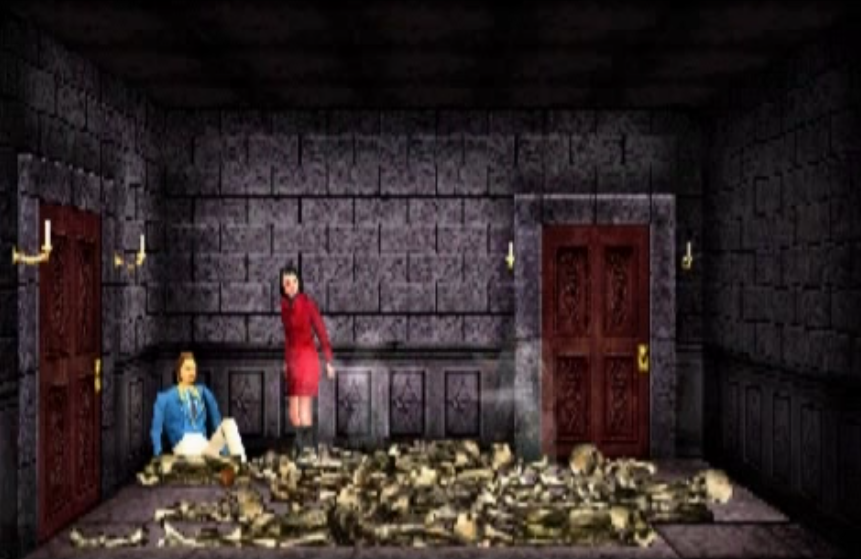 While officially the second title in the Clock Tower series, Clock Tower for PS1 dropped the “2” for the series debut outside of Japan.

A lesser known gem of the survival horror adventure genre popular in the 90s with games like Alone in the Dark, Clock Tower harkens back to the roots of the genre with psychological Japanese horror. It’s spooky, but also goofy, as is the bread and butter of all cheesy horror. It’s well worth a visit for connoisseurs of the genre.

Despite receiving a couple of sequels, these days the series has fallen far into obscurity, assumed dead. Still, NightCry, a spiritual successor by series creator Hifumi Kono, was released in 2016, with a supposed PS Vita release planned this year.

“No One Can Stop Mr. Domino!” (Image source)

If you ever wanted an endless runner-style puzzle platformer starring an anthropomorphic domino who may or may not be a relative of the Gingerbread Man, the 1998 oddity, No One Can Stop Mr. Domino!, has you well-covered.

Mr. Domino can’t stop running, and it’s up to you to guide him through stages that could only exist in a strange PS1-era Japanese game. With obtuse rules that aren’t readily obvious, and difficulty that is at times more annoying than fair, No One Can Stop Mr. Domino! isn’t exactly what I would call a well-designed game —but its bizarre concept, delightful low-poly visuals and awesomely chill OST makes it a memorable experience.

If you like Katamari Damacy, Mr. Domino! has a sense of style and ambiance that you’re definitely going to appreciate, even if the gameplay isn’t as fun.

Few games on the PS1 encapsulate a specific subculture’s thought process as Nightmare Creatures II does for fans of metal and horror. A stand-alone sequel, Nightmare Creatures II takes us on a gothic hack and slash quest, with aesthetics somewhere between a B-movie, counterfeit German Expressionism and Marilyn Manson’s “Dead to the World” tour.

While the game leaves a lot to be desired, owing to the fact that the game had a lot of content cut out and unfinished before release, it still manages to be a charming hidden classic, even if the charm wears really thin in some frustratingly broken parts of the game.

(For more on Nightmare Creatures II, check out my “Way Back Review” column talking about the game at length). 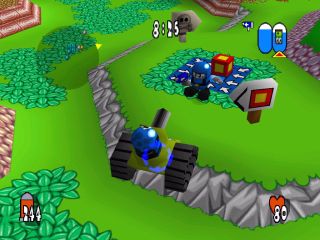 Team Buddies features crass humour in a frat boy kind of way (or at least the British equivalent of that stereotype), yet it has a charm to its presentation that is easy to get sucked into.

And while it hangs just above the abysmal trope of “characters that act annoyingly and all look the same” crap that we’ve unfortunately suffered through in recent times with things like Ubisoft’s Rabbids and Illumination’s Minions, its allegiance is actually closer to Worms or Lemmings (not too surprising, as developers Psygnosis published the very first Lemmings game, and developed a lot of entries in the series)

Team Buddies is part strategy, part party-game – and hard to explain it in a simple fashion. The objective is to blow up your opponent team’s main base, which can be done with the help of weapons and “buddies” built by stacking boxes on a special pad in specific ways. Playing with friends or a single-player story campaign, you can create guns, bazookas, tanks, motorcycles, unique team members and more.

In an ideal world, Team Buddies would’ve gotten recognition as a staple in the Bomberman-esque party game genre, though the game now has a bit of a cult following (and goes for insane prices on eBay, due to its limited release).

With a 90s art style and humor similar to Zombies Ate My Neighbors, Herc’s Adventures is like a tie-in game to a short-lived cartoon show or straight-to-video animated feature that never actually existed. It’s got this knock-off vibe to it that you just can’t put your finger on, but that feeling is more charming than disorienting.

Set in a sometimes-Greek, sometimes-Roman mythological world, you play as either Hercules, Atalanta or Jason, on a quest to defeat Hades and restore order to the world, since it’s kinda gone to shit since he kidnapped Persephone. Or something like that. It doesn’t matter, as long as it means you get to traverse the game’s open-world-ish map full of weirdos, fight monsters and eat gyros. You might need a walkthrough however since it’s not exactly fun to figure out where to go next when you get stuck — which you definitely will.

To my surprise, this relatively unknown title was released as a “PSOne Classic” for PS3, PSP, and Vita. I didn’t expect that. 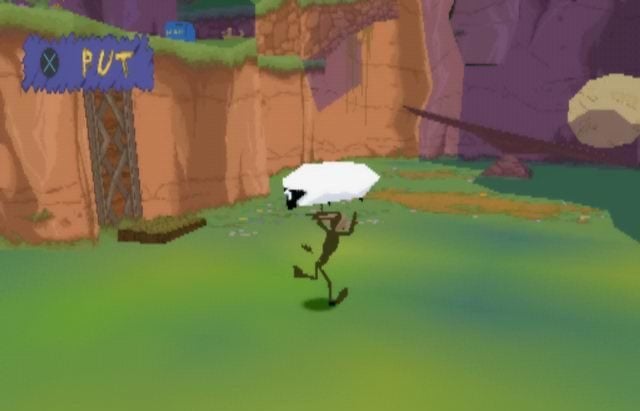 Infogrames-developed Looney Tunes games had a considerable presence in PS1’s library, but none can hold a candle to the immensely ambitious Sheep Raider, or as it was known outside of America, Sheep, Dog, ‘n’ Wolf.

While Infogrames’s Looney Tunes titles were generally action-based platformers, Sheep Raider instead incorporates strategy, stealth, and puzzle-solving into its gameplay. You play as Ralph Wolf, who is more or less a clone of Wile E. Coyote, and who, instead of chasing that pesky Roadrunner, spends his time trying to steal sheep from under the watchful eye of the brutish Sam Sheepdog. In Sheep Raider, you do just that, in a typically Acme-esque Looney Tunes way. But, the game is deceptively complicated and cerebral – something you might not expect from a tie-in licensed game of this type.

I doubt we’ll see this unknown game on the PlayStation Classic, not just because of its obscurity but due to its complicated licensed existence, especially since Infograme’s legal and financial plights. 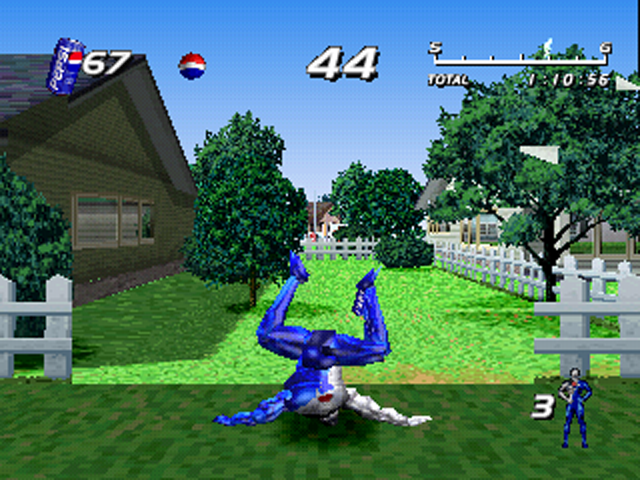 Way before the Internet discovered the living myth and legend that is the Japanese soft-drink mascot phenomenon, “Pepsiman“, I spent many a hours of my youth mesmerized by this surprisingly addictive game. Sure, my predilection for junk food mascots might make me a bit biased, but there’s no question that beyond his body-horror novelty and meme-status, Pepsiman’s own game is actually not all that bad.

An endless runner that would fit well today on a phone, Pepsiman is a challenging but short dash which has you going through suburbia, factories and down the hilly steeps of San Fransisco, all in an effort to bring the gift of Pepsi to the thirsty masses. The game has a few quirks, but it’s a timeless gem that unfortunately never saw a release outside of Japan, despite its English-language menus and voice acting (my childhood copy was actually a bootleg but don’t tell Pepsi).

The game has found its rightful place as a cult classic these days, but I highly doubt we’ll see Pepsi reviving this odd moment in their history on the PlayStation Classic. 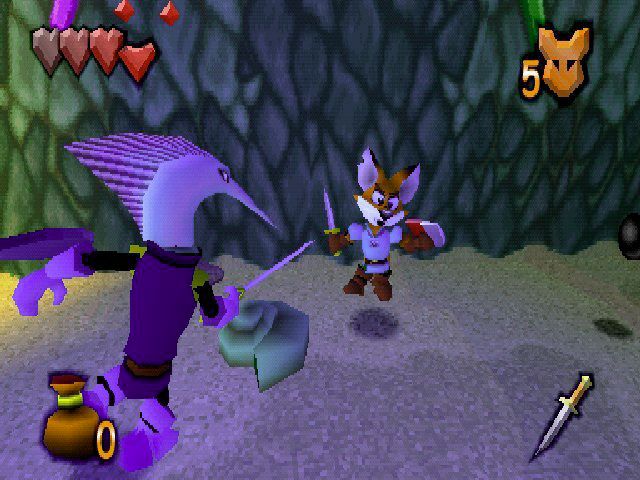 Kingsley’s Adventure is easily the most criminally overlooked game in the entire PlayStation library, and one of the biggest hidden gems of 90s video games in general, developed by Psygnosis (who also created Team Buddies).

Equally cute and funny, and dark and morbid in that early 3D game way, Kingsley’s Adventure might owe a lot to The Legend of Zelda as its base inspiration, but it manages to make the format its own, combining action, adventure, and platforming with a lively world full of dark dungeons full of creepy enemies and quaint towns inhabited by eccentric animal folk.

You play as a young fox, Kinglsey, a would-be knight on a quest to save the Fruit Kingdom (yes, that’s what it’s called) from the tyranny of the villainous Bad Custard (yes, that’s what he’s called). Playing the game today, it has aged exceedingly well for its time and still manages to make me smile after all these years.

In my perfect world, Kingsley’s Adventure would be an obvious, popular choice to be included in the PlayStation Classic, but it’s simply not going to happen.

Do I even have to say it? Play this game if you haven’t. It’s waiting to be discovered, to reach a proper cult status one of these days.

Which games would you like to see added to the Playstation Classic but don’t think will make the cut? Do you hate me for not including LSD: Dream Emulator? Let me know in the comments.