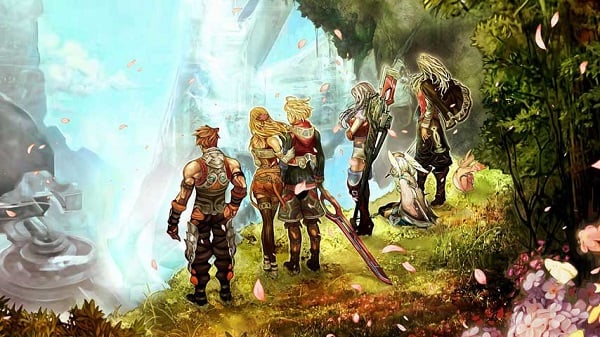 One of the great epic RPGs of the previous generation, and perhaps of all time, Xenoblade Chronicles is a game that’s staggering in its length and depth. Boasting a massive campaign, two huge open worlds and an absurdly daunting 500 side quests to complete, Xenoblade establishes itself very quickly as a game that will require a sizable investment of time and effort for anyone ambitious enough to tackle it. With that in mind, this is a game that has a lot of pressure to deliver when it comes to the finale.

Centrally, Xenoblade‘s plot concerns itself with a boy named Shulk who inherits a mystical sword known as the Monado (which also happens to be the titular Xenoblade). The setting of the game is made of two endlessly warring factions situated on a world of settlements which is built upon the frozen bodies of two eternally embattled giants, the Bionis and the Mechonis. The Bionis consists primarily of biological life forms, while the Mechonis is made up of robotic and machine-based sentient species that are constantly attacking the Bionis and it’s inhabitants. When the first attack in years leaves Shulk’s best friend violently murdered, he sets out with the machine-destroying Monado blade on a quest for vengeance and retribution.

Being a game that’s plot is filled with twists and turns, including the revelation of many characters’ turncoat allegiances and surprise mystical origins, Xenoblade sets a tempestuous, involving and intriguing course as it weaves its tale, one that only grows in depth and breadth as the curtain comes ever closer to wrapping things up for good. By the time the player has reached the ending for the main campaign alone, they will likely be skating the 80-100 hour mark, and as such will have a significant investment in terms of both the amount of time spent building up their party and the beefy elements of the story as it approaches its conclusion.

To get into the precise details of exactly who turns out to be a traitor/double agent, who has secret motivations, and who exactly these characters truly are would be tedious to the point of exhaustion, especially for a layman, but the final beats of the game, including some truly epic battles with foes who have been haunting and impeding you throughout the entire exhaustive journey, are endlessly satisfactory, and the final act twist that closes out the game is one of the most jaw-dropping left turns you’re likely to stumble upon in a game of this size and scope. In fact, the end game twist and its consequences are so dynamic and far-reaching that they literally force you to re-examine the entirety of how you see the narrative and its setting in every conceivable way.

Now, with Xenoblade Chronicles X out, the good folks over at Monolith Soft are faced with the unenviable task of following up one of the most acclaimed JRPGs of the last decade, while also branching and building off of a plot that is almost completely wrapped up in every way imaginable. What they will do to solve these unique problems remains to be seen, but with E3 just around the corner and a 2015 release on the burner, the wait to find out is only intensifying with each passing day. Can Xenoblade Chronicles X possibly match the quality of its forebear, and further, will its conclusion be as satisfyingly concrete as that of its predecessor? Only time will tell, but hopes are high for this particular writer.