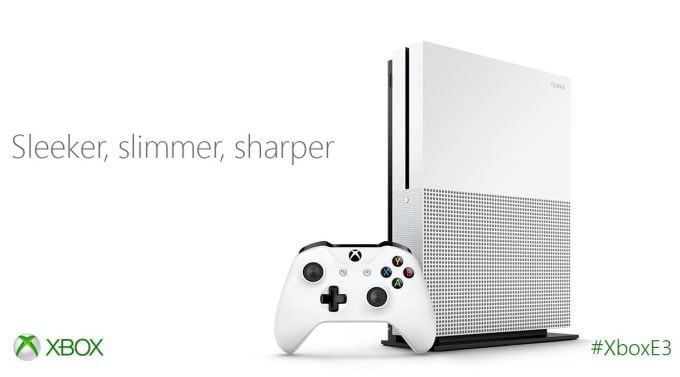 As of August 2nd, the original Xbox One model is no longer the only one.  Joining its ranks is the Xbox One S, a new model labeled “Sleeker.  Slimmer.  Sharper” by Microsoft.  That seems an appropriate description with the One S being forty percent smaller than the original model, including an internal power supply to reduce additional space for the already smaller box.  Additionally, the Xbox One S boasts up to two terabytes worth of storage, quadrupling the storage space of the original Xbox One.  The One S features High Dynamic Range to optimize the contrast between light and dark colors onscreen, resulting in a much sharper image.  Further, the new model utilizes 4K Ultra HD so that users can stream Netflix and Amazon Video in 4K or use Ultra HD Blu-rays in the disc drive.  The console also features an IR blaster and it’s controllers utilize Bluetooth technology meaning increased range and far simpler syncing.  Rightfully the size of the PS4, priced at $400 at its highest price point, and with more features than the previous model and its competitors, this is absolutely the superior Xbox One and the model to buy.  That’s all dandy, but with the announced Project Scorpio, projected to be the most powerful console to date, already slated to be coming out next year, the community has already been querying who this new model is for.  The answer lies within the “S.” The “S” in Xbox One S could conceivably stand for a number of things, Slim, Sleek, Sharp, Superior, Super, Super Saiyan God Super Saiyan, but undeniable is the relation to Apple’s iPhone models.  Each consecutive iPhone to come out is followed up by an “S” model, a trend that began with the iPhone 4S and has continued up through the 6S, marked by enhanced features compared to its predecessor, but not enough to distinguish it as a new generation and numbering.  This is absolutely (appleutely?) the case with the One S.  From the OS to the software, the Xbox One S is still an Xbox One, only displaying a few distinguishing features.  In their E3 press conference, when the Scorpio was properly announced, Microsoft said much the same, calling the One, the S, and Project Scorpio a family.  All are the same console, however, each consecutive model features extended capabilities.  And, while the consoles and games on them may look different, in the end of the day, they’re still the same games.  Further, and again not unlike the iPhone market, the price of the Xbox One S varies depending on the hard drive size, ranging from $300 for 500GBs of space to $400 for 2TBs. Microsoft is offering potential buyers a multitude of different console models, down to the hard drive, not unlike how the mobile market presents phones.  Consequently, consumers can make a selection in console that best corresponds with how they intend to use it and their needs.  Rather than forcing everyone to buy the most expensive, feature heavy hardware, including features that will go unused or unnoticed by a more casual audience, potential purchasers can opt for a simpler, perfectly capable machine that does exactly what they want it to.  Television enthusiasts and cinephiles might best benefit from the 4K capable Xbox One S, while in-game graphic enthusiasts will undoubtedly enjoy the more powerful computing machine Project Scorpio is slated to be.

More purchasing options and a more tailored experience is never a bad thing, especially concerning expensive pieces of hardware.  Its a trend not entirely unprecedented within the gaming world as, most notably, Nintendo’s portable consoles have a history of half-generation model variations that goes back to the first Nintendo portable console, the Game Boy, and its jump to the Game Boy Pocket.  Much more recently, the current Nintendo portable, the Nintendo 3DS, made the leap to the New Nintendo 3DS model as yet another example.  Hopefully, down the line, all purchasing options are made available at the outset of the console, but it’s worth noting that Microsoft is allegedly working on an upgrade program so that initial purchasers of the Xbox One can easily and inexpensively upgrade to a more powerful machine.  While it might be worth the wait for gaming enthusiasts to see the finalized specs of the still unnamed Project Scorpio before upgrading, for interested individuals who’ve yet to buy an Xbox One and already enjoy or are moving toward a 4K capable television set, the Xbox One S is everything its being advertised as: sleeker and slimmer than the original model, 4K streaming ready, and boasting a polished HDR presentation ideal for a sharp, clean viewing experience while gaming, streaming, or watching the immense amount of content available on the machine.  Hopefully the anticipated Project Scorpio and Sony PlayStation NEO can carry on this new trend of a rich and varied market of home consoles allowing gamers and viewers to buy into the best experience for their homes.