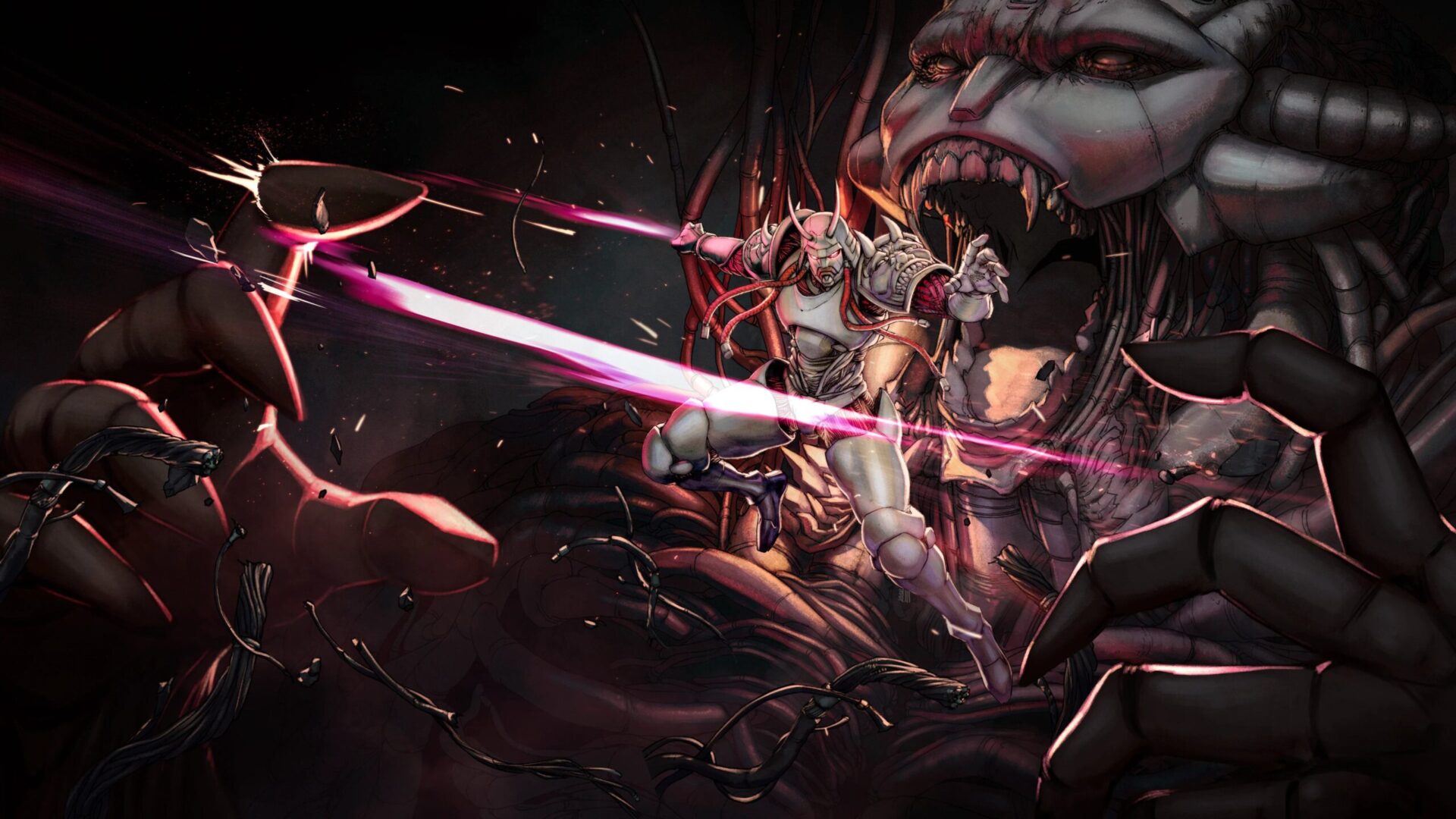 We’ve had an abundance of memorable ninja games over the years, but recently, there’s been a distinct lack of robot ninja games. Thankfully, now we have Vengeful Guardian: Moonrider. After giving fans what Konami couldn’t with the excellent Contra-inspired action title Blazing Chrome, developer JoyMasher has now set their sights on new retro horizons: reviving the 2D action platformer as exemplified by classics like Shinobi and Strider. The result, Vengeful Guardian: Moonrider, is just about as loyal to the classics as one could ask for: equally demanding and satisfying, Moonrider overcomes a handful of rough edges to deliver a worthwhile, modern reinvention of old-school action.

The setup is just about as 80s action movie-inspired as a game like this should be. An authoritarian regime has taken control, brutally maintaining its power with an army of cybernetic supersoldiers. However, one of these dictators’ latest creations, the robot ninja warrior known simply as the Moonrider, goes rogue. Instead of upholding the totalitarian regime, the Moonrider bursts out of its lab, kills the soldiers and scientists watching over it, and embarks on a quest to take down the ringleaders behind this oppressive global state.

Players take control of the Moonrider at this point in the story, and the real fun begins. Vengeful Guardian: Moonrider is a tribute to classic 16-bit 2D action titles in every sense of the phrase, drawing clear inspiration from the genre classics on the Super Nintendo and Sega Genesis: you can expect to run to the right, overcome some platforming challenges, and slaughter a series of soldiers, robots, monsters, and everything in between. Even the overall structure pays tribute to classic Mega Man X: as in Capcom’s classic platformers, Moonrider lets you play its eight main levels in any order you choose, and after defeating each level’s boss, you’re granted a permanent upgrade that can be used in subsequent levels.

Retro-inspired as it may be, Vengeful Guardian: Moonrider is certainly not purely derivative. Instead, JoyMasher takes these tried-and-true formulas and ideas and uses them as the basis for a series of extremely unique level ideas. Each level feels completely unique, offering a markedly different gameplay experience than the rest. One level might have you soaring through the sky, leaping from plane to plane, while another might adopt a completely different gameplay style in a pseudo-F-Zero-style chase sequence as you ride your motorcycle in pursuit of an escaping foe. Each level is its own unique experience posing distinct challenges unlike anything else in the game, and the process of discovering what each level would entail both in terms of its setting and its gameplay ideas is easily one of Moonrider’s strongest perks.

The character customizability also helps Moonrider stand out from its predecessors. Hidden away in each level are special chips that can be slotted onto your character, allowing you to gain additional abilities or status boosts like double jumps, reduced damage, or regenerating skill points. These chips not only add a good incentive for exploring each level, but they also provide ample opportunity to customize Moonrider to your own unique playstyle. That’s not to mention the unique items that can be gained after beating each boss, which run the gamut from your typical shuriken and fireballs to the ability to summon demon tentacles from other dimensions—yes, it’s as cool as it sounds. Between items and upgrades,Vengeful Guardian: Moonrider provides some much-appreciated adaptability to make each level’s ample challenges feel manageable.

And rest assured, the difficulty level is one area where Moonrider wholeheartedly embraces its retro inspirations. This is, to massively understate it, a challenging game. I died dozens of times on my first playthrough of the roughly two-hour-long campaign, and that’s only a low estimate. The game is fairly generous with extra lives and health replenishment throughout each level, but even then, it’s easy to get overwhelmed by its onslaught of enemies and unforgiving platforming obstacles. Even simple grunts can deal significant damage—and if the constant barrage of close- and long-range enemy attacks don’t take your life, then the many spikes, bottomless pits, and lasers that are strewn through each area certainly will. Suffice it to say, if you simply run through each level with your katana blazing, you’ll have a quick introduction to the game over screen.

Crucially, as hard as the game can be, Vengeful Guardian: Moonrider rarely felt unfair during my time with it. Sure, perhaps this humble reviewer lost dozens of lives, but I was never under the illusion that those lost lives were the fault of anything other than myself. The controls, barring a handful of items with finicky timing and trajectory, are routinely reliable, such that it feels manageable to acquire a mastery of the game’s controls. Yet unlike many old-school action titles, the challenge is paired with player-friendly conveniences: checkpoints are frequent, there are plentiful items in each level to replenish health and extra lives, and some game-overs don’t even make you restart the entire level. These quality-of-life improvements make the satisfaction of finishing a level that much sweeter.

With the moment-to-moment gameplay being as strong as it is, it’s a shame that the overarching plot is not on par. The main premise is solid, but the story throughout the rest of the game feels inconsequential at best–we know that the authoritarian rulers are evil, but definite details are hard to come by in the game’s comic-book panel cutscenes or pre-boss-battle conversations. The writing is also inconsistent, with a handful of grammar errors and some strange dialogue (Moonrider straight-up admitting “I don’t even know why I’m here” when talking to a boss pre-battle is jarring, to say the least). This lack of details makes the game’s conclusion come out of nowhere–slaying the final boss doesn’t mean much when you don’t even know why you’re fighting them. Of course, this is an action game, where the story takes a backseat while the gameplay drives the experience, and the adrenaline-pumping gameplay more than makes up for Moonrider’s narrative shortcomings.

Moonrider plays like a retro action title, and it looks the part, too. Its gritty dystopian world is filled with broken landscapes, futuristic skylines, and dilapidated factories, all rendered in a striking pixelated style. The graphics take after 16-bit titles like Contra 3 and Shinobi III while far surpassing the technical limitations of those titles’ original hardware, with deep colors and advanced visual effects demonstrated throughout. Enemies burst in spurts of blood when beaten, environments change dynamically throughout the level, and many bosses fill the entire screen, to give just a few examples of the game’s visual ambition. Pair all this with a pulsing soundtrack that mixes EDM with East Asian-inspired instrumentation, and the presentation excellently complements the gameplay.

They’ve done it again: with Vengeful Guardian: Moonrider, JoyMasher has recaptured the addictive loop of adrenaline, frustration, and eventual triumph that made the classic 2D action games of the 80s and 90s so hard to put down. With the retro cruelty dialed back thanks to some welcome quality-of-life improvements, Moonrider also makes this classic gameplay style accessible to wider audiences, without compromising its difficulty. The story may disappoint, but where it matters most, Moonrider succeeds–this is a challenging, yet ultimately deeply rewarding, take on a beloved genre. Vengeful Guardian: Moonrider shows that vengeance truly can be worthwhile.