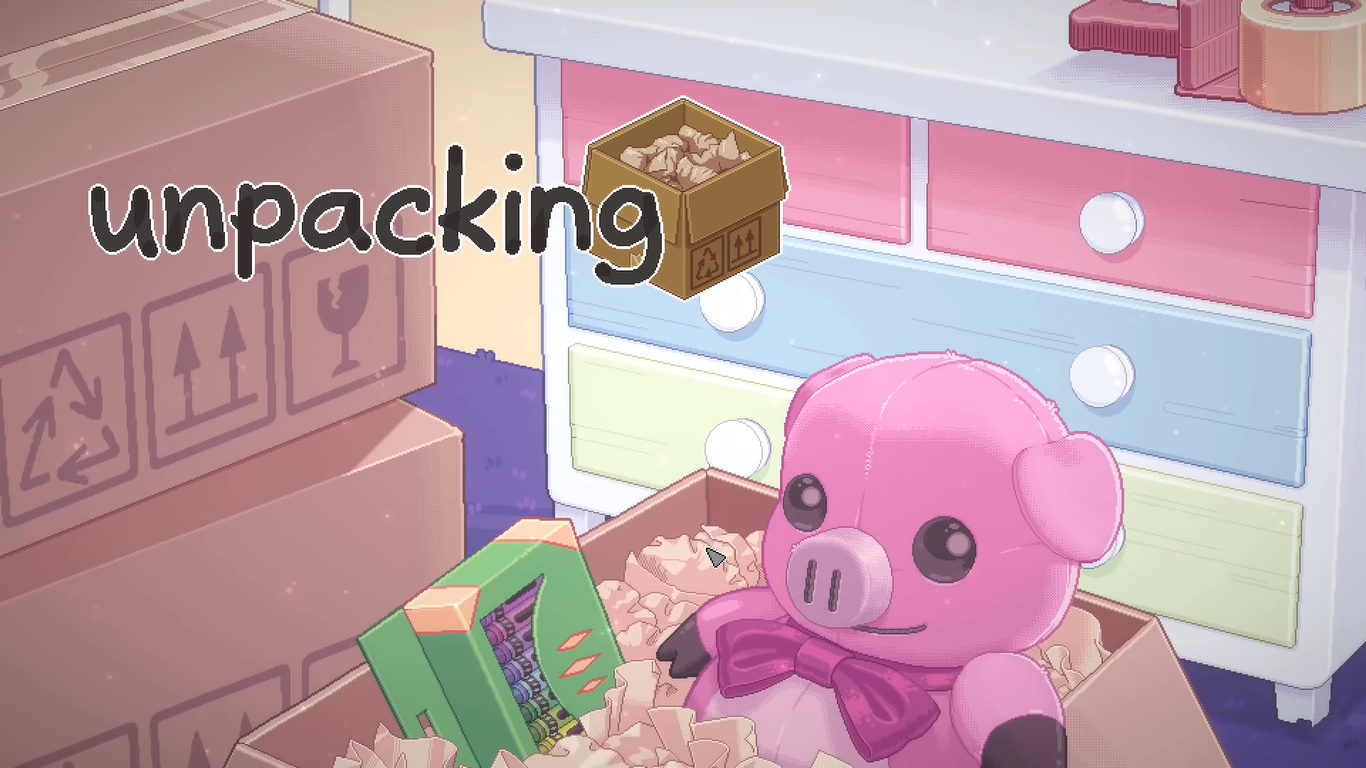 A game about unpacking and discovering life in the process…

Meditation is the decluttering of your mind, and the process of cleaning is a powerful form of meditation. One’s living space is an extension of the self, and if one wants a clean and calm mind, one must inhabit a clean space.

It is this extension of ourselves that 2021’s Unpacking reveals through its environmental storytelling and our own actions within it.

Our self is revealed in our personal spaces by the objects we keep, where they are kept, the way they are organized, what’s on display, how it’s displayed and what’s hidden away. It’s the things in our medicine cabinet and what fills our fridge. It’s the way an old, expired cream stays put for years “just in case”, how the fridge is organized into distinct sections, or how it is a pile of things with Tupperware tombs of mold.

Unpacking follows an unnamed woman from 1997 to 2018, through many stages of her life and the homes she makes for herself. While she journeys from her room as a ten-year-old child, to her first college residence, and beyond, players are tasked with unpacking moving-boxes and organizing the contents within the room. It is a calm and relaxing experience focused on simply putting objects on shelves and in drawers, creating a living space that reveals not only the character’s self but our own.

While there are no cutscenes and the character and those close to her are never seen, by inhabiting this space, you get an understanding of who she is and what she goes through in life. As a child, she seems to have a variety of art supplies, a dreidel, a stuffed pig, and a soccer trophy. In school, her art supplies seem to grow in number and while she leaves behind many stuffed animals, she brings the pig with her. When she graduates, she has an art tablet and a little holder for business cards as she pursues her career, some climbing equipment and again the pig. She moves in with a partner who has a small apartment. Its monochrome grey and modern sensibilities clash with her bright and playful belongings. The partner leaves barely any room for her belongings, making it challenging to find places for her things and forcing her to hide her framed diploma away under the bed. It’s not surprising when she moves home, breaking up with someone who made no effort to merge their space with their partner. To share themselves with their partner.

Her climbing gear is replaced with pills and a cane perhaps from an accident climbing, job awards begin to appear on shelves and her haphazard packing style even becomes much more orderly, all the while, her pink pig remains.

We never meet her, but by the end of this journey, we know her.

What we glimpse in ourselves is how we go about assisting in the task. If we try to organize meticulously, placing books on shelves by size or colour, or if we toss things wherever they fit. If we move items one at a time or drag them all out first and then organize. Over time the line blurs and the player may set up the room for the lead’s benefit, placing her art supplies conveniently for work and achievements proudly on display.

Organizing and cleaning can help reduce anxiety, improve focus, and give a sense of satisfaction and order. “In general, it was about creating order out of chaos,” said creator, Wren Briar on Unpacking’s genesis. During stressful times, having some semblance of control can ease negative emotions.

A study by researchers at Princeton University discovered that clutter makes it difficult for one to focus on tasks and thus be present in a moment, due to the overwhelming nature of a cluttered space on the visual cortex.

The act of cleaning, organizing, and moving is often seen as a negative one. Many avoid it by paying others to do the task for them. Its negative connotation comes from it being perceived as a chore that is in the way of the thing one really wants to do. However, if we focus on the after, we are not present in the moment.

Thich Nhat Hanh wrote “If while washing dishes, we think only of the cup of tea that awaits us, thus hurrying to get the dishes out of the way as if they were a nuisance, then we are not ‘washing the dishes to wash the dishes.’ What’s more, we are not alive during the time we are washing the dishes. In fact, we are completely incapable of realizing the miracle of life while standing at the sink. If we can’t wash the dishes, the chances are we won’t be able to drink our tea either. While drinking the cup of tea, we will only be thinking of other things, barely aware of the cup in our hands. Thus, we are sucked away into the future—and we are incapable of actually living one minute of life.”

Unpacking takes us on a journey through milestones of our life and it’s in these snapshots that we are present. It is about the moment. A past behind us, a new future of opportunities, but in the present, there is only the joy of unpacking.

Geordi fell in love with storytelling when he was just four years old. Watching movies that kids maybe shouldn’t, reading books with too many big words, and exploring new worlds on his NES and SNES, he found his passion. Left with a deep empathy for countless worlds and all who inhabited them, he pursued not only media, but firefighting, much to the confusion of his teachers. When he is not consuming every film, book, and game he can get his eyes on, he’s writing about them… and perhaps making his own.