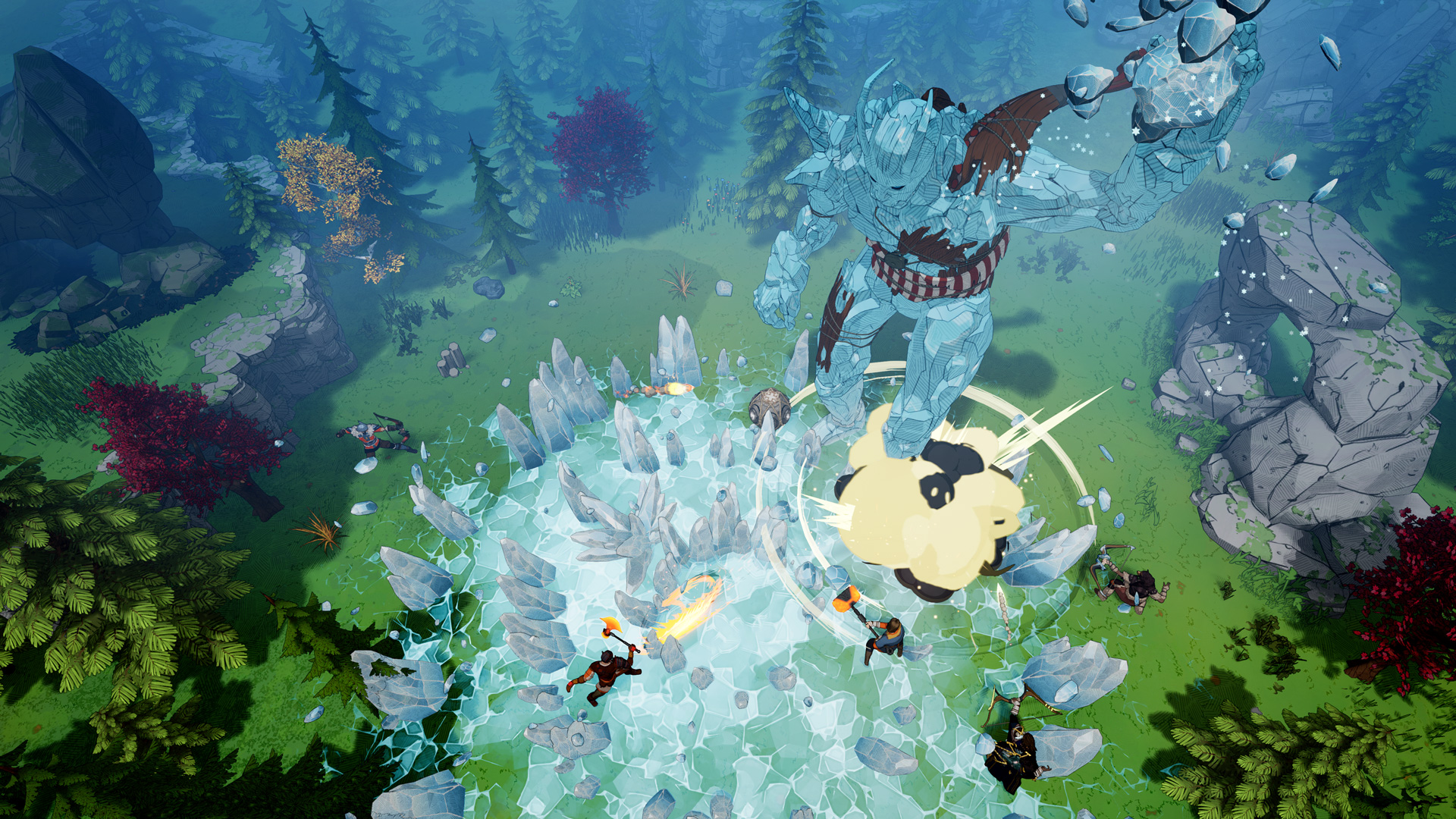 The colorful, vibrant aesthetic of Tribes of Midgard betrays the game’s unrelenting constraints on players as they try to prevent the end of the world. Norsfell Games have crafted an accessible but quickly punishing experience that only truly finds its footing when everyone works together. It is easier said than done, despite the game’s clear objectives and relatively streamlined resource management for a survival game that captures the last-ditch efforts of Vikings to save Midgard.

After going through a quick tutorial, players will have already taken on a Jotun (otherwise known as giants in Norse mythology) and established the stakes of every future session in Tribes of Midgard. Ragnarok is at hand and, as the last remaining Vikings, players are forced to come together in a small village and protect the Seed of Yggdrasil from the nightly onslaught of Helthings. Fail to do so, and the world ends.

The likelihood of saving the world also rarely looks good from your perspective, especially when initially beginning to play the game. You are almost naked with no weapons or tools to do anything helpful to save Midgard. The beginning of a session can involve spending the entire first day just getting the necessary tools to scavenge resources and then weapons to fend off the Helthings and explore the world. Fortunately, it does not take long for Tribes of Midgard to at least let players choose between beginning with either a pickaxe and axe, or a full set of basic armor and sword to cut down on time spent trying to find branches and flint.

The first day is when players are stepping on each other’s toes most, and propositions the game as less of a team-oriented effort than it actually is. Sometimes you end up forced to stray too far from home to find even the most basic resources for crafting essential items before you’re even ready to venture out in the wilds of Midgard. There is not really any way around it besides just giving the player the resources needed right out of the gate, but when multiplayer matches are often without verbal communication, it’s easy to get frustrated with other players when you don’t know what they’re game plan is.

Of course, you can always play Tribes of Midgard alone and the difficulty is lower than if you are playing online. However, it can get pretty tedious, and there’s an even more isolated feeling that this world will not exist without you. There are no allies also out collecting resources, instead, it is just the player trying to multitask different resource collections in order to properly upgrade your village so you can access stronger and more helpful tools, weapons, and armor. Playing a few sessions of the game by myself only reinforced the weaknesses of Tribes of Midgard.

The real magic is when players work together efficiently to fortify their village and explore the randomly generated map for resources as they clear objectives. Those objectives are usually building a bridge or path to another area while defending the village at night. Shrines around the world allow for fast travel between points, as well as a handy rune that has a hefty cooldown but will instantly teleport you back to your village if you can’t get to a shrine in time.

Tribes of Midgard’s greatest strength is the cooperation of players. If there are only a couple of players who seem to know what they are doing, it makes all the difference. Some sessions can feel like no one is pulling their weight, struggling to even protect the village at night, and that’s usually due to players expecting others to do the task while they slay a Jotun or gather the resources they need to improve their character. Tribes of Midgard is a game about multitasking that expects players to understand how to prioritize. However, too frequently players will run into games where someone is just improving themselves while the rest of the group struggles to keep the Seed of Yggdrasil alive.

It’s the aspects of your village that have an effect on both the team and the individual that help shepherd players towards a common goal. While there is a consistent objective, players who want to be able to progress will need to beef up their own stats through collecting souls — the primary currency of the game which can be obtained from killing enemies to cutting down trees — to upgrade armorers and blacksmiths in camp in order to make better gear available to them. So even the most selfish player is still forced to help a little bit. There is even a communal chest where players can pool resources that other players can pull from and increase whatever needs increasing.

When that chest is being used by multiple players is when Tribes of Midgard achieves harmony between the gameplay and the narrative surrounding it. It’s the end of the world, but some players play like it’s just another session and the expectation is that you will always lose, not that there’s a chance you might survive. Rarely did I have that feeling that everyone knew what needed to be done and were working towards the same goal every day. The village would get slightly destroyed but players would reinforce walls and place traps to prepare for the next night. Then they continue on building the next stepping stone to saving the world.

The only time when Tribes of Midgard throws a wrench in the daily grind is with Jotuns. The giants of Midgard are elemental-based and are essentially tanks with how much damage they can deal and take. They’re extremely slow-moving but when they spawn on the map players may have a day or two before it’s urgent to focus all their energy on it before it reaches the village. Once a Jotun reaches a village and it’s not already been damaged significantly, you can most likely kiss your session goodbye. It’s an interesting wrinkle and due to the significant rewards from defeating a Jotun, it’s understandable that players rightfully emphasize attacking them over all other goals. It can take a couple of days to take one down, especially near the end-game where you are juggling constant Helthing attacks on the village and an approaching Jotun ready to ruin all the progress you have made.

Variety is a welcome breather in Tribes of Midgard but even that ends up feeling a little repetitive at times, especially when some of the variety is crucial to completing objectives. World events happen on the map such as the Roosters of Ragnarok where you chase and capture roosters in a specific area of the map, or the World Deer Stag that roams a small area waiting to be communed with and provide a bonus. However, these world events aren’t frequent enough and players may honestly not understand some of the currency and items they receive from it and why it’s so important until they get closer to finishing the game’s Saga mode and experience one of the final objectives.

The problems that arise with the game is that it’s repetitive, sessions can go on for a long time, and unless you’ve made it through a significant portion of the match before, you may not understand what you actually need to do outside of protecting the Seed of Yggdrasil. How do you win a game? The main objectives point you in the direction, but it is very unclear what that final objective is until you get there. Without people who know what they’re doing, it’s easy to get deterred from actually completing the Saga mode because everything feels so obtuse, despite it leading players by the hand.

Tribes of Midgard isn’t exactly kind to newcomers and especially those with limited time on their hands. Whenever I had a really good match going, it was long, but the benefit is that a good match can be long and not feel like it because of the adrenalin and momentum from a team working together and actually making progress. The biggest issue is that Tribes of Midgard does not invite players to continue playing a single session, instead encouraging many to fall off after beating their first Jotun and take their reward through the Bifrost which just allows them to leave early. Your session might not be the player’s focus, and if things look like they’re not going to go well (for example, players seemingly not understanding how to play the game or the Seed of Yggdrasil already on the cusp of destruction), there’s no reason for players to stick with the session. They get to keep certain items that can help with their next game, instead of losing it all trying to keep things going for everyone else.

Ultimately, that is where Tribes of Midgard fails as a multiplayer survival game. In order to survive, players have to work together, but the game lets players abandon others in order to benefit themselves. Yes, the benefits might be better if the player stayed, but there’s hardly any indication of why it would be better. The Tutorial for players even ends once the Bifrost appears, encouraging players to take it once they beat a Jotun. Everything will be fine now, right? The player survived what appears to be the biggest threat because they don’t have any idea what threat could be worse.

The repetition of fighting a Jotun again only further accentuates that maybe there’s nothing more down this road. Why continue playing when the worst threat you had was only trumped by another Jotun that just happened to be stronger and more resilient. The encounter wasn’t radically different, it just had a few different attack patterns, but the Bifrost is always there to take you out of the game with the items you need to progress for your next session.

There is an interesting dichotomy created by the split between adventure and survival game. There’s a repetition inherent to survival games that must be adhered to, but it also has to have a sense of progression and that what you’re doing matters. By creating constraints on the player through nightly attacks that are increasingly more difficult, it pushes players to spend their time during the day more wisely if they want to keep up with the constantly increasing threat of world destruction. In a multiplayer session, it usually works to capture that balance of urgency and progression, so long as everyone can commit to the conceit.

There is just too much roughness around the edges and the tutorial does not really emphasize the escalation of the threat to Midgard during a session. The number of players I would see jump out of a game the moment the Jotun would be defeated was not astronomical but even one player leaving hurts morale. Does that player know that they’re supposed to be working as a team towards a common goal? Or do they believe everyone has a personal goal they’re trying to meet before they escape via the Bifrost? The fact that this is even a question is largely why Tribes of Midgard’s greatest triumphs are still few and far between and why every session feels doomed.